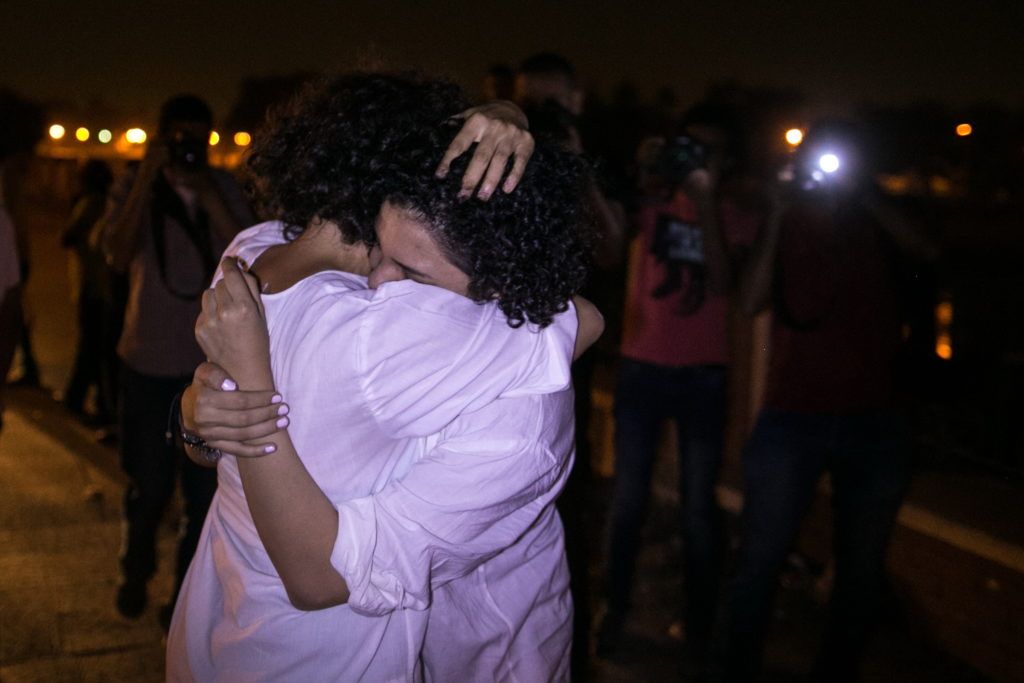 President Abdel Fattal al-Sisi has pardoned 100 young people serving time for charges including violating the protest law, the president’s Facebook page announced on Wednesday. The pardon comes the day before Sisi departs for New York to meet with the United Nations General Assembly.

As of Wednesday evening, several high-profile activists and journalists incarcerated for what many call politically motivated charges were headed home. A Mada Masr journalist at Qanater Women’s Prison reported that activists Yara Sallam and Sanaa Seif had been released. Earlier in the day, reporters said Al Jazeera English staffers Mohamed Fahmy and Baher Mohamed, alongside co-defendant Shady Abdel Hamid (a student), had been freed from Tora Prison.

Families began gathering outside the prisons to wait for their loved ones after news of the pardon circulated.

Mohamed Bassal, the presidency correspondent for the privately owned Al-Shorouk newspaper, reported this afternoon that prisoners convicted in several controversial cases, including the “Shura Council protests” case and the “Ettehadiya Presidential Palace clashes” case, were among the pardoned. Bassal said he saw release orders for several of the defendants.

Fahmy, Mohamed and Abdel Hamid had been sentenced to three years of maximum security prison last August in the internationally condemned “Al Jazeera English” case. Two students were among the defendants in the case, but their names do not appear on the list, according to Bassal.

Sallam and Seif were released along with 20 other people who were serving time for protesting near the Ettehadiya Presidential Palace in June 2014. A total of 23 defendants were sentenced to two years in prison and two years probation in December 2014.

Another 18 inmates implicated in the “Shura Council protest” case are also slated for release, but their names were not disclosed in the decree. The 21 defendants in this case were sentenced to three to five years in prison, and include prominent activist Alaa Abd El Fattah.

Activists accused of assaulting police forces near Alexandria’s Al-Raml station when they were protesting police assaults were also listed among those pardoned, according to Bassal. In this case, 10 defendants, including prominent activist Mahinour al-Massry, were sentenced to two years in prison in February 2015. Her name is not included on the list, however, while that of poet Omar Hazeq is.

The information shared by Al-Shorouk was published by a number of state-owned media outlets, including Al-Ahram’s website and state television.

Families of some of the defendants told Mada Masr early Wednesday afternoon that they initially received the news with caution, as this is not the first time some of them have been promised the release of their loved ones. Similar news circulated during Eid al-Fitr in July, with names of some of the same defendants listed in that rumored pardon. The false news was widely circulated and attributed to official bodies.

The Prisons Authority routinely issues pardons on the occasion of Eid.

According to an email the president’s office sent to journalists, “This new batch of releases comes in the context of the president’s initiative to pardon a group of youth, announced last December.”

Mokhtar Hamdan, a lawyer with the Association for Freedom of Thought and Expression, was part of the defense team in the Ettehadiya case. Early Wednesday afternoon, he told Mada Masr that the Prisons Authority was already notified of the decree, which was then sent to the different prisons where the concerned defendants are serving their sentences.

“This means that the only remaining step is to release them,” he said. “There are no other bureaucratic procedures.”

Hamdan added that the pardoned inmates have already served two-thirds of their prison terms, which is why defendants such as Abd El Fattah, who was sentenced to five years in jail, were not included on the list.

While the Prisons Authority can pardon those who have served over two-thirds of their sentences, political prisoners must be pardoned by the president.