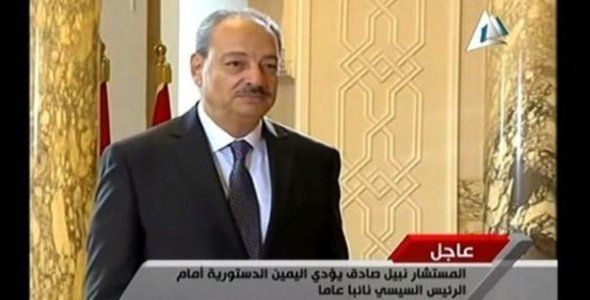 Sadek was sworn in Saturday morning, and will hold the position for four years. He comes to office following the assassination of his predecessor, Hesham Barakat, who was killed in a car bombing in June, 2015.

Presidential spokesperson Alaa Youssef stated that after Sadek was sworn in, he met with Sisi to discuss the role of the public prosecution’s office, reported the state-owned Al-Ahram. Youssef said that Sisi and Sadek both emphasized that effort would be needed from all state bodies during these difficult times, particularly from the judiciary, so that justice, law enforcement and the rights of citizens can be upheld.

Sadek then met with members of the Supreme Judicial Council at the High Court, who reportedly wished him success in his new role.

Sadek is a former police officer who graduated from the Police Academy in 1976, before leaving the police service to join the judiciary a few years later.

An anonymous judicial source told Mada Masr that Sadek is the least well-known of the candidates who could have been selected for office.

“The most important era of his life will be the future, not the past,” said the source. “He is not famous, there are many more famous judges who were nominated for the post, such as Adel al-Saeed and Zakareya Abdel Aziz Othman.”

The source stated that Saeed, who is a former spokesperson for the prosecutor general’s office, was supported by Justice Minister Ahmed al-Zend.

However, the source speculated that Sadek was chosen instead of Othman and Saeed for his close ties with the leadership of the Cassation Court. The source believes that the president wishes to maintain a close relationship with the court, and that other choices may have been more controversial than Sadek.

The source further stated that Sadek is known as a respectful man with good relationships with other members of the judiciary.

The Cassation Court was responsible for reinstating Barakat, who previously served as the prosecutor general under former President Hosni Mubarak, following Morsi’s ouster in 2013.

Sadek’s appointment came on the same day as the appointment of the new Cabinet at the helm of the new Prime Minister Sherif Ismail. The former Cabinet, under the leadership of former Prime Minister Ibrahim Mehleb, resigned last week amid a flurry of corruption allegations against its ministers.