Art attacks! The extraterrestrial experience of The Gifted Painter

The Bride is second from left.
By
Jonathan Guyer

What is the role of the artist in Egyptian society? This provocation has many answers, and has led me to interviews with painters at cafes and in their studios, to art openings and debates in the local press. So when I notice a downtown theater is hosting a play entitled The Gifted Painter by Zine Nasser, I’m thrilled.

Distracted as I am by the play’s title, I don’t read the not-so-fine print. Returning a week later to attend, I realize I am at the Ministry of Culture’s National Theater for Children.

A life-size Gamal Abdel Nasser (smiling) and Anwar Sadat (saluting) greet the children at the theater’s entrance. Below the two great leaders in a circular frame is President Sisi. “May Our Lord Protect You, Son, and May He Bless You,” reads the text above the presidential collage. On the surrounding walls are murals of Snow White and generic cartoon characters copied and pasted from Disney and Warner Brothers. Around the corner, rendered on the walls are large colorful clowns and bears wearing bowties, perhaps pieces of old sets. Adults smoke cigarettes in a sparse cafe where popcorn pops. 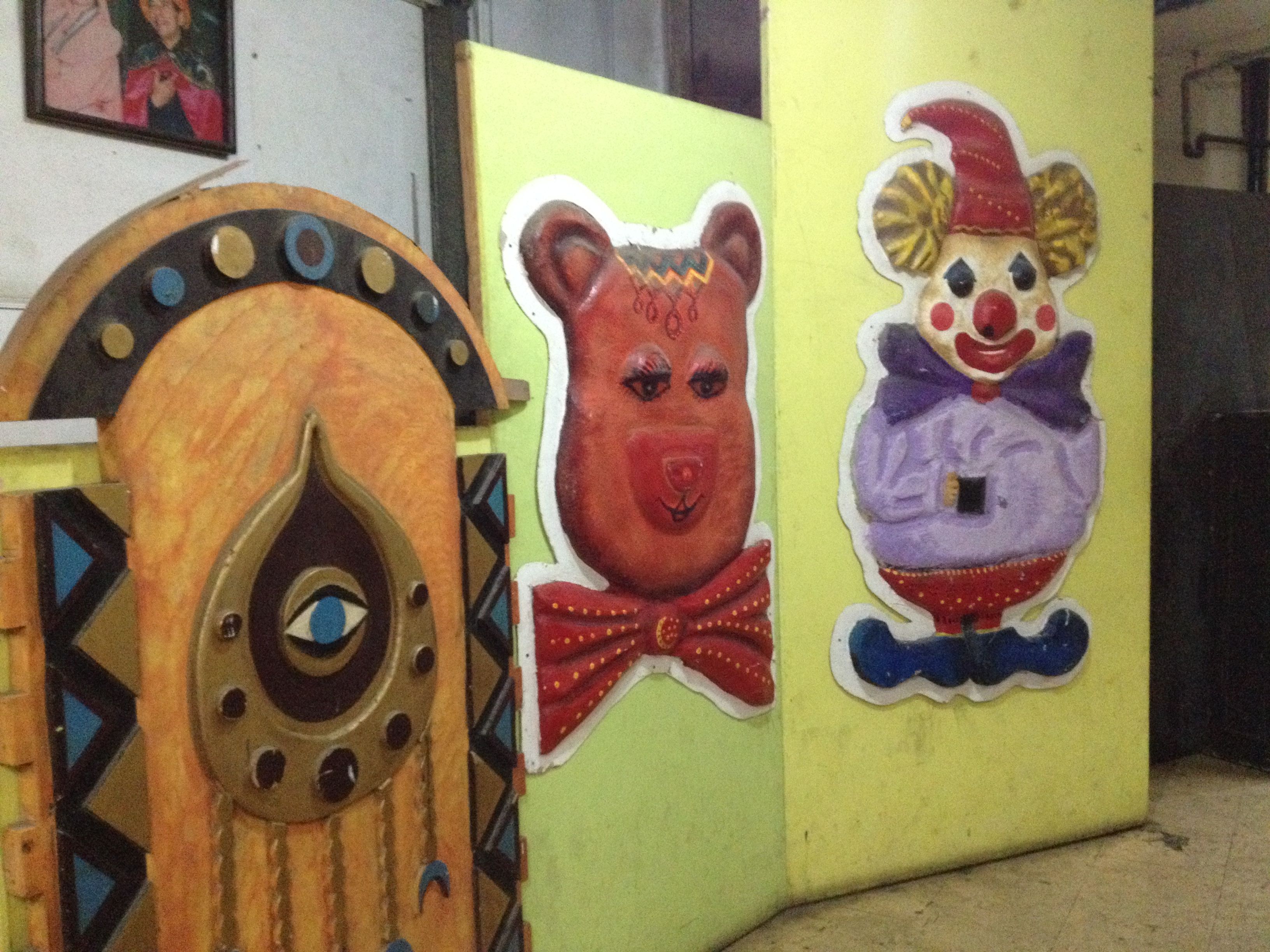 Middle-aged ushers in bright button-down shirts lead young audience members to their seats. The production begins with all rising for the national anthem. Then a troop of children in white shirts and grey pants or skirts pep up the crowd with a song.

The play’s first scene introduces us to Shady, a young boy who loves to paint. Shady paints a little alien, who looks like the love child of E.T. and Dr. Zaius. Shady calls her the Bride. Shady’s father works at a plant that produces children’s toys, and like any good father, he steals his son’s idea and designs a furry doll of the Bride. When the toy wins an award, the stage lights up with a musical number. The chorus of dancing children in furry or famous costumes (rabbit, tiger, bear, elephant, Mickey Mouse, Spiderman) and the alien Bride all celebrate together. Then the owner of the toy plant fires Shady’s dad because he hates the Bride stuffed animal.

But wait — was that dancing Bride just a toy or a real extraterrestrial?

I did not expect the play’s plot to involve Martians — or in fact Jovians, the proper name for extraterrestrials from Jupiter. But it does. Aliens descend to planet Earth to snatch Shady’s painting of the Bride. An alien disguised as a man in a tunic comes looking for the boy and his artwork. The police appear at Shady’s home to investigate but they are utterly incompetent. A throng of dancing burglars steals into Shady’s home and beats up Shady and his mother, though they can’t find the painting they are looking for. 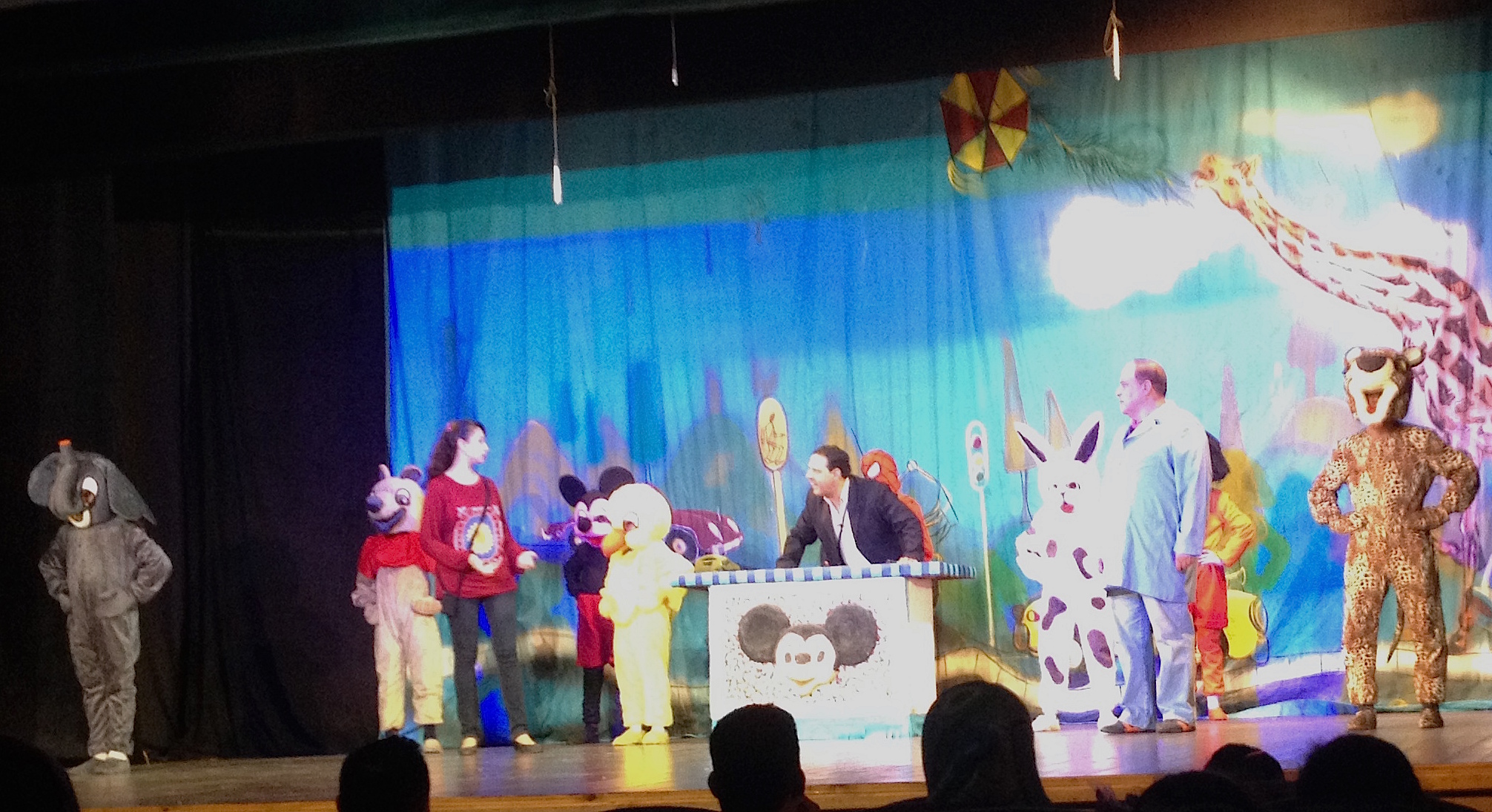 Aspects of the production are very strong. I’m especially impressed with the clever use of sound effects, notably the compelling computerized noises when aliens arrive onto the set. The unpretentious costumes — Shady’s hipster jeans, his mother’s nightgown, the burglars’ matching slacks — give the play an unexpected sense of believability for such a fantastical experience. The props add dynamism. An elevator allows humans and aliens to travel between planets; despite its simple construction, it looks very convincing on stage, enhanced by bright lighting and a digital keyboard. At one point, a gun appears on the set — it is almost too real, and would have scared me as a young child.

Yet I wonder what the play says about the state of art and the work of artists. On the surface, The Gifted Painter — the young lead, Shady — is misunderstood by his parents yet beloved for the aliens. After Shady’s interplanetary journey, in the second act, my impression is that artists alone are able to understand space beings; only does the painter have the capacity to transcend society’s prejudice against aliens and actually connect with them. Indeed, Shady uncovers the immense beauty of the alien bride in his brushstrokes — while other earthlings scoff at his illustration as make-believe.

One could just as easily interpret this play as an admonition to the artist, the out-of-touch creator, the aloof beatnik with a head in the clouds. One might argue that Shady’s concept of beauty is wrong and backward — to the rest of the characters, glaringly so, to the point that only aliens connect with his expression of the beautiful. I discount this reading, however, given the amount of song and dance that brings together the cast in celebration of the young artist.

This play is about the artist’s ability to see beyond the status quo — beyond Mickey Mouse and Spiderman — and to reach into new worlds, to create toys that look rather hair-raising and challenge mainstream conceptions of beauty. Most surprising: despite the yeti-like Jovians and the creepy thieves, I scantly hear a sob from the tykes in the audience. In fact, all of the kids joyously jump on stage for the final musical number, as their parents snap photos of them with the cast. This author wonders how many of these children will now want to become painters when they grow up. But such an inquiry is outside of the scope of this theater review.

The Talented Painter showed at the National Theater for Children in August, and may be reprised during Eid al-Adha. 6 Twenty-Sixth of July Street, Halim Square (facing KFC), Attaba, Cairo. 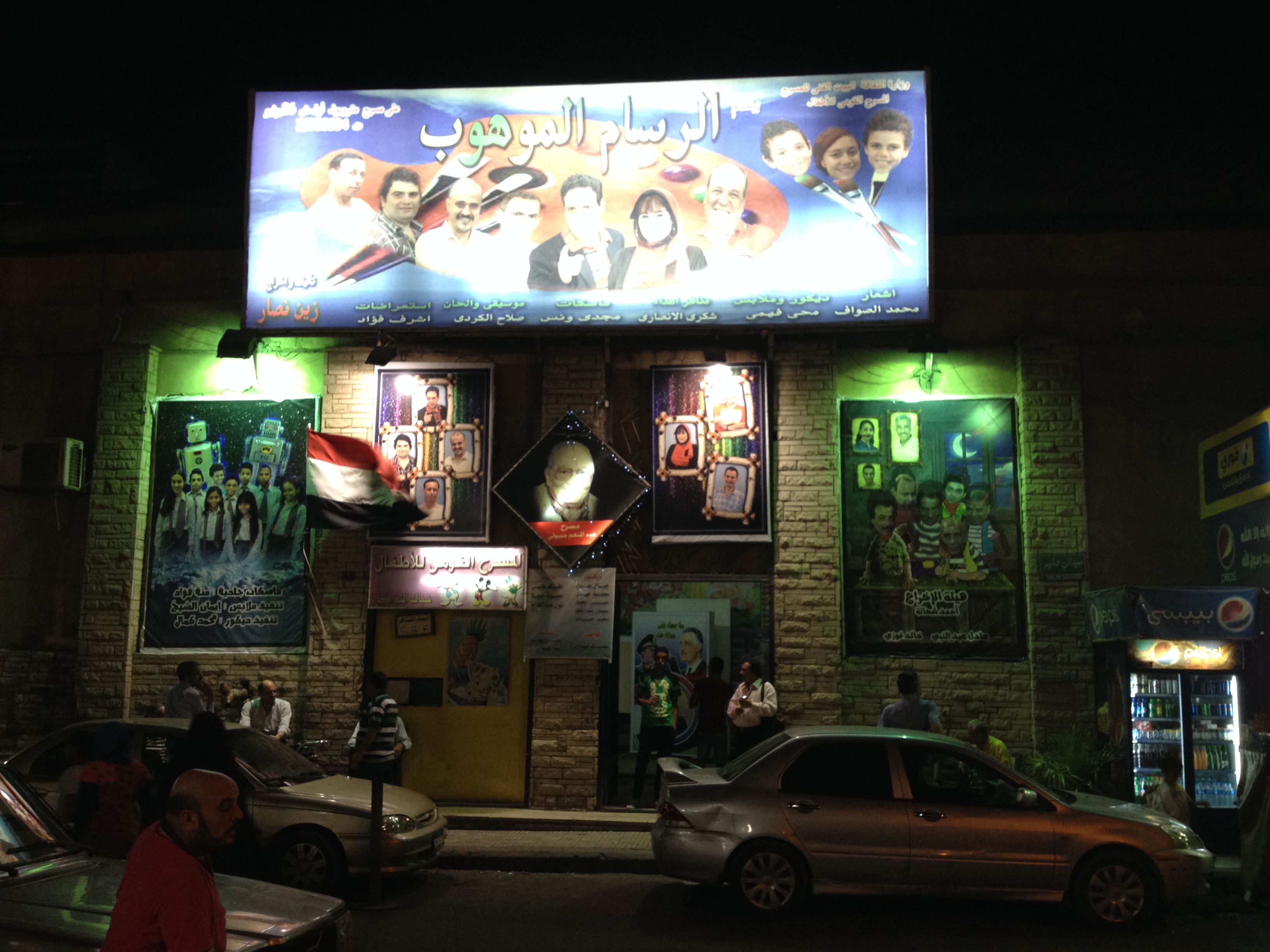 AD
You Might Have Missed
If they steal Sheikh Jarrah
Mugamma revisited: Reimagining the building and the square
Where do old lesbians go to die?
Carbon Colonies & A Green New Deal
AD
Jonathan Guyer
2 articles on Mada

Topics
Related
American University in Cairo
El 7ara: How the other 95 percent lives
Edmund Bower | “Well, they have to wear the tarboosh. Otherwise you wouldn’t be able to tell the difference, they
Mahatat
In photos: Classical music on Egypt’s balconies
Rowan El Shimi | In four Egyptian cities over a weekend this month, one could be walking down the street and all of a
American University in Cairo
The 2nd Egyptian Scenography Exhibition and the shadow of the state
Ismail Fayed | Ismail Fayed is left wondering if the regime is asserting the presence of the military even through niche