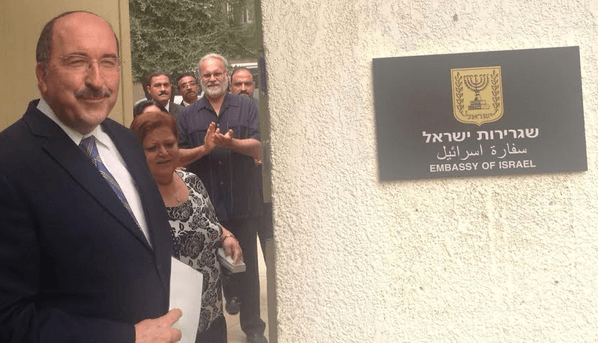 The Israeli Embassy in Cairo has reopened, after being closed for four years, the official spokesperson for Israeli Prime Minister Ofir Gendelman said in a statement on Wednesday.

A delegation led by Israeli Foreign Ministry Director General Dore Gold arrived in Cairo on Wednesday to inaugurate the reopening of the embassy, which will be located in the ambassador’s residence.

The statement added that the opening was attended by the deputy head of the protocol department from the Egyptian Foreign Ministry as well as US ambassador to Egypt Robert Stephen Beecroft, and embassy employees, headed by Ambassador Haim Koren.

The spokesperson for the Egyptian Foreign Ministry, Ahmed Abu Zeid, told the official Middle East News Agency that the Israeli ambassador has been working from his residency over the last four years, denying any news about the opening of a new embassy headquarters.

Zeid explained that Wednesday’s celebrations mark the designation of the ambassador’s residence as an official, yet temporary, location for the Israeli Embassy.

The Israeli flag was raised on the building, and the sign, bearing the symbol for the state of Israel was uncovered, followed by the national anthems of both Egypt and Israel.

“We have succeeded, under the leadership of Prime Minister Benjamin Netanyahu and President [Abdel Fattah al-Sisi], in confronting threats. We are working with Egypt to achieve stability and prosperity in the region. Egypt is always the biggest and most important country in the region, so there is no surprise when it is named in the Arab World ‘The Mother of the World,’” Gold said, according to the statement.

The embassy’s closure dates back to September 9, 2011, when a group of Egyptian protesters broke into the embassy’s Giza building, as thousands demonstrated against the death of three Egyptian soldiers at the hands of Israeli forces on the border with Israel in Sinai.

The protesters destroyed the wall around the embassy and one climbed the building, entered the premises and threw papers at protesters from inside.

The events led to deadly clashes between protesters and military and police forces, which extended to the neighboring Giza Security Directorate, resulting in the deaths of three protesters and the injury of over a thousand. Authorities arrested 75 people, who faced accusations of illegal congregation, using violence against civil servants, attacking military and police personnel, attacking diplomatic missions and attempting to storm the building of the Giza Security Directorate.

A former police general living overseas, Omar Afify, was accused of inciting the protesters, and was referred to trial with the rest of the defendants. Afify was sentenced to five years, and the others received a one-year suspended sentence.

Netanyahu said in press remarks following the violence that it was an assault on the peace treaty between the two nations, and emphasized the necessity of “maintaining an Israeli presence in Cairo.”