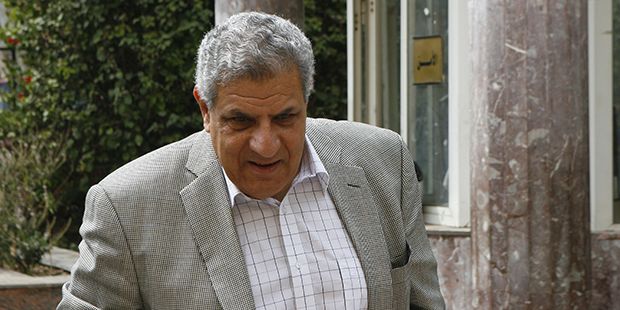 Cabinet spokesperson Hossam al-Qaweesh explained in a phone call to privately owned CBC channel on Tuesday night that Prime Minister Ibrahim Mehleb left a press conference in Tunisia after a journalist working for a “Muslim Brotherhood channel” asked him about a corruption case.

Mehleb reportedly said the matter relates to internal affairs and refused to answer the question.

Qaweesh insisted the prime minister did not storm out, but left after answering two questions, as had been previously agreed.

In the videos, Mehleb seemingly headed for the door as soon as the presidential palaces case was mentioned, in which former President Mubarak and his two sons were convicted of misappropriating state funds and using them for repairs to their private homes.

According to an investigation published previously by Mada Masr, preliminary investigations implicated Mehleb in the case. Moatassem Fathy, the police officer who filed the case report, said that, although he didn’t profit personally from the deals, Mehleb supervised the repairs at the presidential palaces in his position as CEO of the Arab Contractors Company at the time.

Lawyers of the Arab Contractors Company had admitted previously that it was involved in executing works for Mubarak’s family, according to private agreements, and that the company had received the fees for this work from Mubarak family members.

Fathy added that Mehleb didn’t sign any papers that prove his involvement in the case. A number of witnesses confirmed his involvement, however, along with two of the defendants, who explicitly stated in the investigations that he directly supervised the repairs.

The press conference was held in the presence of Tunisian Prime Minister Habib Essid and the visit ended with the signing of 16 agreements of cooperation between the two countries, Al-Arabiya reported.

During the trip, Mehleb invited Beji Caid Essebsi, the Tunisian president, to visit Egypt at the request of President Abdel Fattah al-Sisi, to discuss and enhance the cooperation between the two countries.