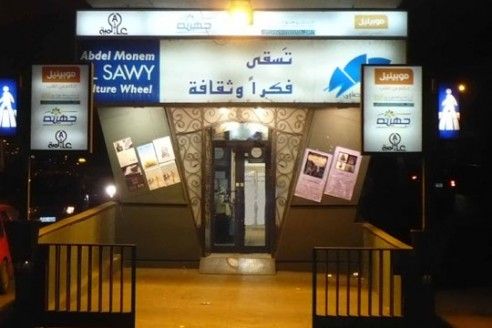 As the second part of a two-month-long anti-atheism seminar series titled Al-Ghany (“The Rich”) at El Sawy Cultural Wheel ended Tuesday, the organizer and commentators paused for reflection.

The controversial founder and director of the concert and exhibition venue in Cairo’s upmarket Zamalek neighborhood, Mohamed El Sawy, told Mada that attendee numbers were small.

“We attempted to open a door for those who are confused or hesitant, but it seems that many feared for their safety,” said Sawy, who moderated all the discussions.

The first session took place in August and the third is planned to start September 19. In August, Al-Azhar University science professor Mostafa Nasr and monotheism expert Hesham Azmy were selected to speak at the event.

Sawy told Mada Masr that atheism is a recurrent phenomenon in history and that is not unusual for a group of people to appear and start a rebellious cycle of doubt.

The cultural entrepreneur, who was briefly culture minister and an MP after the 2011 revolution, when he founded a secular liberal party called Al-Hadara, added that the aim wasn’t to conform or reprimand anyone but to shed light on the concept and definition of Al-Ghany: He who is the richest and the most independent.

Nasr told seminar attendees that the first steps to battle atheism are rational debate and answering all kinds of questions that may cross youthful minds without embarrassment or anger, hoping for more regular seminars.

Culture writer Ahmed Nada on the other hand was disparaging about El Sawy’s campaign.

“This seminar series is an attempt by the culture center to regain its audience after it lost much of it because many artists stopped collaborating due to the bureaucracy and the team’s lack of professionalism,” he wrote in Al-Modon, saying that El Sawy’s core audience are “the children of the middle-classes, who tend to be conservative.”

Founded in 2003, El Sawy Cultural Wheel is known as an accessible platform for young artists, but also for its social activities such as anti-audio pollution, anti-smoking and anti-illiteracy campaigns, criticized by some commentators for using moralistic language.

The center has previously become involed in censorship scandals, including one incident in 2012 when it censored a show titled Autobus for insulting religion.

This may be the first cause the Culture Wheel has adopted with an explicitly religious tone, but it has many precedents in Egypt. Fath Center for Research and Studies, a Salafi-oriented group, launched a YouTube channel earlier this year featuring video seminars discussing the atheism “phenomenon” and promoting ways to combat it.

And in December last year, a cafe in downtown Cairo was raided on the grounds that it was an “atheist cafe.”

A study published late last year claimed that Egypt has the highest number of atheists of any Arab country. Composed by Red C, based on polls by WIN-Gallup International, the study stated that the number was 866 in 2014. Some believe this is misleading, however, as many Egyptian atheists do not declare their beliefs for safety reasons.

A Facebook page for atheists, titled “Proclaim atheism for those who have the means to do so” and launched in 2014, now has around 2,950 likes and includes several testimonies by atheists from around the Arab world, each including the person’s name, age and the previous religion. The page’s motto is “we lived in the shadow and we will not die in the shadow.”

Topics
Related
atheism
Facebook page for Arab atheists draws fire from religious conservatives
The Facebook page, “Proclaim atheism for those who have the means to do so,” active since late August,
Abdeen
‘Atheists cafe’ just one target in fight against illegal business, say officials
As outrage continues to pour forth over Sunday’s crackdown on a café that was shut down
atheism
Cartoon Cartoon: The disbelieving sheep
Andeel | #Eid al-Adha Fugitive sheep: “I don’t want to die!” Observing sheep: “Dear lord,
arrests of atheists
Govt announces campaign to save youth from atheism
The newly formed Cabinet is planning a campaign to combat atheism, according to an official statement