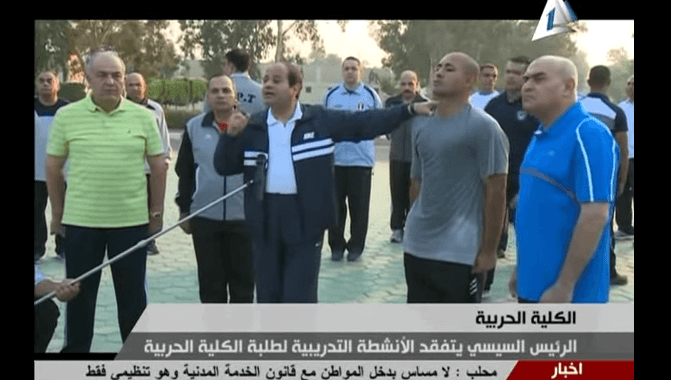 A group of military academy cadets gather around President Abdel Fattah al-Sisi on Sunday as he warns them of the dangers of “fourth-generation warfare.”

“These wars are used to destroy countries,” he explains.

“What are they used for, guys?” he asks them. “To destroy countries,” they reply in unison.

Sisi urges the wide-eyed cadets to spread the word on fourth-generation warfare to their families and friends when they are on vacation. “Tell them it is the most dangerous thing.”

Modern communication channels, psychology and the media are being deployed to create divisions and harm Egypt from within, he explains, adding, “No one can destroy a country, unless the country is harming itself.”

Sisi tells them such warfare is a “science,” saying they need to be prepared and on high alert for “exploitation,” so “no one conducts information warfare on you.”

The concept of fourth-generation warfare is typically defined as any war in which one of the major participants is a non-state actor. It has been utilized frequently by strategic experts and analysts, who also speak of fifth, sixth and even seventh- generation warfare.

Although the term first appeared in 1989, coined by American analysts, the rhetoric first surfaced in Egypt following the January 2011 revolution.

Ahmed Abd Rabou, assistant professor of comparative politics at Cairo University, explains to Mada Masr that, while the term fourth-generation warfare exists in some academic writings, “this doesn’t mean it’s a reality.”

In a column published in independently owned Al-Shorouk newspaper in April 2014, Abd Rabou refers to research by Antulio Echevarria, a US specialist, titled “The fourth-generation war and other myths,” in which he debunks the theory and explains that such terms have been used by the CIA to justify “their failure to prevent terrorist attacks on American targets.”

Abd Rabou thus questions why the term only gained popularity following the January 25 revolution in 2011.

He explains that it has been misused in Egypt for political purposes, with the aim of instilling fear to an extent that people “refuse democracy, multi-party systems and opposition, and keep their loyalty only to state institutions and security services.”

Who this non-state actor is, however, hasn’t been agreed upon. In his speeches, Sisi often keeps it vague, frequently attributing attempts to create instability and unrest to modern communication and advanced technology.

Typically, the blame is placed on activists and protesters for applying foreign agendas and trying to create instability.

In his popular television show on Sunday evening, following Sisi’s address to the military cadets, Ibrahim Eissa rants at the president for not recognizing the real enemy.

Eissa claims the state is wasting its time arresting activists and fighting leftists, while overlooking the real force behind divisions in Egypt, which he says is Wahhabism.

“If you’re warning against disintegration in Egypt, what are you doing to stop it?” Eissa asks. “Look at those who are really dividing us into Shia, Sunni, Muslims, Christians, you are protecting them,” he says, referring to Salafi and other Islamist groups.

This is not the first time Sisi has spoken of fourth-generation warfare.

In one of his televised addresses in February 2015, he blamed it for a leaked audio recording, allegedly between him and other military officials, ridiculing Gulf leaders.

“I am reminding everyone listening of the fourth-generation warfare,” he said, explaining that it is an “extremely dangerous generation in the region and in Egypt.”

“I can take words and do with them as I please,” he said, alluding to the alleged leaks, “they use technology and science.”

In another speech on July 4, Sisi addressed troops in North Sinai in his military uniform following a major attack by the Islamic State-affiliated militant group, Province of Sinai, which resulted in between 30 and 70 deaths. He warned again of fourth-generation warfare.

“I told you this before and you know this well,” Sisi said, “What is happening now is an advanced kind of struggle. This is fourth-generation warfare.”

He again spoke of tools employed to affect media and communication, aimed at “shaking the will of Egyptians.”

He said such tools are used to present a false image of Egypt and its stability and security.

“Two years later, did we not know that this would persist? Yes we did, and Egyptians knew and are ready to fight,” he asserted.

A staunch advocate of the fourth-generation warfare concept is strategic researcher Amr Ammar, who authored, “The Civil Occupation: The secrets of the January 25 revolution and the US Marines,” which unpacked alleged plans to destroy Egypt from within.

Ammar has spoken on several talk shows of a US-Zionist plan to control the world.

“It’s a geopolitical game,” he asserted, explaining the United States has a plan to control oil.

The plan, according to his theory, includes taking over Eurasia, as well as the Mediterranean and Suez Canal. Control over the latter he said, was attempted through unrest in the Middle East, or what he consistently refers to as the “Hebrew Spring.”

“The US has more than one strategic goal in the region,” he explained, during a morning talk show on OnTV. “One of these is to divide Arab armies to guarantee Israel’s security.”

To achieve this plan, he explained, civil war must be instigated between Sunni and Shia peoples, and the region must be turned into a market in which it is supplied weapons in return for oil.

“This is World War 3, redefined,” he said. “fourth-generation warfare.”

Except, in this war, there is no need for military intervention, he asserted, “just moving chess pieces around.”

A plan to divide the Middle East and create a new map, according to Ammar, entails “moving people to take to the streets, demanding the fall of the ruling regime and spreading chaos to bring down the country … leaving room for the US to apply its US-Zionist agenda, like it did in Yemen and Libya.” 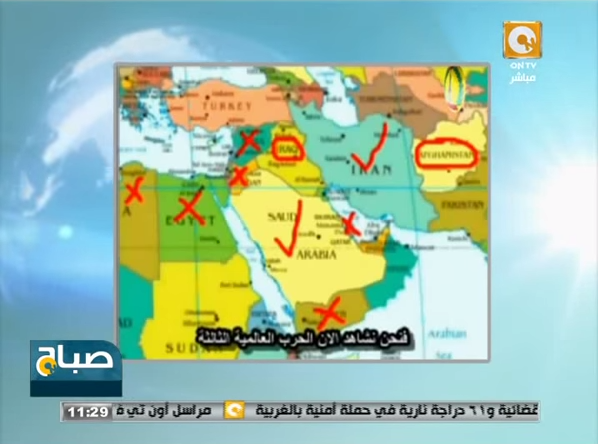 The map Ammar showed on OnTV

The new map, according to Ammar, will guarantee the independence of the Jewish State.

This, he said, explains the “Hebrew Spring” overtaking Tunisia, Egypt and Libya. Egypt was on the brink, Ammar explained, given all the unrest, which he claimed was orchestrated in coordination with the Muslim Brotherhood. But, he added, the plan was thwarted by the June 30 revolution.

On the other hand, Abd Rabou asks: If the perpetrators of fourth-generation warfare are the US and Israel, “Why are we cooperating with them? Why do we import our weapons from the US?”

He doesn’t rule out conspiracies altogether, saying Egypt might very well be targeted by political actors. But, he does separate this from the notion of fourth-generation warfare. He claims it is the role of the state to be transparent and offer concrete facts about who it is that is targeting Egypt and to stop cooperating with them.

AD
You Might Have Missed
Mugamma revisited: Reimagining the building and the square
Carbon Colonies & A Green New Deal
What we talk about when we talk about trees
Where do old lesbians go to die?
AD
Dalia Rabie
38 articles on Mada

Topics
Related
attacks on checkpoints
Sisi appears in military uniform to support troops in Sinai
For the first time in his presidency, Abdel Fattah al-Sisi dressed in full military uniform to visit
Arish
Medical sources: At least 70 killed as militants attack 5 checkpoints in North Sinai
At least 70 people were killed in coordinated attacks by armed militants on five checkpoints in Sheikh
discrimination
Egypt’s 4th-generation warfare
Ziad A. Akl | Due to excessive propaganda and use of an irrelevant and non-objective nationalist rhetoric, we have