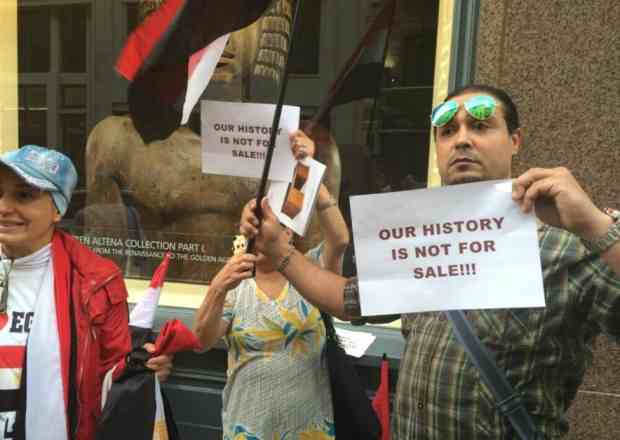 London protest against sale of Sekemkha

The Antiquities Ministry is inviting Egyptians to contribute to a crowdfunding campaign to buy back a 4,500-year-old statue auctioned off in the United Kingdom last year, fearing it may soon disappear into a private collection and be lost to the public for good.

It’s an astronomically costly proposition — the statue of scribe and nobleman Sekhemka had fetched more than 16 million British pounds, or well over LE197 million, at a Christies auction in July 2014. It was put up for sale by the Northampton Museum, reportedly to help fund a new extension.

The state-owned Al-Ahram newspaper reported that a wealthy Qatari woman purchased the statue, but neither the museum nor UK-based news outlets have disclosed the name or nationality of the buyer (or buyers) when they reported on the auction.

After the sale, Egypt successfully pushed the UK to enact an export ban on the artifact, but the ban is due to expire Friday, August 28, leaving Sekhemka’s fate uncertain. The Antiquities Ministry is now fighting to recover the statue, or at least keep it on public display in the UK, as it’s “a priceless artifact that belongs to Egyptian civilization, and to humanity in general,” it said in a statement posted to its official web page.

Museums that house ancient artifacts have a legal responsibility, and even a moral duty, to safeguard these objects for the public, the ministry continued, claiming the sale of Sekhemka is thus “an ethical crime.”

Antiquities Minister Mamdouh al-Damaty said that Egypt does not possess any ownership documents for the smuggled statue during a press conference on Tuesday. He added that there is no proof of an alleged decree by Mohamed Ali prohibiting the export of artifacts without special approval.

Damaty explained that the crowdfunding campaign is a serious attempt to stop the export of the limestone statue outside of the UK, asserting that filling a lawsuit against the UK would be “useless and a waste of public funds,” according to state-owned Al-Ahram.

The minister confirmed that all official dealings with the Northampton Museum will be stopped.

UK authorities acknowledge that the sale violated national regulations on historic artifacts. In response, the Arts Council of England stripped Northampton Museum of its accreditation status until at least 2019, effectively denying it access to public funding.

The 75-cm-tall limestone statue represents a seated Sekhemka with a small woman, likely his wife, kneeling beside him. The scribe, whose tomb has not yet been unearthed, is believed to have lived during the Old Kingdom’s Fifth Dynasty (circa 2494 BC – 2345 BC). The object has been traced back to either the necropolis of Abu Sir, or the Saqqara pyramid complex in Giza.

The marquis of Northampton smuggled the statue out of Egypt in unclear circumstances, after presumably buying it off a treasure hunter sometime between 1849 and 1850.

Gunilla Loe, chairperson of the Northampton-based Save Sekhemka Action Group, told The Independent that the sale of such artifacts must be stopped, as it motivates looters to continue ransacking ancient sites.

Loe said she hoped to convince authorities in the UK and Egypt to work together to persuade the private buyer to put the statue on public display.

“It should not be shut away anywhere, it’s far too beautiful for that,” she said.

As for the crowd-sourcing campaign, the ministry has not yet disclosed how much money has been raised, as the clock winds down on the export ban.