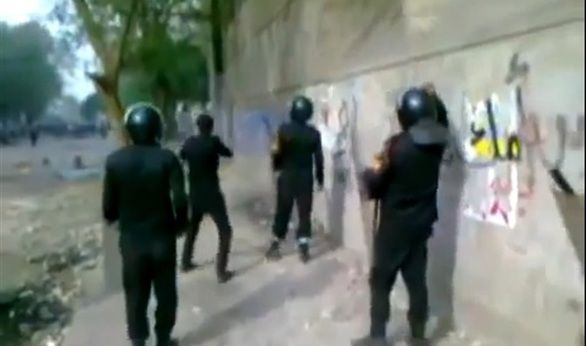 By
Mohamed Hamama
Translated by
Heba Afify and Nadia Ahmed

The anti-terrorism law that was ratified last week included several articles that were contested for months after the draft bill circulated earlier this summer, and which critics had hoped to see either amended or taken out altogether.

Much of the debate focused on Article 8, which holds that, “Those assigned to implementing the provisions of this law are not to be held criminally liable if they use force to carry out their duties, or to protect themselves from any imminent danger to their lives or properties, as long as this use of force is necessary and in appropriate proportion to the posed danger.”

Human rights lawyer Khaled Ali points out that the second half of the article, which addresses the use of force in cases of self-defense, is effectively redundant, as this provision already exists in other laws currently on the books. The controversy, however, stems from the first half, which protects law enforcement from criminal prosecution if they use force while “performing their duties.”

He believes that the right to self-defense, which already exists in the criminal penalties law, for instance, was only included in Article 8 to bolster its protection of security forces.

Lawyer Essam al-Islamboly agrees with Ali, though he takes a much harsher stance, calling Article 8 a “crime.” Islamboly believes the article essentially “allows policemen to kill whoever they want” with total impunity.

Echoing Ali, he adds that the police law already specifies circumstances in which security forces are permitted to use force, and therefore Article 8 has no real place in the anti-terrorism law.

But more than that, it’s the ambiguous use of the word “duties” that has been particularly divisive.

Karim Ennarah, a researcher on security issues for the Egyptian Initiative for Personal Rights (EIPR), finds the phrasing problematically vague.

He adds that the law also doesn’t explicitly define what constitutes a terrorist act, warning that this could grant security forces an even wider space of impunity as they carry out their undefined “duties.”

For example, Ennarah says the article would have exonerated the officer who came to be known as “the eye-sniper,” who faced criminal charges after being captured on camera aiming his rifle at a protester’s eyes in 2011.

Ennarah points out that law enforcement have generally been exempt from prosecution over the past two years, but now Article 8 could codify that practice into law. He argues that this and other pieces of legislation governing the security forces are in direct opposition to international standards.

Under the new law, it’s unclear if prosecutors will be able to investigate incidents such as the deaths of nine Muslim Brotherhood members in a residential flat in July. The Interior Ministry said that police forces shot the nine men dead as an act of self-defense, but others have claimed that the men put up no resistance when the police forces raided the flat to arrest them, accusing the police of carrying out an extra-judicial execution.

That incident came less than a month after engineering student Islam Salah Eddin (known as Atitu) was fatally shot by police forces. Again, in that case the Interior Ministry said Atitu died in a shoot-out as he attempted to resist arrest, while his fellow students have testified that he was abducted by plain clothes security agents in the middle of a class and was summarily executed shortly thereafter.

Also in July, the Interior Ministry announced that security forces killed four members of a “Brotherhood cell” at a farm in Fayoum. The deceased were accused of killing the daughter and friend of a police officer, according to officials, but again, area residents say they the officers raided the farm, arrested the four suspects and then killed them.

Article 8 might prevent any light from being shed on what actually happened in these, and dozens of other incidents in which the police are accused of using unjustified, and even lethal, force against innocent civilians and criminal suspects alike.

Rights lawyers have been fighting against what they call insufficient accountability for the police even before their powers were extended in the new anti-terrorism law. Ali points out that in 2012 he filed a lawsuit challenging Article 102 in the police law, which allows police to fire live ammunition to disperse demonstrations. That case is now being reviewed by the Supreme Constitutional Court.

In Islamboly’s opinion, Article 8 in the anti-terrorism law is similarly unconstitutional, arguing that it effectively does away with checks and balances that would ensure security forces don’t use disproportionate force. But, he explains, the law can’t be challenged before the Supreme Constitutional Court until it is actually implemented.

AD
You Might Have Missed
Where do old lesbians go to die?
Carbon Colonies & A Green New Deal
Mugamma revisited: Reimagining the building and the square
What we talk about when we talk about trees
AD
Mohamed Hamama
84 articles on Mada

Topics
Related
Amnesty International
Rights groups condemn ‘Orwellian’ anti-terror law
The new anti-terrorism law was met with harsh criticism from international rights groups after being
detainee and prisoner deaths
Dying in prison: Failed infrastructure, or premeditated neglect?
Mostafa Mohie | In the past two months, at least five people died in police custody after being arrested on politically
6th of October City raids
HRW: Police may have killed 9 people in extrajudicial execution
Police may have illegally killed nine Muslim Brotherhood supporters during a raid on July 1, 2015, reported
anti-terrorism law
As gov’t scrambles to ratify anti-terror law, critics fear for human rights
In the wake of last week’s deadly attacks in Sinai and the assassination of Prosecutor General Hesham