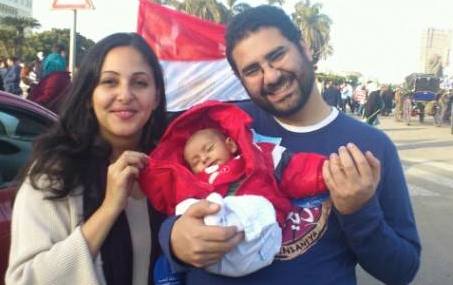 Alaa Abd El Fattah, outspoken software tecchie, blogger and political activist, has spoken to the media for the first time since he began serving his latest sentence at Tora Prison.

Abd El Fattah is serving a five-year prison sentence for being at a civil gathering in front of the Shura Council in November 2013 to protest a constitutional provision allowing the military to court-martial civilians.

The questions were sent by journalist Moataz Shams al-Din to Abd El Fattah’s mother, mathematics professor Laila Soueif, who put them to her son during a visit. On the way home she wrote down his responses and relayed them back to the journalist. No papers were exchanged between Alaa and his mother.

Recently, the courts upheld a one-year sentence against Abd El Fattah for “burning down the headquarters of [presidential candidate] General Ahmed Shafiq.” The prosecution has also brought another case against him for “insulting the judiciary.”

Abd El Fattah’s sister, Sanaa, is serving a two-year prison sentence for protesting against the Protest Law under which her brother is imprisoned.

Moataz Shams al-Din: Describe the conditions in Egyptian prisons as you experienced them.

Alaa Abd El Fattah: Prisons in our country are the embodiment of “violation.” For me personally I’ll quote my father when, shortly before he died, he said that my conditions were “a lot better than others’ and, on the whole, bearable in comparison with what the political prisoners from the Islamist movement suffer.”

The authorities are being totally intransigent, though, in forbidding me books. Not just political books — any books from outside prison, including books published by the Egyptian Ministry of Culture.

MSE: Why do you think they do this?

AEF: They’re trying to isolate me, intellectually as well as physically, from the community.

MSE: Can the current administration in Egypt be reformed?

AEF: There’s no hope at all in reforming the Egyptian state or any of its institutions, including the presidency. These institutions and their heads deserve a revolution.

MSE: Can there be a rapprochement between the government and the “youth of the revolution”?

AEF: At the moment, we are too weak to be of interest to the state. And even if, for argument’s sake, someone in the government were interested in mending fences with us, that would not really change what’s happening on the ground. The rapprochement that could affect the course of events, for better or worse, is between the state and the Muslim Brotherhood.

MSE: Could that happen soon?

MSE: You talk about revolution. Do you think there could be a new coming together of the forces of the revolution?

AEF: There is no longer one revolution that would let us to talk about “its forces.” Now we have multiple revolutions, and we need to think carefully about what this means.

MSE: Is there dialogue between you and members of the Muslim Brotherhood in prison? Is that a positive thing?

AEF: In prison everyone talks to everyone, including jihadis and remnants of the Mubarak regime. No one asks if that’s “useful,” because there’s nothing else to do. On the other hand, you need to remember that everything that was organized is now fragmented, so any conversations that take place are between individuals. They cannot be described at all as dialogue between groups or movements.

MSE: Members of the Brotherhood speak of legal violations against them in prison. Have you seen anything to confirm this?

AEF: Yes. I’ve seen violations. For example, I was in court recently [for the “insulting the judiciary” case] and they brought in Magdi Qurqur [from the Brotherhood-sympathizing National Alliance Supporting Legitimacy] by mistake. He was in really bad shape. He told me that the day the prosecutor general was assassinated, prison officers went into the cells in Tora’s maximum security prison and stripped them of everything — prisoners’ clothes and bathroom stuff, but also medicines, even medicines which are really dangerous to stop suddenly, like for chronic heart problems, for example.

MSE: It’s said that Egyptian prisons are incubators for extremism?

AEF: This has always been the case. Since way before the January 25 revolution, prison was the place where the Salafi Jihadis proselytized and mobilized. I don’t know if that’s on the increase or not. But what’s certain is that prisons are an incubator of violence because of what happens inside them.

MSE: The Arab Spring has died and the Islamic State (IS) is flourishing. Who’s responsible?

AEF: I don’t know. History, maybe! When every action by every one of the different players somehow pushes toward the same result, as though there was some inexorable historical process at work, you can’t really place full responsibility on one player or another.

It’s like the rise of the Nazis in the 1930s in Europe — lots of factors fed into it over the years before it manifested itself clearly as the terrible danger it was. The IS is also a monster that our societies have been breeding and nourishing for a long time.

MSE: How do you see Washington and the West’s attitude toward Egypt?

AEF: I don’t think any attitude they strike can really affect the level of violations we have here. They may change the odd detail here or there. But we should also say that the positions taken up by western governments are, in the final analysis, non-ethical positions backing narrow economic interests, such as the interests of certain companies in deals financed by Saudi or Gulf money, or high-interest loans.

This article was first published on Huffington Post Arabic.

AD
You Might Have Missed
Where do old lesbians go to die?
Carbon Colonies & A Green New Deal
What we talk about when we talk about trees
Mugamma revisited: Reimagining the building and the square
AD
Ahdaf Soueif
1 article on Mada