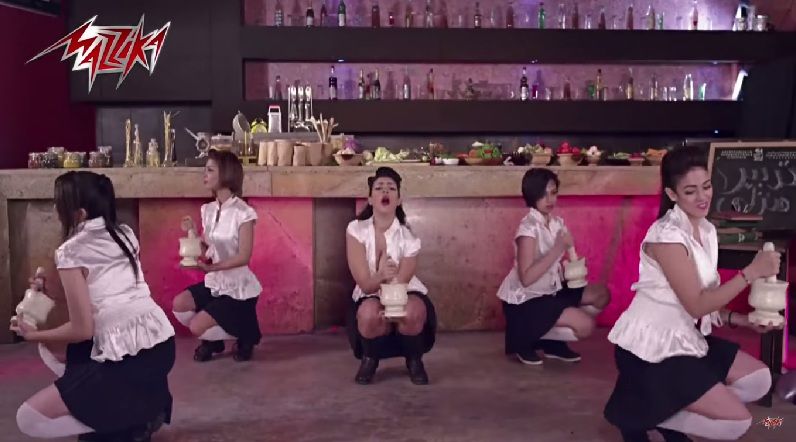 Two belly dancers are facing charges of debauchery and promoting immorality in their music video clips, the latest in a string of cases against performers in Egypt.

The defendants, Soha Mohamed (known as Shakira) and Dalia Kamal Youssef (known as Bardis) had a hearing on Thursday at the Agouza Misdemeanor Court, and await their final verdict on September 3, according to the state-owned news site Ahram Gate.

Lawyer Mohamed al-Nemr filed the initial police report against the dancers, Ahram reported, accusing them of tarnishing Egypt’s image abroad in their video clips “Felfel wa Kamoun” (Pepper and Cumin) and “Ya Wad ya Taei’eel” (Hard-to-Get Boy). Both women were then arrested at the end of July.

The trial began on July 25 at a court in Imbaba. At the time, Bardis told the privately owned news outlet Youm7 that the charges actually had nothing to do with immorality, but rather were motivated by “a bunch of lawyers seeking fame.” She accused the media of grossly exaggerating the facts of the case.

“Felfel wa Kamoun” is a folkloric song made popular by the late belly dancer Zizi Salem, who was famed for her nights of dance and music at her restaurant in the North Coast. The video clip of Shakira’s version of the song was released following Salem’s death last August.

As for Bardis, her contested video is a remix of late film star Souad Hosni’s famous song “Ya Wad ya Tei’eel” from the 1972 Hassan al-Emam movie Khali Balak min Zouzou (Take Care of Zouzou).

Earlier in July, performer Salma al-Fouly was sentenced to a year in prison on charges of inciting debauchery and committing crimes against public morality with her racy video clip, “Sib Eddi” (Hands Off). The clip’s director and co-star, Wael al-Sedeki, was also sentenced in absentia. News reports claimed that he fled the country before the verdict.

Elhamy Hussein, the defendants’ lawyer, told Youm7 that this case was different, as Fouly’s video was an amateur production shot in an apartment and uploaded onto YouTube. The videos featuring Shakira and Bardis, on the other hand, were professional productions that aired on cable TV. Furthermore, they don’t have a previous criminal record, unlike Fouly, he added.

This hasn’t been a good year for belly dancers in Egypt. In April, the renowned Armenian performer Safinaz was sentenced to six months in prison and fined LE15,000 after she wore a revealing Egyptian flag costume. On July 4, the Agouza Misdemeanor Court turned down her appeal and upheld the sentence.

The Penal Code mandates sentences ranging from fines to imprisonment for those who violate or offend “public morals.” Furthermore, in May 2014 a law was issued criminalizing the desecration of the Egyptian flag and disrespect for the national anthem.

Mahmoud Othman, a lawyer and researcher who works with the Association for Freedom of Thought and Expression (AFTE), told Mada Masr that “the procedures are unclear and the accusations against the defendants are vague” in these cases.

He suggested that the recent crackdown on performers often has to do with precarious work conditions, particularly the fact that belly dancers typically don’t have work permits or official contracts at the sites where they perform.

Othman pointed to an incident last week in which 40 belly dancers working at a well-known hotel were arrested on charges of inciting debauchery.

“I think it is a matter of under-the-table deals between security forces and hotel owners,” Othman asserted. “Officers just want to fill their arrest quotas.”