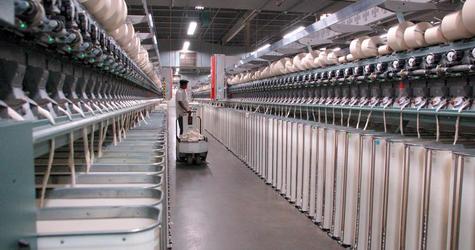 Egypt’s cotton industry has been subject to a dizzying series of policy shifts this year, leaving both farmers and manufacturers concerned about the future of the fabled crop.

The year opened with a January announcement that the government would end a decades-long policy of subsidizing farmers, requiring instead that they negotiate sales directly with cotton producers. The news alarmed cotton producers.

“The government is breaking the backs of cotton farmers,” Osama al-Khouly, a founding member of the Independent Farmers Union, said at the time.

In July, in a move it said was aimed at protecting domestic cotton production, the Agriculture Ministry announced it would ban imports, effectively forcing manufacturers to use local cotton. “We will not subjugate the Egyptian farmer to global prices,” Minister Salah al-Din Helal said in a July 7 television interview.

Helal dodged questions about how long the ban would last. There are a million kantars of unsold local cotton left over from last season, he said. A kantar is around 100 pounds or 45 kilograms. “Until we use the Egyptian cotton, we cannot import any new cotton from abroad.”

A week later, the import ban was tentatively retracted by the Cabinet.

“All of us, even the minister of industry, were taken by surprise,” says Mohamed Eshra, vice president of textile firm Eshratex, of the import ban. “The decision was taken by the minister of agriculture on his own, without even consulting other ministries.”

The ban’s reversal, which came after lobbying by manufacturers, was almost as confusing. The statement was vague, saying that imports of short staple cotton would be allowed, but not how much or for how long, Eshra notes. Imports of long staple cotton are still not allowed, although a decision is expected in the coming days.

The thinking behind the export ban seems clear enough on the surface. Egypt has a backlog of cotton, and another 1.5 million kantar are expected to come onto the market by October. It also has a large textile industry, employing some 60,000 people, which currently relies on cheap imported cotton.

By leaving manufacturers with no choice but to buy local cotton — at around twice the price they would pay for imports — banning imports would shift the burden of subsidizing farmers from the government onto industry.

The reality is more complicated, explains Gamal Siam, a farm owner and an agricultural economist at Cairo University. The country’s textile industry is out of sync with agricultural production. Egyptian cotton is famed for its long staple, which allows it to be spun and woven into luxurious fabrics. Getting the true value out of long staple cotton requires “updated, sophisticated machines,” says Siam.

By contrast, most of Egypt’s textile factories are equipped to process cheaper, short staple cotton into coarser fabrics. “The problem is that the machines of the industry are very old, too old. There have been no convenient investments in the cotton industry for three decades,” Siam explains.

The break-even cost for Egyptian cotton farmers is around LE1,200 per kantar, while imported cotton costs factories around LE600, he says. Without investment into better machinery, it doesn’t make sense for Egypt’s textile mills to pay premium prices for long staple cotton.

Even that investment might not be enough to stimulate a demand for local cotton. Most of the factories that are equipped to process long staple cotton usually still prefer imported goods. Over the past five years, Eshra says, local cotton has degraded in quality, with nominally high grades of the crop coming to market with shorter staples and more impurities.

Like many of his peers, Eshra says he primarily uses American pima cotton to produce fine textiles. Also a long staple crop, pima offers “consistent quality,” he says, and is shipped free of contamination.

Eshra doesn’t believe blame for deteriorating quality lies with local farmers. Instead, he points to a lack of government support for agriculture — not just subsidies, but research for better seeds, agricultural extension programs and quality control.

“I’d like the government to support the cotton research for high quality and higher yields of cotton,” Siam says. “It needs a lot of effort and this is the role of the government, not to leave the farmers by themselves.”

Instead, Siam says, the government has recently reduced funding for agricultural research. “I condemn the government of Egypt for the deterioration of Egyptian cotton production.”

“The rhetoric was always about agriculture as the base of the economy, farmers as authentic Egyptian citizens, and all this,” says Yasmine Moataz, a PhD candidate in social anthropology, working on rural issues. “This has never been translated into concrete policy since the 1950-60s.”

The decline of Egypt’s cotton farms is part of an overall economic policy in which small farmers have been marginalized, she says.

As the country embraced liberalization policies under former President Anwar Sadat and then Hosni Mubarak, the government placed less emphasis on subsistence farming and focused more on bringing foreign funds through exports and agricultural investment.

“The general trend and direction of state policy has been in favor of large investment. They see small farmers as inimical to that,” Moataz says.

While Egypt liberalized its economy and opened the market for imports, its small farmers were left to compete with heavily subsidized farmers from rich countries. The governments of major cotton exporters like China, India, the European Union and the United States paid out a combined US$6.5 billion in cotton subsidies in the 2013/14 market year.

In the United States, for example, in addition to funding research, the government provides cotton farmers with insurance to protect farmers against poorer-than-expected yields and prices. The latest US farm bill also includes a $16 million a year, five-year “Pima Agriculture Cotton Trust fund” that subsidizes manufacturers who work with domestic pima cotton.

Agriculture Minister Helal — who vowed that Egyptian farmers wouldn’t be subjugated to global cotton prices — claims to be tackling the problem. But the recent flip-flops in policy will risk making things worse by rattling the producers and making potential investors nervous.

“This is already affecting the investment environment in Egypt. Not only in textiles, in all industries,” says Eshra.

“When you invest, you invest for 15 to 20 years,” but in Egypt, he explains, “there is no continuous strategy for investment where you can see [a] 10 year future.”

With policy so uncertain, and conditions so tough for small farmers, Siam fears the industry may disappear altogether. “There is a long history of famous Egyptian cotton. It is like the pyramids for Egypt,” he says.

Around 250,000 feddan are cultivated with cotton right now, down from 1.2 million in 1980. Next season, that could be 100,000, Siam warns, then less and less. More farmers, including Siam’s own family, have shifted towards alternative crops like rice, which is more lucrative but also uses more water than cotton.

“If the problem is not solved, there will be very little area cultivated with cotton next year,” he says. ”Maybe within two or three years, [it] will disappear forever.”

AD
You Might Have Missed
What we talk about when we talk about trees
Carbon Colonies & A Green New Deal
Where do old lesbians go to die?
Mugamma revisited: Reimagining the building and the square
AD
Isabel Esterman
99 articles on Mada