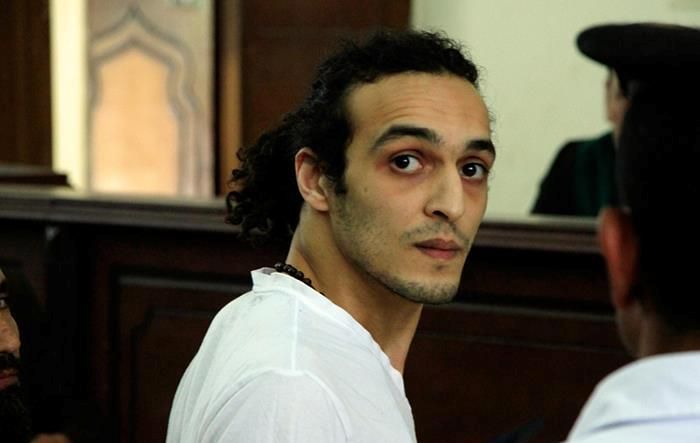 A session to review the detention of photojournalist Shawkan, scheduled for Monday, was cancelled, and his case referred to the criminal court on Sunday, according to a lawyer on his defense team.

Lawyer at the Arabic Network for Human Rights Information, Karim Abdel Rady told Mada Masr that the head of East Cairo prosecution informed him on Sunday of the cancelled trial date for detained photojournalist Mahmoud Abou Zeid (aka Shawkan), who has been imprisoned for two years and exceeded the maximum period for pre-trial detention two days ago.

A statement was issued by the general prosecution last week, announcing the referral of Muslim Brotherhood Supreme Guide Mohamed Badie and other leading members of the group to the criminal court on charges of murder, attempted murder, organizing and participating in “an armed sit-in” at Rabea al-Adaweya, possession of weapons with the intention of assault, blocking the road and occupying and sabotaging public buildings.

Cairo appeals court is yet to determine a date for the first session in this case, and the names of those referred haven’t been made public.

“The release of Shawkan has become mandatory, because he has exceeded two years in pre-trial detention, whether or not his name is included in the referral order,” Abdel Rady asserted, adding that he would submit an appeal for Shawkan’s release on Monday.

It is not clear whether or not Shawkan was referred to court in the same case as the other detainees, as Abdel Rady was unable to view the referral order. Lawyer Adel Moawad, a member of the defense team for the Muslim Brotherhood defendants confirmed to Mada Masr that he hadn’t seen the referral order either.

“The picture is not clear. We went to the East Cairo Prosecution and they told us that they know nothing about the referral order. We’ve never seen such secrecy around a case,” Moawad added.

Shawkan was arrested on August 14, 2013, while covering the dispersal of the pro-Muslim Brotherhood sit in at Rabea al-Adaweya. He was arrested along with two foreign journalists who were later released, while he remained in prison.

In a press conference held at the Journalists Syndicate to mark two years of his detention on Wednesday, Shawkan’s father spoke about his son’s deteriorating health, as he suffers from Hepatitus C, anaemia and low blood sugar, and has been reportedly refused adequate medical care.