Muslim Brotherhood remembers Rabea in English, but less so in Arabic
By
Mada Masr

The “Rabaa Story” website does not state that it is affiliated with the Muslim Brotherhood. But its logo is shared by the Muslim Brotherhood twitter account, Ikhanweb, and the hastag #RememberRabaa is omnipresent on Brotherhood sites, which are heavily pushing the site and its call for a global rally on Friday to mark the deadly dispersal of the Rabea al-Adaweya and Nahda Square sit-ins two years ago.

The logo features the numeral two enclosing a picture of a woman looking shocked and close to tears, with clouds of, presumably, smoke and tear gas surrounding the scene.

The site is run by the Rabaa Story Foundation, which describes itself as a non-profit foundation formed by witnesses who attended the sit-in, with a mission of raising international awareness about rights abuses committed by security forces on August 14, 2013. Mada Masr was unable to verify where the foundation is registered. The site lists a US toll-free number in its contact information.

The Rabaa Story website is sleek and glossy, with infographics detailing the number of people who died during the dispersal (though without clearly identifying sources), pictures of victims, videos promoting the second year anniversary and blurbs telling people to mobilize “on the street” and make videos promoting awareness of the anniversary, and even plans for a museum.

Under the site’s “outreach” section, users are encouraged to get in contact with “influential individuals in your local area or your network” and exhort them to start promoting awareness of the anniversary with materials from the website.

The campaign seeks to stage a series of events around the world commemorating the dispersal. On Wednesday, there was a demonstration in London’s Trafalgar Square. Pictures show people wearing yellow t-shirts emblazoned with the #RememberRabaa hashtag and the website’s logo, while other demonstrators are lying on the ground holding up their hands in a four-fingered salute, a sign which has come to represent the dispersal. 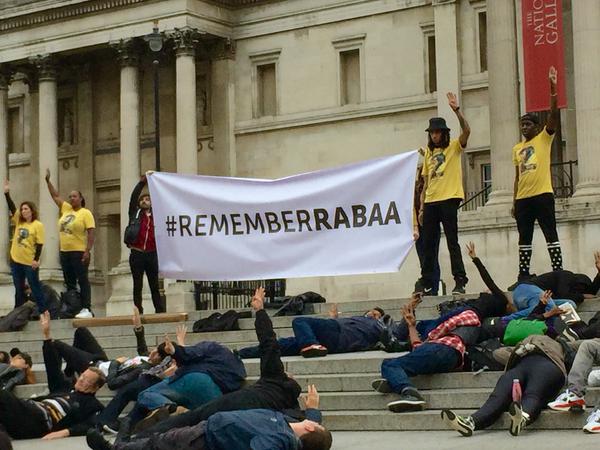 The photos of the protesters were tweeted by Ikhwanweb, which has also been promoting the Rabaa Story Foundation’s book, the Remember Rabaa Album, which shows pictures from the sit-in and dispersal.

Ikhwanweb Arabic, meanwhile, has been much less active in promoting the anniversary. While the site tweeted a Facebook statement from the Muslim Brotherhood in Arabic condemning the impunity of authorities from prosecution and calling on “revolutionaries” to rise up on a “day of rage” on August 14, their strategy has lacked the focus and creative savvy of the English-language campaign. They also have been tweeting far less — Ikhwanweb Arabic only tweeted once on August 13, while Ikhwanweb English tweeted and retweeted promoting commemoration of the event at least seven times.

When it comes to how the public side of the Muslim Brotherhood remembers Rabea, the focus appears to be on getting the notice of the international English-speaking community — a community which, as shown by recent condemnatory statements from foreign rights groups, has already proven sympathetic to their narrative.

Topics
Related
Mohamed Badie
2 years later: Who is to blame for Rabea?
Mai Shams El-Din | Two years after the bloody dispersal of the Rabea al-Adaweya protest camp that claimed the lives of more
Mosaab Elshamy
Breakfast with Mada: Mosaab Elshamy on Rabea, photography and memory
Lina Attalah | Mosaab Elshamy, a photojournalist trained as a pharmacist, provided an indelible photographic document