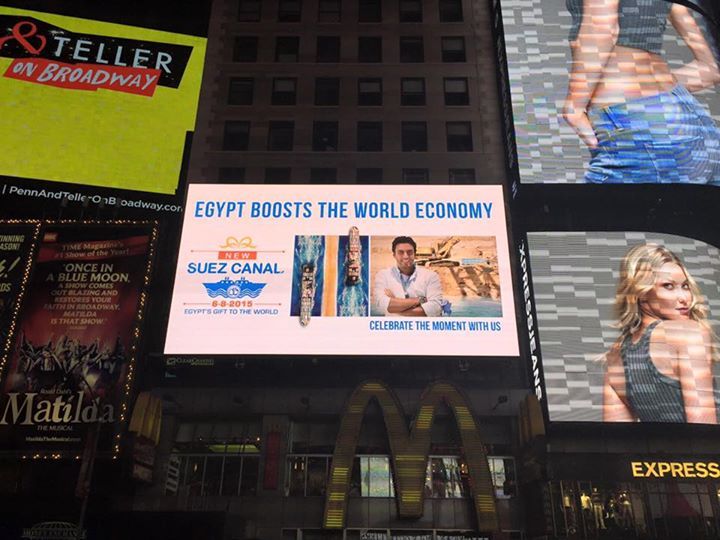 A full-page ad running in most local newspapers today reveals the list of companies sponsoring the lavish festivities marking the official canal. The price tag for the ceremony was originally announced at $30 million, but has been revised down to an undisclosed figure. 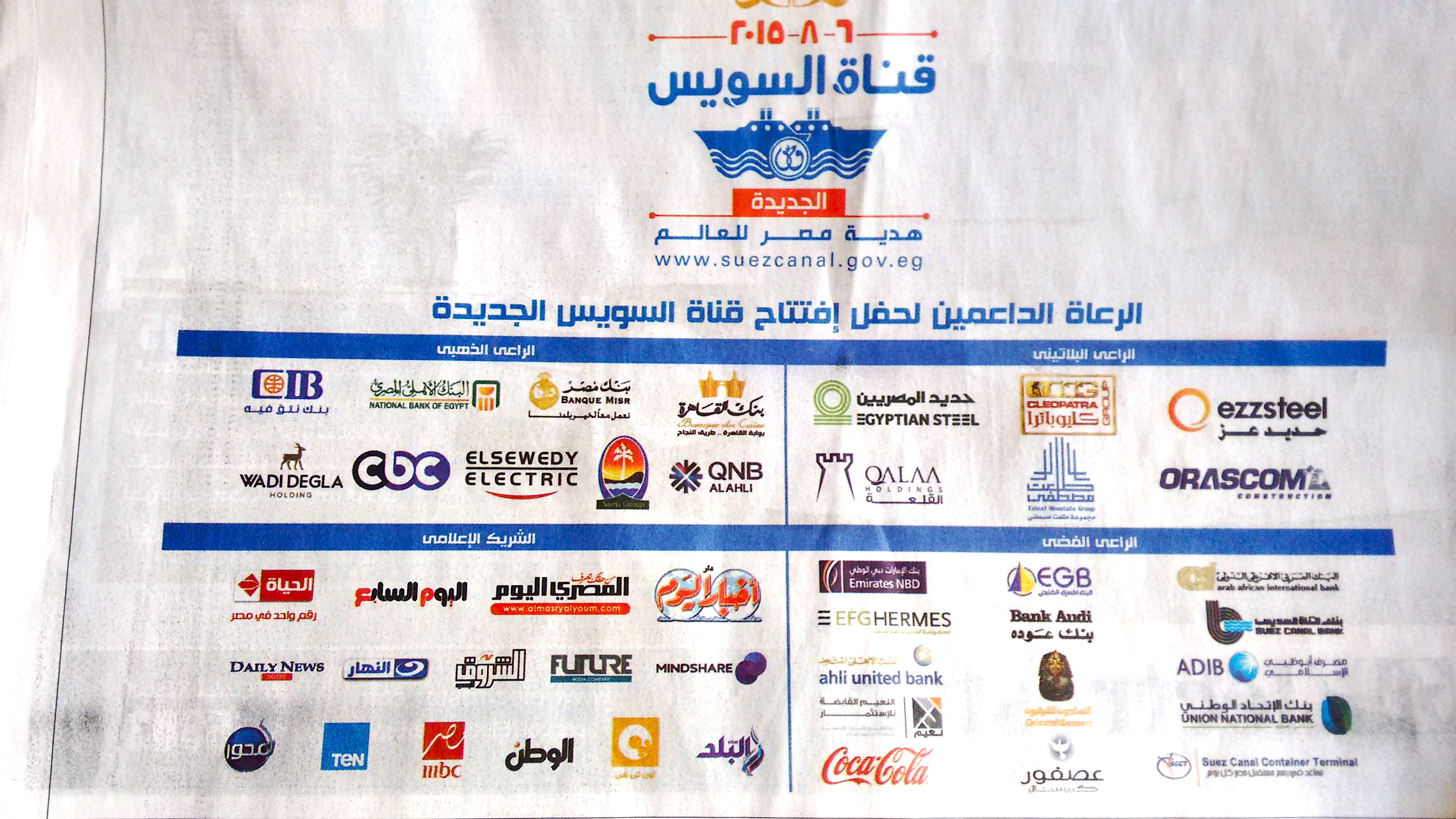 Sponsors are divided among platinum, gold and silver levels; the advertisement does not clarify what each level of support entails, and organizing firm WPP did not immediately respond to a request for information.

A likely hint of the magnitude of donations is revealed by one firm that is not on the list. According to Arab Finance, the Suez Canal Company for Technology Settling donated LE1 million to the inaugural ceremony. Either the donation, which was announced August 4, came too late, or it was not large enough to meet even the silver sponsorship level.

The platinum level of sponsors reads like a who’s who of Egypt’s business elite. First on the list is Ezz Steel, founded by Mubarak-era tycoon and politician Ahmed Ezz, who was released from prison last August after spending three years behind bars on corruption charges, and is currently awaiting retrial in another graft case.

Also on the list is property developer Talaat Moustafa Group, another conglomerate that has faced charges for its profitable ties with the Mubarak government. Its real estate arm has faced a protracted court battle over sweetheart deals for the state land it purchased for its Madinaty project, eventually being ordered to pay a LE9 billion settlement. The family’s most notorious member is Hisham Talaat Moustafa, who was sentenced to death in 2008 for the murder of Lebanese pop star Suzanne Tamim, a sentence that was reduced to 15 years imprisonment on retrial.

Egypt’s richest family, the Sawirises, are also represented via their Orascom Group. Although the family positioned itself as relative outsiders under Mubarak, their fortunes expanded under his presidency, and have skyrocketed since the revolution. The family supported Tamarod, the movement that sparked the June 30 protests against former President Mohamed Morsi, and Naguib Sawiris, the eldest brother, vowed his family would invest in Egypt “like never before” after Morsi’s overthrow.

Qalaa Holdings, formerly known as Citadel Capital, is also on the list. This well-connected company holds energy, mining, agrifood, cement and transport companies based in Egypt and other African countries. Among its members are former state owned gas company head Mohamed Shoeib, and numerous veterans of the region’s private equity firms.

Egyptian Steel’s Ahmed Abou Hashima is a relative newcomer to this platinum crew. The 40-year-old CEO — who is probably best known for his three-year marriage to pop star Haifa Wehbe — has been putting serious cash behind the government’s promotional campaigns. His company bankrolled the “New Egypt” campaign that put up tourism billboards around New York City in October 2014.

The gold sponsorship level is largely made up of banks, including state owned Banque du Caire, Banque Misr, and National Bank of Egypt, as well as private banks CIB and QNB. Wadi Degla holding company, Sama Group and El Sewedy company round out this tier, along with CBC, which is the only media company listed as a sponsor rather than a partner.

The silver level is more of a mixed bag, with 14 companies ranging from Asfour Crystal — a company that makes chandeliers and crystal knick knacks — to the Suez Canal Container Terminal. Eight banks and financial institutions donated at the silver level, while Coca-Cola is the only Western-based multinational to have sponsored the celebrations.

Topics
Related
Hani Sarie-Eldin
Q&A with Hani Sarie-Eldin: What is next after the New Suez Canal opening
Amira Salah-Ahmed | All eyes are on Egypt for the opening of what has been dubbed the “New Suez Canal.” Critics have
Forbes
Local media skews coverage of Forbes article on New Suez Canal
Wednesday’s newspapers were full of headlines about a report by Forbes allegedly celebrating the New