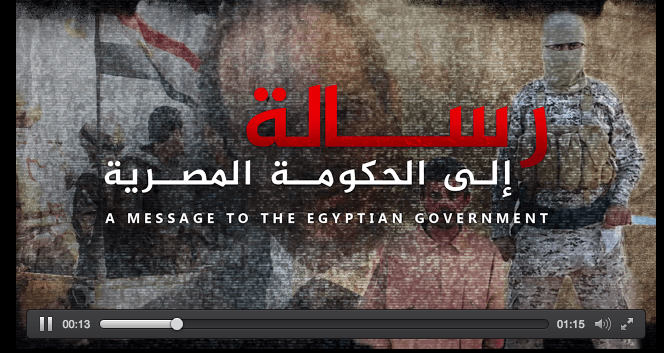 The Province of Sinai threatened to kill a Croatian citizen, kidnapped last July, in 48 hours, if the Egyptian government doesn’t release Muslim female prisoners, according to a video uploaded online Wednesday.

Tomislav Salopek, 30-years-old, was kidnapped on July 22 in Cairo while driving to work at a French-owned company, according to a statement by the Croatian Ministry of Foreign and European Affairs.

Salopek was stopped by a group of armed men, who forced him to get out of the car and drove away with him in an unknown direction, the statement read.

In the video, titled, “A message to the Egyptian government,” Salopek is shown on his knees in an orange jumpsuit, reading out a statement beginning with his name and age, as well as the name of his wife and two children. He continues to say he works at a French company in Maadi.

“The soldiers of the Islamic State catch [sic] me on Wednesday July 22, 2015,” he read. “They want to substitute me with Muslim women arrested in Egyptian prisons.”

If the Egyptian government doesn’t comply within 48 hours, he read, “the soldiers will kill me.”

Formerly known as Ansar Beit al-Maqdes, the insurgents changed their name after pledging allegiance to the Islamic State in November. The group has claimed responsibility for several major attacks against police and military personnel in Sinai and Cairo since 2013.

Most recently, it claimed a series of attacks on some of the most important security checkpoints in North Sinai, killing at least 17 soldiers.