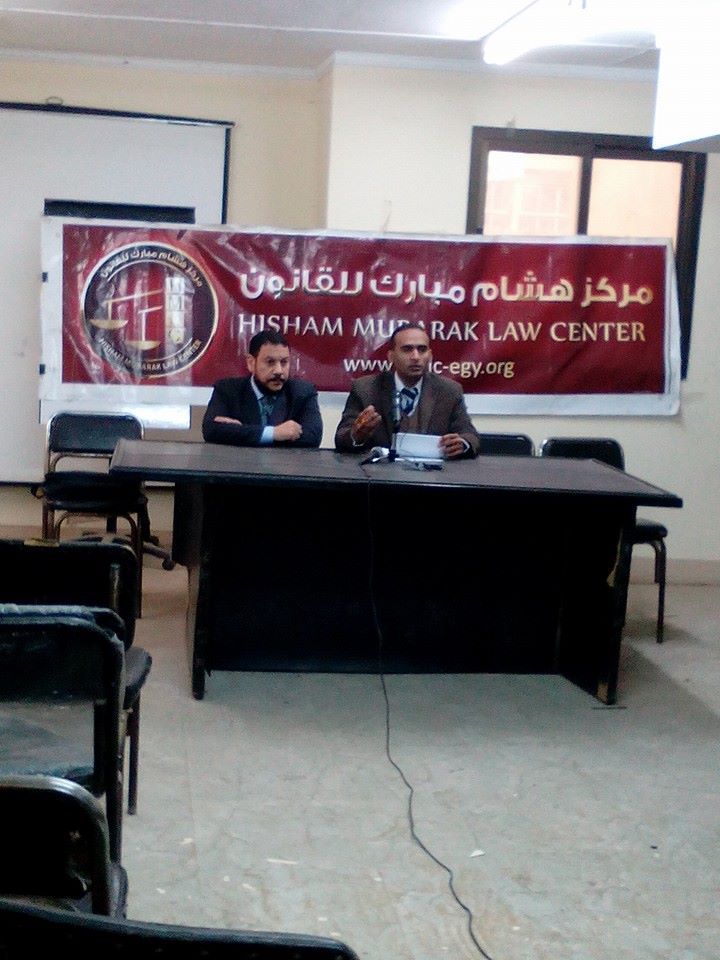 The committee, which is purportedly headed by an investigations judge, is tasked with investigating human rights organizations allegedly implicated in the controversial “foreign funding” case from 2011.

That high-profile case stems back to July 2011, when then-Prime Minister Kamal al-Ganzouri organized a task force to investigate the flow of foreign funding into Egypt following the January 25 revolution. At the end of that year, police and armed forces raided 10 non-governmental organizations (NGOs), and 43 of their employees were ultimately sentenced to one to five years in prison. Since then, this committee has sporadically investigated NGOs such as HMLC to check their compliance with the 2002 NGO law.

Hassan said he received a phone call from a committee representative informing him they had visited HMLC’s office, but found it closed.

“This is not true. The office is open throughout the working week. The representative told me that the committee wants to investigate the center as part of the foreign funding case,” Hassan explained.

Hassan asked the committee member to bring a formal letter from a judge authorizing the investigation, but the representative refused to do so.

“I was told that I could only see the letter, without having a copy of it, although it is my right to have the official letter to legally contest it,” Hassan asserted.

The Cairo Institute for Human Rights Studies (CIHRS) was subject to a similar probe by the same committee in June, when a group of investigators was sent to the center’s headquarters. A statement by 22 rights organizations condemning the CIHRS investgation reported that the committee was dispatched by the Social Solidarity Ministry, and tasked with examining the compliance of rights organizations with the new stipulations added to the 2002 NGO law concerning the receipt of foreign funding.

The law in question is widely seen as giving the state full powers over NGOs and their funding, as well as enacting other repressive measures.

President Abdel Fattah al-Sisi ratified the amendments to Article 78 of the Penal Code on September 21, 2014. The new articles stipulate sentences ranging from life-imprisonment to execution, along with fines reaching up to LE500,000, for illegally receiving foreign funds to support activities that threaten national security.

However, a ministry statement following the June probe into CIHRS denied any relation to the investigation committee, explaining that this was merely a judicial committee consisting of accounting experts who work directly under the supervision of the investigations judge.

“The foreign funding case is a sword against all rights organizations. It is used to feed the state of fear-mongering among rights organizations working on exposing the violations and wrongdoings of the state,” Hassan asserted, referring to the recent crackdown on CIHRS.

According to CIHRS, this specific investigation may be the state’s way of responding to CIHRS Director Bahey al-Din Hassan’s speech to the European Parliament Human Rights Committee on May 28, in which he lambasted rights violations committed by the current government

Hassan’s speech is said to have touched on issues of judicial independence in Egypt (or as he claimed, the lack thereof), increased restrictions on civil society and the harassment of rights activists, among other violations.

HMLC was established by leading late human rights lawyer and advocate Ahmed Seif al-Islam in 1999, and became a cornerstone of the human rights movement in Egypt. With two branches in Cairo and Aswan, the center is at the forefront of defending the rights of political prisoners, protesters and torture victims. During the 2011 revolution, intelligence forces raided the center’s downtown Cairo headquarters on February 4.

Prominent rights organizations are not the only targets of the ministry’s crackdown on civil society organizations. In January, the Foundation of Victims of Abduction and Forced Disappearance was prevented from officially registering as a human rights NGO with the ministry, due to failing to obtain adequate “security clearances.”

The foundation filed a lawsuit against the ministry in front of the Administrative Court, where a final ruling is expected to be issued on September 2. The ministry failed to present any evidence on why it denied permission for registration, the foundation claimed, adding that this proves the decision to register civil society organizations is not in the hands of the ministry.

Even civil society organizations registered under the law are slamming the ministry’s “illegal practices.”

Maat for Peace, Development and Human Rights, established in 2008, filed a complaint with the prosecutor general against the ministry after it refused to approve funding for the group’s public policy initiative.

In a statement, the organization said it “resents Ministry of Social Solidarity practices that emphasize the arbitrary approach in dealing with Egyptian civil society organizations, while the ministry’s practices stress the fact that the government does not distinguish between registered and non-registered organizations, and has a lack of respect for the law.”

*Correction: A previous version of this article stated that President Abdel Fattah al-Sisi ratified the amendments to the NGO law, instead of Article 78 of the Penal Code, on September 21, 2014. This was amended on August 2, 2015.

Topics
Related
Cairo Institute for Human Rights Studies
Authorities probe rights organization CIHRS
The Cairo Institute for Human Rights Studies (CIHRS) has emerged as the latest target in the state’s
Ahmed Seif al-Islam
Human rights in focus: A series of conversations
Mai Shams El-Din | This is an introduction to a series of interviews by Mada Masr with human rights workers in Egypt that
Egyptian Initiative for Personal Rights
EIPR to apply for registration under NGO law
The board of the Egyptian Initiative for Personal Rights (EIPR) has decided to apply for registration