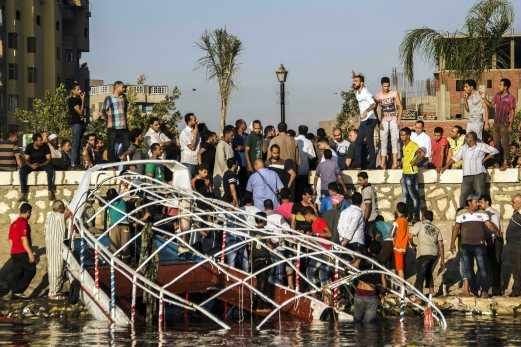 The number of casualties associated with the sinking of a small motor boat in the Nile River on Wednesday evening rose to at least 35 on Saturday, according to the Health Ministry.

Health Ministry Spokesperson Hossam Abdel Ghaffar told Mada Masr that 35 bodies have been retrieved from the Nile so far, adding that search operations are still ongoing.

Reuters-affiliated Aswat Masriya reported on Saturday that 37 bodies had been recovered from the Nile. Citing rescue workers, Aswat Masriya added that many of them are women and children.

Local media outlets confirmed that the captain of the barge was arrested, and remains in detention pending official investigations into this fatal accident.

The passengers aboard the motor boat were attending an engagement party on Wednesday night when disaster struck.

Families and friends of the deceased and missing passengers blocked a main road near the area where the boat sank, and angrily chanted anti-government slogans, Al-Ahram reported on Thursday.

Abdel Ghaffar told Mada Masr, “The Health Ministry has established specialized committees to assist the family members of those who perished in this accident, so as to offer them support, counselling, and immediate medical assistance, if need be.”

This is one of the deadliest accidents affecting maritime traffic on the Nile. There have been numerous cases of boats and ferries catching fire, as well as buses and other vehicles falling into the river, and, in April, hundreds of tons of phosphates were spilled into the river when a barge sank, but there have been few accidents that have proven this fatal.

Families of the deceased claim the government’s rescue efforts were not fast enough, resulting in the loss of nearly 40 lives.

Topics
Related
Environment ministry
Officials: Sunken Nile barge cannot be removed in one piece, phosphate spill not connected to Sharqiya poisonings
A barge that capsized on April 21, spilling 500 tons of phosphates into the Nile, will have
boat incidents
Fishing boat sinks in Red Sea, at least 13 dead
According to sources from Egypt’s Ministry of Health, at least 13 fishermen have died as a result of