He describes these paintings as similar to the ones people often purchase from Attaba — a district in downtown Cairo where you can pretty much buy anything and everything — to decorate their houses. He started noticing that the landscapes he was commissioned to paint were not Egyptian landscapes, but a mix of European landscapes that included foreign plants and flowers that would never naturally co-exist in the same setting. This realization led to Ahmed’s most recent solo exhibition, “The Fifth District,” which was held at Mashrabia Gallery from February to March, 2015.

In the exhibition, he created his own make-believe settings that echoed those mysterious landscapes that didn’t actually exist anywhere, but added characters to the familiar backdrops. Some characters were from images that circulated on the internet, some were from his dreams, and he even painted a few deformed figures. He thought, “If they can do it in Attaba, then why can’t I?”

Sabry began his life in Minya, and moved to Cairo when he started at Helwan University’s Faculty of Art Education in 2000. When I met Sabry in early June, he told me he had gotten married only three weeks ago, as he led me up five flights of uneven stairs to the couple’s new home in Ain Shams. His studio occupies a small room in his apartment. There’s a small window and a desk to one side, with both a laptop and desktop computer that he bought with the prize money he won from the Youth Salon in 2007. There are two beds in an L-shape pushed into one corner of the room, and a few wooden canvases and rolls of paper wrapped in plastic in the opposite corner. The small room still feels spacious somehow. It’s decorated only with a picture of his wife hanging above his desk. 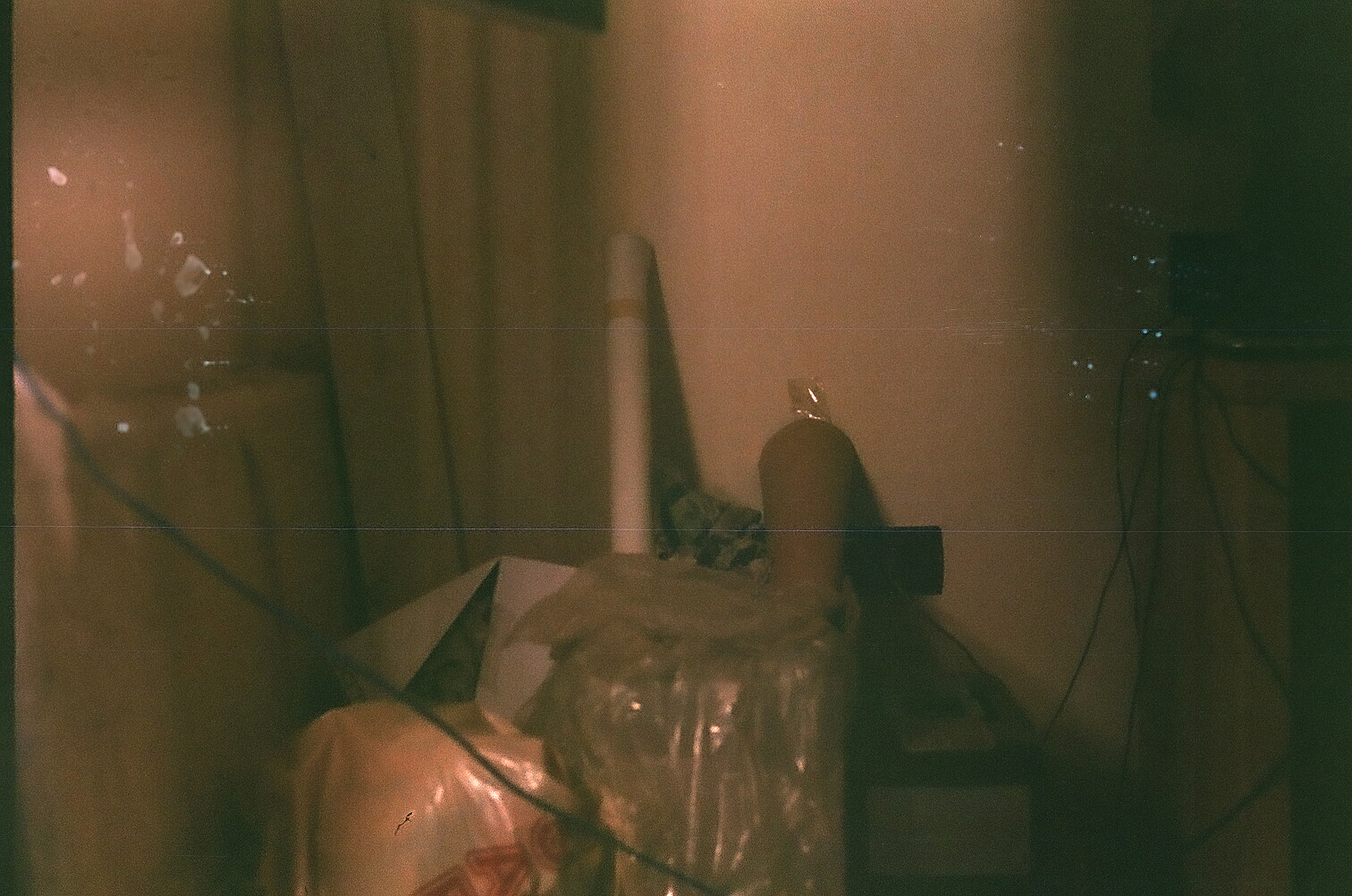 Sabry likes to work where he lives. Since graduating in 2004, he and his long-time friend and fellow artist, Mohamed Allam, have been hopping around Cairo, from Mohandiseen to Boulaq to Ardellewa — sometimes acquiring more settlers along the way, who were also searching for a place to live and work. Sabry describes the group as “the expatriates,” as they were all artists who were not originally from Cairo and only moved there for school. But now, it’s just him and Allam, he says, as everyone else’s families eventually relocated to the capital.

The last stop he made before moving to Ain Shams was Mounira. He lived and worked there for the past five years. There in his little room, his little TV would be constantly broadcasting news channels in the periphery of his workspace. His canvas would be propped up on the floor, and Sabry would be on his knees, painting.

He hasn’t started working in his new studio yet and is still getting used to the space, only using the room to surf the web for now, which is what he does all the time anyway. But he knows that when he feels like he wants to start working on something, his short relationship with the space will not be an obstacle. Moving around his whole life, he has become accustomed to working anywhere. What’s more important to him is feeling comfortable in the space, and sharing the apartment with his life partner, Wessam Quraish — who’s also an artist — definitely makes him comfortable. 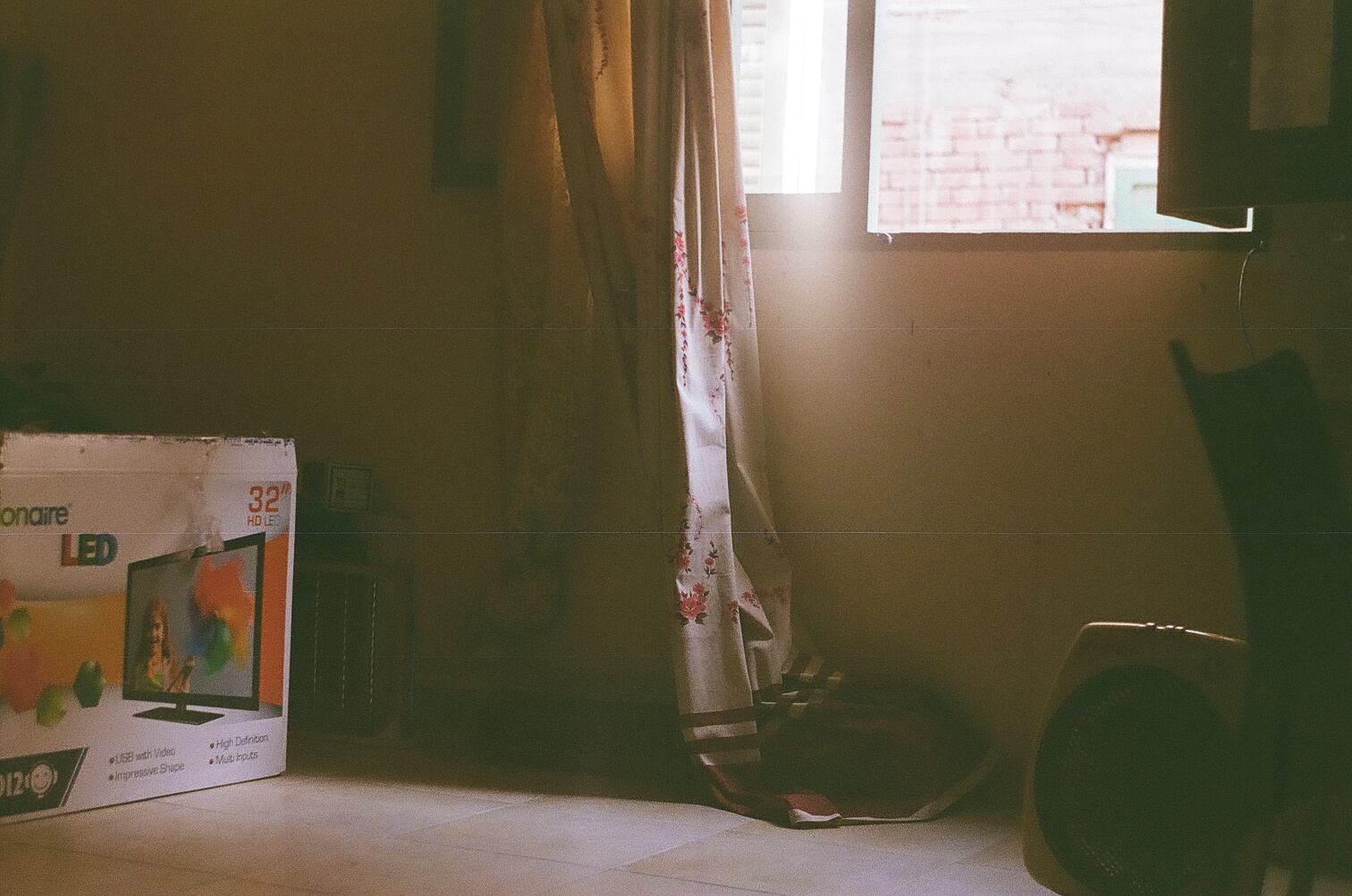 Sabry wants to earn a living from painting only , and he started painting commercially pretty early, in his third year of college. In addition to painting murals in people’s houses, he would paint the backdrops and various set accessories at photography studios around the city for cash in the summers. He tried to work a full-time job at a mosaic company, but could only keep it for 20 days — he just can’t do routine. At that point, he was also preparing his installation of wall drawings at the Ahmed Shawki Museum for the 2007 Youth Salon (that year, more than one venue was used for the grand exhibition, aside from the usual Palace of the Arts). He won his first Salon prize and immediately quit his job. That LE10,000 prize, he says, set the trajectory for where his life and practice then started heading.

He was able to afford a computer and connected it to his satellite, so that he could record videos and capture frames from the television’s stream, all with remote control. From then on, frozen TV frames became an integral part of his artwork. 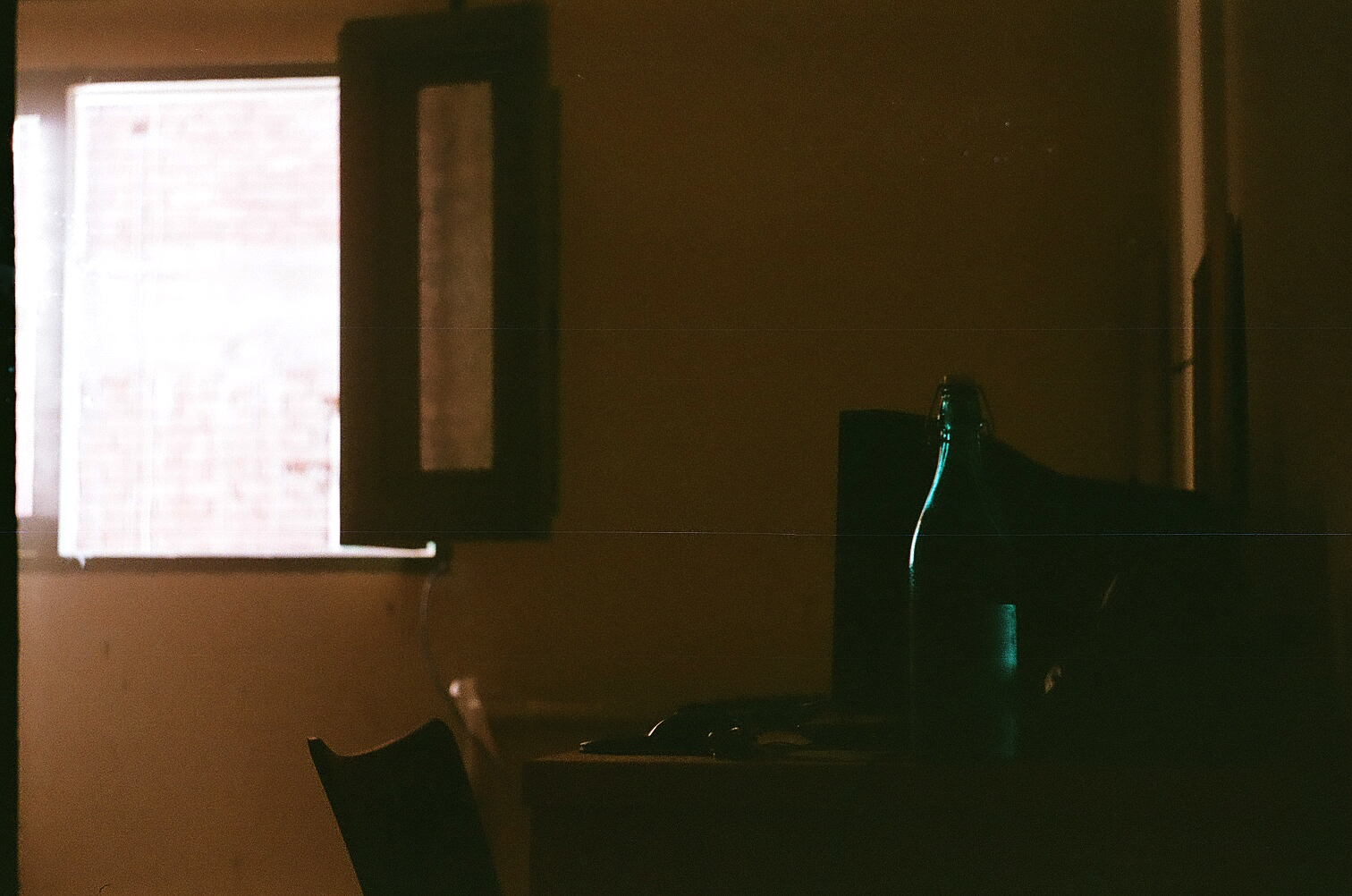 In 2008, he painted minimal, single-lined figures, and would even include abstract forms of himself on top of the frozen frames he captured. When he started manipulating the frozen frames and adding himself into the picture, he noticed that things turned out very flat. He didn’t know why he put himself in the paintings when he first started doing so, but thinking back, it is clear to him that he put himself in there to try and understand what exactly he was doing.

Sabry then started experimenting with painting the frozen TV frames in acrylic, keeping their digital aesthetic intact. At that time, he thought that this was what he was interested in exploring through his practice.

But looking more into the frames he froze, he started realizing that he was less concerned with the way he could make things look as “digital” as they appeared on his screen, and was more interested in the relationship between the text that would remain on the frame he froze, such as the subtitles or the news tickers at the bottom of the picture.

In his project El Brens TV, which consisted of 120 acrylic paintings that he again exhibited at Mashrabia Gallery, he watered down the composition of the TV frame a little and manipulated the images by adding phrases of his own — which sometimes alluded to pop culture or news that was buzzing at the time — in the form of a news strip or a subtitle, all with a kind of comical innocence whose banality was powerful.

He didn’t care about sending out a message or saying something of value with the texts he added. He didn’t mean for the texts to act as titles for their respective images, either; he just wanted to play with our understanding and reading of images.

With time, Sabry slowly let go of the digital composition and aesthetic, and he even stopped freezing frames and capturing streams off of his TV. His eyes started gearing more toward images that circulated around the internet, particularly on social media networking websites like Facebook. He would take different elements from each screen capture and combine them all on one canvas, sometimes adding anecdotal subtitles to the frames he was now reconfiguring for himself.

There is almost a negative proportionality between the amount of visual input that Sabry receives on a daily basis, and the depth of layers that make up his practice now. It seems like, by shedding away layers of heavy conceptuality that could be burdensome, and relieving weight off of his practice, he can gain focus on what he’s really trying to do. 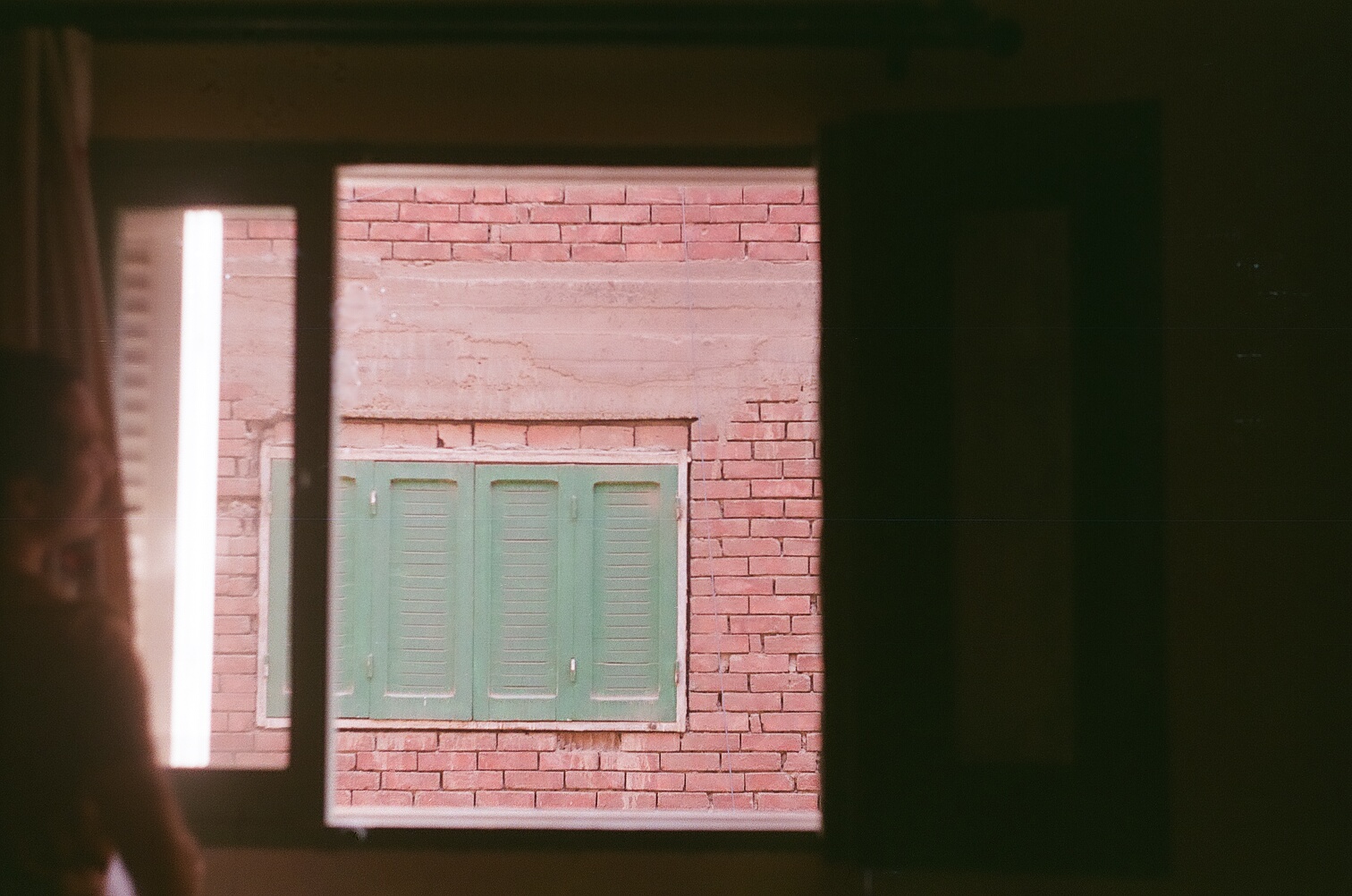 Sabry doesn’t mind placing himself in his paintings or including past personal situations in his artworks. He’ll mix in whatever he feels is related to whatever else he’s got. Back in 2010, he took part in a group exhibition at the Ahmed Shawki Museum that was curated by Wessam, called “The Left Side.” Every year, the museum commemorates the passing of the late poet it’s named after by hanging a giant banner of Ahmed Shawki himself on the exterior of the building. For the exhibition, Sabry printed a photo of himself as a child on a banner of equal proportions, and hung it in the same place where Ahmed Shawki’s visage would annually reside. He named the project El-Fawareeqa, after the name of the street he grew up on. At first, the museum authorities were afraid of getting in trouble with the culture minister and wanted to remove the banner before the minister toured the exhibition. But they decided to risk it anyway, and young Sabry’s innocent smile graced all the museum’s visitors throughout the duration of the exhibition.

Sabry always looks back at the things he’s done to try and find answers for why he’s doing what he’s doing, and what the relationship is between him and his work, and if the answers he came up with for those questions were ever real.

Now that Sabry’s way out in Ain Shams, getting downtown has become a little more difficult. But that doesn’t seem to bother him much, as he doesn’t see himself as very outgoing. In fact, he feels now that the extra effort it requires to make a trip downtown has enabled him to be more selective with how he spends his time, and in a sense, he feels freer.

Sabry doesn’t think you have to be interested in art to be an artist; he doesn’t feel the need nor the desire to visit every exhibition and follow the latest news of who’s showing what, and where. He feels he doesn’t have to look at art, and can look at other things.

He doesn’t think that you have to study art history to be an artist.

He doesn’t follow art news because his art is not about art.

All photographs by the author. Mada is publishing one part of Shehab Awad’s artists’ studios project each month. This project was carried out in the framework of MHWLN, a research and writing group dedicated to the history of contemporary art in Egypt.

AD
You Might Have Missed
Where do old lesbians go to die?
Carbon Colonies & A Green New Deal
Mugamma revisited: Reimagining the building and the square
What we talk about when we talk about trees
AD
Shehab Awad
3 articles on Mada