اقرأها بالعربية
Why can’t the police stop the bombs? 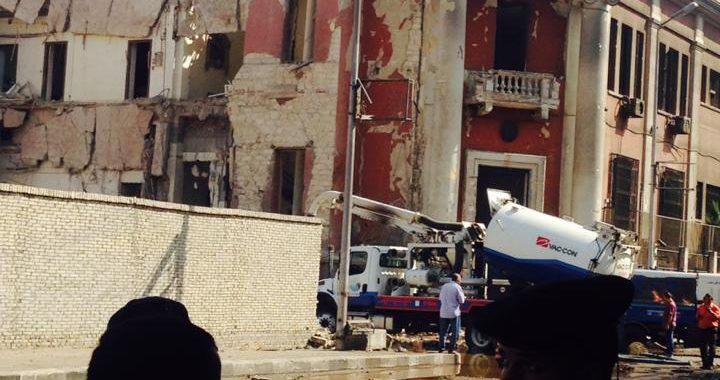 A spate of highly destructive bombings in Cairo and Sinai over the past two weeks has raised questions regarding the security forces’ ability to contain and prevent this deadly militant violence.

Around 6:30 am on Saturday, Cairo awoke to a resounding blast when a car bomb detonated in front of the Italian Consulate on Galaa Street in the downtown district of Esa’af. The attack reportedly killed a 26-year-old street vendor from Fayoum and injured 10 others, two of whom were still in the hospital receiving treatment as of Saturday night, according to the Health Ministry. Security sources told media outlets that the car bomb was detonated from afar, and preliminary investigations showed that the explosives-laden vehicle carried Suez license plates.

This assault occurred less than two weeks after Prosecutor General Hesham Barakat was assassinated in a car bombing in Heliopolis as he was on his way to work. This incident was followed just days later by several bombings targeting checkpoints in North Sinai, which claimed more than 100 lives, according to local sources.

The Islamic State (IS) has purportedly claimed responsibility for Saturday’s attack on the consulate in a statement that was widely shared on Twitter. The statement claimed that IS militants perpetrated the assault with 450 kg of explosives, and warned Muslims to stay away from security facilities, which were “legitimate targets” for future attacks.

Retired General Abdel Latif al-Bedeiny explains that it is extremely difficult to anticipate and prevent these types of attacks, as “you simply cannot prevent a car from driving down the street.” However, he says that if the Interior Ministry deployed proper security forces in districts where vital facilities are located, the number of bombings would decrease.

However, intensified surveillance alone cannot prevent terrorist attacks, Bedeiny warns. He says that the solution lies in breaking down the militant groups that perpetrate these assaults in the first place, and initiating an offensive against them.

“There is a widespread misunderstanding about the notion of security,” claims recently retired General Magdy al-Shahed. He explains that the police force follows a traditional school of thought when it comes to security, relying almost entirely on discipline and manpower.

But “security can’t rely on providing police personnel for every citizen, every electricity tower or every vital facility, or by increasing work hours or manpower,” Shahed argues. “There are other ways that can be more effective.”

Shahed believes that security forces should be able to predict the timing and location of attacks on most security checkpoints, and take guard against them. To accomplish this, he emphasizes the importance of a “surveillance and research system.”

For example, “big department stores have understood the importance of a different security system,” Shahed says. “They rely entirely on surveillance cameras and fewer security personnel. The same thing could be done to secure the streets.”

In many other countries, one rarely sees police officers in the streets — but if a problem erupts, they instantly appear, thanks to such surveillance systems, Shahed asserts.

He further explains that security is most fully enforced when “every citizen knows that if he or she violates the law, they will be punished. This is achievable only through such security systems.”

However, some within the Interior Ministry believe that implementing such a system would be too costly, claims Bedeiny. However, he maintains that the contrary is true — the ministry would actually save money by using fewer police personnel, who would only be needed if violent clashes break out.

Shahed calls for the implementation of more decisive procedures, such as reactivating the Emergency Law, which would allow for “detention and the surveillance of text messages and phone calls.”

“The state cannot fight terrorism with chained hands, and such procedures will force terrorism to return to the underground mode again,” Shahed argues, adding that “the state shouldn’t listen to the human rights groups. The police feel restrained by these human rights defenders — now, any human rights activist can file a complaint against a police officer, which usually causes negative repercussions for him and prevents him from doing his job.”

But Bedeiny vehemently disagrees with Shahed on this point. “The procedures that comply with human rights are enough to fend off such attacks, and the state shouldn’t violate the right to privacy — otherwise, it becomes a Nazi state.”

Shelving human rights issues in the name of security “would be more dangerous than terrorism. It would chase away foreign investments and tourism, and would alienate us from the rest of the world,” he argues.

“Strategic thinking mandates that you acknowledge the consequences of your actions, and it would be illogical to take certain measures to solve a problem that would then create other political and economic problems,” Bedeiny explains.

Aly al-Raggal, a socio-political researcher and security analyst, offers a different view on Saturday’s attack. He believes that the aim of the Italian Consulate bombing was to prove that the Islamic State is capable of executing an operation in the heart of the capital, even with a heavy security presence. The attack would thus send a message to the security apparatus that the militants could reach any location. Furthermore, by targeting a foreign entity, the IS would make the state appear weak to the international community, Raggal asserts.

And in addition, the Interior Ministry’s performance in the midst of these attacks is “not up to par,” the researcher argues.

Raggal attributes the ministry’s failure to its inability to disengage from dated practices. “In the 1990s, the Interior Ministry decided to infiltrate society, which caused an increase in the number of low-ranking police officers, informers and thugs to control certain areas and to combat Islamists. At the time, such networks succeeded in having the upper hand over society, but it won’t succeed this time,” he asserts.

“The regular methods and the old networks of police personnel and thugs will not stop terrorists or help infiltrate their organizations,” Raggal warns. It will just “worsen the situation and create more failure.”

AD
You Might Have Missed
Mugamma revisited: Reimagining the building and the square
Carbon Colonies & A Green New Deal
Where do old lesbians go to die?
What we talk about when we talk about trees
AD
Mostafa Mohie
63 articles on Mada

Topics
Related
attack on Italian Consulate
Update: Islamic State claims responsibility for Italian Consulate attack
A car bomb killed at least one person died and injured seven others after it detonated in front of the
anti-terrorism law
As gov’t scrambles to ratify anti-terror law, critics fear for human rights
In the wake of last week’s deadly attacks in Sinai and the assassination of Prosecutor General Hesham
attacks on checkpoints
Province of Sinai describes North Sinai attacks in statement, photos
The Islamic State-affiliated militant group Province of Sinai released a statement Friday addressing
Ansar Beit al-Maqdes
5 preliminary observations on Sheikh Zuwayed attacks
Sherif Mohie Eddin | News of a series of coordinated attacks on some of the most important security checkpoints in North Sinai