اقرأها بالعربية
Wikileaks: Saudi Arabia and Azhar on the ‘Shia encroachment’ in Egypt 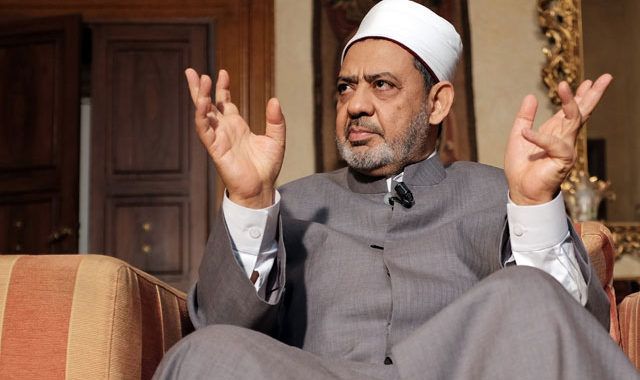 By
Shady Zalat and Mohamed Hamama

Several of the Wikileaks documents, which Mada Masr has exclusive access to through a memorandum of understanding, demonstrated Saudi Arabia’s concerns with the issue of Shias in Egypt.

In a “secret” cable sent on May 30, 2012, former Saudi Foreign Affairs Minister Saoud al-Faisal sent a report to the Saudi prime minister on the activities of the Saudi ambassador in Cairo, for what he called “resisting the attempts for Shia encroachment in Egypt.”

Faisal went on to claim that the Ahmed Qattan, the Saudi ambassador in Cairo, had confirmed that most religious institutions and figures in Egypt “reject the holding of Shia gatherings in Egypt.” Among these institutions and figures mentioned in the cable are former Al-Azhar Grand Sheikh Mohamed Sayed Tantawy, some members of the Islamic Research Center, the Ansar al-Sunna al-Muhammadiya group, Al-Gamiyah al-Shariyah Association and others.

Among these figures, the name of Salafi preacher Mohamed Hassan was mentioned twice. Faisal noted a conversation between the Saudi ambassador and the Islamic preacher, in which the latter said that he spoke to Tantawy about “the danger of attempts by Iran to hold Shia gatherings in Egypt,” and he asked the ambassador for the kingdom to take on a supportive role in resisting these attempts.

The cable includes an update by the Saudi ambassador on Hassan’s efforts on this front, mentioning a press conference that the Salafi preacher held with Al-Azhar’s sponsorship “to resist the Shia encroachment by publishing books and jurisprudence periodicals, and holding seminars and conferences in clubs and youth gatherings to warn of this sectarian danger.” 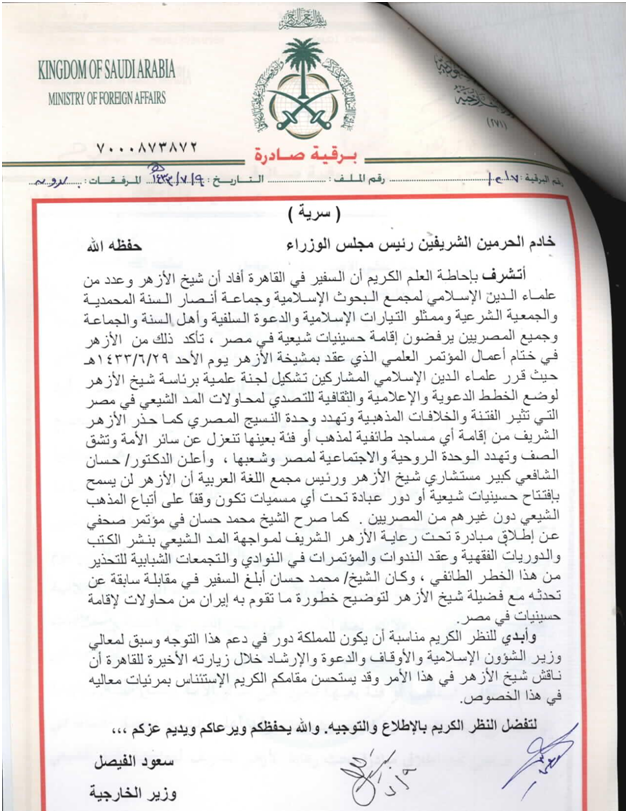 Other documents that Mada Masr has consulted reveal Saudi’s consistent anxiety regarding any rapprochement between Egypt and Iran, whether on the government level or that of religious institutions, especially Al-Azhar.

In a cable sent on July 2008, Faisal tells the head of the office of the Saudi cabinet that the kingdom’s ambassador in Egypt was deeply concerned about “a new Iranian attempt to infiltrate Al-Azhar.” These attempts consisted of a request presented by the head of Iran’s Interests Section in Cairo to Tantawy to open Azhar institutes in Iran, whose graduates would join Al-Azhar University “as a core for enhancing cultural and religious cooperation between Egypt and Iran.”

The cable also shows that Tantawy liked the idea, and initially consented to admitting Shia students to study in Al-Azhar. The cable goes on to express Saudi’s worries about “the number of writers who have announced their Shia identity.” 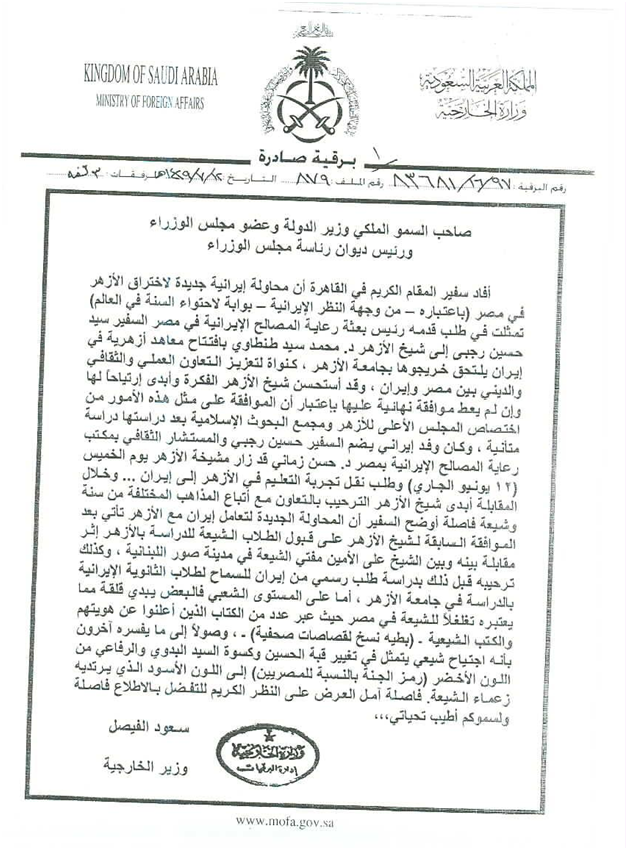 Under Tantawy, in 2007 Al-Azhar allowed Shia students to enroll in Al-Azhar University. Tantawy said at the time that “Al-Azhar teaches its students all Islamic ideologies, including the Shia, even if to a lesser extent than the Sunni, but this doesn’t prevent the admission of Shia students as Muslims first and foremost. Al-Azhar cannot close its doors in the face of any Muslim, as long as they fulfill the criteria for admission.”

Several months after that cable, in September 2008 Saudi Prime Minister Abdullah Bin Abdel Aziz sent a cable to the Saudi heir and the head of the Supreme Council for Islamic Affairs, also labeled “secret.” The cable reports the “reservation” some Egyptian security authorities expressed to the Saudi ambassador regarding “repeated Iranian visits in Egypt on several levels,” including Iranian researchers coming to Cairo with undisclosed Iranian support. The cable also reports Iran’s request for Egypt’s support in a partnership with Africa through the African Summit headed by ousted President Hosni Mubarak. It adds what the previous document considered symptoms of Shia encroachment in Egypt, including “changing the cover of the domes of important mosques from green to black.” 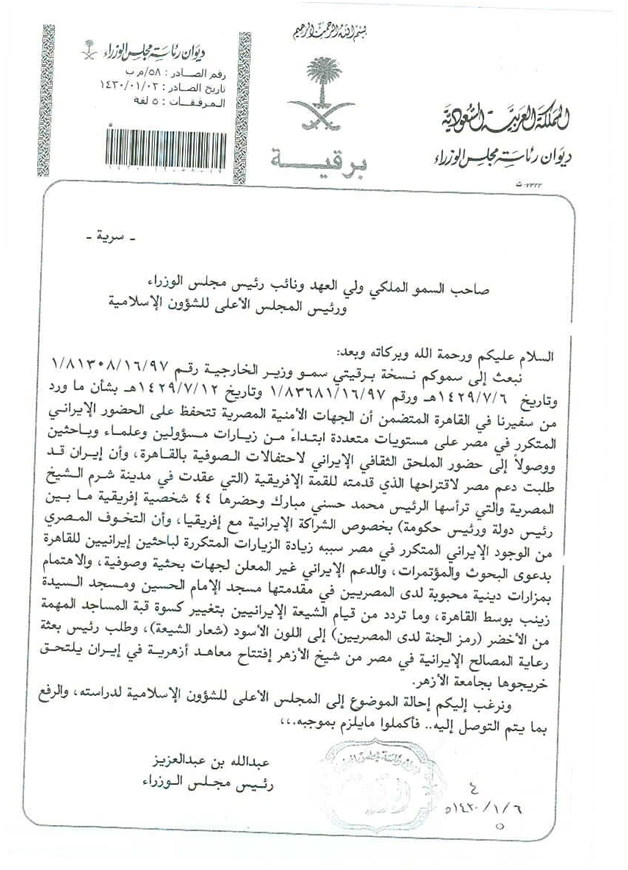 The first batch of documents, which Wikileaks started publishing in mid-June, also revealed the kingdom’s concern with the Shia issue in Egypt.

One of the documents published on the website, which was sent by Faisal to the chief of the royal staff, claims that Egyptian media personality Mostafa Bakry met with Qattan, and told him that the Iranian government started contacting a number of Egyptian media sources in an attempt to appeal to them. Bakry purportedly said that he didn’t think the Egyptian public would respond to them, but suggested that the kingdom intervene to resist this movement.

Bakry then expressed his desire to turn his weekly newspaper into a daily, found a political party and launch a satellite TV station that would be “a strong voice against Shias,” according to the document.

Another document in the first batch of Wikileaks was sent by the head of the Saudi intelligence to a number of bodies in the kingdom, including the Foreign Ministry. The document tracked the “movements of Shia in Egypt,” and claimed that “the Shia sect has found a vast space to expand after the January 25 revolution,” and that a state of confusion and instability and the absence of state security has helped it do so. The document went on to claim that “the Shia movement took advantage of this opportunity and doubled its activities, raising the bar for its demands.”

Faisal sent another “secret and urgent” cable to the Saudi king and prime minister that said the Al-Azhar sheikh met the Saudi ambassador in August 2010, and told him that the Iranians were pushing for a meeting for rapprochement between different sects, and that the Al-Azhar sheikh “didn’t want to make a decision in this regard before coordinating with the [Saudi] Kingdom about it.”

Then, in September 2011, newly appointed Al-Azhar Grand Sheikh Ahmed al-Tayyeb condemned “the attempts to propagate Shia beliefs in Sunni countries, especially Egypt, and next to the minaret of Al-Azhar, the bastion of the people of Sunna.”

Amr Ezzat, a freedom of religion and belief officer at the Egyptian Initiative for Personal Rights (EIPR), says that Al-Azhar cannot be dealt with as one body with a unified intellectual reference. He considers it a jungle of diverse ideas and religious directions, with the Al-Azhar chiefdom at the top, which has the authority to coordinate with several political players, given that its main concern is maintaining stability.

That’s why Al-Azhar continues to play an essential role as an institutional alternative in moments when the state needs to resist political religious movements and crack down on them, according to Ezzat.

But in general, Ezzat thinks that the concept of “Shia encroachment” is highly exaggerated.

He adds that the Saudi government is afraid of the increase of Iranian influence in the area because of the Shia population that lives in East Saudi, which is close to the Shia communities of Iraq, Iran, Syria and Lebanon, who are considered enemies of the Saudi regime.

But he says that there’s an overestimation of the relation of Shia communities outside of Iran. For example, Ezzat says that a group of Egyptian Shia who decided to demand their rights to practice their beliefs and rituals after the 2011 revolution has a deep political disagreement with Iran.