It’s a thunderous evening in East Berlin. A dented, chipped metal door is propped open, inviting passersby inside for dry refuge. Taped on the weathered door is a cardboard sign with “Fehras Publishing” written in Sharpie and an arrow pointing up a dark stairwell.

I was told that this German Democratic Republic-era factory is one of the few buildings in the area that survived the rise, expansion and fall of the notorious Berlin Wall. Now, the former railway factory has been transformed into the Flutgraben cooperative art and exhibition space, which started as a squat in 1996 and has grown into a non-profit organization housing 40 artist studios, exhibition rooms and a club. It’s also the physical hub for three displaced Syrian artists, Kenan Darwich, Omar Nicolas and Sami Rustom, who just launched their new publishing house on June 27 with a project focusing on archival practices — an effort to create discursive alternatives to a history lost in rubble.

Moving through the building, there’s graffiti and tags scribbled all over the walls. Etched in all sorts of handwriting and a range of vernaculars, these traces of past presences act like a living archive of those passing through the changing times. The exhibition, “When the Library was Stolen,” is upstairs in a massive rectangular room resembling a dismantled factory, in which the artists laid out several small photographs on long tables. A wall in the back holds two evenly spaced rows of larger photographs that combine to create an image of someone pulling a book down from a shelf. 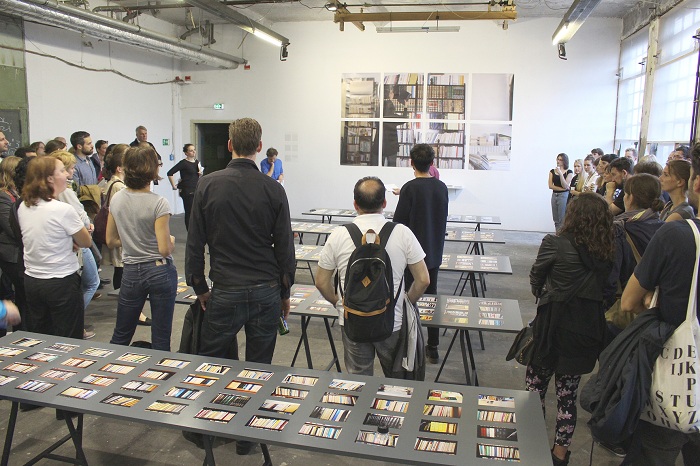 Opening of When the Library was Stolen

The 70 or so young art-goers and hipster-types attending the opening peruse the aisles just as they would in an actual library, looking at photo after photo of the thousands of book bindings from the recently raided library of renowned Saudi-Iraqi author Abdel Rahman Mounif (1933-2004). There’s a grid-like element to the whole scene, and the way the photos are presented in a symmetrical assemblage of clean lines makes the images appear like coordinates on a world map. But instead of measuring geography, these metaphorical coordinates point toward socio-political and cultural moments within the Arab region.

The three artists gather around a long wooden table with a shiny Mac computer in a performative manner, their backs against a wall of small boxy windows that sharply align with the gridded exhibition. Darwich begins presenting the work, but as he starts, there’s a rumble of bass from the dance club next door that gradually drowns him out. The audience, mostly made up of Berliners and some familiar faces from Egypt, Iraq and Syria, all smile patiently as Darwich pauses. There’s something befitting about Berlin’s contemporary urban archive — in the form of techno music — creeping into the launch of a Syrian publishing house dedicated to atypical archives of experience.

The musical interruption, the artist’s talk and the photos themselves all hint at the inherently abstract nature of the archive, which can be reshaped by the artist’s imagination as a form of resistance against cultural erasure, particularly as a result of war. The notion of the archive has been thoroughly mined as both a practice and subject matter by artists in the Arab region for years, to the point that the “archive fever” of the mid-2000s or post-2011 has been replaced by more of an archive fatigue. But there’s a particular, personal urgency to this project. Through their archival practices and vision, Darwich, Nicolas and Rustom are pinpointing their own coordinates on a map that is otherwise being wiped clean by the destructive war in Syria. 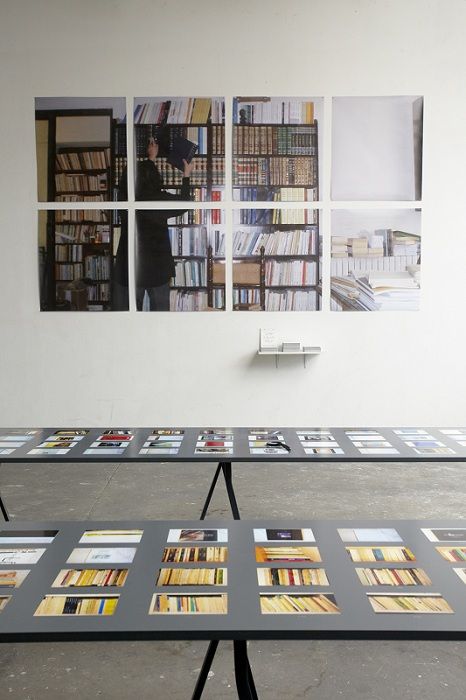 When the Library was Stolen, install view

When the library was stolen

“When the Library was Stolen” is the first iteration of Fehras’ ongoing project, Series of Disappearances. The collection of published materials will examine the relocation of knowledge in and out of the region due to various economic, political and social changes — for example, via the displacement of libraries and books.

The trio was taken by the story of Mounif’s personal library, which resides in Damascus. The Jordan-born author has lived in capital cities all over the world, such as Beirut, Cairo, Baghdad, Kuwait City, Amman, Paris, Tokyo and Belgrade. In his lifetime, Mounif’s library grew as he moved from city to city before settling down in Damascus, until he finally collected more than 10,000 titles that reflected the development of the publishing scene in several Arab countries across the decades.

Soad Qadra, the writer’s wife, issued a statement in early 2015 claiming that several books, including rare unpublished manuscripts, personal notes and hundreds of letters, were stolen from the library, while other items were damaged or vandalized by unknown assailants. This story was told and retold across several media platforms, thus opening a debate on the profound loss of cultural heritage amid the ongoing war in Syria.

“The story attracted us,” Darwich says. “The idea of these books moving with [Mounif] across the Arab cities directly speaks about the movement of knowledge in a symbolic way. The robbery holds certain symbolism. We researched the library topic. We were looking at the journalistic archive about the robbery, but also the journalistic archive about him during his life.”

“He’s one of those writers who leaves space in his books for other writers to contribute,” Nicolas adds. “We felt his library was like a tree, or a spider web or a fabric. It’s not just about his work, but the others around him.”

These aspects drew the three artists to focus on the Mounif library for their first Fehras-produced publication. At the June 27 launch and exhibition, they published a small booklet functioning as a provisionary draft of a catalogue of the library, which they hope to turn into a comprehensive Arabic-English index once they secure funding. 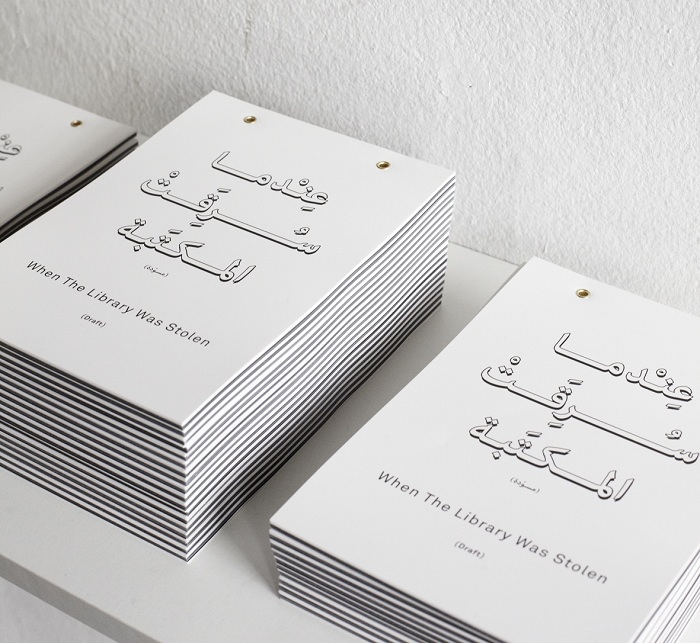 When the Library was Stolen publication

The draft publication, When the Library was Stolen, includes a bilingual introduction to Mounif’s story, followed by an index of some titles and photographs of the actual bookshelves commissioned from Syrian photojournalist Al-Mahdi Shubat in Damascus. The final publication will include more essays about disappearing libraries, a reflection on the displacement of knowledge in the Arab world and the full index of the library.

The Fehras team built the exhibition and publication out of the 350 photos Shubat took.

“These photos speak of more than the library, which is prone to destruction given its location in Damascus. Through the titles you can read more into the politics, culture, society, immigration, the region, our relationship with the rest of the world,” Nicolas says. “When you read the book titles you are also looking into several decades, from the 1950s to the 2000s. You look at various political and social changes, ideas that came and went, publishing houses that existed and do not anymore, public versus private publishing. You see the movement of Arab publishing across decades through this library.”

“We’re also concerned with how this private library became a public one. Since his wife announced the books were stolen, it somehow shifted its nature to a public wealth,” Darwich adds. 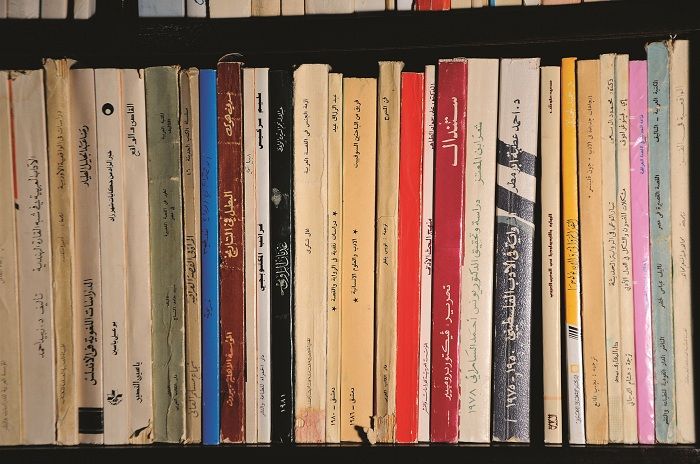 The three young men came together in Berlin in October 2014. They tell me that Fehras was born out of their conversations about Arab archives, from photographs to radio spinets, to films and books and television series. They each come from different backgrounds: Rustom is a journalist and archivist who only left Syria for Berlin in 2013, while Darwich has been in Germany since 2001, studying and teaching art and curating in Kiel and Leipzig. Nicolas, on the other hand, came to Germany in 2008 to study art and has been working in book design, typography and, most recently, performance art.

“We all are concerned with publishing, but with different perspectives. Sami is looking at publishing as an archive. Kenan looks at it as books or art. For me, I share the perspective of publishing as art or books, but also as performance and literature and typography,” Nicolas explains.

Through Fehras, the artists hope to focus on four main issues, the first being the problem of disappearance. Another long-term project, The Series of Listenings, explores sound publications in various forms by examining archival materials from radio interviews, cinema sound, audio archives, poems and music, including, for example, a recording of Om Kalthoum reading a poem on Egyptian radio.

Nicolas explains that while working on this project, the artists were asking themselves, “What is the meaning of a singer reading poetry and being published in this manner? How can publishing take different forms? What is the relationship of publishing with sound?”

Under this series, they are also exploring the story of the Palestinian radio station Sharq al-Adna (Near East Broadcasting Station), which was founded by British forces and first started broadcasting from Jaffa in 1941, becoming a robust player in both artistic production and media development at that time. After its staff declared support for Egypt during the nationalization of the Suez Canal in 1956, they were dismissed and the station was handed over to the BBC shortly thereafter. Its archive was not accessible until 10 years ago, when the BBC opened it up to researchers.

The third investigation, The Series of Institutional Terms, examines the published cultural language of the East Mediterranean and North African region and its shifting vocabulary. The artists look at these shifts in light of the displacement of the region’s intellectuals along with the emergence of new cultural institutions and their relationships with the global art sphere.

Darwich gives as example the first edition of the Arabic translation of Edward Said’s Orientalism by Syrian poet Kamal Abu Deib, published in 1981. “The first 20 pages are a dictionary of the terms Said used in English that didn’t exist at the time in Arabic, so they needed to be established. This opened a question of, ‘Why do we need a dictionary from English to understand how foreigners look at us as Arabs?’”

And things are not much different today, Darwich continues. “Now, if you look at catalogues of contemporary art in the Arab world, you read them and you feel like you’re reading a foreign language. They come up with new terminologies. Sometimes it feels like a new language, but fact is it is just a translated language.”

The fourth major project is the Atlas — a collection of photographs relating to books, reading and publishing from the region, intended to function as a visual archive of public, private and street libraries along with local reading customs.

For the moment, Fehras is operating from its founders’ pockets. Later, the artists hope to secure funding for their projects and also produce translations of Arabic books to sell. They are hopeful about the future of the publishing house, they say, as it comes at a time when, more than ever, the rich cultural heritage of the MENA region needs to be reexamined, remembered and shared.

Topics
Related
archives
Empty archives: What do we do with what we do not know
Laura Cugusi | In the era of hypervisibility the invisible is acquiring a new relevance in the dynamics of power that
American University in Cairo
Who do stories belong to?
Laura Bird | Do stories need authors? Are texts fixed? Is adaptation a form of translation? These are some of the
Cairo Literature Festival
The Cairo Literature Festival: Between splendid and prosaic
Sara El Adl | The first Cairo Literature Festival began with a summoning to old Cairo on February 14. The name Orhan
literature
How I learned to stop worrying and embrace the Kindle
Lara El Gibaly | For the first time in my literate years, after attending the MENA. Online. Literature. Today. conference