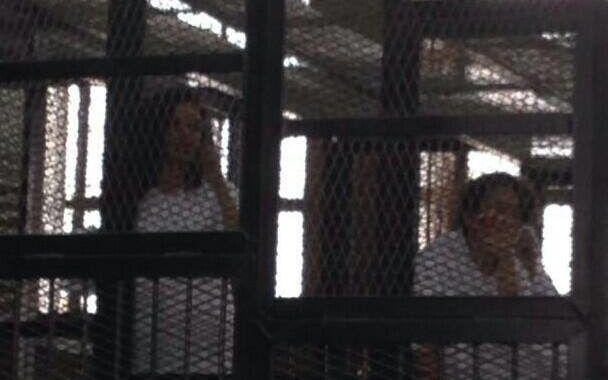 A list of 165 detainees pardoned by President Abdel Fattah al-Sisi on Wednesday for the holy month of Ramadan did not include detainees in major protest-related cases that activists and politicians have been lobbying for in recent months. The move is seen by observers as a gesture indicating the state’s sympathy toward the youth without counting as a real political concession.

A report published in Al-Shorouq newspaper reveals that most of those pardoned were convicted in protest cases related to the Muslim Brotherhood.

The decision pardons 44 protesters sentenced to two years imprisonment on charges of arms possession, joining a terrorist organization and vandalism. The case dates back to a protest held by Muslim Brotherhood supporters following the forced dispersal of Rabea al-Adaweya sit-in in August 2013.

Only one detainee, Moataz Ragheb, from the “Ettehadiya Protest” case was released. In this case, 23 people were sentenced to two years in prison for holding a protest in June 2014 in violation of the Protest Law. The defendants include renowned activists Yara Sallam and Sanaa Seif.

The list of pardoned detainees doesn’t include any female detainees.

“The regime has a problem with political figures. They’re not just young people who were arrested at a protest, they’re considered political adversaries and [Sisi] has a problem giving concessions to them,” says Akram Ismail, a member of the Popular Alliance Party.

Lawyer Mahmoud Belal commented on the decision by saying that any pardon for protest-related cases that excludes the “Shura Council” case, which he says is the first and main Protest Law related case, is a sham.

In the Shura Council case, 21 defendants were sentenced to three to five years in prison for charges related to a protest they held in November 2013 against the military trial of civilians, two days after the Protest Law was passed.

Khaled Daoud, the spokesperson for the Dostour Pary and one of the political figures involved in talks with the government regarding detainees in recent months, says that he is disappointed with the decision. Daoud asserts that the presidency has repeatedly promised him and other political figures that the seven girls detained in the Ettehadiya case would be included in pardon decisions. He says that going back on that promise discredits the efforts that were made and makes it difficult to convince the youth to participate in the political process.

Daoud asserts that the Ettehadiya case and other cases that were excluded from the decision fit the criteria announced for the pardons, as the detainees have spent more than half of their sentence and are charged with misdemeanors.

AD
You Might Have Missed
Carbon Colonies & A Green New Deal
Mugamma revisited: Reimagining the building and the square
What we talk about when we talk about trees
Where do old lesbians go to die?
AD
Heba Afify
117 articles on Mada