The orchard keepers
By
Bryony Dunne

Sinai, the land of extremes, is mostly in the headlines these days due to land disputes, drug trafficking or religious violence. But beyond the headlines, hidden in South Sinai’s mountain valleys, lie hidden orchards — tiny patches of green life dating back to biblical times and tended to by dedicated Bedouin from the Gabaliya tribe. I traveled to the Sinai desert in 2012 to photograph the remaining Gabaliya garden owners. The orchards could only be reached on foot through steep passes, so each morning I would hike to search them out. Sometimes I would just go for the day, and others for a week. Every orchard has its own distinct character, manifest in the way the walls were built, the crops that are grown and how they are stored and used. Some are meticulously maintained and are an essential source of food for families. Others are more symbolic. In one, a pair of old olive trees has been kept in memory of a family that spent many summers there. In addition to this photography collection, which has been published in a photo book, I produced a documentary film about the orchard keepers. The film describes the tender trap between a deep and meaningful tradition and the encroaching claws of modernity. The film will be screened and the book presented by Maria Golia (author of photography and Egypt) on June 10 at the Contemporary Image Collective (CIC) at 7 pm. www.TheOrchardKeepers.com 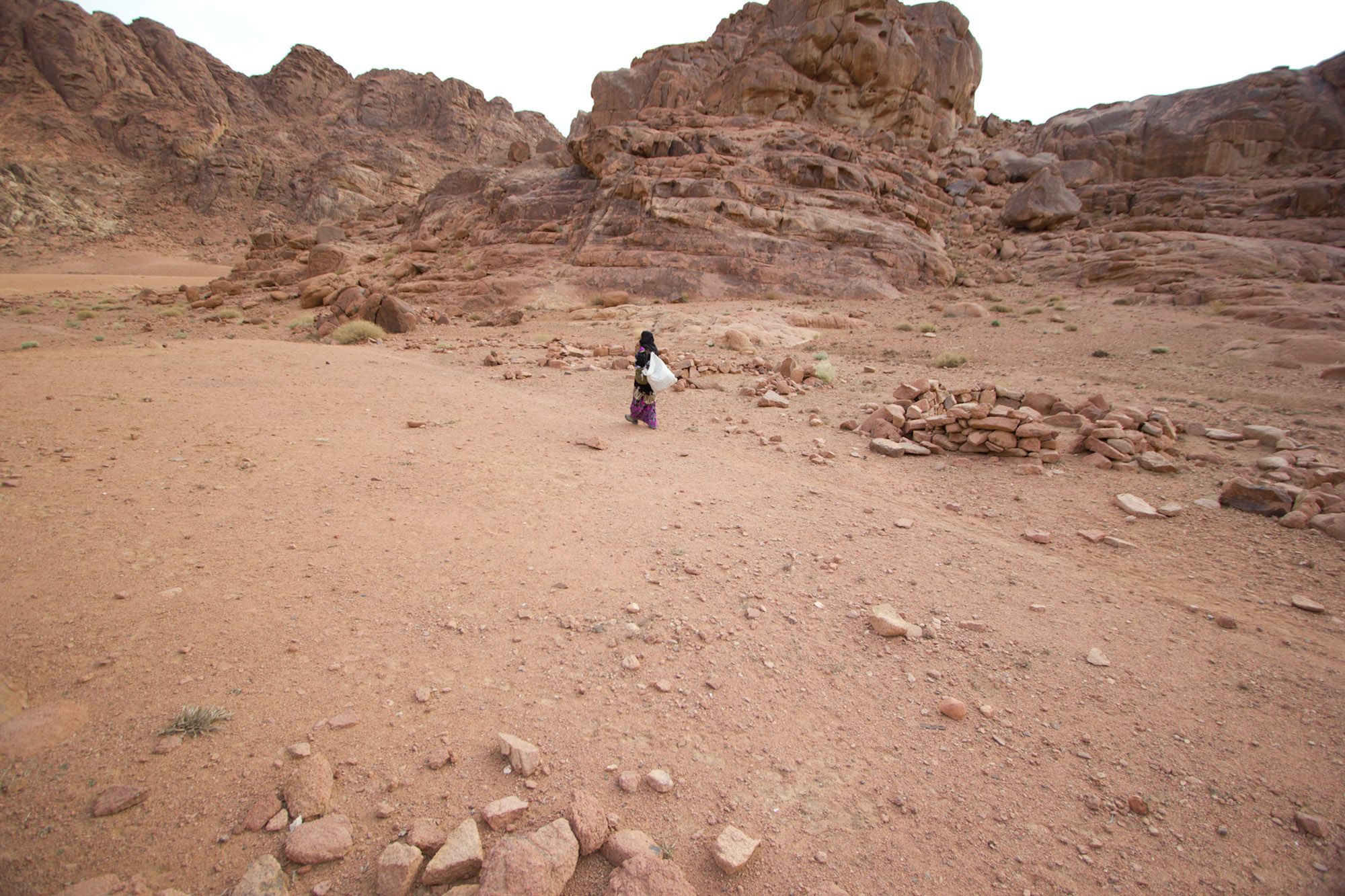 At the age of seventy, after raising six children in the village of St. Katherine, Amariya Faraj Musa went to live and restore her family’s orchard in Wadi Zawatin. She lives by herself in the orchard, which is about a four-hour hike from the village. 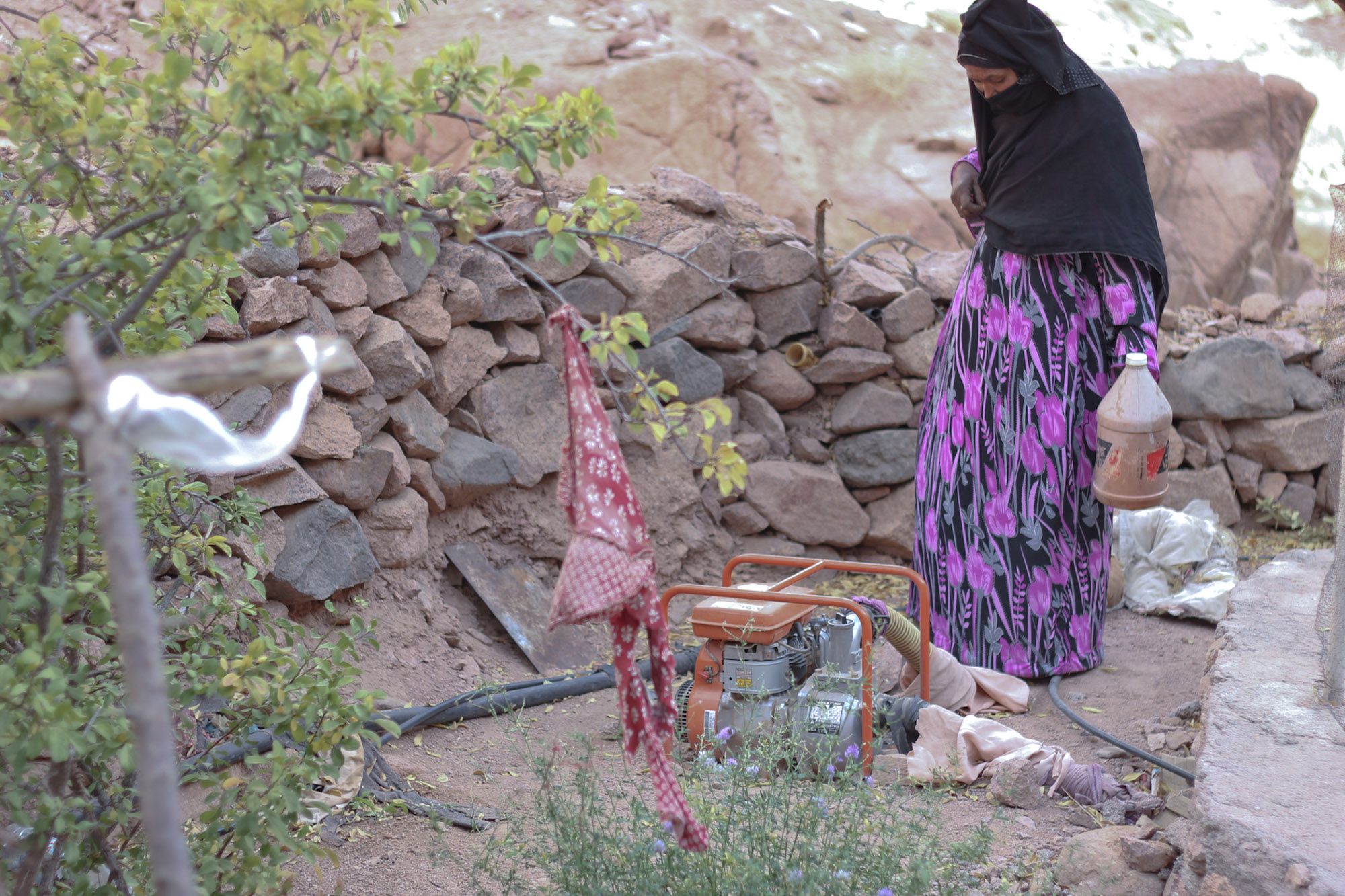 Her father was an orchard keeper and she spent her childhood in his garden, the same one she maintains today. 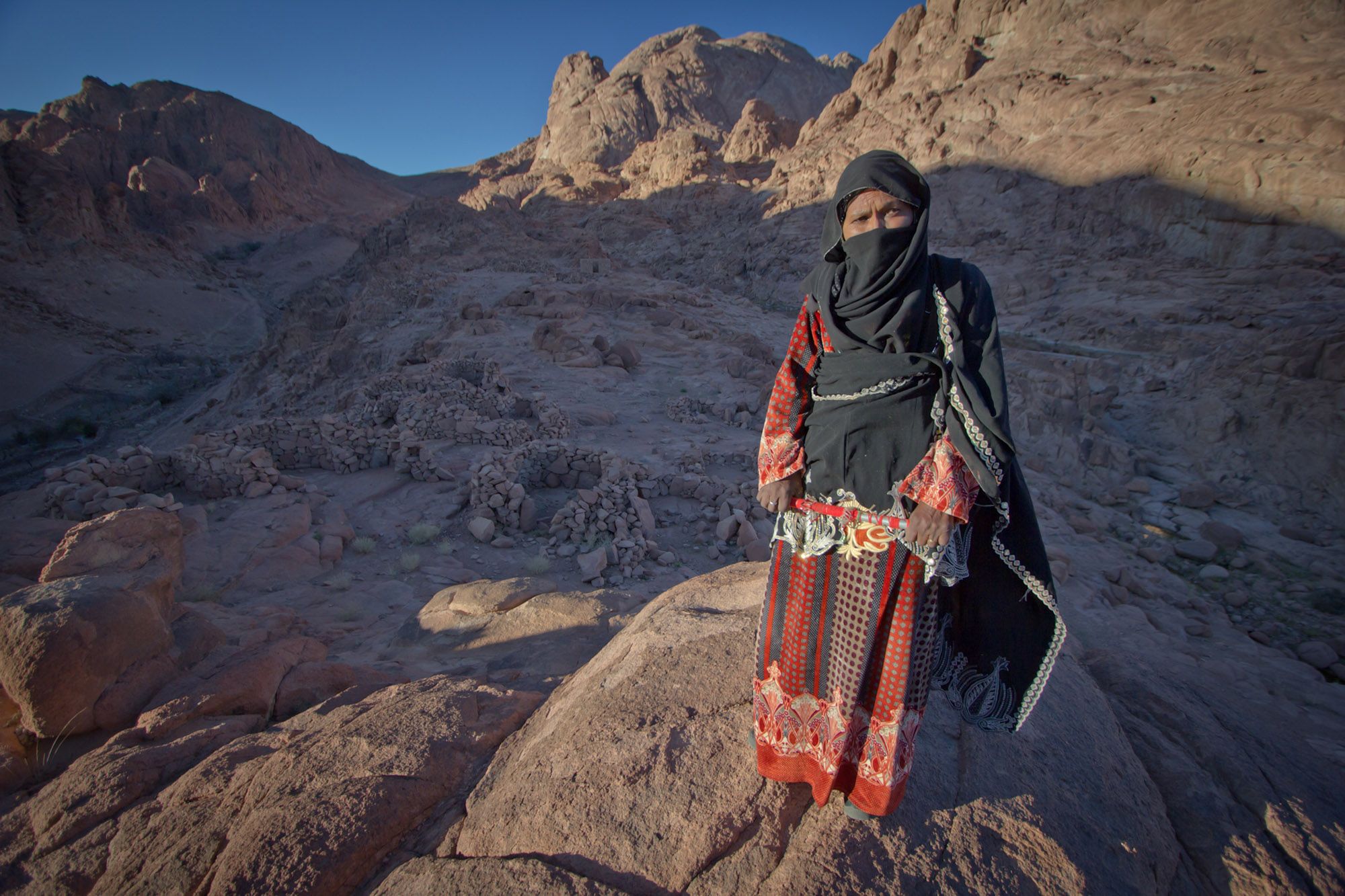 Musa describes the mountains as her doctor. She says they give her energy, and the plants in her garden sustain her and provide her with vitamins. 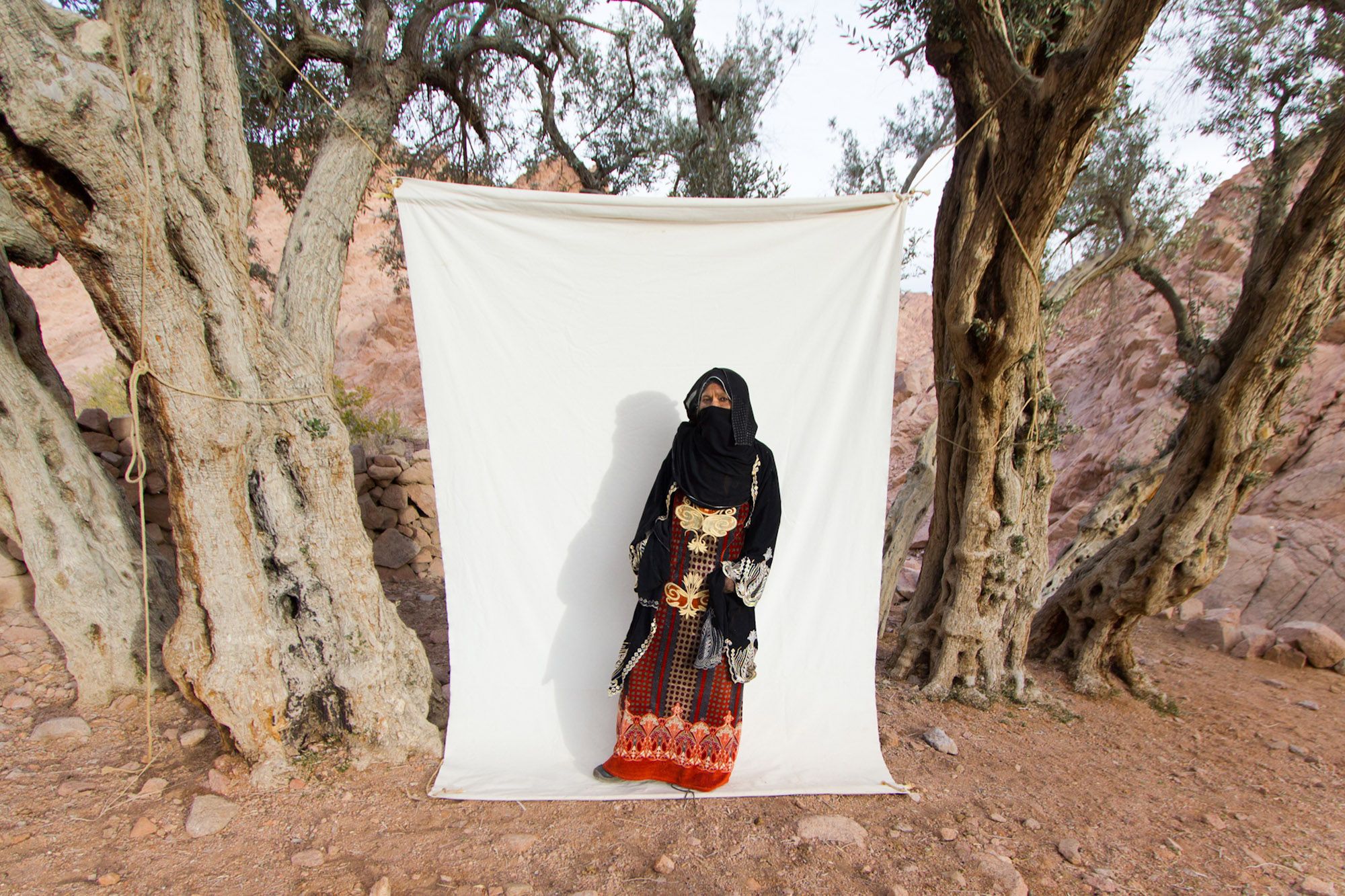 Musa pays as much attention to her attire as to her garden, wearing bright, embroidered and sequined abayas, a far cry from the black, full-length abayas most local women wear. 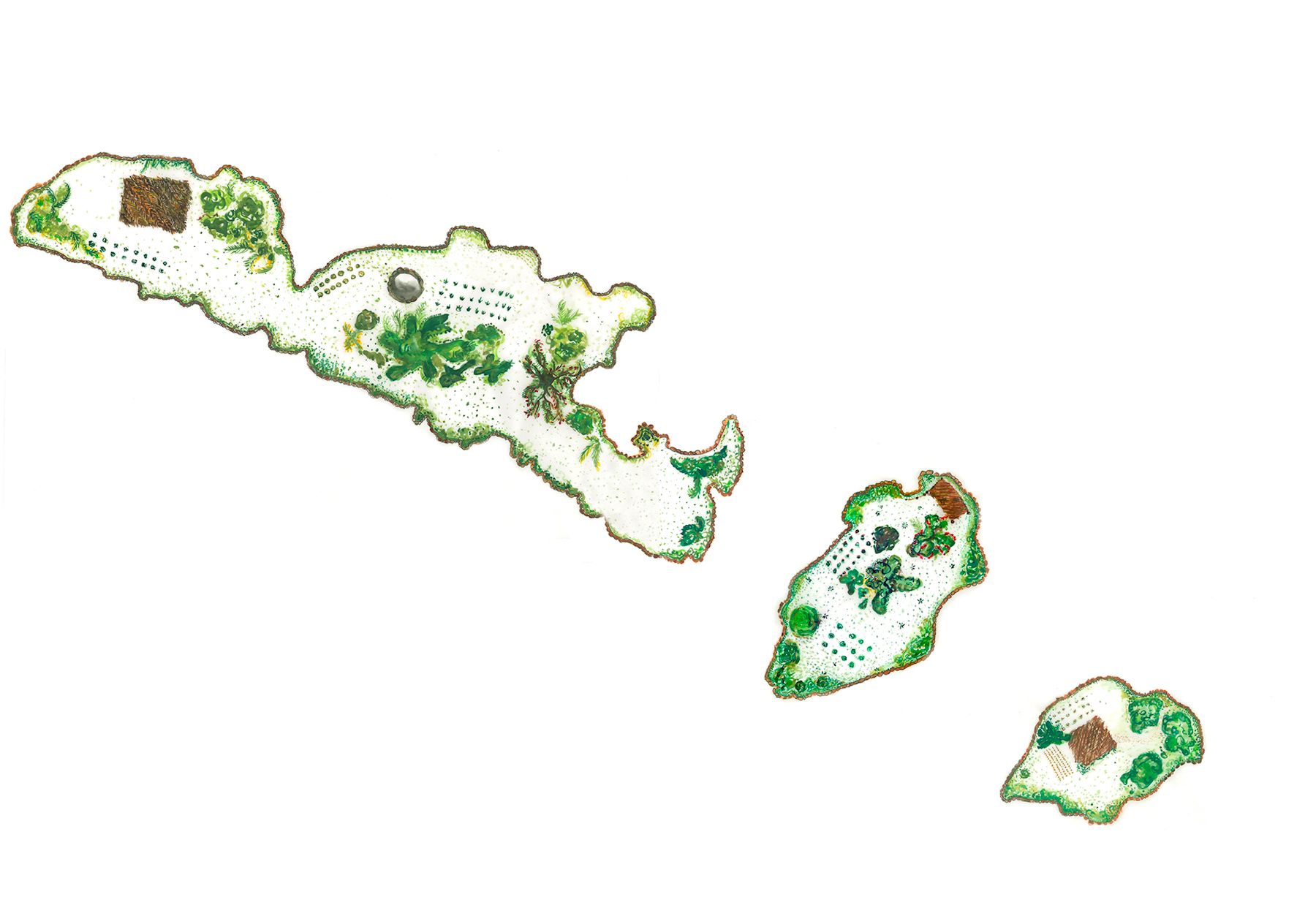 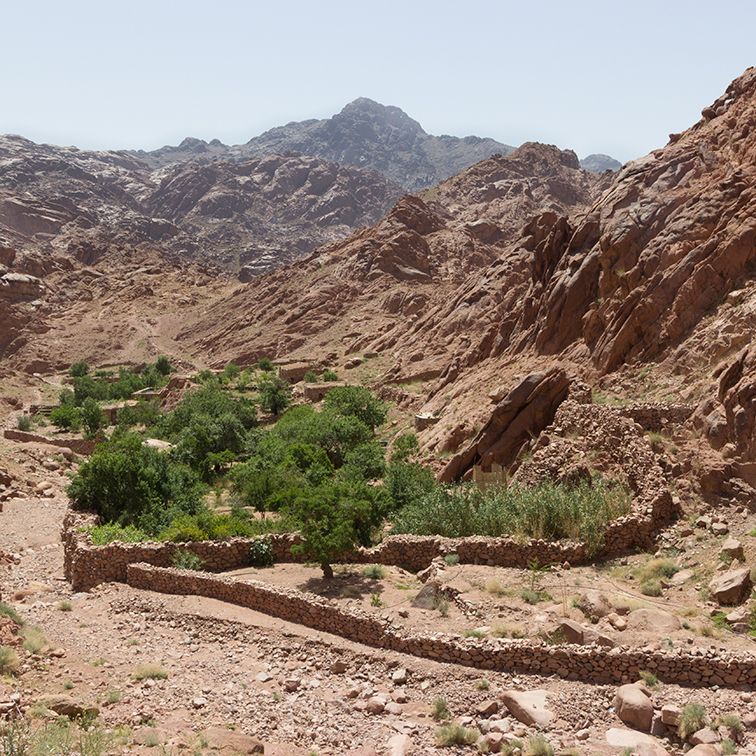 Saad Mohamed’s orchard in Wadi Zawatin, against a backdrop of Mount Katherine — the highest mountain in Egypt. 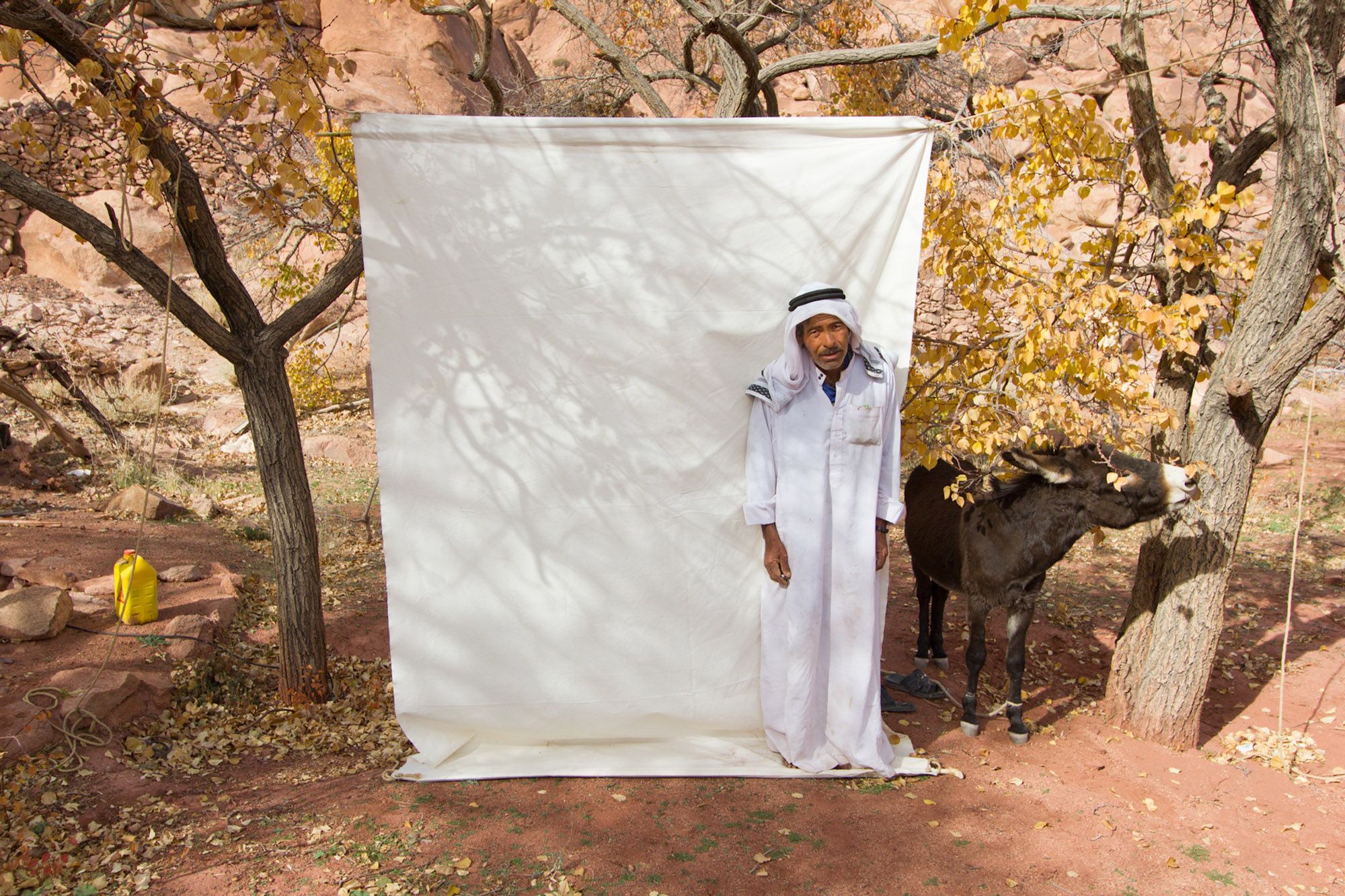 Every June, Farhan Mohamed leaves the village of St. Katherine for six months with his family and lives in their orchard — Abu Jedda. The orchard’s name originated from the deep red color of the soil, which is optimal for growing apricots and almonds. 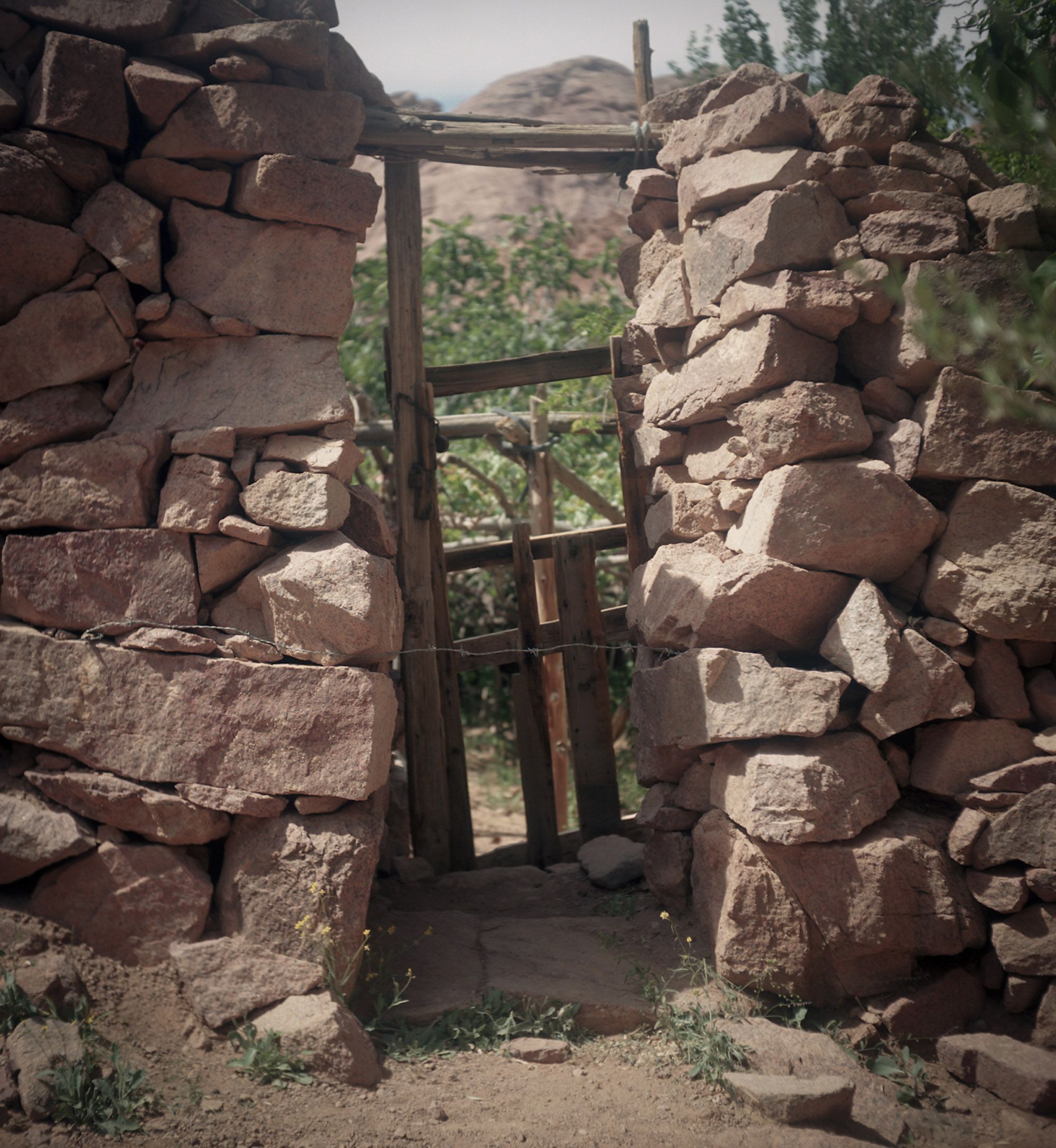 The entrance to Amariya Faraj Musa’s orchard in Wadi Zawatin. Some stone walls date back to the Byzantine period, when orchards were frequently built upon existing ruins. 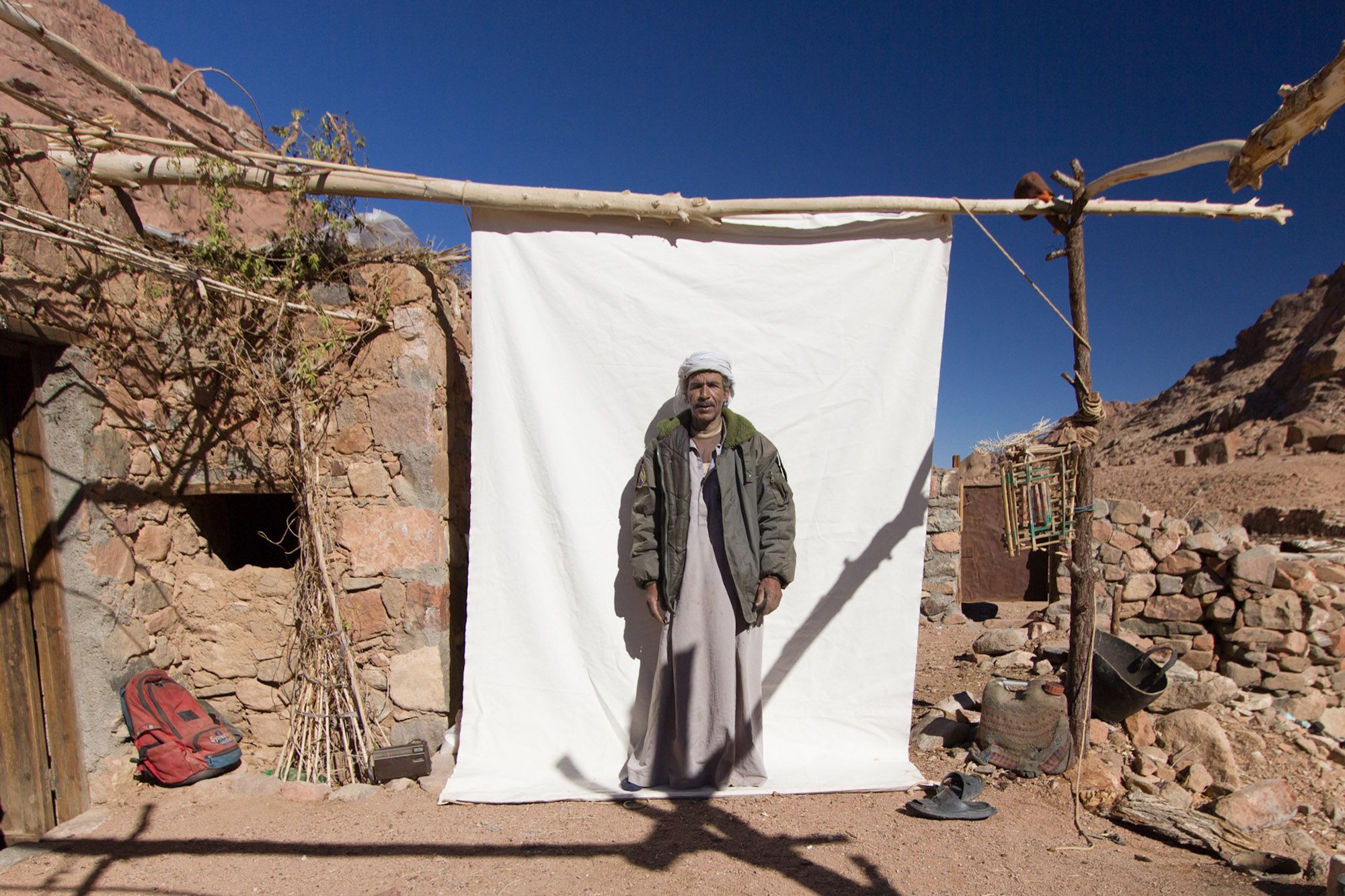 Salim Faraj spends the summer with his family in their orchard in Wadi Gibel. Influenced by nineteenth-century photographers who traveled the region with mobile studios, I began setting up a white canvas backdrop in the orchards. I wanted the artificial frame to hang in the middle of the natural setting to focus more attention on them. 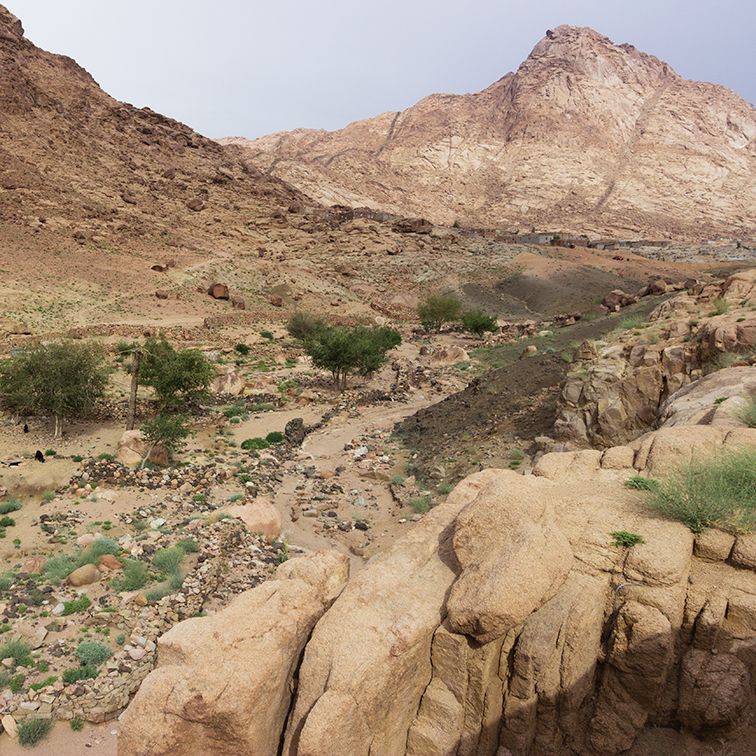 In the wadis there are many abandoned orchards. Sometimes an olive or apricot tree is tended in memory of the families who once used them, like this one in Abu Sela. 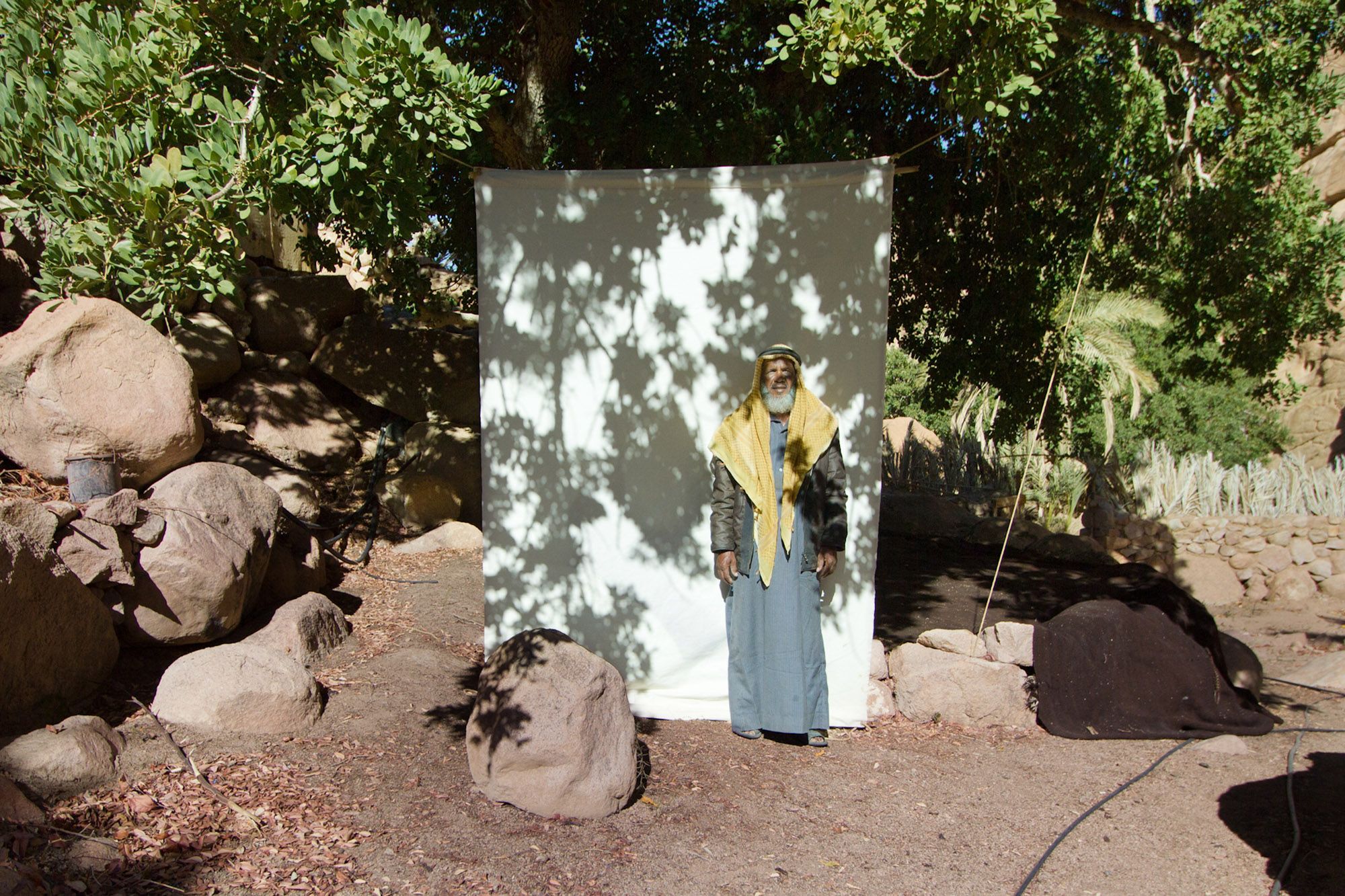 Dr. Ahmad Mansour, the last of nine herbal doctors in South Sinai. Mansour lives full time in his orchard in Wadi Itlah. His treatments and medicines come from his plants in the mountains, and his patients visit his clinic in the village on Fridays. 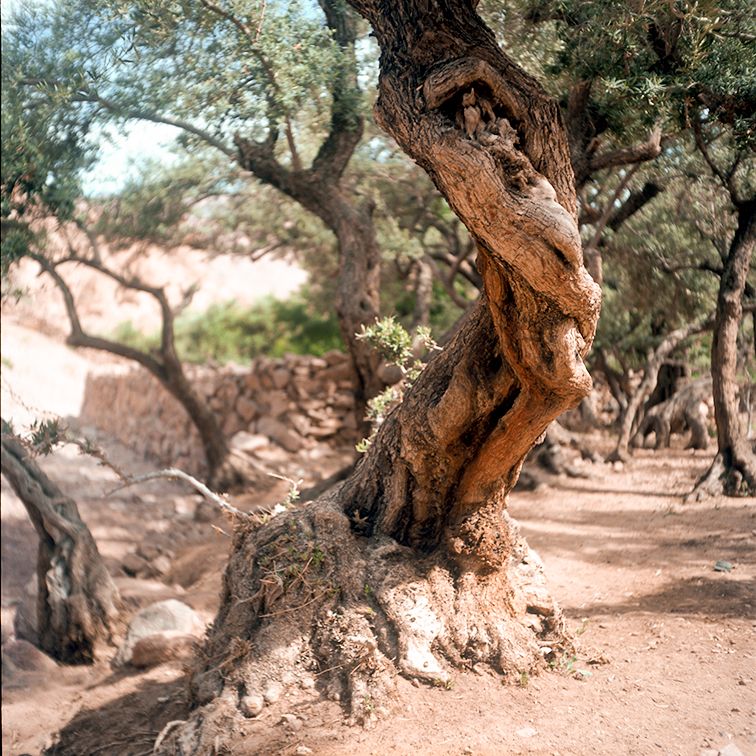 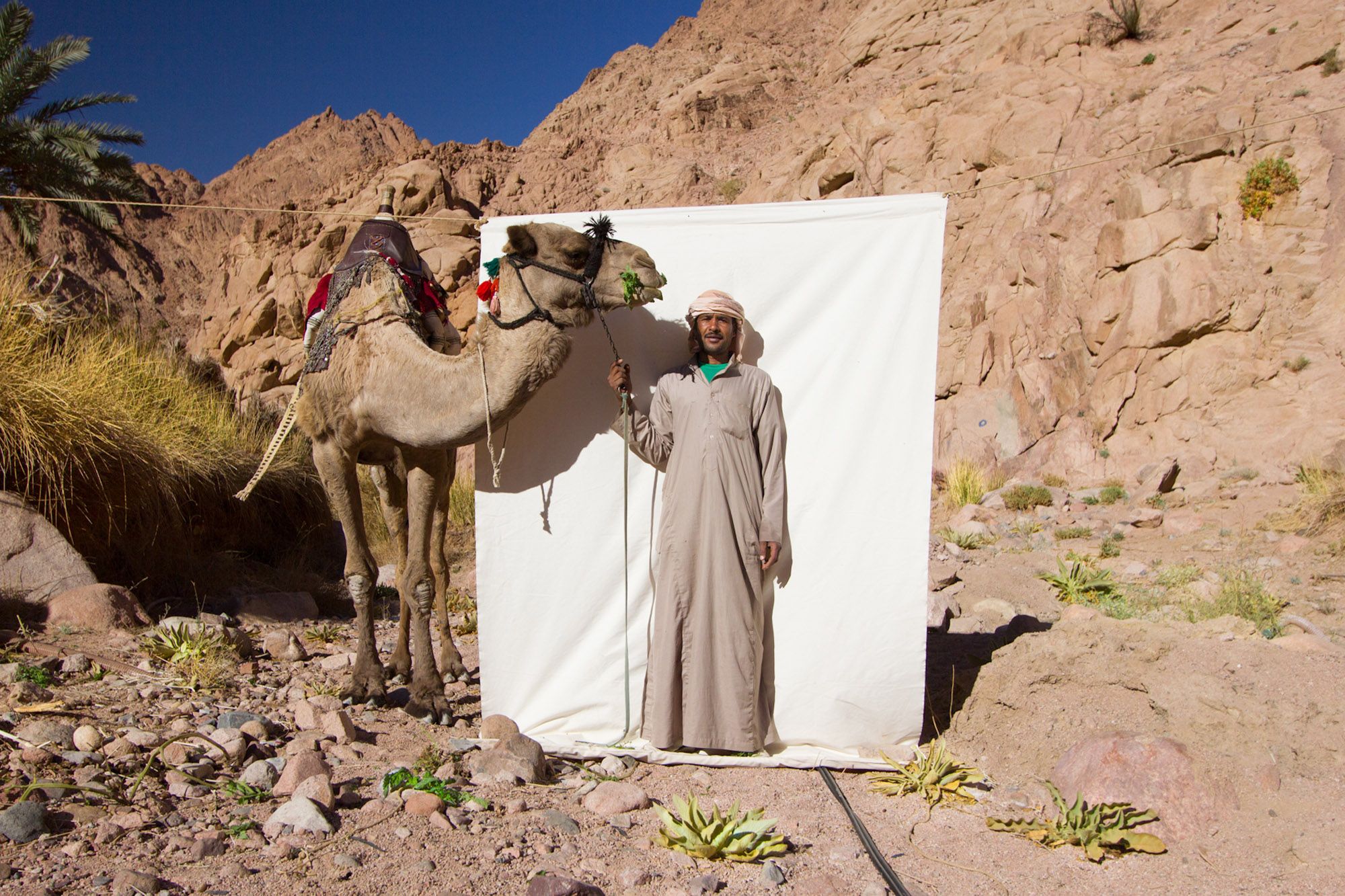 Nasser Mansour, the son of Dr. Ahmad, with his camel in Wadi Itlah. Camels and donkeys are the only means of transporting goods and equipment through the network of orchards. 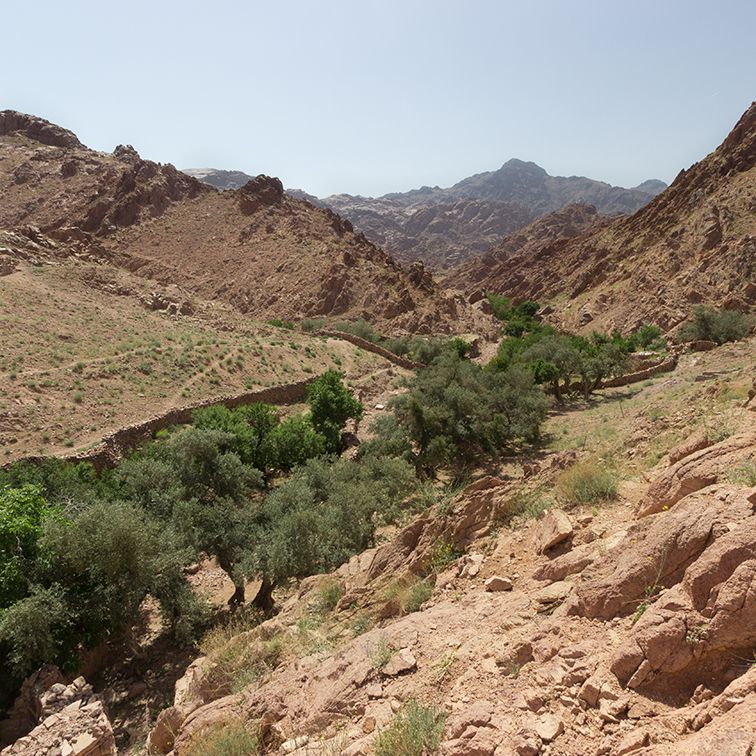 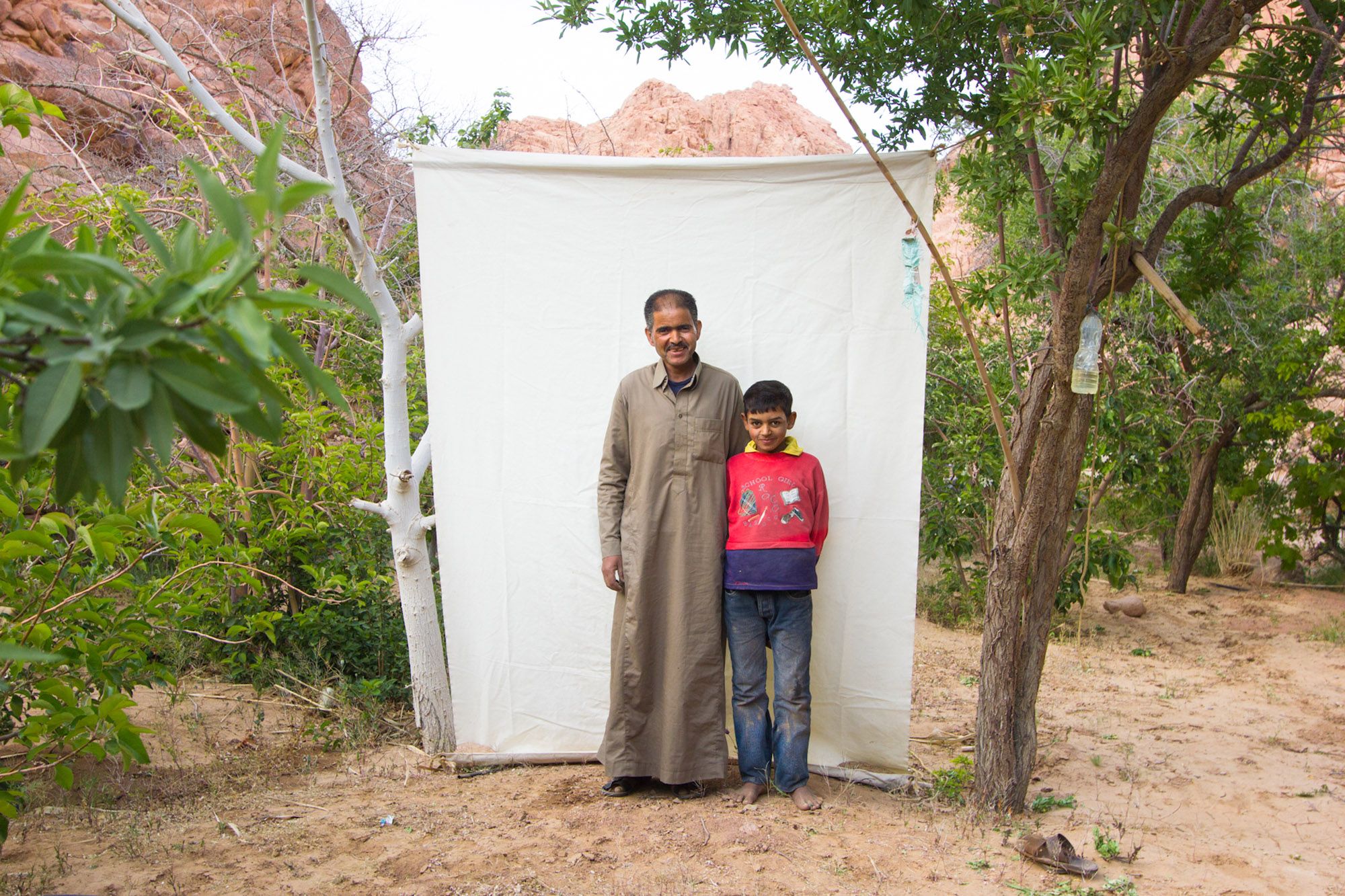 Saleh Darwish and his son, Wadi Shkya. I also envisaged these images as a response to nineteenth-century portraiture, the so-called “genre” photography, by allowing the natural setting of the gardens into the frame. Genre portraits of locals, whether taken in the fields against an improvised backdrop, or captured in a studio with props and costumes, severed subjects from the reality of their surroundings. Their contexts were reduced to captions: “dancing girl,” “bedouin,” “sheikh,” “water-carrier,” etc. 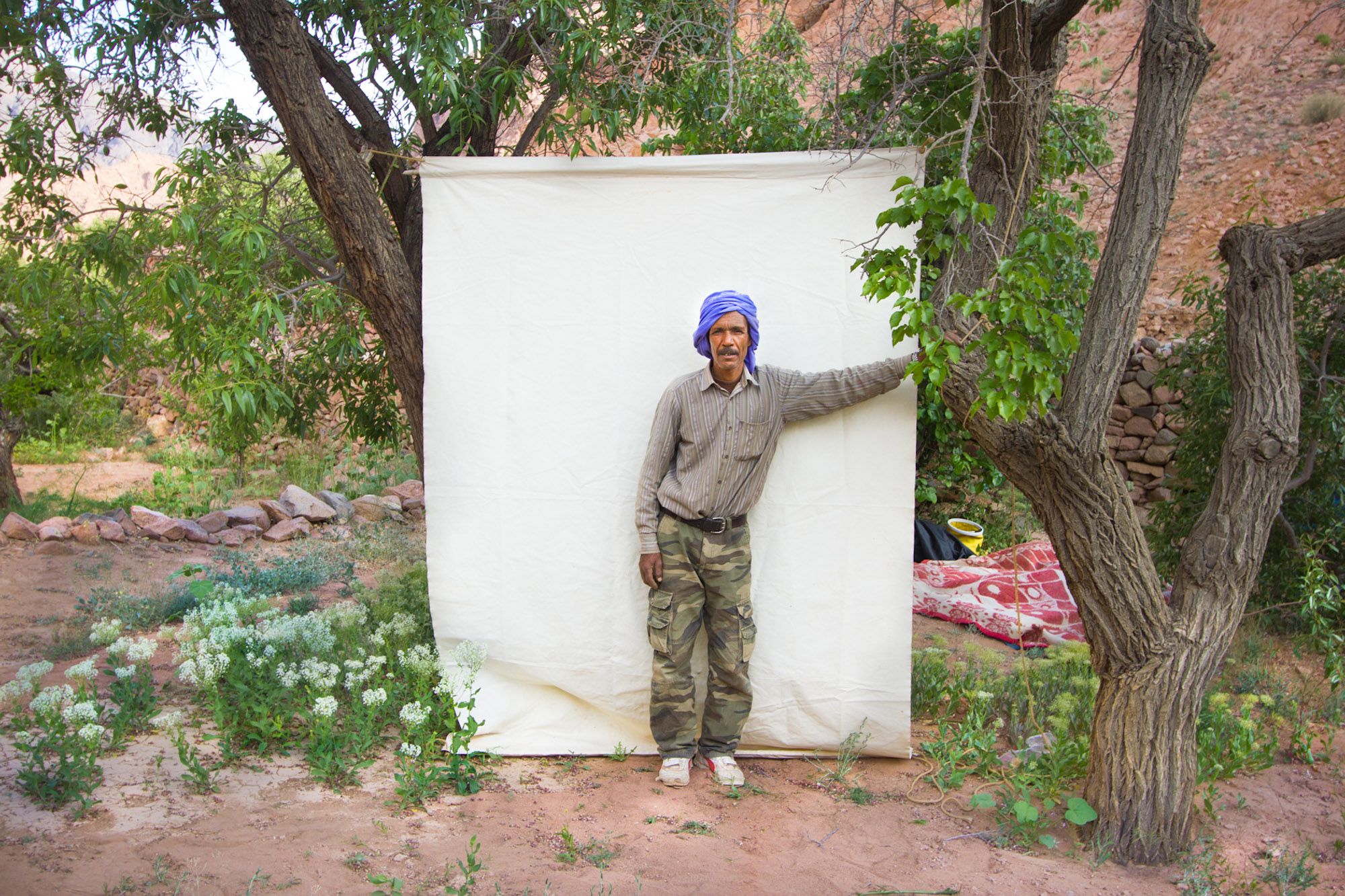 Hussein Musa in his orchard in Wadi Zawatin. In my portraits I wanted the white backdrop to serve the opposite purpose: to place the individuals standing before it into high relief, richly framed by the place that sustains them and that they nurture. This became my attempt to experiment with perceptions that blur the definitions between “natural” and “constructed,” and to toy with ethnographic photography and my role as foreigner, researcher and photographer. 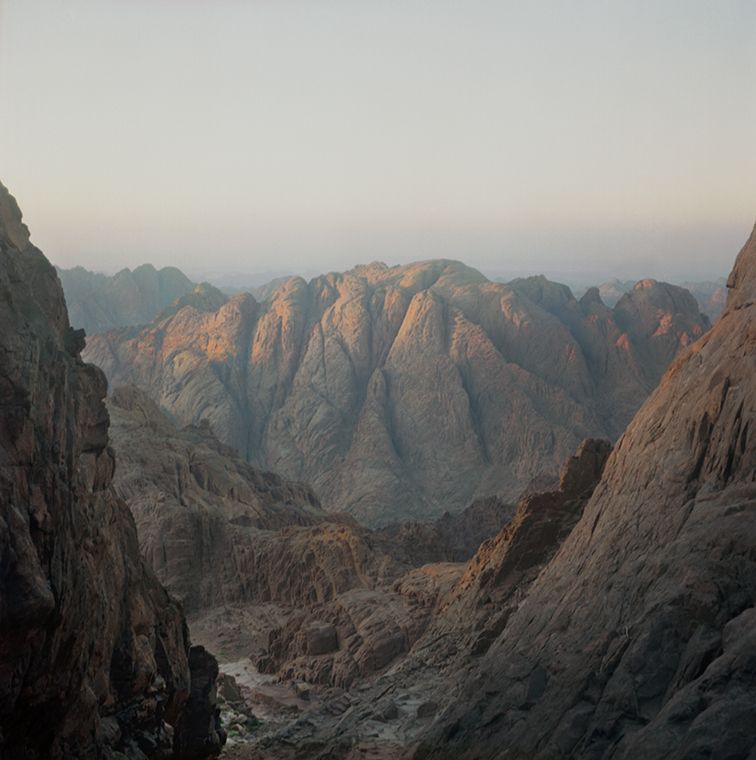 View over Mount Safsafa from Mount Sinai, the mountain where Moses is believed to have received the Ten Commandments. It is a popular day trip for nearby Sharm el- Sheikh holidaymakers 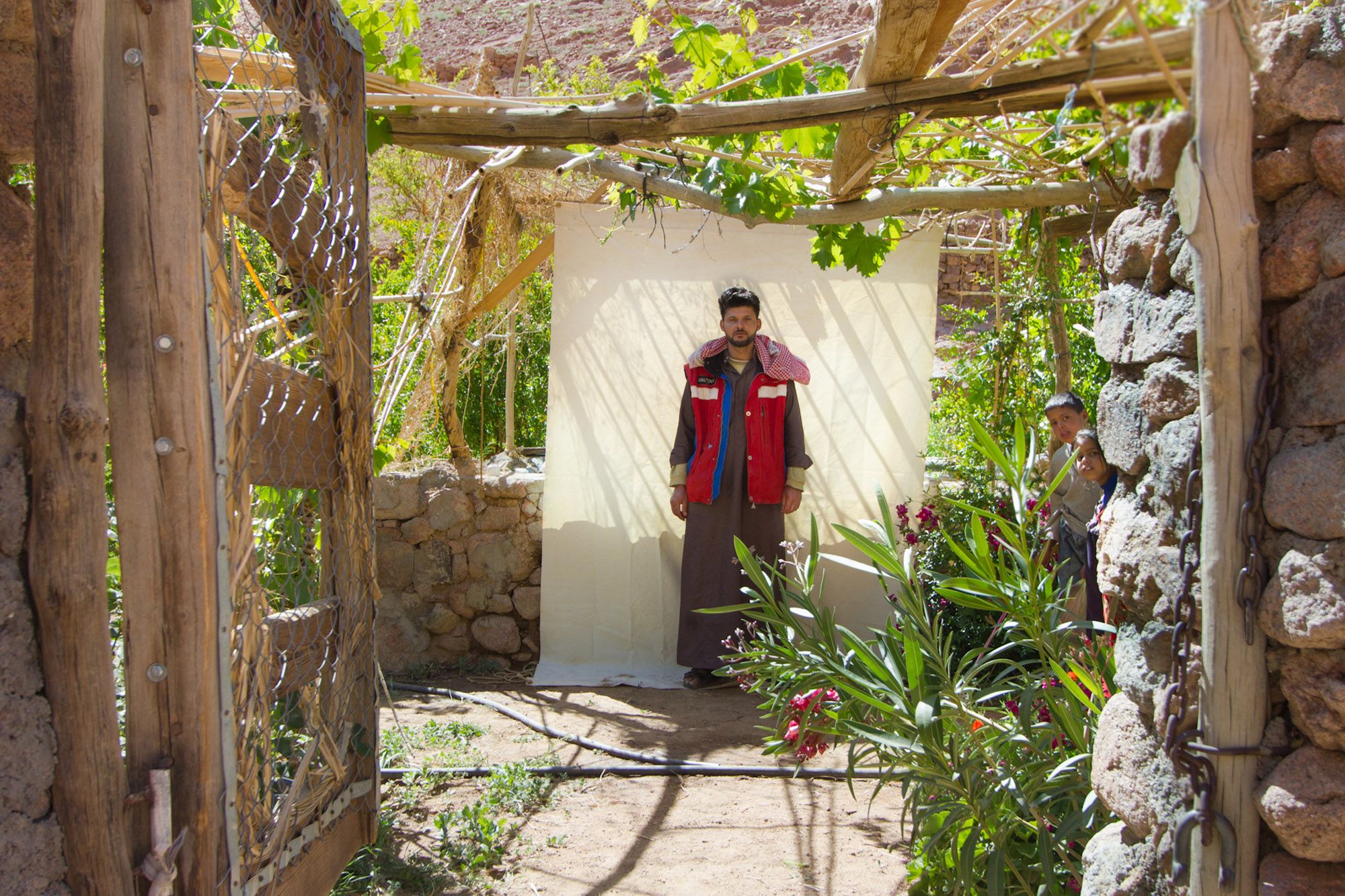 Rajab Sady and his children in his orchard in Wadi Sharegg. Sady’s orchard is close to the village, and he uses it daily, all year round, to supplement his family’s diet and to hang out. 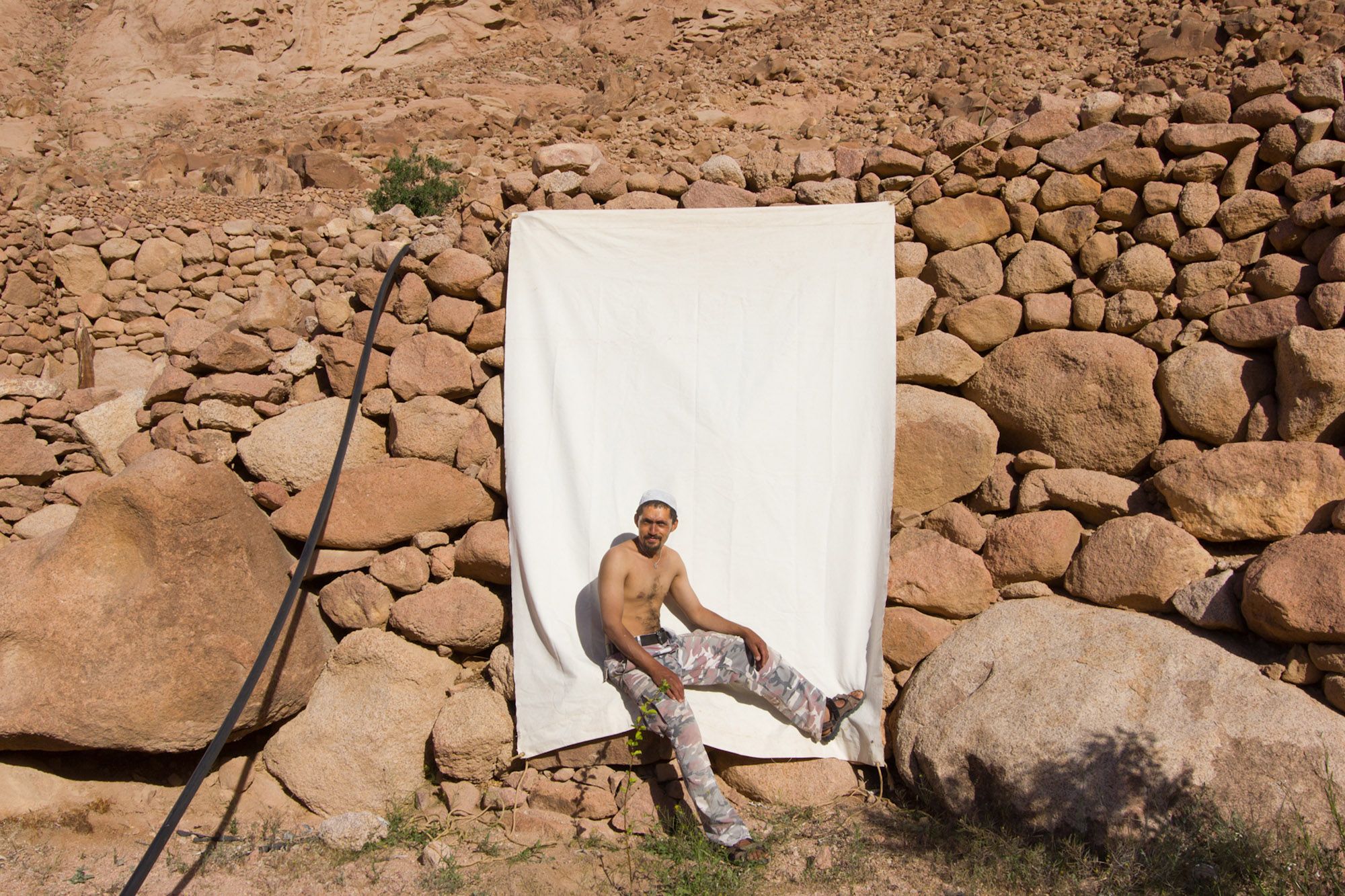 Salama Eid in his orchard in Wadi Sharegg. Eid and his two brothers recently restored his family’s orchard, which had been unused since his father passed away. They dug a 40-metre well. 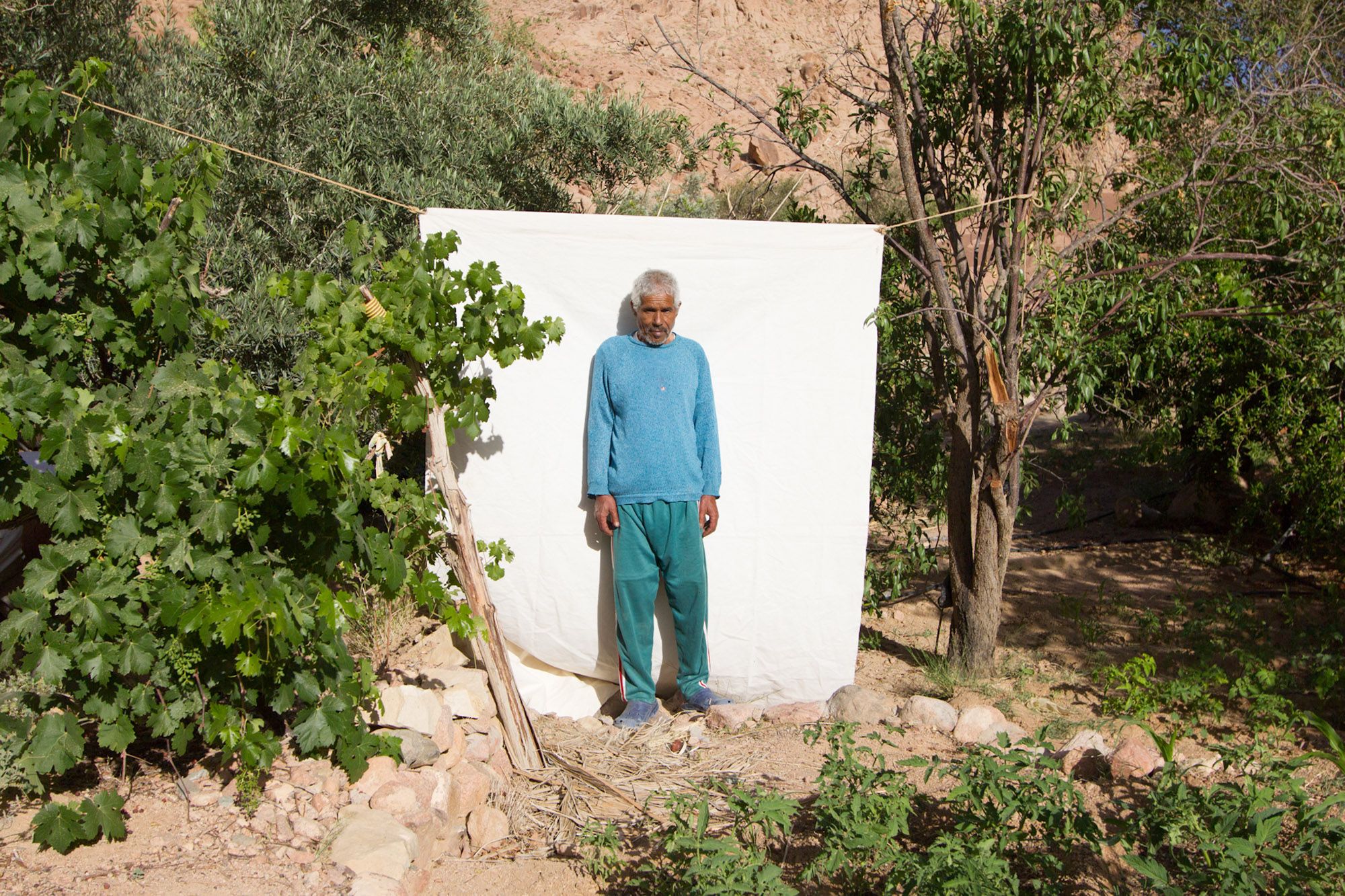 Hassan Musa in his orchard in Wadi Itlah. In the summer of 2013, Musa had to carefully place all his young pomegranate fruit still hanging on the tree in small cotton bags, in order to protect them from worms as they grew. 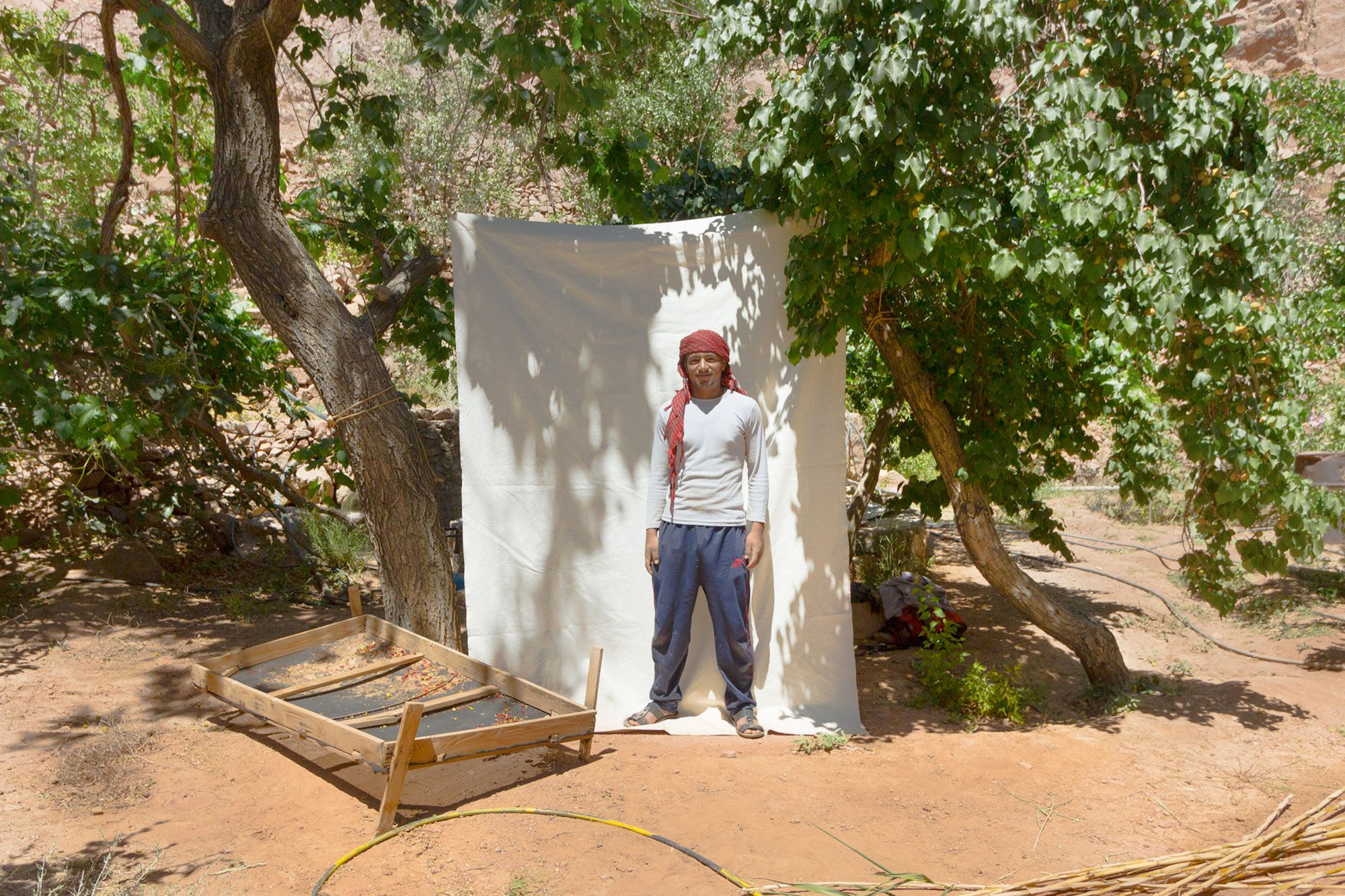 Hosny Faraj in his orchard in Wadi Assolbat. 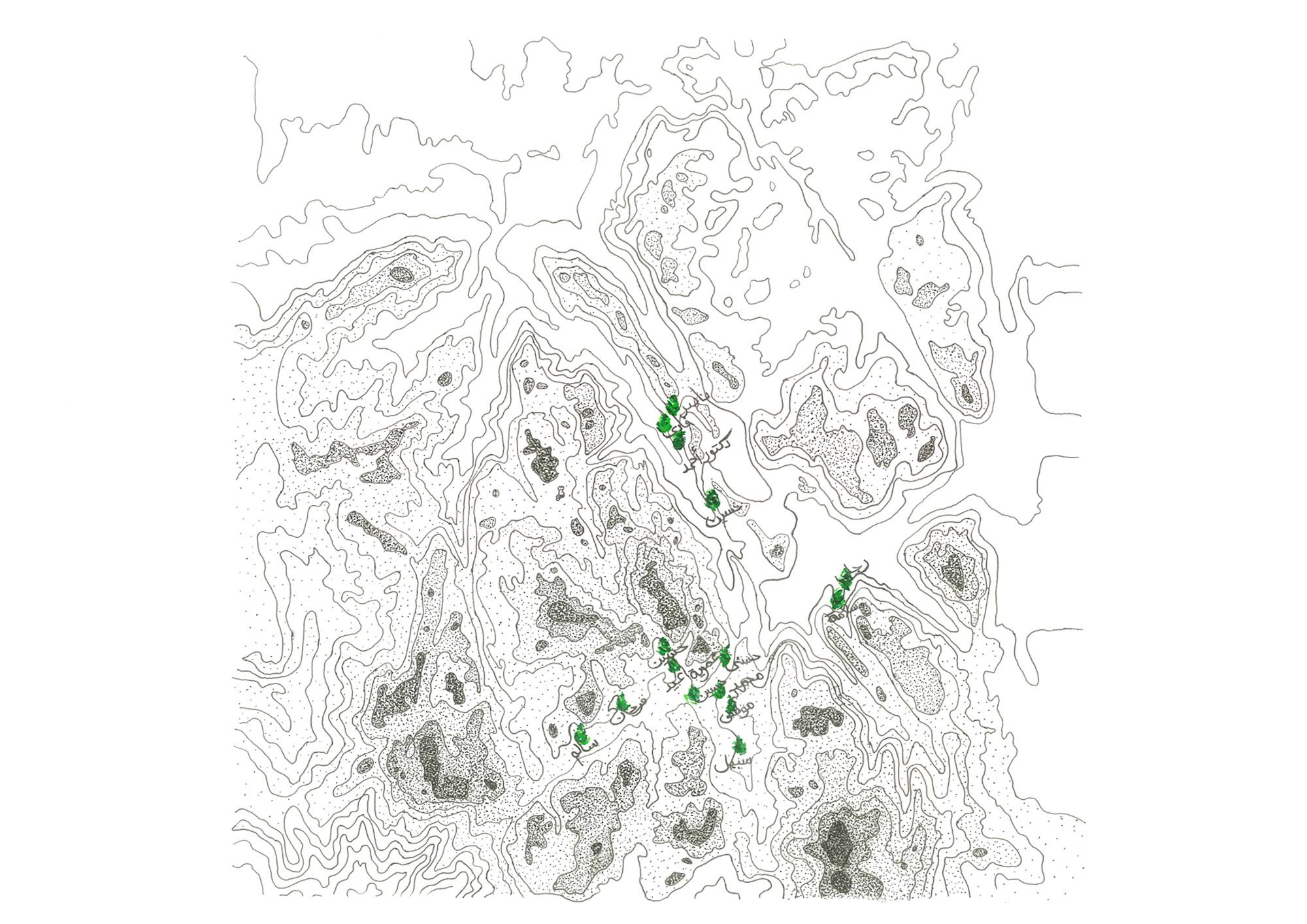 Mountain region of St. Katherine, with the orchards that were photographed marked. Drawing: pen and ink. 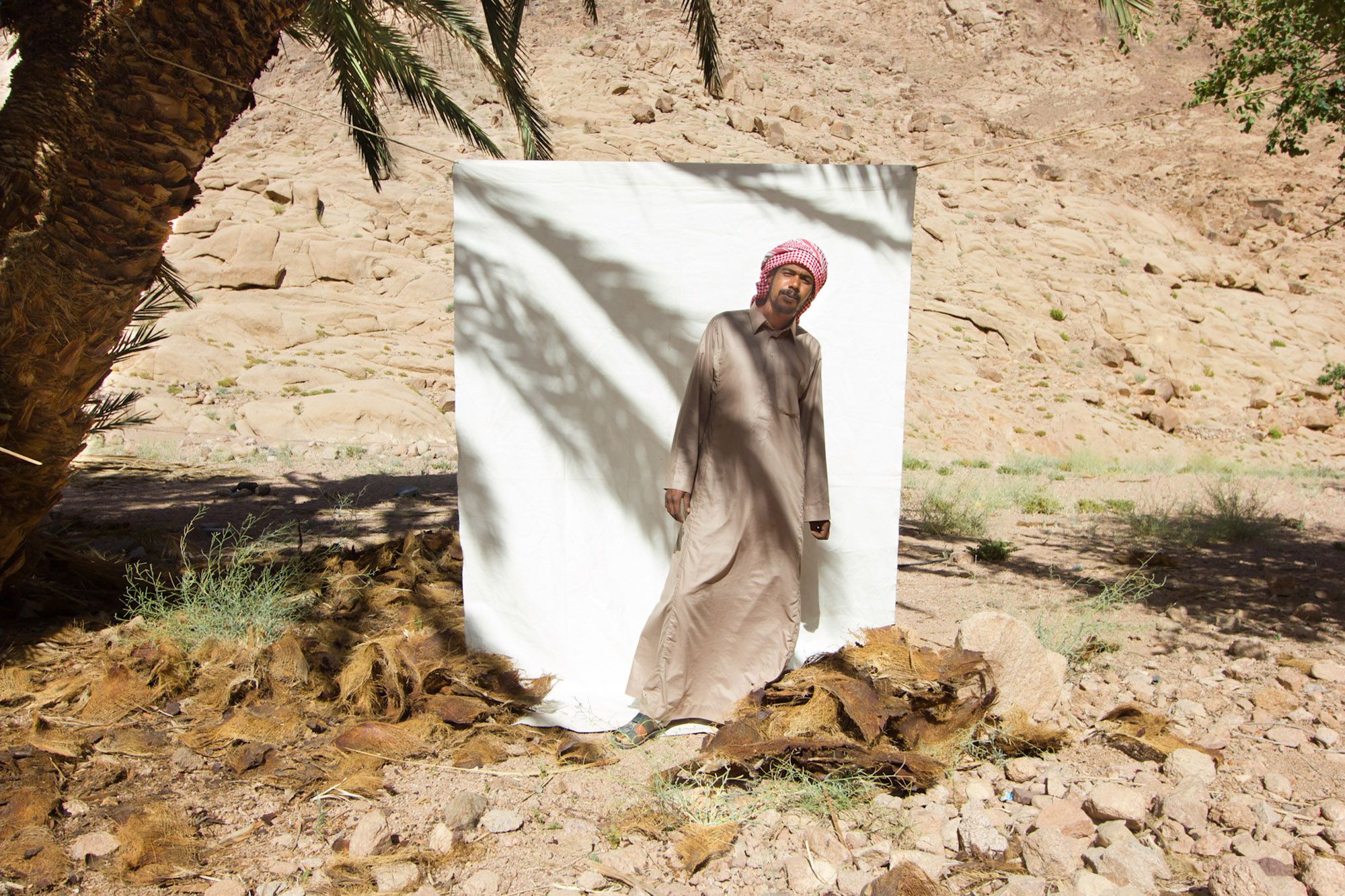