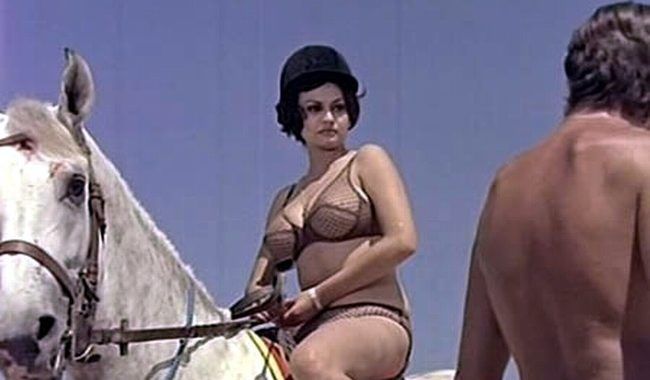 The Lady of the Black Moons, 1971
By
Amany Ali Shawky

“Who knows when the war is going to end?” says handsome gay painter Raouf to Ahmed, a youth fresh from Sharqiya.

Something’s hiding behind this innocent sentence: Raouf (Youssef Shaaban) sees a quick fling in the naïve villager (Mohamed al-Araby), and thinks that, by mentioning the war and the state of stagnant despair, he might convince him to be his lover.

Hamman el-Malatily (Al-Malatily Bathhouse, or An Egyptian Tragedy, 1973), directed and produced by Salah Abu Seif, is a perfect example of an Egyptian B-movie, the kind that found its way to cinemas during Egypt’s war with Israel.

The tough economic, social and political conditions of the country at that time took its toll on every aspect of Egyptian life, including the movie business, which prompted a new kind of cinema: low-budget, poorly executed, exotic, exciting, almost pornographic flicks mostly produced abroad — mostly in Lebanon.

Youssef says Youssef Chahine was the first Egyptian filmmaker to go to Lebanon — he made Biyaa al-Khawatim (The Ring Salesman, 1965), starring Lebanese pop star Fairouz, a collaboration not many movie fans know about.

In Zei’ab la Ta’akol al-la’am (Wolves Don’t Eat Meat, or The Kuwait Connection, 1973), for example, which is directed, written and produced by Lebanese director Samir Khouri but has an Egyptian cast and dialect, a one-dimensional love story is paired with an intense chase, as protagonist Anwar is an fugitive hitman.

In the first 20 minutes, we witness a murder, a fairly well-executed car chase in the empty streets of Kuwait, an eerie candlelit ritual and a nude scene, compensating for the general lack of dialogue. This unusual beginning is pleasantly surprising, especially because the camera movements and angles are unconventional: Footage shot from under a moving car during the chase is complemented by super high angles during a weird party.

A love scene between Anwar (Ezzat al-Alaily) and Maya (Nahed Sherif) is shot through a window on a rainy night. A second love scene is matched with black-and-white conflict imagery. These rather superimposed clips and still images condemn war worldwide, starting with the massacre of Palestinians at Deir Yassin and moving on to dead naked children in Vietnam. Shaky, quirky camera movements and extreme close-ups continue to push the boundaries of the expected. 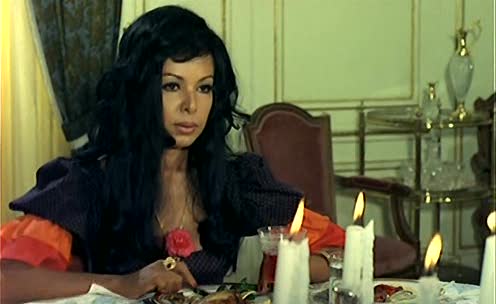 Sayedat al-Aqmar al-Sawdaa (The Lady of the Black Moons, 1971), also directed, written and produced by Khouri, is an almost two-hour drama with a lackluster screenplay and depthless love story that centers around a young woman, Aida, who is driven by love and lust. It’s been described as sexploitation, a 1960s genre of independently produced films serving largely as vehicles for non-explicit sexual situations and nudity.

Shot in Lebanon, the film’s cast is mostly Egyptian, including Hussein Fahmy (who a year later starred in celebrated Egyptian blockbuster Khali Balak men Zouzou [Take Care of Zouzou]), Adel Adham and Nahed Yousry, who starred in a few movies in the 1970s before disappearing.

Despite clearly lacking in craft, both of Khouri’s movies experiment with photography, music (especially rock and disco), and montage. A minor political message is present in both: Just as Anwar makes reference to the wartime atrocities around the world in Wolves Don’t Eat Meat, in the Lady of the Black Moons, Sadek (Philippe Akiki) makes a quick, forced reference to the damage wrought by the nuclear bomb. It’s a very literal take on the 1960s “make love not war” slogan. 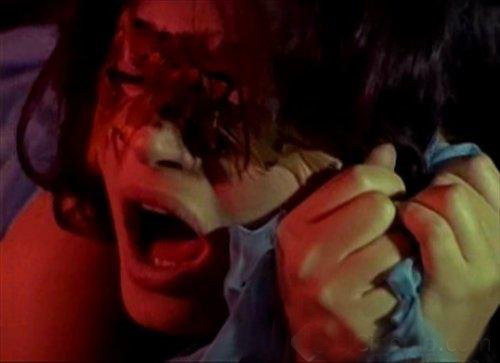 Galal al-Sharqawy’s Aazam Tefl fil Allam (The World’s Greatest Baby, 1972), stars two of the main pillars of Egyptian cinema, Roshdy Abaza and Hend Rostom, as an Egyptian professor working in Lebanon and his TV presenter wife. They receive an unexpected visit from Matilda (Mervat Amin), a Swiss woman who persuades the husband to collaborate with her in producing the greatest child by combining her unmatched beauty with his intelligence.

Although much less daring in terms of nudity and sex, it too revolves around seduction, in particular a lustful woman, rather than a strong plot. It avoids delving into politics — unlike Al-Malatily Bathhouse, which seems to try and paint a picture of Egyptian society during the war through the eyes of a young villager who comes seeking work in Cairo from his hometown of Ismailia, which is occupied by the Israeli army, yet chooses a different path. The film hinges on prostitution, and touches on corruption.

Its overall story arc of naïve villager coming to the big city, slipping into sin, then repenting, echoes the masterpiece Abu Seif made 15 years earlier, The Youth of a Woman (1956). It is infamous for its love scenes between Ahmed and Naema (Shams al-Baroudi). 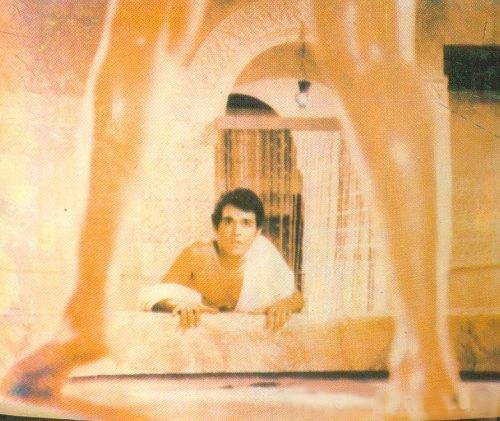 In the 1930s, during the great depression, American studios resorted to cheap productions and shocking topics to regain a significantly decreasing audience — prostitution, violence and homosexuality were frequent in such movies. Due to legal restraints, this wave fizzled out, but returned in the 1960s as censorship loosened.

Perhaps this same wave hit the shores of Egyptian cinema during the six years of war, with its severe economic and social traumas, as filmmakers, actors and producers tried to regain diminishing audiences through shock tactics, while living through an era tainted by the nihilism brought about by war.

One distinctive aspect of these war productions is reference to romance between same-gender characters: Almost every character in these four movies experiment, on some level or another, with homosexuality. Maya makes out with her paralyzed sister-in-law, Aida exchanges a quick kiss with Victoria (the brothel’s madam), and Ahmed joins the gay painter in a topless dance.

Perhaps this was the influence of American cinema and the wave of movies made for the LGBT community in the States following the Stonewall riots in 1969. In these B-movies, such topics are presented as being relatively normative, unlike in previous Egyptian productions.

Rather than saying anything about pan-Arabism, these films arguably adopt a more American approach, and their contrived political messages largely revolve around the universal make-love-not-war vibe.

Youssef, who’s now based in Spain, describes this wartime B-movie phase as a market, not a movement. He says it successfully attacked filmmaking norms and opened new horizons of freedom.

“It also broke the rather false conviction that other cinematic scenes, aside from Egypt’s, are marginal and weak,” he adds.

After the 1967 Naksa, there were two main trends in movies, either the crowd-pleasing Fouad al-Mohandes and Chwikar comedies, or a type of non-commercial production that failed to connect with audiences.

“Those who didn’t find themselves in those two main groups went to Lebanon, where a more liberal type of cinema was being produced — breaking many norms in the process,” says Youssef.

This short-lived phase likely influenced many commercial productions of the 1970s, such as movies starring Mahmoud Yassin and Hussein Fahmy with liberal storylines and actresses in bikinis, but they were much more restrained.

Khouri did only two productions and disappeared from movie making. Abu Seif, often described as the father of realism, continued making movies until the 1990s. As for Galal al-Sharqawy, he started out by directing Armala Wa Thalath Banat (A Widow and Three Girls, 1965), an adaptation of a French play. He later went into theater proper and directed several plays, the most famous of which was Madraset al-Moshaghebeen (The School of Bullies). He has a theater named after him in downtown Cairo.

These B-movies were replaced in the 1980s with another kind of low-budget production, known as “aflam moqawalat” (entrepreneurs’ movies) that mostly depended on new-ish video technology. The 1990s witnessed so-called “cinema nazeefa” (clean cinema), which made low-budget, low-quality productions quite scarce. However, the  last few years may have witnessed a comeback in the form of “aflam maharaganat” (films making use of street-style mahraganat music), mostly produced by the infamous El-Sobky Film Productions.

The end of the B-movie burst came with the end of the war with Israel, the beginning of the Lebanese civil war, and the appearance of video.

“Had the Lebanese war not started, this phase might have been prolonged or even became a movement,” says Youssef. “Who knows. Lebanese cinema could have been a competitor to Egyptian cinema through a new style named ‘touristic cinema’.”

The third-to-last paragraph of this article has been edited for clarity.

AD
You Might Have Missed
Carbon Colonies & A Green New Deal
Where do old lesbians go to die?
Mugamma revisited: Reimagining the building and the square
What we talk about when we talk about trees
AD
Amany Ali Shawky
89 articles on Mada

Topics
Related
Cimatheque
Letting viewers see ‘unconventional’ films: Q&A on the AFAC Film Week
Sama Waly | The most pressing problem the region’s filmmakers face today is arguably the absence of good distribution
censorship
Legally or illegally? How to make a film in Egypt
Aida Elkashef | Many Egyptian filmmakers end up choosing to make films in secret, far from the eyes of the state, except
Egypt's cinematic gems
Egypt’s cinematic gems: A Woman’s Youth
Hessen Hossam | This is not just a simple story of a sexy older woman seducing a college boy and finding excuses to belly-dance
cinema
Egypt’s cinematic gems: Something of a Torture
Ismail Fayed | Two hours of high-octane drama about an arty love triangle