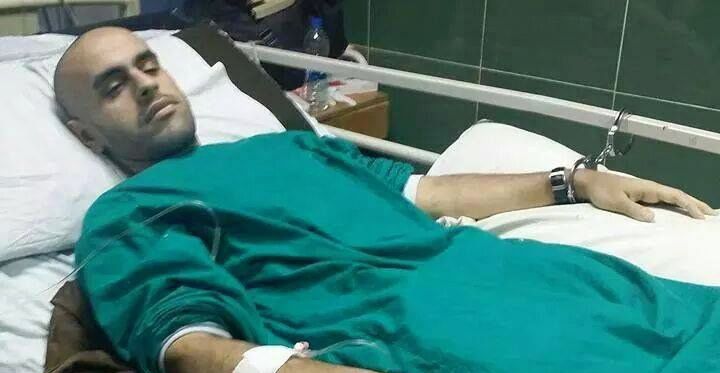 After approximately two years of solitary confinement and 490 days on hunger strike, political prisoner Mohamed Soltan was released from prison on Saturday and deported to the US after giving up his Egyptian citizenship.

He left Cairo on an EgyptAir plane at 9 am on Saturday for Frankfurt airport, accompanied by a medical team, privately owned Al-Masry Al-Youm newspaper reported.

Soltan’s sister Hanan told the BBC that he was released according to the foreigners deportation law, issued by President Abdel Fattah al-Sisi in November, which grants the president the authority to deport foreign prisoners at any stage of prosecution and with the approval of the general prosecution and the cabinet, following a request from the US government.

General Prosecutor Hesham Barakat told the state-owned Middle East News Agency (MENA) that Soltan’s deportation was to “continue serving the life sentence he received in the Rabea operation room case in the US.”

Soltan, who was a dual citizen, was forced to give up his Egyptian citizenship to qualify for deportation under the law.

A statement issued by Soltan’s family on Saturday morning said they were “incredibly happy to confirm that Mohamed is on his way home after nearly two years in captivity.”

“Extensive efforts from the US government have successfully secured Mohamed’s deportation back home to the US, mercifully concluding this dark chapter for Mohamed and our family,” it added.

The statement, which was first published on Hanan Soltan’s Facebook page, says the family feels “forever indebted to the countless individuals who have been working tirelessly behind the scenes to secure his release, the vast majority of whom have never even met Mohamed. To witness you all — regardless of race, religion, political affiliation, gender, age — come together during this time has been greatly illustrative of the power of the human spirit and we are in awe of each and every one of you.”

They also mentioned the “many nameless individuals in this world who continue to wrongly languish in captivity,” encouraging those who supported Soltan to “champion their causes, as you have so graciously done for Mohamed, and pray that they and their families one day feel the same relief that we feel today.”

The family said that the focus will be on providing Soltan with medical treatment once he arrives in the US, as “spending several hundred days on hunger strike” has left him in “a dire health condition.”

Soltan has been on hunger strike since January 2014 in protest over his detention, which has greatly impacted his health. In response to pleas from his family, he switched to a partial strike on January 20.

Activists expressed their happiness to hear the news of Soltan’s release, including prominent activist Mona Seif, who said the joy was only tainted by the authorities’ refusal to “allow Soltan to say goodbye to his father,” who is also in prison awaiting the execution of the death sentence he received in the “Rabea operation room” case.

“A while ago [the authorities] realized that separating [Soltan] from his father is how they can inflict the harshest pain on the young man who broke them with his strong will,” Seif added.

Soltan and his father were convicted of involvement in an operations room to instruct Brotherhood members on how to confront security forces after the deadly dispersals of the pro-Morsi Rabea al-Adaweya and Nahda Square sit-ins in August 2013. Soltan was sentenced to life in prison, along with 36 others by Judge Mohamed Nagy Shehata on April 11.

According to his family, Soltan, who is the son of prominent Muslim Brotherhood leader Mohamed Salah Soltan, but not a Brotherhood member, returned to Egypt from the United States to care for his sick mother.

He was arrested on August 25, 2013, along with several friends when police raided his home looking for his father.

Mohamed Salah Soltan and 13 others, including the Muslim Brotherhood Supreme Guide Mohamed Badie, were sentenced to death on March 16, by Judge Shehata, who has become notorious for handing out harsh sentences in political cases.