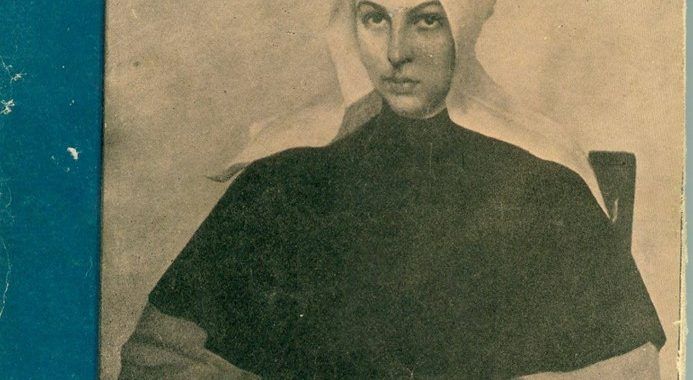 Over the past decade, ample calls have been made to create a system for the authentication of works by Egyptian modernist artists and establish international museum practices within our state institutions, which own and manage the lion’s share of our modern art heritage. So far, they have been left unanswered.

Recent disputes over art fraud and accusations of negligence have reignited these urgent debates in the state and private sector. But such ambitious tasks will require the good will and expertise of a multitude of parties, including the Culture Ministry, the Higher Education Ministry, the Finance Ministry, the legal system, private dealers, late artists’ families and the deep pockets of wealthy art patrons.

Fraud and negligence are certainly no strangers to the US$54bn global art market, but in many countries fundamental measures are set in place to protect the value of art, artists and buyers. Some of these must be applied in Egypt in order to ensure accountability and re-establish confidence. The current situation, though grave, must be seen as an opportunity.

Here I will concentrate on sales of works by late artists either from their estates or the secondary market (or in simpler terms, the “used” or “second-hand” market). Tackling institutional practices requires a separate discussion.

Our current informal art market, devoid of structure or supervision, allows anyone to become an art dealer. Art attributed to late pioneer artists is sold any which way. Some heirs, unfamiliar with the concept of estate management, distribute a few paintings here and there. Unauthenticated works can be found in galleries, furniture shops, pop-up exhibitions and with con dealers who show up with “a never-seen-before painting discovered in the attic of the grandmother of a woman who lives in Garden City.” More alarming, previously undisputed fakes remain circulating in the market, having been recycled.

Since art-market prices have soared in Egypt and art has been defined as an alternative financial asset, the kind of people who buy art has evolved. While there are some seasoned collectors and institutions who take time for due diligence, an increasingly large segment of investors does not bother or know how to access genuine expertise. Many fall into the trap of believing they are outsmarting the market by buying a masterpiece at a fraction of the real value.

Only legally registered galleries and dealers, reputable auction houses, and artists’ estates should be the source of modern art acquisitions. In countries where the art market is more developed, artists’ heirs often charge reputable galleries or dealers with protecting and enhancing their late father’s or mother’s legacy — by managing authentication, exhibitions and sales. Family members may lack appropriate knowledge and understanding of how the art business works and find themselves faced with enormous challenges, such as the basics of storage, conservation and cataloguing. Qualified galleries can fill in that gap. And when the public is made aware that a certain organization is in charge of a late artist, with the consent of the heirs, there will be less room for wannabe dealers to maneuvre.

The challenge in the long term will be “orphan” artists, who have no known heirs (such as Ragheb Ayad, Fouad Kamel and Hussein Bicar) and “forgotten” artists (such as Emy Nemr, Kamal Khalifa, Ibrahim Massouda).

How to authenticate a work?

The sale of artworks must draw on three kinds of appraisal tools: provenance (historical sequence of ownership all the way back to the artist), professional expertise from those specializing in a certain artist or art movement, and scientific analysis.

To provide proof of provenance, we need to invest in research and the publication of catalogues raisonnés and monographs. The former consists of an exhaustive (encyclopedic) compilation of all the known works of a specific artist, while the latter tends to be a detailed study of the artist’s biography and essential works. Consulting such books will be a major step in a due diligence process for acquisitions or exhibitions.

Putting together comprehensive books is a massive, long and costly task. It requires meticulously gathering all surviving documentation, archival materials and historical records. While these are abundant, they are spread in bits and pieces across state institutions, fine arts schools, individuals (scholars, researchers, art historians, dealers, collectors) and the artist’s family. To access and analyze them is a herculean task that requires dedication, overcoming state bureaucracy and properly handling individual egos.

Currently, Hussam Rashwan and Valerie Didier Hess are leading the way by producing the first catalogue raisonné ever for an Egyptian modernist painter, Mahmoud Said (1897-1964). While the publication of the book (by Skira) is expected to create a few controversies, it will be the most thorough reference for any work of art Said produced and likely contain major surprises and discoveries for even seasoned Said collectors and scholars.

This exemplary project, which has been three years in the making, should be duplicated for Egypt’s most acquired and influential artists. As the heirs of most artists cannot cover the costs, galleries who manage their estates and art patrons must come forward and hire teams of researchers to accomplish the job. The Gazzar family, an Egyptian team specialized in Seif and Adham Wanly, and a French researcher specialized in Ramses Younan are following suit.

Stumbling on important works is one positive outcome of catalogue raisonnés. 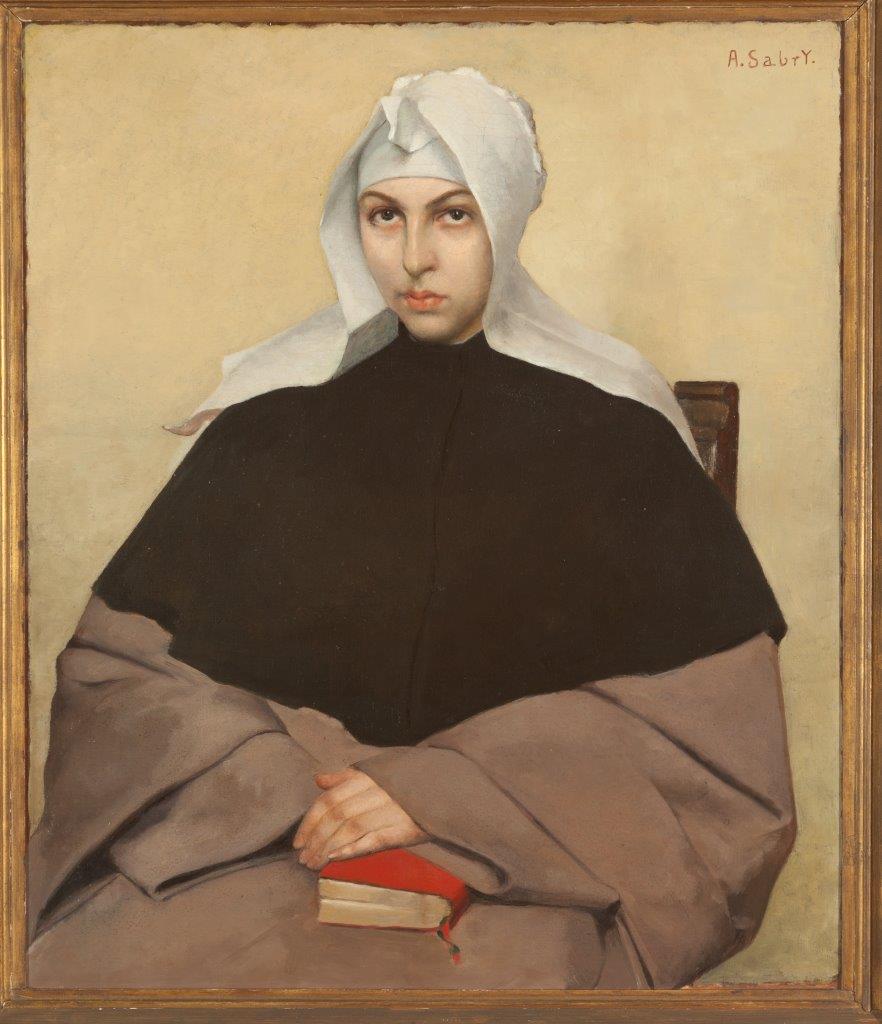 The Nun by Ahmed Sabry

For years, the family of modern portrait painter Ahmed Sabry (1889-1955) and the management of Cairo’s Egyptian Museum of Modern Art (EMMA) have been assuming the loss or theft of Sabry’s masterpiece The Nun (1929), or as originally titled, Meditations. Because of the archaic, if not absent, loan tracking system at the museum and the lack of communication between ministries, The Nun’s location was a mystery. It is now confirmed that Sabry’s painting hangs at the residence of the permanent representative of the Egyptian mission to the United States in New York. Ahmed Sabry with his wife and son Nezar. On the wall hangs The Nun, 1929.

Meanwhile, our fine arts museums should provide broader public access to their invaluable collections — most of which are in storage. Since publishing is cost-prohibitive, the alternative is to recreate a virtual museum online through a high-quality website, possibly in collaboration with Google’s Art Project – Cultural Institute. The Sharjah-based Barjeel Art Foundation, Doha’s Mathaf and Istanbul Modern are among 250 prestigious international institutions to go online through the project.

Specialized expertise on a single artist or art movement will develop as a result of estate management, researchers working on catalogue raisonnés or monographs, and independent dedicated research. These individuals will become the authorities responsible for providing legal verification using expertise and “judgement by eye” acquired through years of research and accumulated visual exposure, and may establish an authentication board available to the public.

What we have today are all-artist experts, who provide potential buyers or dealers simultaneous verification on a Gazzar, a Said and a Tahia Halim. Their consensus should be used only as a starting point, as it is often built on fragile foundations, such as assumptions, memory and general knowledge, and not backed by conclusive research. Naturally, some fakes are so obvious to a trained eye that they do not necessitate much discussion. Likewise, misattribution can inadvertently happen, even by the most highly regarded experts, as seen in numerous international art forgery scandals where curators and museum experts were duped by a forger-artist’s proficiency. But specialized experts can minimize the chances of making a mistake.

Finally, a scientific laboratory using up-to-date techniques and tools to examine the properties of artworks is required. These methods help validate the age of the artwork’s components and hence distinguish between the forged and the authentic by identifying forgers’ mistakes. In addition, they help date authentic but undocumented works of art, which can lead to extraordinary findings.

Jehane Ragai, of the American University of Cairo’s Chemistry Deparment, has extensively studied this area and published a paper, The Scientific Detection of Forgery in Paintings (2013). She could be a great asset in setting up such a laboratory.

In her paper, she refers to a specific scientific technique that could have solved the controversy around Said’s La Fille Aux Yeux Verts (The Girl with Green Eyes). This painting was scheduled to go under the hammer in October 2007 at Christies in Dubai, but the Egyptian government requested its withdrawal from the sale as they believed it was a painting of theirs, misplaced. Had there been a catalogue raisonné, a proper system to archive and track loans at EMMA and a science lab to validate authenticity, the Egyptian government would have understood that the painting at Christies was not theirs, but in fact an authentic replica produced in 1932 by Said himself that Charles Terrasse, a Frenchman and the head of the equivalent of the fine arts sector at that time, had acquired in 1936 from the artist. EMMA’s painting was the first La Fille Aux Yeux Verts, made in 1931 and acquired before 1935 by the museum. The painting travelled to our embassy in Washington DC on loan in 1950 and also hangs today at the residence of the permanent representative of Egypt’s mission to the UN. This important discovery — that two La Fille Aux Yeux Verts exist, the first suspected stolen but in fact on a wall belonging to the Egyptian state in the US, and the second in private hands — was confirmed by the January 1936 edition of La Semaine Egyptienne, a weekly magazine. It published a list of Said’s paintings with pictures, citing “La Fille Aux Yeux Verts, painting # 2, collection of the Egyptian Museum of Modern Art in Cairo” and “La Fille Aux Yeux Verts Replique, painting #80, collection Charles Terrasse Paris.” 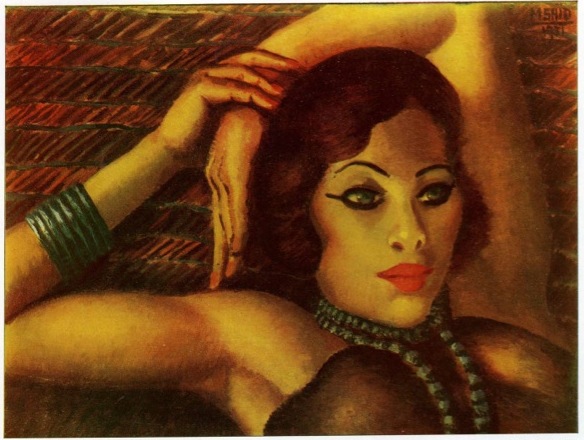 The above actions will not eradicate dubious deals, art forgeries or erroneous authentications entirely, but they will certainly minimize them, curtail the chaotic environment and provide confidence inside and outside of Egypt.

A platform such as the recently launched art research and writing project MHWLN (pronounced “Mohawelloon,” and borrowing its name from the late-1930s Les Essayistes, an avant-garde francophone intellectual organization in Egypt) could broaden its vision and become a neutral think tank under which galleries, dealers, researchers and artists meet regularly to brainstorm and publish codes of ethics and general art market practices. To financially back up these projects, a search for individual and corporate art patrons is paramount.

If we don’t act imminently and remain silent, we will witness the gradual erosion of the cultural significance of our heritage. And only when we have secured our past will we be able to confidently look forward to a brighter future. As artist George Henein (1914-1973) said, “Despair is the storm after which springs forth the great salvation.”

See part 1, on recent cases of fraud and negligence and why they are happening, here.

AD
You Might Have Missed
Mugamma revisited: Reimagining the building and the square
What we talk about when we talk about trees
Carbon Colonies & A Green New Deal
Where do old lesbians go to die?
AD
Fatenn Mostafa Kanafani
5 articles on Mada

Topics
Related
Abdel Hadi al-Gazzar
Buyer beware, part 1: The rise of art fraud in Egypt
Fatenn Mostafa Kanafani | The legal case recently launched by the family of late Egyptian modernist artist Abdel Hadi al-Gazzar
Ahmed Naji
The bourgeoisie, real estate & nation-building, or how the Egyptian & Middle Eastern art markets operate, part 1
Ahmed Naji | In 1989, Egyptian billionaire businessman Nassef Sawiris walked in to a trade fair at the Marriott Hotel
American University in Cairo
Toward an art that hides nothing behind
Adham Selim | Ganzeer’s metaphor imagines the world as a spectacle, something that you can choose either to gaze
Cairo bombings
The past and future of the bomb-damaged manuscript museum
Elena Chardakliyska | Early on January 24, 2014, a bomb exploded in front of the Cairo Security Directorate, just across the