The legal case recently launched by the family of late Egyptian modernist artist Abdel Hadi al-Gazzar (1925-1966) against art forgery has opened a Pandora’s box. The investigation seems to be expanding from Cairo to London, with charges related to alleged sales of illegal imitations (fakes) or imagined reproductions, falsely attributed to Gazzar and other prominent late artists.

At least two defendants — an art dealer and an employee at the Ministry of Antiquities — are accused of selling fake copies of paintings with falsified certificates of authenticity. Thirty works, misattributed to modernist painters Ragheb Ayad, Samir Rafi and Gazzar, were found in their possession and confiscated. One is a copy of Gazzar’s Adam and Eve (1948). The Gazzar family could not have chosen a better time to bring the issue to the public attention, as “fighting corruption” is one of the recurring themes in the current government’s narrative. 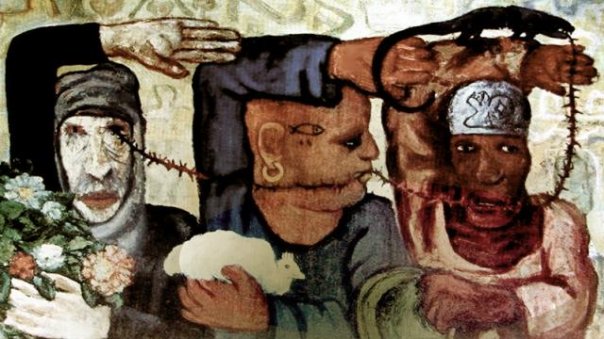 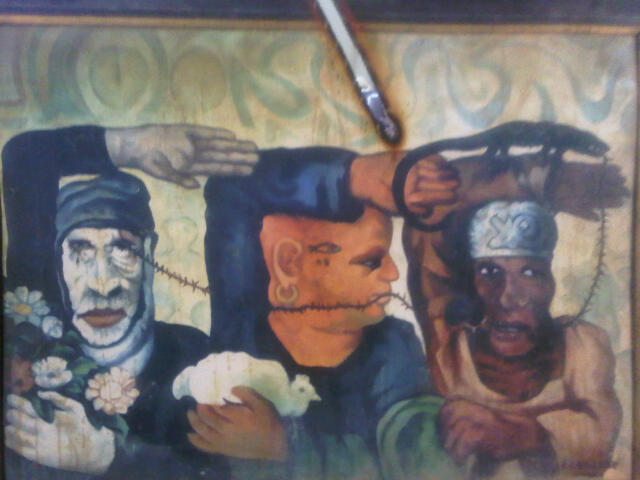 The Gazzar daughters, Fairouz and Yasmeen, are also questioning the whereabouts of one of their father’s important works, High Dam Man, or as originally titled, High Dam. The painting, according to the management of the Egyptian Museum of Modern Art (EMMA) and the 2007 book Abdel Hadi El Gazzar by late art historian Sobhy Sharouny, was acquired by the museum the year it was produced (1964), “gifted” to Gamal Abdel Nasser’s Socialist Union Party in 1967 and then sold (date unknown) to Hosni Mubarak’s now defunct National Democratic Party (NDP).

The museum suspects the work burnt in 2011 when the NDP building was set ablaze. Based on a letter dated November 24, 2014, written by the former head of the Principal Administration  of  Technical Support  for  Museums and Exhibitions and posted on a Facebook page “El Gazzar and the High Dam” administered by the Gazzar daughters, the Fine Arts sector, which is responsible for EMMA and its 15,000 artworks, seems to have closed the case because a “gifted” work of art is no longer under its jurisdiction.

Unconvinced, the family is challenging this version of events with official documents showing that the work was on loan starting 1968, and not donated in 1967 to the Socialist Party. They also state the painting was in the collection of the Fine Arts Museum in Banha in both 1966 and in 2010, based on Sharouny’s 1966 book Abdel Hadi El Gazzar: The Artist of The Legend and The Space World and the 2010 book Abdel Hadi El Gazzar: A Reading Into The People’s Soul by researcher Inas El Hindi. The Gazzar family also claims to have seen the painting in an upper floor in the Cairo museum in 2012 when the museum organized an anniversary exhibition for the artist.

The daughters also shared pictures, on the Facebook page, of the deplorable conditions in which their father’s works were stored in the museum’s storage area.

The family insists the fine arts sector must be held accountable for negligence for the disappearance of High Dam Man and for its breach of trust in caring for Gazzar’s heritage. During a televised face-to-face interview between Doha Mounir, director of EMMA, and Yasmeen El Gazzar, daughter of the artist, on March 25 2015 on Dream TV, the museum director highlighted the sad truth that the museum employee responsible for supervising works on loan gets a LE7-per-day (US$1) travel allowance and uses his private camera as the museum does not own one.

While this investigation into possibly forged Gazzar artworks has been taking place, another fraud allegation appeared, this time in Alexandria, between an artist-turned-collector and one of Egypt’s established art critics and authors.

The former claims to have acquired paintings attributed to some of Egypt’s pioneer artists based on certificates of authenticity and reassurances received from the latter. In return, the latter, a member of the Atelier Alexandria for 45 years and author of centenary books Mahmoud Said (1997) and Effat Nagi: Magic of Objects (1995) among others, refutes the allegations and accuses the “collector” of forging the works and using the author’s name to ensure appropriation of one of the works as a Gazzar. The author is in the process of publishing a book on art forgery in Egypt to set the record straight and to disclose names of forgers he is aware of.

The controversy started when the Gazzar daughters retaliated upon seeing, on social media, a hideous painting misattributed to Gazzar. The painting was titled The Quest, exhibited in Alexandria in 2013, and documented in a book published by the artist-turned-collector about his private collection. It is yet not clear whether the feud will reach the courts.

The primary reason for art fraud is financial gain. It is a lucrative business. Unsuspecting victims are usually well-to-do people who seek good investment opportunities and want to hang art on their walls as a sign of sophistication. They lack art knowledge and hence are easy prey.

The birth of an art fraud market

The emergence of fake artworks can be traced to the surge in sales of Egyptian modern art in the early 1990s. Historically, private acquisitions of art produced by Egyptian modernist artists were insignificant, so there was no need to make and sell fakes. Since the fine arts school was founded in 1908 until the 1960s, artists’ donations to extended family members and friends as well as purchases by a handful of foreigners living in Egypt and scarce Egyptian aristocrats complemented the government’s acquisitions and leading role as an art patron.

By the early 1990s, the situation was changing. Fueled by a few serious Egyptian buyers, a couple of prominent regional collectors and the appearance of auction houses in 2006 in the Gulf, demand for high-quality works by Egyptian modernist pioneers finally saw the light.

When news spread that Egyptian telecom tycoon Naguib Sawiris had closed a deal worth LE1.5 million for two works by Gazzar in 2003, the market and potential art forgers took notice. It took Laila Effat, the artist’s widow, years to agree to part with The Green Man (1951) and Zeleikha’s Wedding (1948). There were three interested parties, but the new lucky owner would be Sawiris.

Two high-profile regional art collectors had appeared on the scene a decade earlier than Sawiris and were discreetly amassing abundant works by Egyptian pioneers with the help of a few local art dealers and galleries. Their hunt was easy since there was hardly any competition from local buyers.

Mohammed Said Farsi, a former mayor of Jeddah with a reverence for Egyptian culture, single-handedly built the most comprehensive and exceptional collection of modern Egyptian art in private hands, running into several hundred works. A Museum In A Book: The Farsi Art Collection – The Egyptian Works was published in 1998, under the authorship of Sharouny, to document Farsi’s Egyptian modern art collection.

Starting in 1994, Sheikh Hassan al-Thani, cousin of the current Qatari emir, would acquire Egyptian modern art as part of his broader interest in art produced by Arab artists. To assure the permanence of his private collection and make it an accessible resource for Qatar and the world, Thani placed it under the care of the Qatar Museums Authority in 2003. The breadth of the collection was revealed in 2010 at the inauguration of Mathaf, Arab Museum of Modern Art, in Doha.

In a country that barely had an art market less than three decades ago, this rapid succession of events and soaring prices created fertile ground for a “fake art market” and wannabe art dealers. While it is impossible to estimate the market size, dozens of paintings judged by dealers, scholars and seasoned collectors to be fakes have been circulating in the secondary market over the past two years — some poor imitations, others more disputable.

“This is an excellent work. In fact, it is better than my authentic painting,” the late artist Hussein Bicar (1913-2002) wittily replied in the late 1990s to an unsuspecting collector who had just been fooled into buying a fake Bicar. Hussein Shaboury, who owned an art gallery bearing his name in the 1990s in Alexandria, recalls seeing a Hamed Nada (1924-1990) dated 1928, when Nada was four years old. In 2012, a small lesser-known auction house in London offered a poor copy of a documented Nada painting that hangs in a collector’s home in Cairo. The Egyptian seller had provided the auction house with false authentication documents. This murky situation puts into question some of the private deals that have been and possibly are still to be concluded. Unnoticed forgeries have landed in private homes and regional museums. Most owners of fake artworks are not aware they have been duped. And when they find out, they either do not act, or settle out of court. Hence, art fraud investigations are not common in Egypt.

The 2015 Gazzar lawsuit seems to be the second. Back in 2005, a private Egyptian collector launched the first legal case against a prominent art dealer. The procedure took years, with the two defendants initially found guilty and sentenced, only to have the sentences overturned on appeal. The case never came to closure as the second defendant died in 2011. The absence of stringent laws against art fraud and the difficulty of proving the defendants’ intent to defraud were main bottlenecks — despite the fact that an expert panel had confirmed the works were forged.

Interestingly, in both the 2005 and 2015 legal cases, no other duped buyer or heir of a pioneer artist whose work was also forged launched a parallel investigation. Legal investigators seem to have difficulties comprehending the prices such works carry. Professors from fine art schools, acting on individual basis, have stopped giving judgment and certificates of authenticity — temporarily and out of fear. The confidence of most collectors gets shaken as they question what they possess and the authenticity of what they are now offered. Eventually, potential buyers shy away from Egyptian modern art altogether.

See part 2, on possibile solutions for these issues, here.

AD
You Might Have Missed
What we talk about when we talk about trees
Where do old lesbians go to die?
Carbon Colonies & A Green New Deal
Mugamma revisited: Reimagining the building and the square
AD
Fatenn Mostafa Kanafani
5 articles on Mada