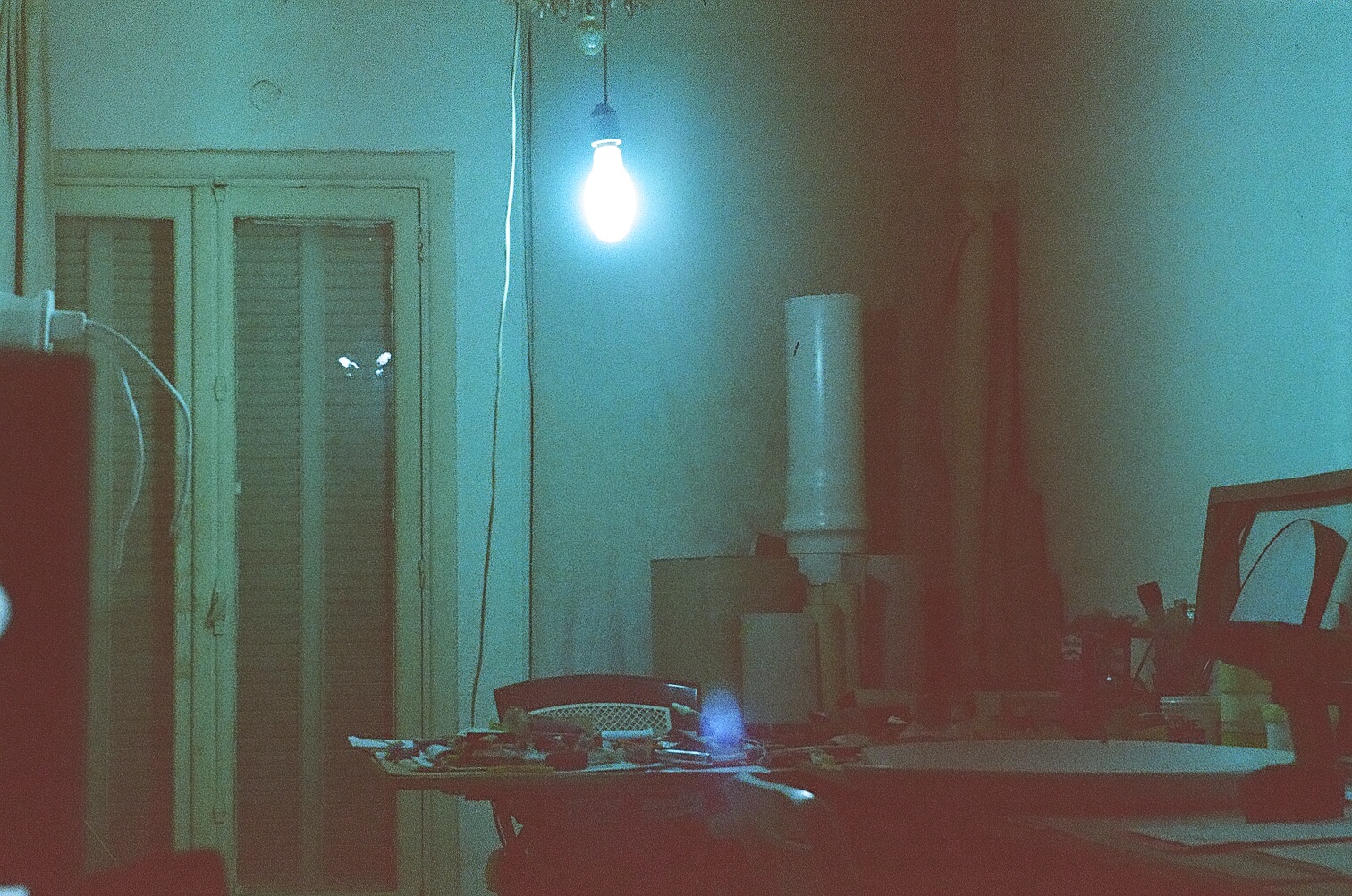 Ahmed Badry has been working out of his apartment in Cairo’s central Mounira neighborhood for the past four years. Before that, he worked in a tiny room with just a bed and a toilet on the rooftop of the building across the street. Because it was so small, he would have to spread the canvas across the walls in the corridor leading to his room in order to create his large-scale paintings.

He has more space in this apartment, but he still has to construct his objects as individual parts and assemble them in exhibition spaces. Ahmed is sharing his two-bedroom apartment with a flatmate who doesn’t seem to mind that his studio takes up half of their space. Ahmed’s presence is felt powerfully throughout the apartment, with his old artwork hanging on the walls. Although it is quite small, he has managed to utilize what little space he has to the best of his abilities. Giant sheets and rolls of cardboard rest against the walls and huddle in the corners of his studio space. A large plastic pipe extends along the corridor that leads to the other half of the house where the bedrooms are, and underneath his work desk is a labyrinth of textures of old, unused materials — plastic bags of mysterious content and hollow rolls of cardboard — all effortlessly coexisting in a seemingly structured chaos. 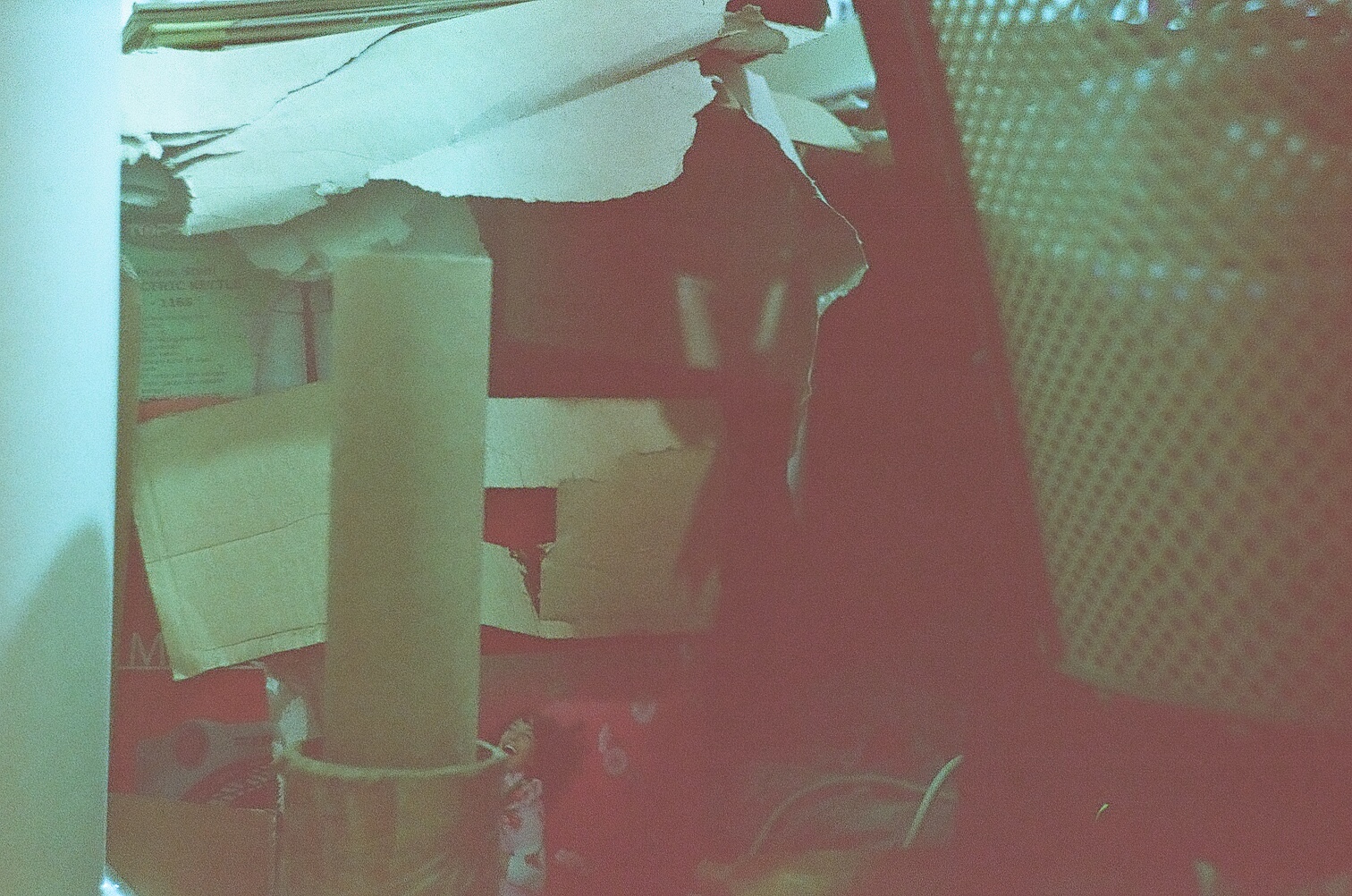 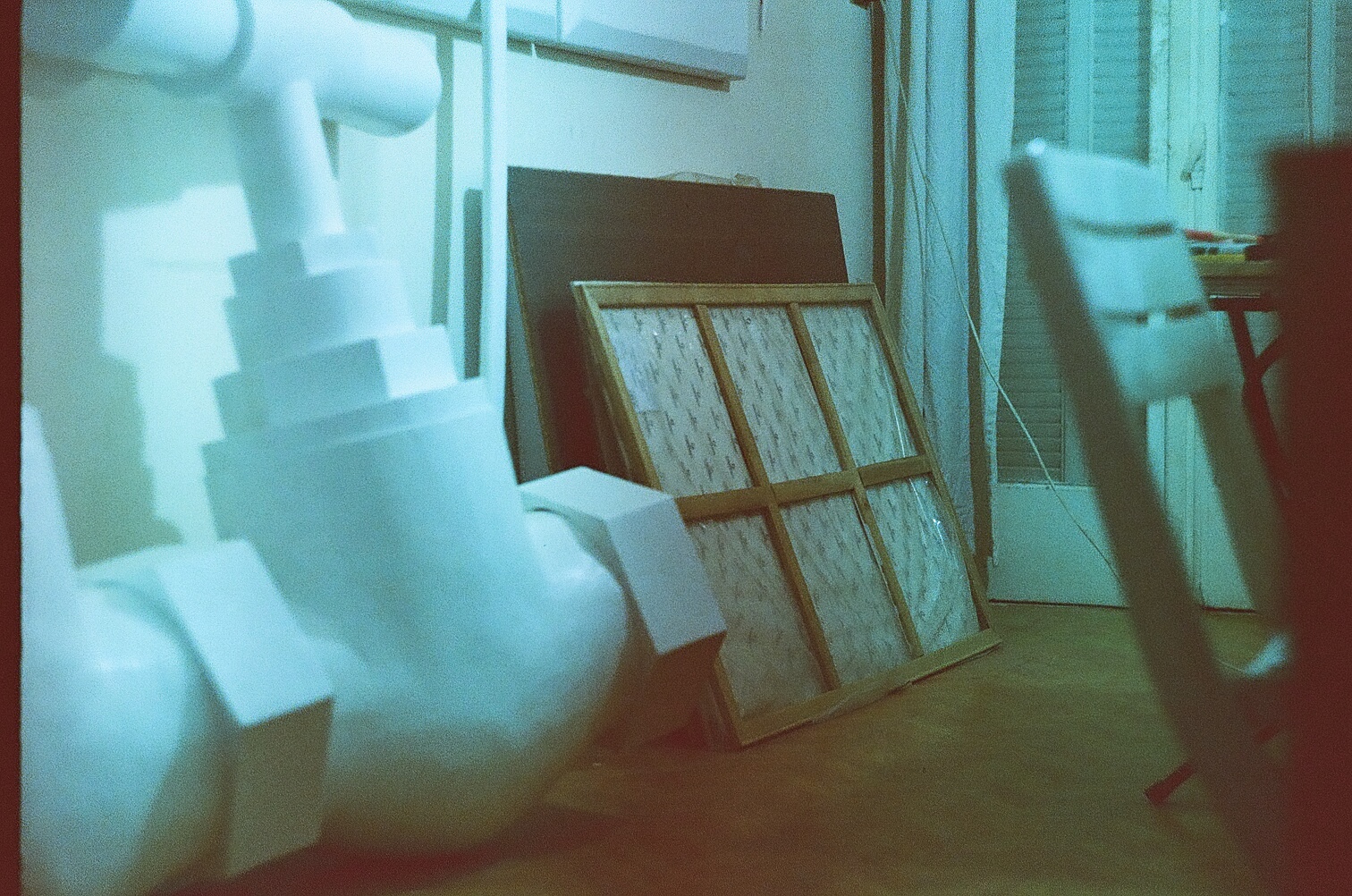 Ahmed’s artistic practice revolves around painting, drawing and photography, but recently he has focused primarily on sculpture. He feels that he can give more to his creations with sculpture, that the medium enables him to assign different masses to his ideas, thereby allowing them to reach their full material capacity.

Ahmed has been collecting images of comical household inventions and failures for the past four years (an iron used as a heating surface or taps installed so closely together that they are impossible to turn). He stores these images in his memory and in various folders on his desktop computer and makes cardboard sculptures that mimic these creative, upcycled and humorously dysfunctional objects, exaggerating their scale to unusable proportions, or in others, to highlight their failed design. The results are bizarrely giant, familiar objects of impecable quality and a fine, white finish. 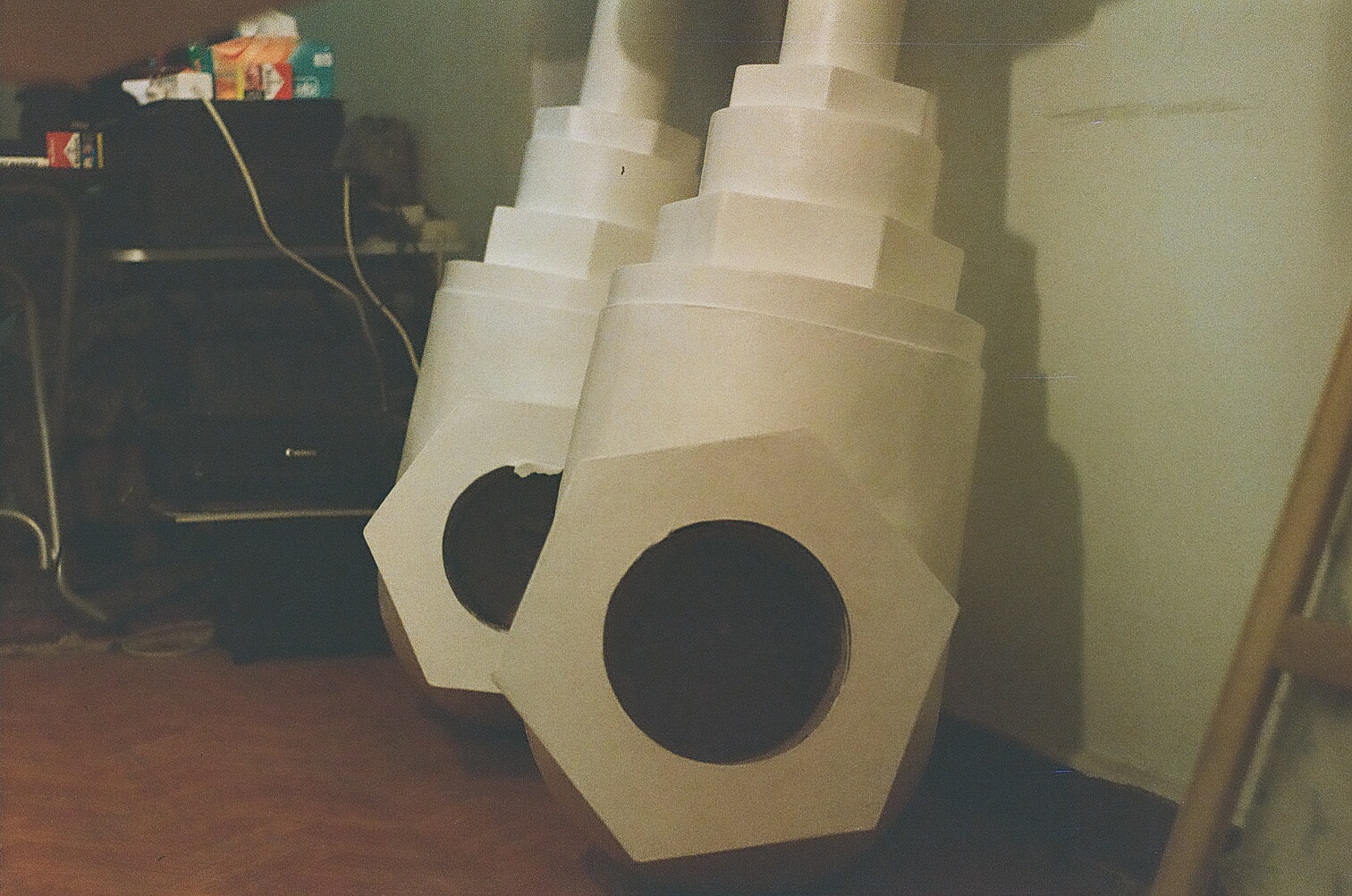 Ahmed graduated from Helwan University’s Faculty of Art Education in 2003. Initially, he hoped to attend the Faculty of Fine Arts, but his grades in high school were too low. So he visited the Faculty of Art Education, and liked the focus it offered on practical aspects of art-making. He loved producing work at the school so much that he didn’t want to graduate. His family was always supportive of his choice,  especially his father, who was very proud when Ahmed exhibited work with then-Minister of Culture Farouk Hosny in the third Small Artworks Salon, held at the Aisha Fahmy Palace in Zamalek in 1999.

His first experience with sculpture came as a student, when he was commissioned to make cement rock formations and other decorative sculptures for beach resorts in Sharm el-Sheikh: an interval that he recalls now with a hint of embarrassment, furrowing his brow. The fact that he was making money from his “trade” was another important factor that also encouraged his family’s support; artmaking wasn’t just a hobby.

Ahmed begins with a visual stimulant: an image that sticks in his head. Then he turns himself into a factory that’s producing a prototype, planning and sketching the sculpture-to-be multiple times. These are very different from the slick, single-line drawings he exhibits. The drawings he makes before he sculpts resemble architectural blueprints. They allow him to get a good sense of how the various components of the structure would finally fit together. He then multiplies the measurements with a calculated ratio to enlarge the dimensions while keeping the shape intact. Using a makeshift compass, he proceeds to outline the shape on a sheet of recycled cardboard, cuts it out, and repeats. He then assembles the cutouts together using strong tape, constantly adding layers until the sculpture is complete. 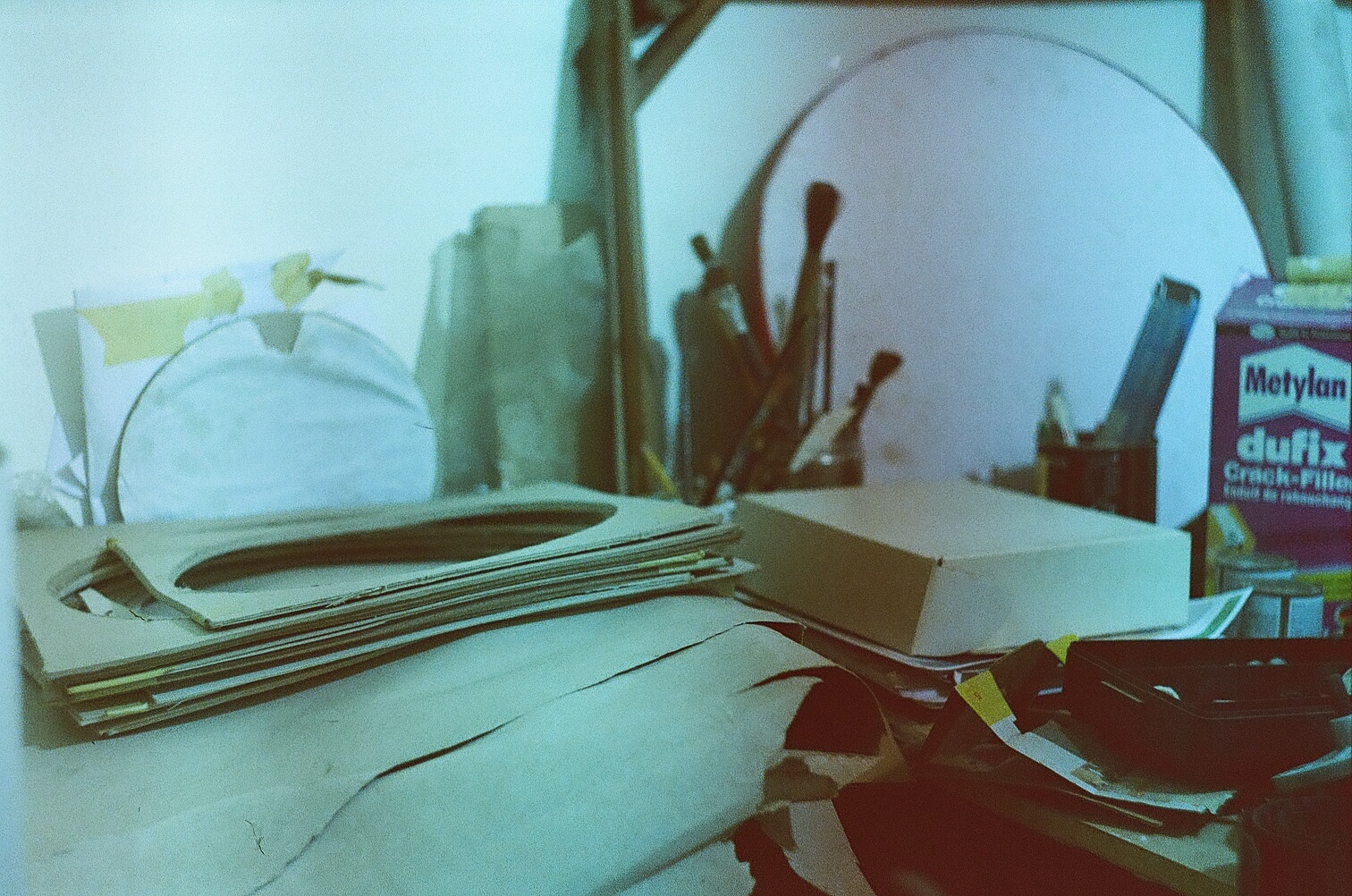 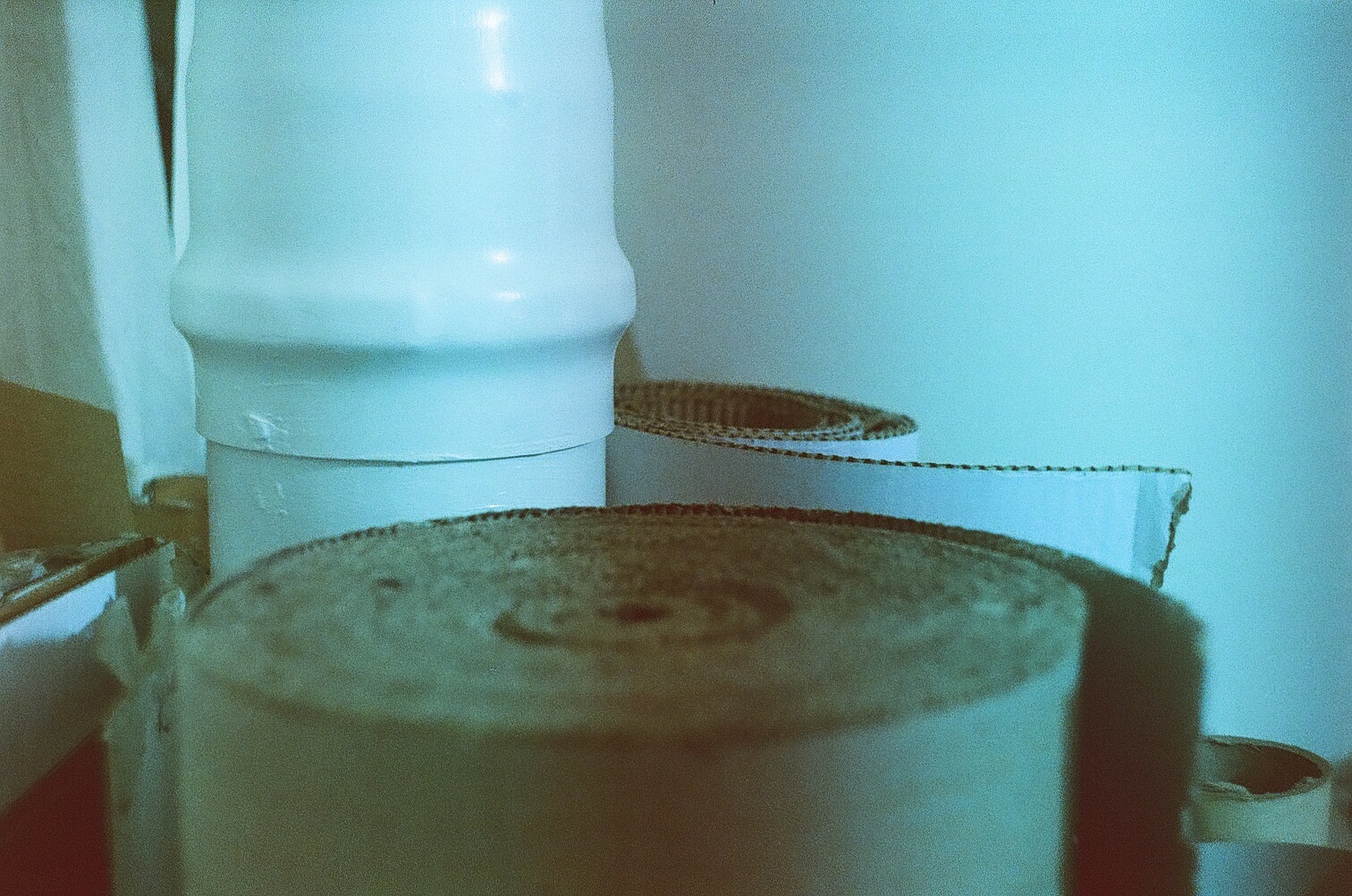 He gets his recycled cardboard from Cairo’s Attaba district, and reuses discarded cardboard rolls for circular shapes. He likes sculpting with cardboard because it’s light, and he finds it easy to control. Ahmed particularly enjoys the deception in the sense of mass that he can create using cardboard. His objects look extremely heavy, as if they were made from gypsum or even cement; only he knows how easy it is to physically interact with them, and their true light weight. 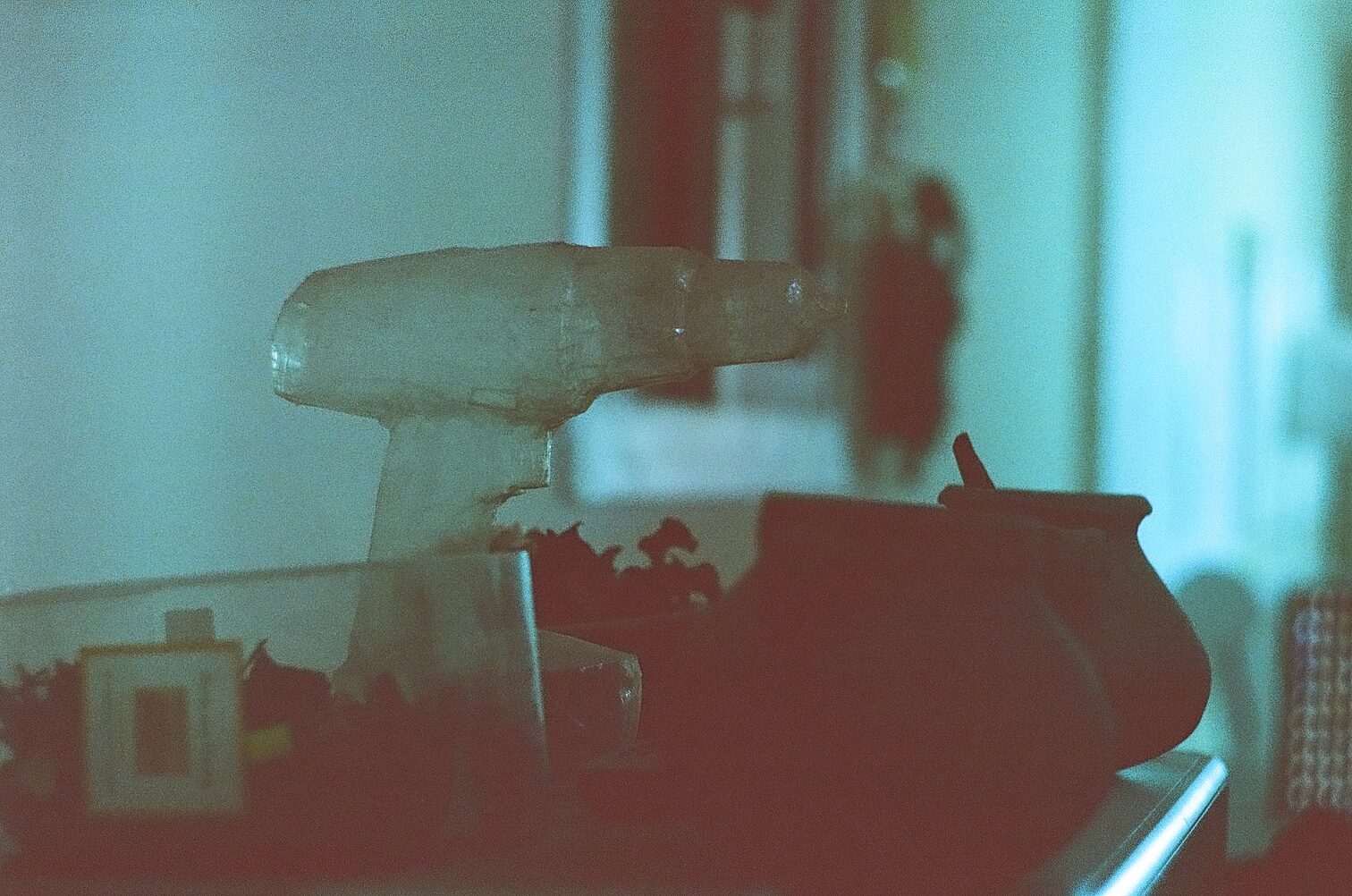 The first time Ahmed traveled abroad was in 2006, when he was awarded a scholarship to study painting intensively for five weeks at the Summer Academy in Salzburg, Austria. He remembers feeling like he could finally see beyond an imaginary wall that had always been there. He was more interested in the city than in his course, and spent the majority of his time exploring. It was also in Salzburg that he got the chance to draw a nude model for the first time, something he was never allowed to do as a student in Egypt, where art colleges have banned nude figure drawing. 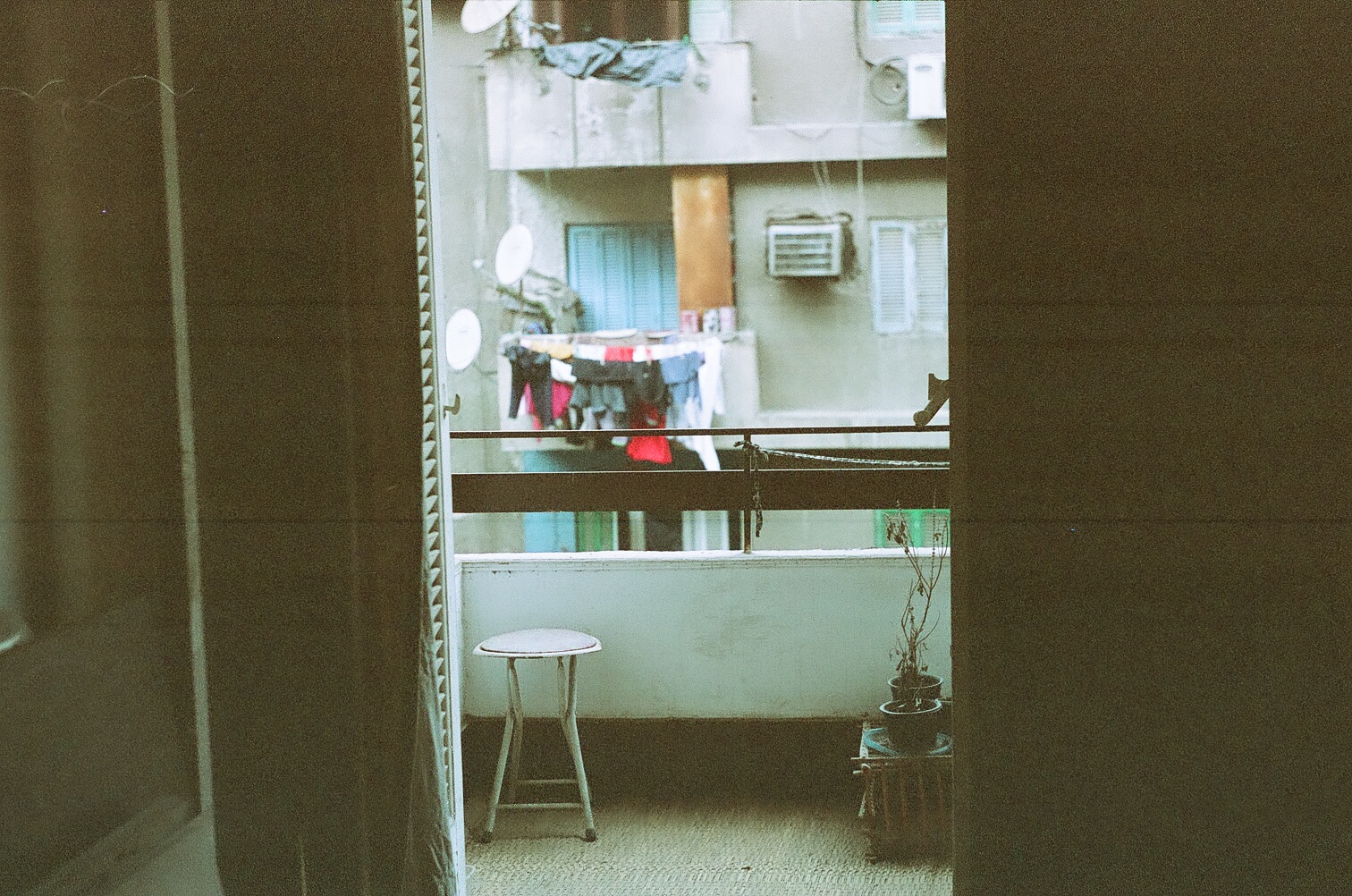 The first works he was ever proud of were shown a year later, at the 2007 Youth Salon in Cairo. Radio Station Cairo (120 x 120 cm and 120 x 240 cm) was composed of two large-scale acrylic paintings on canvas produced that same year, depicting a magnified radio frequency dial. Many of his peers questioned the point of enlarging such an odd household detail. However, the Radio Cairo paintings went on to win the  Official Salon Prize that year.

The exhibition also represented the first time he displayed some of his experiments with scale. In 2009, he exhibited Sona El Seen (Made in China, 12 x 8 x 1.6 m), a cardboard construction that occupied the entire foyer of the Palace of Arts. Cardboard boxes painted a shiny metallic silver were arranged to spell out the words “Made in China” in Arabic, which were only readable by looking down at the piece from the second floor of the exhibition space.

At first, he wasn’t completely sure what he was doing when he started dealing with scale this way, and says he acted on an instinctive desire to produce large objects. He explained that when an image got stuck in his head, it would take up all his thought space; recreating it in larger proportions, whether as a painting or sculpture, was all he could do, because that’s the only way he visualized it.

Ahmed has lived between Switzerland and Egypt for about three years, never staying more than six consecutive months at a time in Zurich. His first international solo show, 2 Minutes Delay, was held at AB Gallery in Zurich in August 2011. The press release described the exhibition as “an Egyptian view on Swiss peculiarities,” which Ahmed says echoed how he felt out of place at the time. 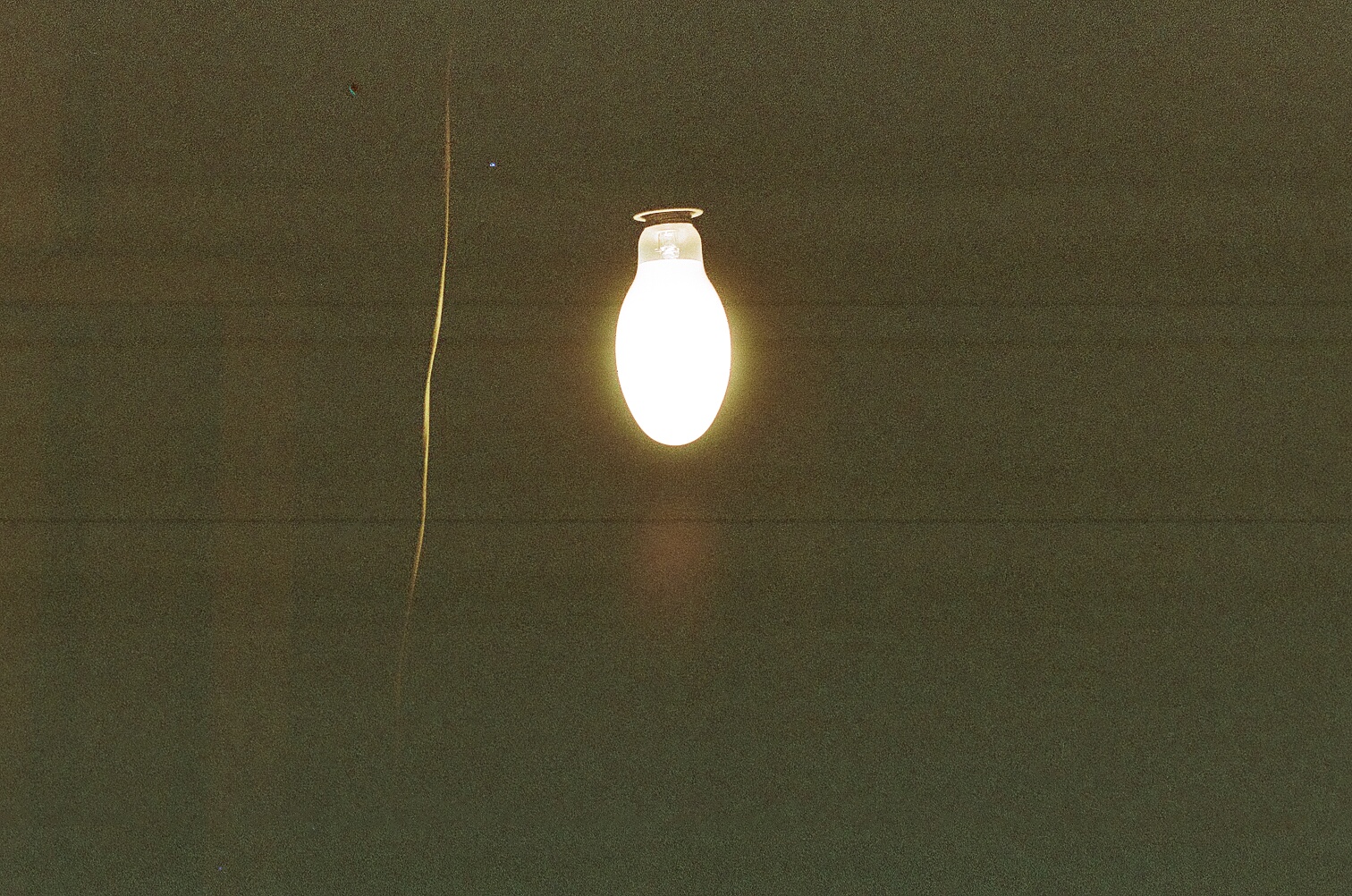 2 Minutes Delay was Ahmed’s attempt to understand how he fit into the Swiss system. While in Switzerland, his perception of time changed; he became aware of time’s weight and pressure, and found it difficult to exist in a world that he describes as calculated and materialistic. He felt that he was always running. Upon returning to Cairo, he noticed he was more anxious about time and his use of it.

However, being in Switzerland taught him technique and trained his hands to move with the precision that now allows him to give his sculptures their characteristic flawless finish. He worked on a part-time basis for a year at the Kunstgiesserei in Saint Galen: a large factory that produces works for artists worldwide. Working with a team comprised mainly of fellow artists, his job was to prepare the Styrofoam mold of an artwork before it was cast in wax by meticulously removing the air bubbles trapped between the Styrofoam’s tiny beads. His time at the Kunstgiesserei also completely debunked his belief in the necessity of the “artist’s touch.” He saw how artists who commissioned works played no part in the production process and how they never even visited to check on the progress; he realized that maybe it was not so crucial for an artist to be present for, or even take part in, the physical construction of his or her artwork, after all. He likens the process to photography: labs develop the actual image. 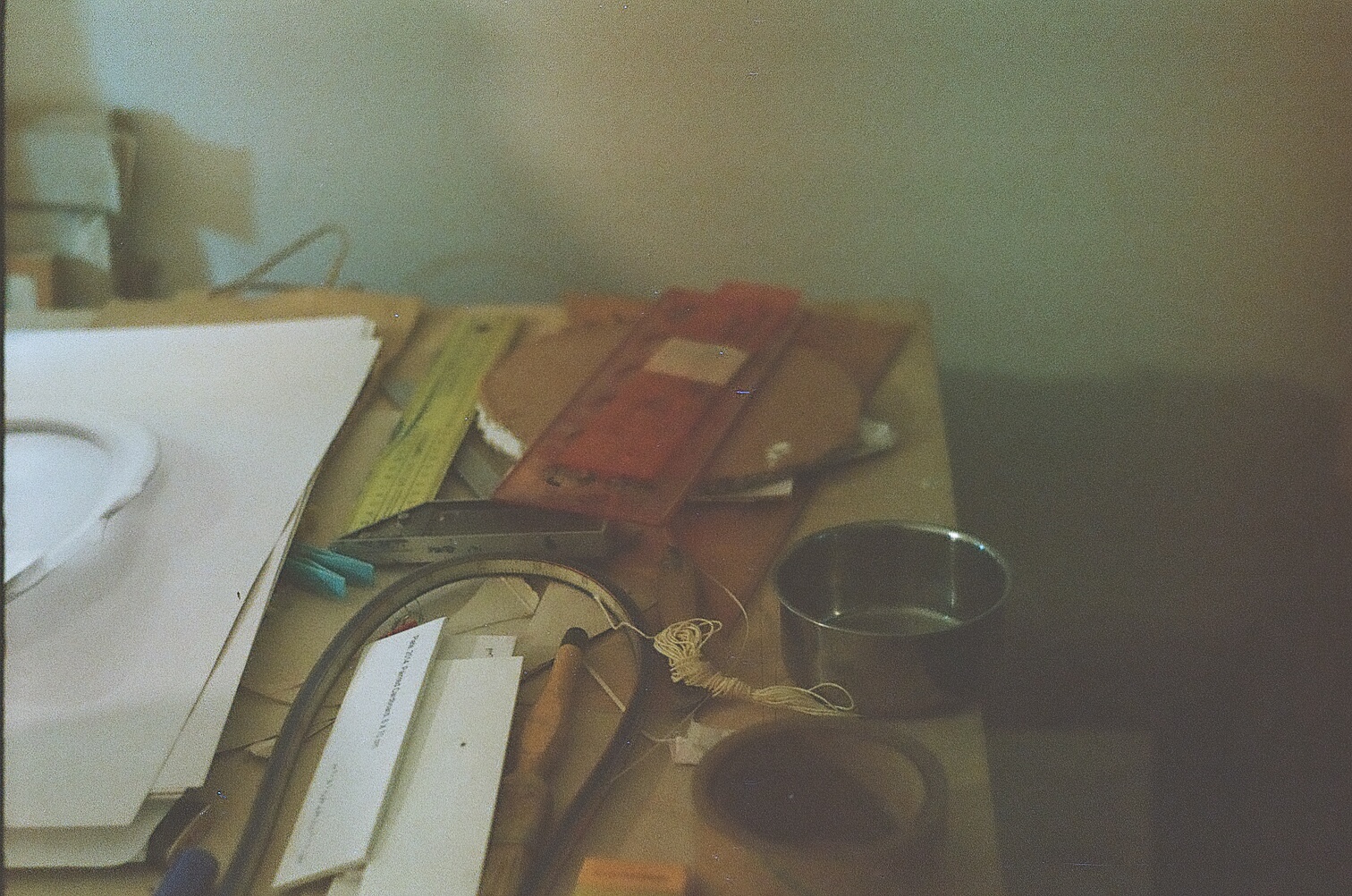 Ahmed has always worked at home. He says he wouldn’t mind having a separate studio space, but doesn’t have the money for it. Even if he did have a separate studio, he would probably sleep there with his work. Sleep is very important to Ahmed. His dreams are slow and detail-oriented. Sometimes great ideas come to him while sleeping, and he starts to work immediately upon waking up. He slept very little in Switzerland. 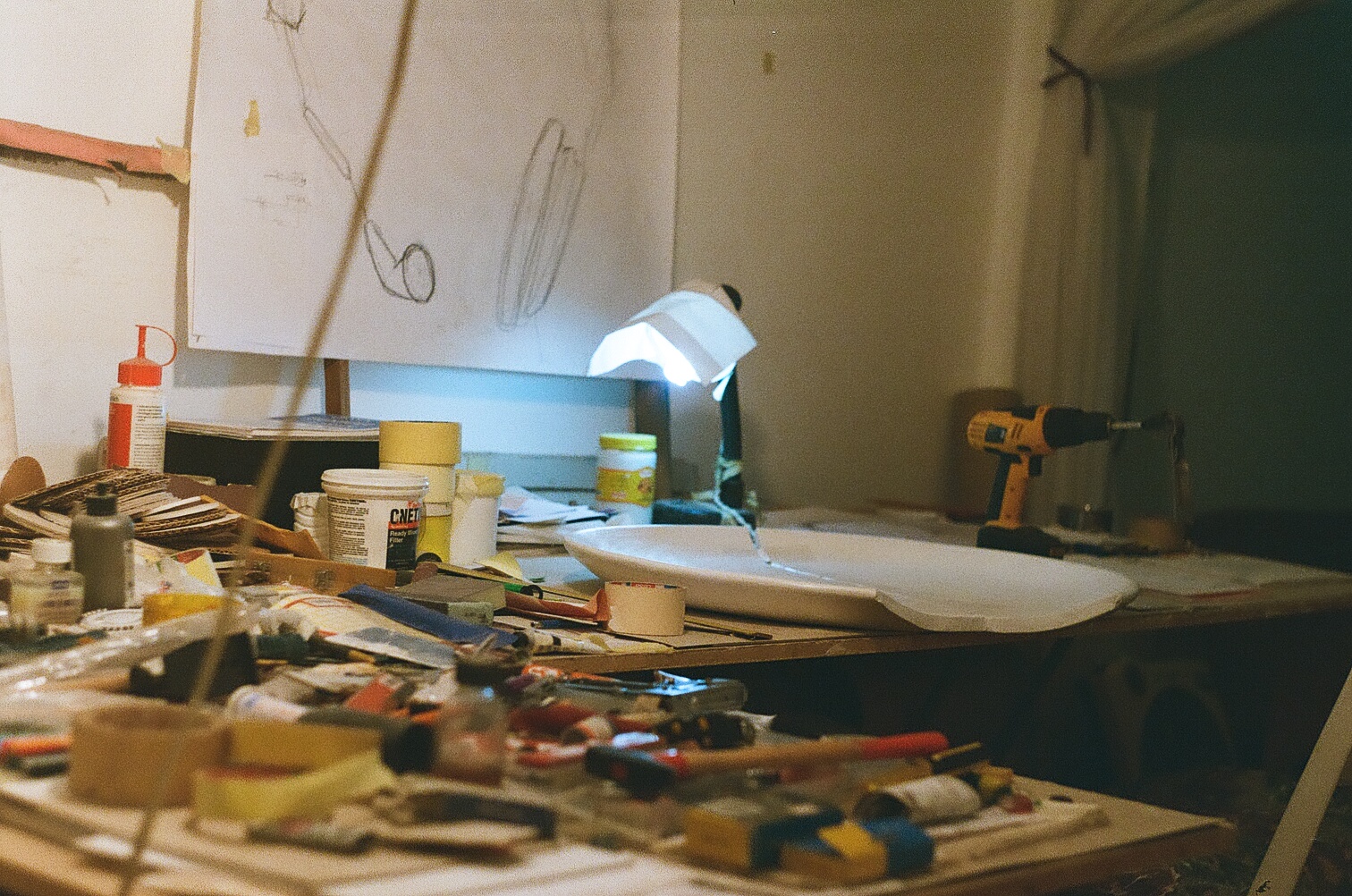 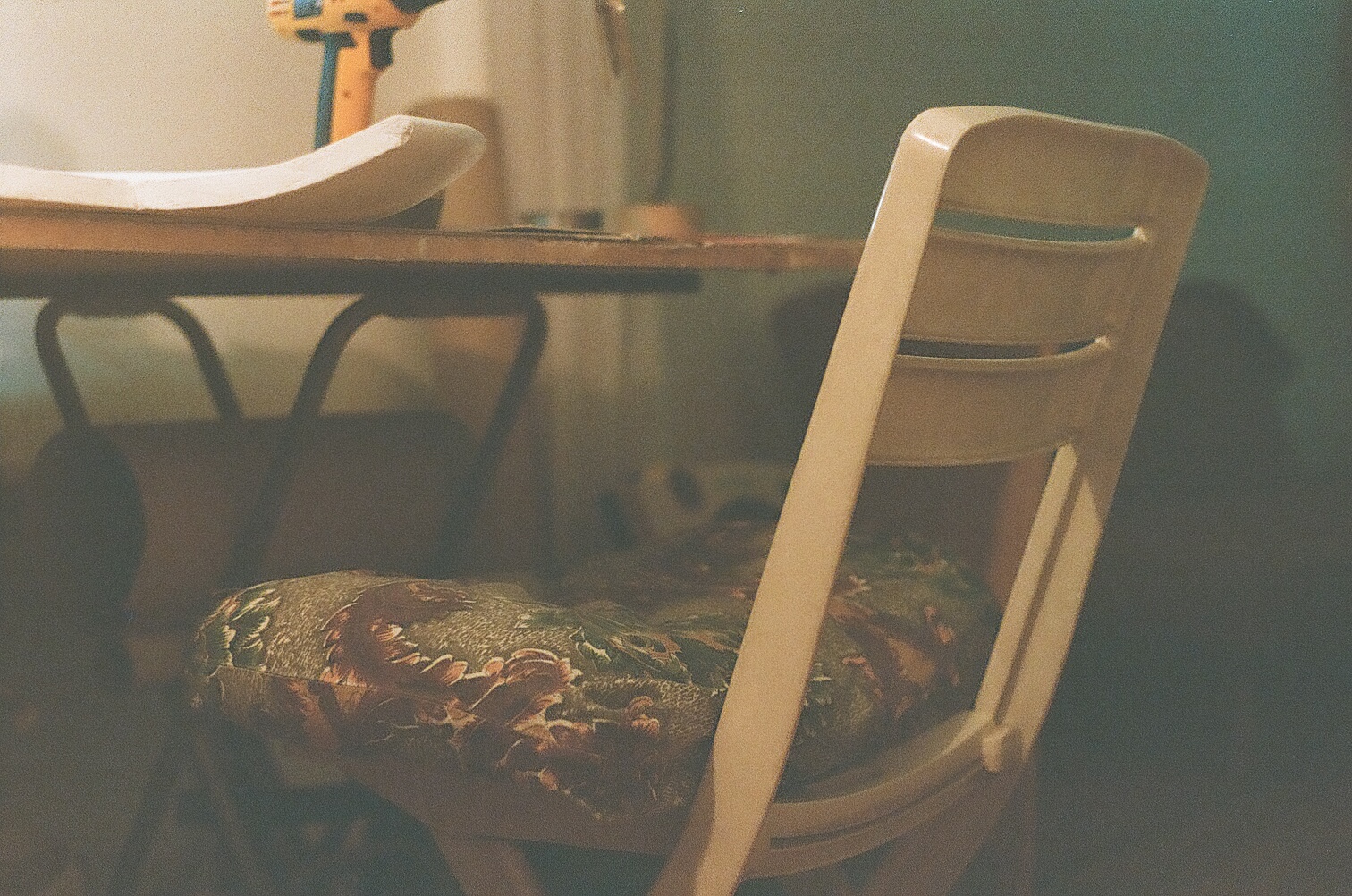 Before he moved to Mounira, he lived in Helwan with his family. He would travel to and from school for a couple of hours every day. He misses the time he spent commuting. He felt that the time was his own, and he used it to absorb everyone else’s energies as they shared the liminal experience of the bus ride together.

Ahmed fears he’s lost some of his ability to relax now that he has become aware of the weight of time. In Switzerland, he observed how energy can be utilized; coming back to Cairo, he realized how it was being used up. He recreates other people’s day-to-day attempts at harnessing and saving energy, and renders these necessary inventions infuriatingly useless by toying with their scale. Ahmed’s studio practice is directly related to his way of living, as well as the images he was attracted to and started to collect four years ago. The way he utilizes his apartment (constantly innovating so as to be able to create even bigger objects in the same small space), and his makeshift construction of two pencils and a large ruler with holes serving as his compass: these speak to how strongly Ahmed’s life is incorporated within his work.

All photographs taken by the author in the artist’s studio in February 2015.

Mada is publishing one part of Shehab Awad’s artists’ studios project each month. This project was carried out in the framework of MHWLN, a research and writing group dedicated to the history of contemporary art in Egypt.

AD
You Might Have Missed
Mugamma revisited: Reimagining the building and the square
What we talk about when we talk about trees
Carbon Colonies & A Green New Deal
Where do old lesbians go to die?
AD
Shehab Awad
3 articles on Mada