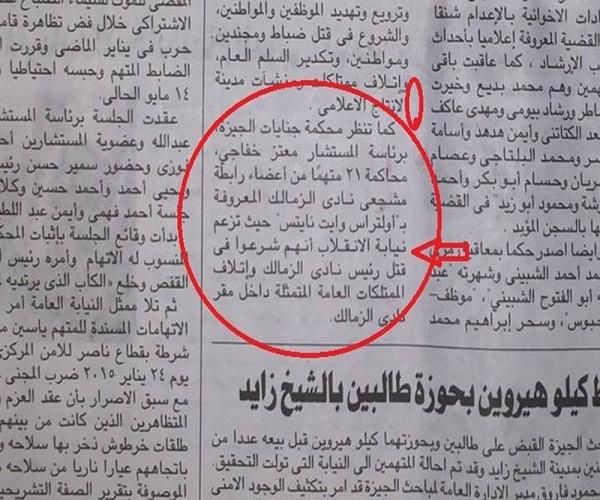 The state’s flagship newspaper Al-Ahram has once again found itself in dire straits, forced to apologize for describing the General Prosecution as the “coup’s prosecution” in a report published Monday.

The report in the newspaper’s print edition, titled “From Khanzendar to Khafaga … The Muslim Brotherhood continue to target justice,” describes an alleged failed attempt to assassinate Judge Moataz Khafaga earlier this week and compares it with the assassination of Judge Ahmed al-Khazindar in 1948.

The report’s last paragraph mentions that the Giza Criminal Court, which is headed by Khafaga, is trying 21 members of the Ultras White Knights, and that “the coup’s prosecution claims they attempted the murder of the head of the Zamalek club as well as vandalizing public property inside the club.”

The gaffe prompted an avalanche of sarcastic reactions on social media, some suspecting that the newspaper merely copied that paragraph from a pro-Brotherhood website and neglected to correct it.

Others accused the Muslim Brotherhood of infiltrating the 140-year-old institution.

The “coup’s prosecution” is a term typically used by the Brotherhood in their statements and news, in line with the ongoing media war over whether June 30 was a people’s revolution or a military coup.

On Friday, Al-Ahram published a clarification and apology in its print edition, saying the report erroneously described the prosecution with “an inappropriate term that doesn’t reflect the history of its men in serving justice and the nation.”

Al-Ahram emphasized that the error doesn’t reflect the newspaper’s editorial policy, which in reality reflects the will of the majority of Egyptians and the June 30 revolution.

“The term was taken out of context and it is merely an unintentional mistake,” Al-Ahram wrote.

It added that several media outlets serving other agendas, as well as those belonging to the Muslim Brotherhood, were using this error to undermine Al-Ahram.

That last paragraph of Monday’s report was deleted from Al-Ahram’s online edition.

Topics
Related
Al-Ahram
MENA slams Al-Ahram for accusations in NYT article controversy
A new contender appeared in the most recent round of media war between the state-owned Al-Ahram daily
Al-Ahram
Al-Ahram apologizes in English for skewing NYT article, but takes it back in Arabic
The uneasy exchange between the state-owned daily newspaper Al-Ahram and the US-based paper the New York