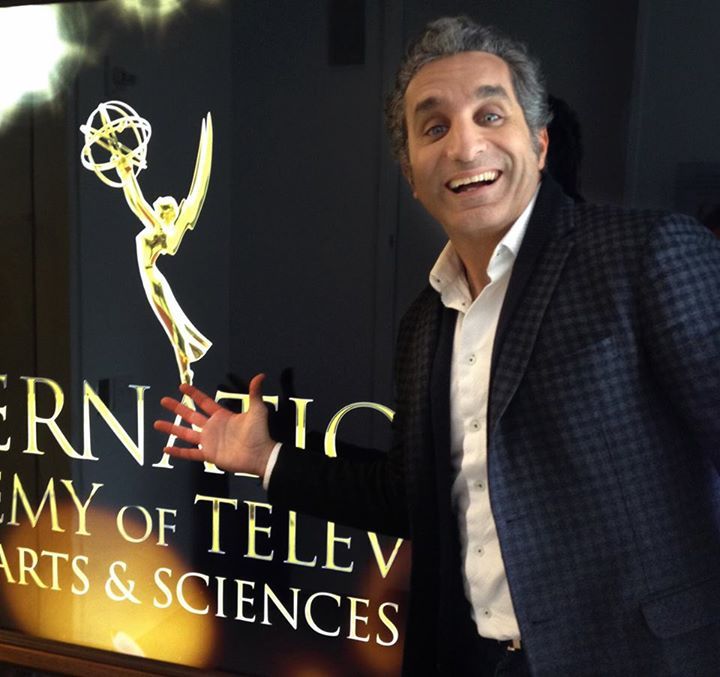 The International Academy of Television Arts and Sciences (IATAS) released a statement on Monday announcing that Youssef had been chosen as the host.

The statement quoted the President and CEO of the International Academy of Television Arts and Sciences as saying, “Through his own show and his many appearances on the Daily Show, he (Youssef) has become a comedic force and important political commentator around the world.”

Youssef Tweeted the same day, “I am proud to be chosen to host the International Emmy Awards Gala in New York in November. This is the first time it will be hosted by someone from the Middle East.”

A statement by the Academy quoted Youssef saying, “I am extremely honored to be chosen following the footsteps of incredibly funny and distinguished comedians like John Oliver and Matt Luca, who hosted the ceremony in the last two years.”

Youssef hosted the satirical TV program Al-Bernameg until June 2014, when he announced the end of the show, citing threats to his safety and that of the production team as part of the reason for his decision.

Al-Bernameg became the most popularly watched show in the history of Egyptian television, with an average of 40 million viewers tuning in every week and over two million YouTube subscribers, according to the IATAS’s statement.

The show was known for pushing the boundaries of what was acceptable in Egyptian media and multiple cases were filed against Youssef under the presidency of former President Mohamed Morsi and continued after his ouster.

After the show ended, Youssef joined the Harvard Institute of Politics at the John F. Kennedy School of Government as a resident fellow for the spring semester. He is also taking part in a documentary about his life, “Tickling Giants.”

The International Emmy Awards Gala celebrates television shows outside the United States. Youssef said, “Being the first host from the Middle East will put more responsibility on my shoulders to serve in this position in the best way I can and I hope this will shed more light on the vibrant entertainment industry in my region.”