Sherif leans on the wall for support as he walks towards his bed, while his wife Thanaa lies opposite him in the HIV/AIDS department of Abbasseya Fever Hospital.

In his 40s, the condition has taken its toll on Sherif’s appearance and weight. He and his wife have been living with HIV/AIDS for over three years. Sherif suspects a blood transfusion, given to his wife at Suez General Hospital, for her infection, which was later transmitted to him.

Since November 2011, the couple has had difficulty receiving their monthly medication from Abbasseya Fever Hospital. “I used to go to the hospital every week, thinking that perhaps I could get the monthly dose, commuting from Suez, where I live. But it was always delayed for weeks. Meanwhile, my health deteriorated, and so did my wife’s,” he explains.

Sherif wasn’t able to keep his job as a sanitation worker in a government school, so he had to send his 15-year-old son Khaled to work in a seafood restaurant to help support the family, including his 10-year-old sister. They get a LE300 monthly government allowance for people living with HIV/AIDS.

“I hope I live until my daughter gets married,” Thanaa said in November 2013. A month and half later, she passed away.

The scope of the virus

Sherif and Thanaa are among 1216 people living with HIV/AIDS in Egypt who have access, in theory, to free medication. They make up a third of the official registered number of HIV/AIDS patients on Ministry of Health lists.

Out of the 1216 patients, 936 get their medication from three specialized fever hospitals: 350 from Imbaba, 450 from Abbasseya and 136 from Tanta. The rest obtain medication in other governorates, according to estimates by Walid Kamal, HIV/AIDS program director at the Health Ministry.

According to Health Ministry statistics from September 2013, the total number of people infected with HIV/AIDS since the first case was reported in 1986 in Egypt was 4,999, 1,358 of whom had died. Of the 3,641 remaining cases, 3,120 were in good health and 521 were living with a developed stage of infection.

Those who can afford to have been sourcing medication from overseas and are therefore not registered with the Ministry of Health, partly accounting for discrepancies in the numbers. 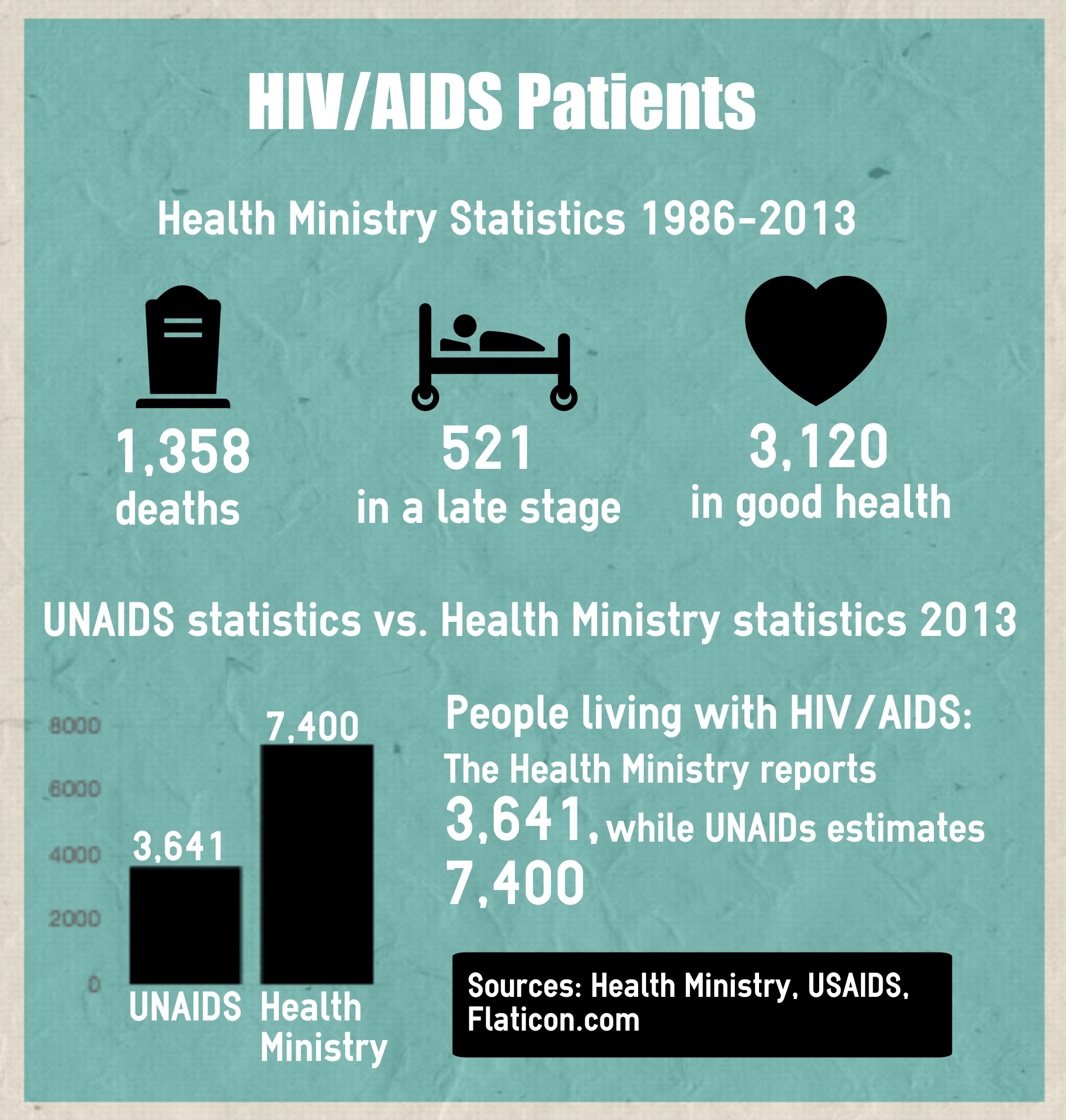 Of those living with HIV/AIDS interviewed for this study, many said they prefer to be treated in greater Cairo, away from their home governorates, to avoid social stigma.

The immunity of a patient is measured through T-lymphocytes analysis, CD4. This requires a regular test every three months with equipment that is only available at the Ministry of Health in Cairo and Alexandria.

Complaints of analyzers breaking down are frequent, forcing some to resort to testing in private laboratories for LE165, according to the HIV Care Association.

According to the WHO, the number of T cells for a person with HIV/AIDS to live in good health should be between 500 and 800, whereas the number should be higher than this for a healthy person. The WHO recommends starting treatment if the number of T cells is fewer than 350. However, in 2000, the Egyptian Ministry of Health started treatment only if the cells were fewer than 200, which means the patient is already in a later stage of viral development.

In 2008 this was changed, and the WHO upped the dispensing of treatment to those with 500 or fewer cells.

At Abbasseya Fever Hospital, Omar Abdel Khaleq’s ordeal with Egypt’s free dispensing system dates back 10 years. His immunity level decreased as a result of receiving his medication inconsistently, until it reached a level of 65 T cells in May 2012. This caused severe inflammation of the glands in his armpits and groin, in addition to an attack on his lymph nodes, according to medical reports.

Through counselling sessions organized by Caritas Association, Abdel Khaleq met with others living with HIV/AIDS and came to understand that he needed an immunity test and to source medication from abroad, which was too costly for him.

In 2012, the ministry told him he couldn’t have an immunity test in Egypt, as the analyzer wasn’t working, and that they couldn’t cover the cost of testing overseas.

Walid Kamal, the current director of the National AIDS Control Program at the Ministry of Health, admitted to the lack of analyzers and staff trained to use them, which he says they are working on rectifying.

Abdel Khaleq finally underwent immunity testing in two laboratories in October 2013. The first was in a central laboratory at the Ministry of Health and the second in a private laboratory. The results revealed that his immunity had deteriorated to a point of no return, according to Amr Gohar, who reviewed the results.

“Patient Omar, according to the standards set by the WHO, has a low immunity level by the T lymphocytes ratio CD4, because it is less than 350, which means that the patient is vulnerable to opportunistic diseases and has minimal preventive measures against them,” Gohar said.

A consultant on venereal diseases and British Royal College fellow said Abdel Khaleq’s immunity was affected by the irregularity of his medication, recommending further testing in Europe to determine the course of treatment.

In many cases, people living with the virus who take regular medication can maintain an effective level of immunity and live relatively healthy lives for years, because the medicine slows the development of the virus, according to the World Health Organization.

The HIV Care Association and independent doctors — including Abdel Hadi Mosbah, Amr Gohar, Mohamed Hamad and the UNAIDS official in Egypt Ahmed Khamis — all attribute the medicine crisis to bureaucracy at the Ministry of Health. The ministry waits until the medicine shipments run out, they say, with no consideration for lengthy application processes or shipping, meaning there is often a gap before the new stock arrives.

The UN Global Fund Organization supplies the medicine to Egypt’s Ministry of Health. This started in May 2008, at a cost of US$7.5 million, and is now worth US$10.2 million in 2015. 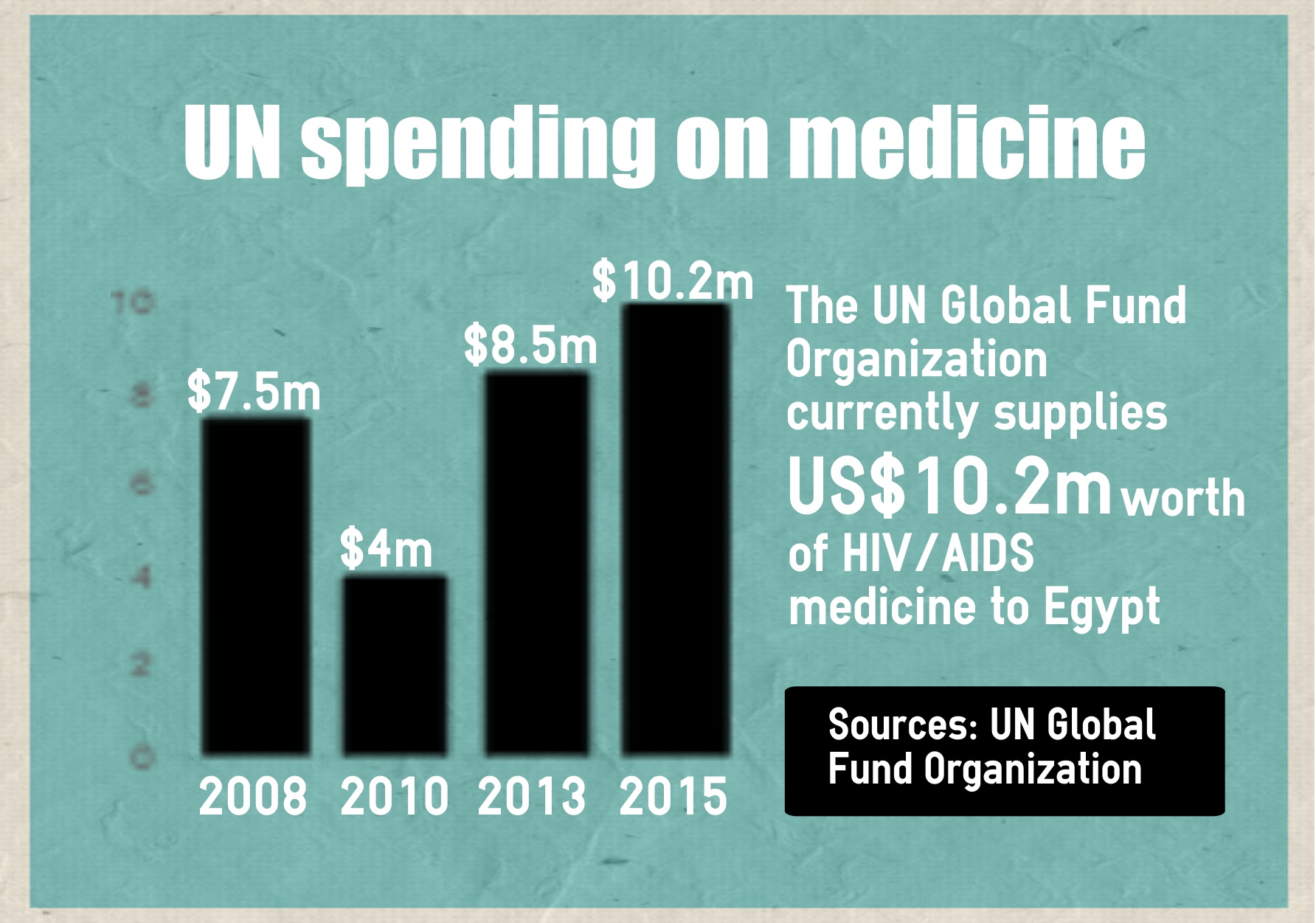 A complex vetting process starts from the moment the medication arrives at customs in Egypt, usually from America, India or Brazil, all of which have the rights to its manufacture.

A customs official says clearance is up to the two authorities responsible for the release of the imported medication — the Public Administration for Control of Exports and Imports and Controls on Pharmacies — both of which are affiliated with the Ministry of Health.

Under Law 106 (2000), after import and export control, the Ministry of Health forms a committee of 10 doctors to issue two reports on the shipment. According to the official, these reports are usually delayed due to ministry bureaucracy.

The journey the medication takes, from the date of application until the patient receives it, can vary from six to 12 months, according to UNAIDS. The Health Ministry denies this and refuses to declare any figures pertaining to drug shipments or the dates of clearance from customs.

The impact of delayed medication

Ziad is in his 40s. He lives with his wife and two children, all of whom, except for one son are living with HIV/AIDS. He moved to Spain due to the medication crisis.

“My immunity level decreased and I almost lost my life because of a three-month delay, in addition to receiving alternative medication that my immunity could not bear,” he says, adding, “There was no solution but to be tested in Germany, costing 800 Euros.”

In another case, Selim waited six months to obtain medication for his six-year-old son Wael from Imbaba Fever Hospital. Guilt over transmitting the virus to his son and not being able to get him treatment drove Selim to attempt suicide three times. Through one of the HIV Care associations, Selim met people who helped him source the medication from overseas.

Mounir was at the HIV/AIDS department in Imbaba Fever Hospital at the end of 2013, a month and a half before he died. On numerous occasions, he was told, “the boat was late because of customs.” Delays to his medication left him with sores all over his body, leading some doctors to believe he had skin cancer.

UNAIDS in Egypt have been monitoring the delays to medication and alternatives offered by the ministry, according to Khamis. Although, according to a report they issued in 2011, there is no accurate record of those who have drug resistance and don’t respond to medication.

Maha al-Rabat, who served as Minister of Health in Hazem al-Beblawi’s Cabinet, said there is enough medication for those who need it, but that issues arise when people take more than they need due to fears it will run out. This was confirmed by Walid Kamal, Director of the National AIDS Control Program at the Ministry of Health, who said rumors the medication was limited caused people to panic.

Gomana al-Atwany, MENA director of the Global Fund to Fight AIDS, Tuberculosis and Malaria, said the association is trying to communicate with Egyptian authorities and with other partners to solve the medication crisis.

This study was conducted with support from Arab Reporters for Investigative Journalism (ARIJ), under the supervision of Hisham Allam. It was originally published in Arabic on Masrawy in August 2014, and sections of it have been translated and updated by the author for publication with Mada Masr. ​

All info-graphics by Mada Masr.

AD
You Might Have Missed
Mugamma revisited: Reimagining the building and the square
What we talk about when we talk about trees
Where do old lesbians go to die?
Carbon Colonies & A Green New Deal
AD
Alyaa Abu Shahba
1 article on Mada

Topics
Related
HIV/AIDS
Even if we can cure AIDS, do we really want to?
Amani Massoud | When the Egyptian army’s medical team announced it had invented two devices to detect and cure
Complete Cure
Africa has cured AIDS many times before
Mostafa Hussein | The Egyptian military, with their recently announced Complete Cure device, is hardly the first
Adel al-Adawy
Health minister worked on HIV and Hepatitis C cure
Health Minister Adel al-Adawy stated on Sunday that he was part of the military medical team that