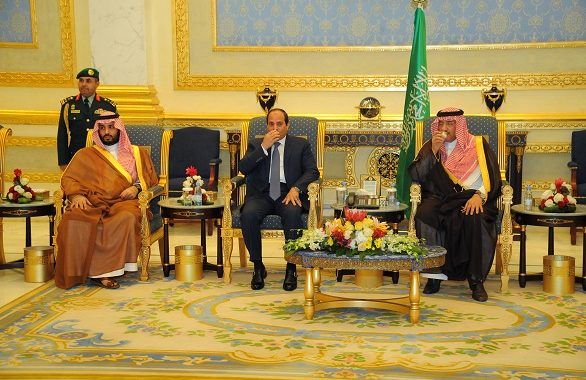 A congratulatory phone call and an unexpected three-hour visit by President Abdel Fattah al-Sisi on Saturday to Saudi Arabia, following the naming of a new crown prince, without the release of any official statements, has caused many to speculate as to the nature of the trip.

Some say the visit was made in order to congratulate the two new heirs to the Saudi royal hierarchy — Prince Mohamed bin Nayef for his appointment as Saudi Arabia’s heir apparent, and Prince Mohamed bin Salman, named deputy crown prince.

Others say the trip had more to do with Yemen and Syria, and some media sources in Saudi Arabia and Qatar speculated that it was to make up for Egypt’s “discourtesy” towards the Kingdom, referring to comments made by Sisi in a leaked recording.

Saudi writer Gamal Khashoqgy told Mada Masr that he doesn’t support any of these speculations, due to the lack of an official statement by Saudi Arabia or Egypt. “I cannot predict the reason — it may be to congratulate the crown prince, or to discuss future or past moves in Syria, or maybe simply routine bilateral relations,” he said.

The leaked recording, referred to by several media sources, was a conversation between Sisi and his office manager Kamel, following the ouster of former President Mohamed Morsi, in which Saudi aides were referred to in an alleged “inappropriate” manner.

Saudi Ambassador to Egypt Ahmed Kattan, in an interview on Gulf television channel Khaleejna, said he had told the Egyptian presidency about the anger in the Kingdom over what they see as serious criticism of their country.

Monarch-affiliated Khashoqgy had stated before that “the Egyptian media is not free and is run by phone,” calling upon the Saudi authorities to end recurrent slurs.

Others have suggested the visit had more to do with the disentitlement of Prince Moqren bin Abdel Aziz, the last remaining heir to King Abdullah, who had an excellent rapport with Egypt’s authorities.

Assistant to the Former Foreign Affairs Minister, Hassan Haridy, told Mada Masr that the visit was necessary to cement Saudi-Egypt relations amid changes to the Saudi hierarchy, but also to discuss non-military solutions in both Syria and Yemen.

The policies of the two countries differ on Syria: While Saudi Arabia sees no future for Bashar al-Assad in Syria, Egypt sees it as a matter to be determined by the Syrian people without military intervention.

Lebanese writer Wissam Matta said, “The visit is a consequence of the latest changes in the Saudi leadership, especially the new faces at the top of the pyramid of power in the Kingdom, given that formal communications between Egypt and Saudi Arabia took place through King Abdullah, then Salman, followed by heir to the throne Prince Moqren. With the arrival of a new generation to the throne, it is normal that the president would re-establish communication, especially given that the two princes are in charge of important regional matters.

The tone of certain Saudi publications towards Egypt has shifted in recent months, so it’s natural that Sisi would want to determine the degree of support for Egypt from Saudi’s new princes, Matta explained.

“It is known that Prince Mohamed bin Salman is the current Saudi military leader in Yemen, which makes the meeting between the two rulers important. I think it is not a coincidence that the visit overlaps with the launching of troops this morning in Aden,” Matta added.

A number of Yemeni media outlets reported the arrival of 50 soldiers from the Arab coalitions in Aden, Yemen, on Sunday morning. The Egyptian government also agreed to extend the period of deployment in Bab al-Mandab and the Red Sea, which some have speculated was a quick follow up to the Saudi visit.

The Egyptian Foreign Affairs Ministry declared on March 26 the joining of Egyptian military troops with a coalition lead by Saudi Arabia — “Decisive Storm” — in Yemen, recently recast as operation “Restoring Hope,” promising troops for another three months, or until the operation ends.

“We cannot overlook the role of Saudi Arabia in supporting armed groups in Syria, especially the Islamic ones, in what is known as Operation Antakya,” Matta urged.

While relations between Egypt and Saudi Arabia have been mutually beneficial following Morsi’s ouster, prominent media figures from both countries have been involved recently in a public spat over policy changes under Salman, who some considered was more concerned with expanding Iranian influence than with the Muslim Brotherhood, as evidenced — some Egyptian media figures say — by improving Saudi-Turkey relations.

AD
You Might Have Missed
Carbon Colonies & A Green New Deal
Mugamma revisited: Reimagining the building and the square
Where do old lesbians go to die?
What we talk about when we talk about trees
AD
Omar Said
82 articles on Mada

Topics
Related
Egypt-Gulf relations
From desert storm to decisive storm
Omar Said | As soon as Egypt announced that its naval and air forces would join the Saudi-led Operation Decisive
Egypt-Yemen relations
Why is Egypt participating in Operation Decisive Storm?
Mostafa Mohie | Egypt’s participation in the military Operation Decisive Storm against the Houthis in Yemen,
democracy
The Gulf and Egypt: Long transitions and Marshall plans
Sultan al-Qassemi | Over the past few years, Egypt’s relations with Saudi Arabia and the United Arab Emirates on one hand,