Do you know which Adel Imam movies are adapted from foreign films?

Actor Adel Imam, a rare artistic phenomenon in the Arab world since the mid-1970s, built his stardom through many films that have become Egyptian cinema classics. It’s not common knowledge though that a good number of them were entirely copied from foreign cinema.

First encountered in the small comic role of Desouki in Abdel Meneim Madbouly and Samir Khafagy’s 1964 play Ana Wa Howa Wa Hiya (Me, He and She,) Imam has since become a major success who comfortably assumed the throne of comedy.

Arguably, the movies in which he has starred form a mirror of Egyptian society, as they’ve covered many topics of interest to Egyptian citizens. Even though his main genre is comedy, he has also excelled in dramatic roles, such as in Mohamed Khan’s Al-Hareef (The Artful, 1983) and Samir Seif’s Al-Ghoul (The Ogre, 1983).

Adaptation from other movies has always been a regular occurrence in cinema. To give just a couple of examples, Martin Brest’s Scent of a Woman (1992) is adapted from the Dino Risi’s Profumo di Dona (1974,) Gene Wilder’s Woman in Red (1984) is copied down to the smallest detail from Yves Robert’s Un Elephant Ca Trompe Enormement (1976,) and Adrian Lyne’s Unfaithful (2002) is a remake of Claude Chabrol’s La Femme Infidèle (1969).

It has to be noted, however, that most of these movies included a reference to the fact that they were inspired by or adapted from other movies – and that this transparency is hard to come by in Egyptian cinema. Adel Imam movies that are adapted from foreign movies have not once, even remotely, mentioned the original work.

Here are some of them, with references to the films they were adapted from. 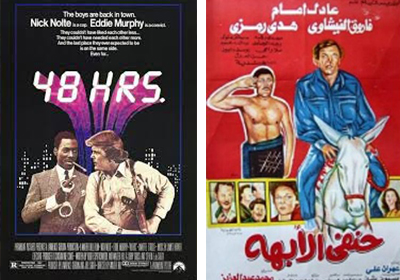 Directed by Mohamed Yasin, this 1990 film was adapted from Walter Hill’s 48 Hours (1982) starring Eddie Murphy and Nick Nolte. Imam plays Murphy’s part and Farouk al-Fishawy plays Nolte’s. Both movies tell the story of a thief who is allowed out of prison for 48 hours due to a deal with a policeman to help arrest a gang of criminals.

Wahda b Wahda (aka Al-Fankoush, or Tit for Tat) – Lover Come Back 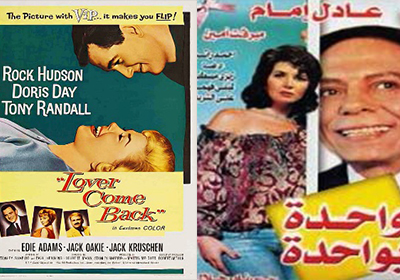 In my opinion Delbert Mann’s Lover Come Back (1961) is one of the funniest movies and its script one of the smartest comedy scripts ever written. It’s about a conflict between an advertising executive and his female counterpart in another company. Its comedy is based on a set of misunderstandings. It stars Doris Day and Rock Hudson and received an Oscar nomination for best original script in 1961.

Tit for Tat (1984) is an exact copy. It stars Mervat Amin and Imam, whose character is named Salah Fouad – the ad executive who does whatever possible to win new campaigns. 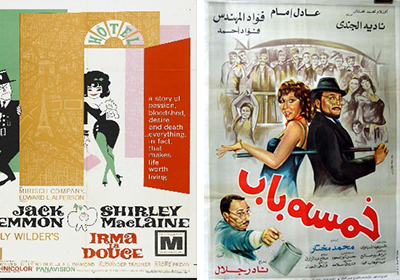 Nader Galal’s Gate 5 (1983) tells the story of policeman Mansour (Imam) and his quest to end corruption in a red-light district during the British mandate. A comedy with a few touches of drama, it’s an exact copy of Billy Wilder’s Irma La Douce (1963,) which stars Jack Lemmon and Shirley Maclaine and is set in a Parisian red-light district.

Gate 5 is important because it brought together stars Fouad Al-Mohandes, Imam and Nadia al-Guindy in one movie. It also became significant for its lengthy battles with the censorship authorities and the Culture Ministry. It had its license revoked and was banned only a few weeks after hitting cinemas.

Shams al-Zanati is adapted from John Sturges’ well-known western The Magnificent Seven (1960,) which was in turn adapted from Akira Kurosawa’s great Seven Samurai (1954). In all three movies, a village is attacked by a gang of outlaws, so its inhabitants seek the help of a group of mercenaries.

The Magnificent Seven brought together a large group of stars including Yul Brynner, Steve McQueen, Robert Vaughn and Charles Bronson. This, in addition to its soundtrack being used for Marlboro TV ads, made the movie a widely known success. 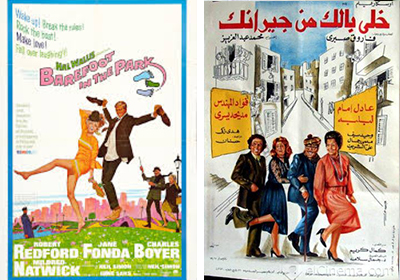 Look Out for your Neighbors (1979) was adapted from Gene Sacks’ Barefoot in the Park (1967) starring Jane Fonda, Robert Redford, Charles Boyer and Mildred Natwick, who was Oscar nominated for best supporting actress. A newly wed couple move into a new apartment and form different relationships with the neighbors, in particular a weirdly behaved middle-aged man.

Imam performs the role of the husband while Lebleba playes his wife. As neighbor Abd al-Salam Al-Damanhour, Fouad al-Mohandes brilliantly copies Boyer’s original performance (even in choice of underwear) down to the last detail.

A Warm Winter Night – It Happened One Night 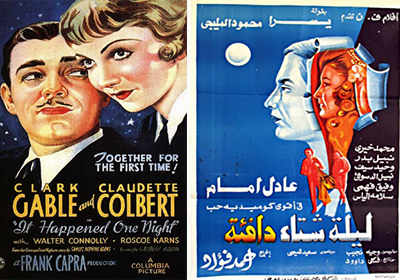 Critics consider Frank Capra’s It Happened one Night (1934,) starring Clark Gable and Claudette Colbert, to have laid the foundations for a type of romantic comedy that later evolved into a distinct movie genre. It won several Oscars and in 1981 Ahmed Fouad directed an exact copy starring Imam, Youssra and Mahmoud al-Meligy.

The plot revolves around a young woman who escapes from her father’s house on learning that he has no intention of going through with her wedding plans and plans to marry her off to someone else. The escape leads to a further romantic entanglement. 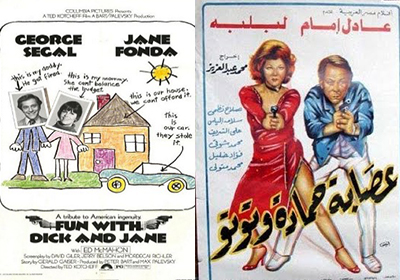 Hamada and Tutu’s Gang (1982) was adapted from Ted Kotcheff’s Fun with Dick and Jane (1977,) starring George Segal and Jane Fonda.

In the remake the comedy revolves around Hamada al-Ziftawy, who finds himself unemployed after getting fired from a tourist company after a disagreement with the owner (in the American film the protagonist is an engineer called Dick Harper.) Hamada then starts to plan thefts and frauds with his wife (Lebleba again) and in time becomes a tycoon. 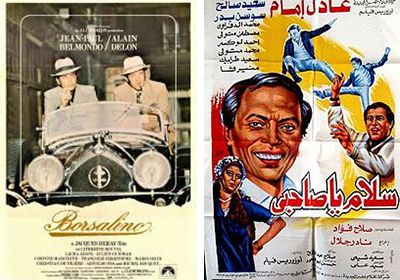 Nader Galal’s Peace, My Friend was produced in 1986. Many critics consider it one of Imam’s most successful movies, not only in terms of viewership but also artistically. Two friends carrying out small business deals have a disagreement with a powerful businessman.

It’s partly based on the French-Italian movie Borsalino (1970) by Jacques Deray and starring, which is considered significant for bringing together actors Jean-Paul Belmondo and Alain Delon. In the Imam vehicle, a big group of actors star alongside him, including Saeed Saleh, Sawsan Badr, Mohamed al-Dafrawy, Ahmed Luxar and Mostafa Metwaly. 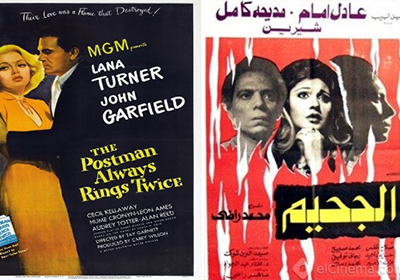 Mohamed Radi’s Hell (1980,) one of Adel Imam’s least-known movies, is adapted from Tay Garnett’s The Postman Always Rings Twice (1946,) which was also remade in 1981 by Bob Rafelson, starring Jack Nicholson and Jessica Lange.

In the three movies, a thief hides from the police in a restaurant, where he gets to know the owner and his wife, who wants to get rid of her husband. A relationship develops between the thief and the wife, who offers to help him kill her husband.

Resala ila al-Wali (A Message to the Governor) – Les Visiteurs 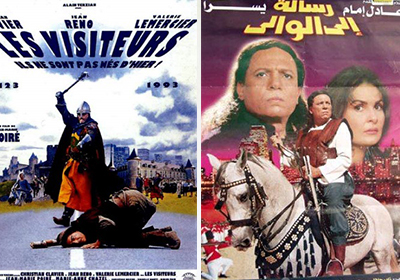 Nader Galal’s A Message to the Governor (1998) starts in the early nineteenth century during Muhammad Ali’s rule. A fighter, Harfoush (Imam) finds himself in the twentieth century after a magician governor sends him there and he starts adventuring in this new world.

With a change of era, it’s adapted from the French movie Les Visiteurs, which uses the twelfth century as the character’s original time. The French movie, by Jean Marie Poiret and starred Christian Clavie and Jean Reno and was a box office hit. 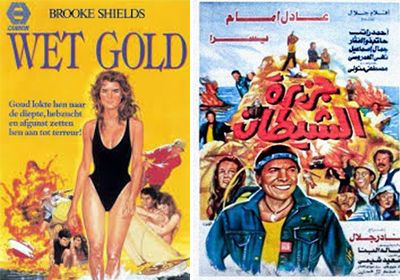 The plot revolves around a group of people trying to find gold known to be on a ship that sank a long time ago. Youssra, Ahmed Rateb, Hatem Zulfikar and Mostafa Metwaly star alongside Adel Imam, and there’s a memorable fight scene in a goldmine.

This article was originally published in Arabic in Raseef22.

AD
You Might Have Missed
Mugamma revisited: Reimagining the building and the square
What we talk about when we talk about trees
Carbon Colonies & A Green New Deal
Where do old lesbians go to die?
AD
Khaled Barrage
1 article on Mada

Topics
Related
Egypt's cinematic gems
Egypt’s cinematic gems: Shams al-Zanati
Hessen Hossam | A strong and catchy name for a strong and catchy character. A wonderful tribute to Kurosawa
cinema
A dialogue with my friend who’s a Waheed Hamed atheist
Andeel | The scarcity of talented writers and the small size of the industry sometimes gives people a bigger status
Adel Imam
Censoring the ship out of it
Andeel | Andeel on what the film censors missed - with a particular focus on Terrorism and Kebab and other films