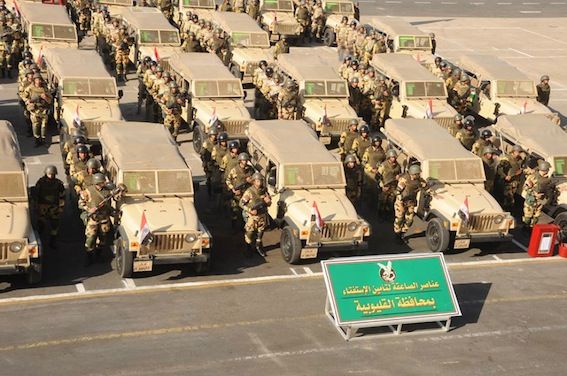 The Arab League Summit held in Sharm El-Sheikh came to an end on Sunday with an undeveloped proposal that stood out from the customary calls for unity and solidarity: the creation of a joint Arab military force.

The details regarding the mechanisms and mission of the proposed initiative would be determined next month in a meeting between chiefs of staff of the member states, Arab League Secretary General Nabil al-Araby said on Sunday.

However, some are already skeptical of the prospects of a joint Arab military force in light of the instability and conflicts in the region.

In the closing statement of the summit, the countries announced that they would keep all options open in their fight against terrorism and violence, “including taking the necessary steps to coordinate efforts and plans to create a joint Arab force to face the challenges ahead of us and to preserve Arab national security and defend our security, our shared future and the aspirations of our people.”

A diplomatic source at the Arab League told Mada Masr that the proposal is a response to the situation in Libya, Yemen and Iraq, saying that it is unlikely for the proposed force to intervene in Syria at this stage.

The idea is not new. A Joint Arab Defense Treaty was signed in 1950, creating a joint defense council that mandates military cooperation for all Arab League members. However, the council was never activated.

Former Deputy Chief of Staff of the Egyptian Armed Forces, Mohamed Ali Bilal, told Mada Masr that the new proposition is a start for the activation of the joint Arab Defense Treaty.

“The forces currently engaged in the Arab coalition in Yemen are the nucleus for the joint forces,” Bilal said, referring to the ongoing military operation in Yemen — dubbed ‘Decisive Storm’ — led by Saudi Arabia with the participation of Egypt, Kuwait, Bahrain, Qatar, the Emirates Jordan, Sudan, Morocco and Pakistan against Houthi fighters in Yemen.

Bilal was the commander of the Egyptian forces that joined international armies in the 1991 Second Gulf War in 1991 — dubbed ‘Desert Storm’ — aimed at liberating Kuwait from Iraqi occupation.

He clarified that the Arab League initiative would consist of a leadership quarter and continuous joint training sessions, while the forces would remain in their respective countries and convene when necessary.

He added that other than Arab countries already involved in Yemen, it would be unlikely for the remaining Arab League members to join the joint force. Some countries are too unstable to join such as Iraq, Syria and Libya and others are not influential in terms of military capability, he argued.

Algiers had reservations over the decision. Foreign Minister Ramtane Lamamra told Youm7 that his country did not object to the idea but that the logistical, political and legal aspects would also have to be considered.

Bilal said that it would be difficult for Algiers and Morocco to participate in a joint military force because of their ongoing conflict over the Western Desert.

However, he said less central conflicts could be put aside, as with the case of Egypt and Qatar, both currently taking part in the joint operation in Yemen following two years of turbulent relations.

Others find the conflicts within the region a serious hurdle to military cooperation.

Former Foreign Ministry deputy Hany Khallaf said in media statements that the proposition had not been fully developed to cope with the differences in vision between Arab countries around important issues.

He also said that its mission as it stands needed to be more defined.

“It seems that no one focused on the importance of differentiating between deterioration of security in an Arab country and threat to national security — and if the joint force is tasked with fighting terrorism, there isn’t one definition for it, and no guide to differentiate it from popular protests or holding weapons,” he said in statements to the news agency Sputnik.

He also alluded to a possible contradiction between the initiative and one of the Arab League’s main principles,  which prohibits intervention in the internal affairs of the countries, or working on changing their ruling system.

Historian Sherif Younis said that the proposition is still too vague to develop a position towards, however he had some general concerns.

“The states in the Arab world are politically fragile. There are no guarantees that the participants wouldn’t be used in political conflicts or forced into military coups,” he said, adding that a defined and independent structure would be necessary to ensure that the joint force would not be used against the weaker side in regional conflicts.

AD
You Might Have Missed
Mugamma revisited: Reimagining the building and the square
What we talk about when we talk about trees
Carbon Colonies & A Green New Deal
Where do old lesbians go to die?
AD
Heba Afify
117 articles on Mada