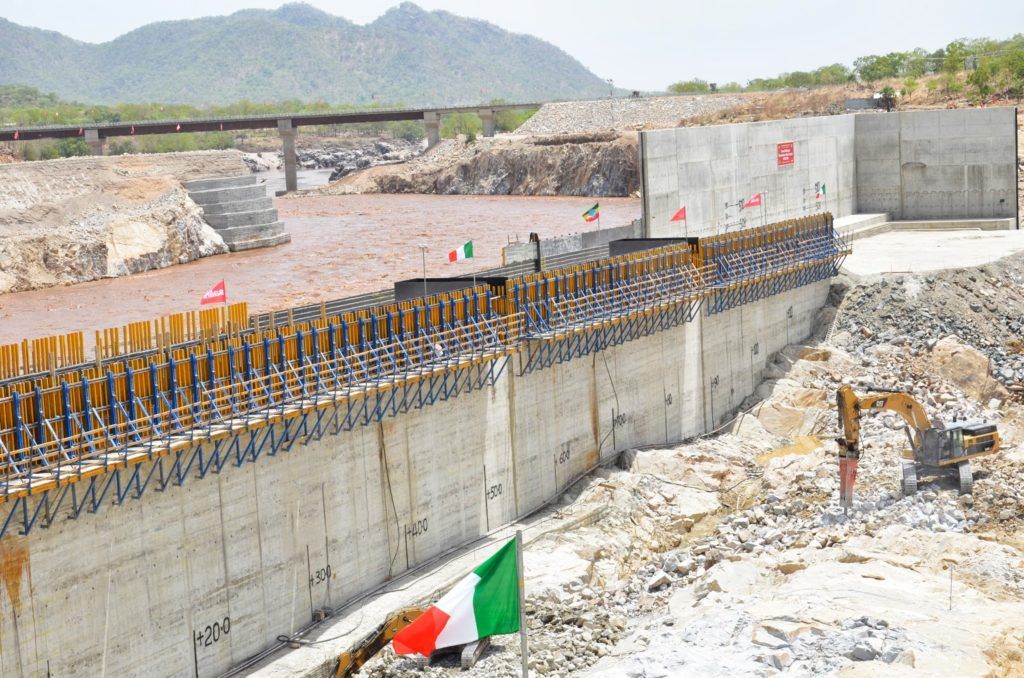 Presidential Spokesperson Alaa Youssef told reporters on Monday night that the declaration would preserve Egypt’s rights to Nile water in accordance with international law. The official Middle East News Agency (MENA) reported that Sisi and Teshome are discussing details of the declaration and bilateral ties between the two countries.

Youssef added that the High Committee on Nile Water, which is comprised of concerned ministers and experts, studied the declaration, and approved it on Monday prior to the signing.

The declaration listed ten major points, including cooperation in regards to the water needs for both Egypt and Sudan on one side, and Ethiopia on the other; the aim of the GERD, which is sustainable development and regional economic integration; an obligation not to cause any harm or damage to any of the signatories; just and fair use of Nile water; and trust-building through giving Egypt and Sudan priority to electricity generated by the dam.

The principles also included obliging the three countries to openly exchange knowledge and information required by experts to evaluate the building of the dam, a commitment from Ethiopia to international safety measures while building the dam, a reiteration of equal state sovereignty for signatories, and a pledge to peaceful conflict-resolution should future issues arise during the construction process.

The declaration did not include any specific technical guarantees of Egypt’s rights to Nile water, and did not stipulate any commitment on the part of Ethiopia not to jeopardize Egypt and Sudan’s shares of Nile water following the completion of the dam. Observers believe that the declaration carries political messages more than anything else.

Egypt’s political rhetoric toward its conflict over Nile water with Ethiopia traditionally stemmed from its adamant insistence on the rights guaranteed to Egypt through the 1939 treaty preventing Nile basin countries from moving forward with any Nile-related projects without Egypt’s permission. Ethiopia has historically rejected this treaty, as it was enforced by British occupation of Egypt and other Nile basin countries. Egypt also enforced its historical control over the Nile water through a bilateral agreement with Sudan in 1959 to divide Nile water between the two states, with Egypt’s share amounting to 75 percent of Nile water.

Former founder of the Initiative of the Nile Basin in Egypt, Wael Roushdy Soliman, expressed his concern over the lack of clarity in the declaration, which did not clearly oblige Ethiopia to commit to the 1939 or 1959 treaties. He referred to this ambiguity as a very “dangerous sign” as part of his remarks on Facebook.

“The current declaration lacks substance,” he stated, explaining that the declaration did not explain any techniques for conflict resolution in detail, and failed to mention any plans for other developmental projects. The declaration, according to him, is very focused on the GERD project, and uses vague terms that are open to different interpretations by the parties concerned.

“We know nothing about what was agreed upon behind closed doors. We did not take anything from Ethiopia, and it seems that we gave up something for Sudan and Ethiopia. I hope I’m mistaken,” he said.

However, supporters of Egypt’s move to sign the declaration propose that it is an important step to shift Egypt’s policy of arrogance towards African countries in general and Ethiopia in specific. Throughout history, critics say that Egypt imposed a power relationship on Ethiopia where it claimed absolute right over Nile water.

According to a study written by Research Director at the International Institute for Public Diplomacy Ahmed Abizaid, Egypt’s policies toward Ethiopia throughout history led directly to the current status quo. Abizaid referred to late President Gamal Abdel Nasser’s policies after the signing of the 1959 treaty with Sudan without Ethiopia’s consent. Nasser also encouraged Eritrean rebel movements against Ethiopia during his presidency.

Egypt’s negligent foreign policy toward Ethiopia also continued during the regime of late President Anwar Sadat (who focused on the peace treaty with Israel rather than ties with African states) and did not change under Mubarak’s presidency.

A shift in rhetoric

Signing the declaration may be a sign of a strong shift in Egypt’s attitude toward Ethiopia. Following the revolution in 2011, a delegation of public figures visited Ethiopia in a sign of goodwill, and the relationship between the two countries was expected to improve with the election of former Islamist President Mohamed Morsi. But a meeting between Morsi and Egyptian public figures, where politicians called for military intervention in Ethiopia, worsened the situation once more.

In his speech following the signing of the declaration, Sisi said, “We can cooperate, and we can also harm each other for many years. But we choose cooperation and development.” His statements were well-received by audience members.

Abizaid told Mada Masr that Egypt’s shifting policy toward Ethiopia could be a realistic understanding of Egypt’s current regional position. For him, Egypt is “re-reading” its situation in light of the challenges it faces internally in terms of security and a deteriorating economy. “It is a realistic move that does not involve the risk of resorting to military action. In negotiations, Egypt is not governed by what it wants, but with what Egypt has. In reality, Egypt is unable to prevent Ethiopia from building the dam,” he explained.