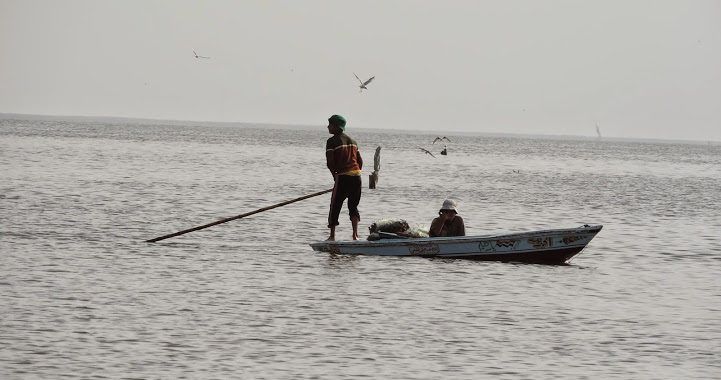 Sheikh Hamada sits by the lake to eat his lunch and recounts times gone by. “In the old days, the water was so clear,” he remembers. “You could throw something in there and see it under the water. Now it’s awful.”

Lake Borolos lies in the north of the Egyptian Delta, in the province of Kafr al-Sheikh, connected to the Nile through the Brembal Canal and to the Mediterranean through the Bughaz of Lake Borolos. At 420 square kilometres, it is the second largest of the country’s natural lakes and used to produce a third of all fish produce in Egypt.

Around 240,000 fishermen work on the lake, most have inherited the profession from their grandparents. But the trade is not being easily passed on through generations. 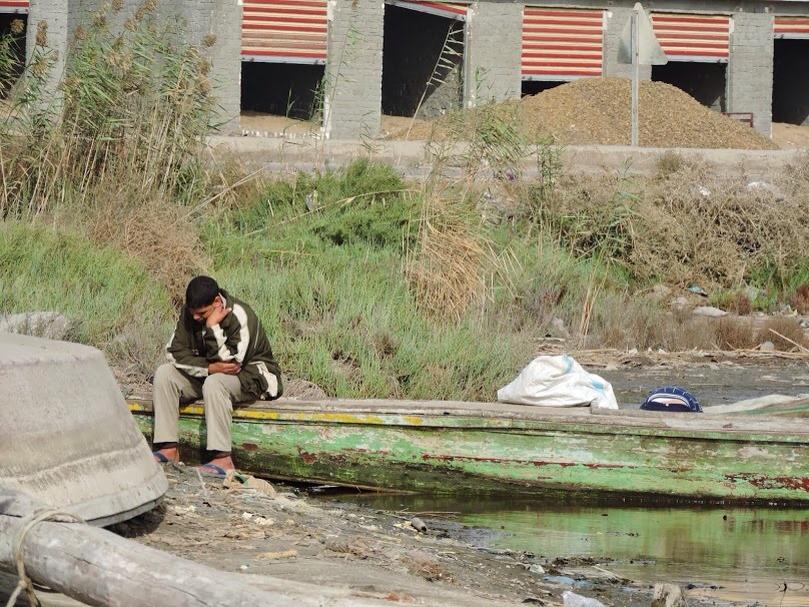 Hajj Ali comes in to the modest coffee shop in Borolos and exchanges quick greetings with his acquaintances. He doesn’t know exactly how old he is, but knows he is over 90. As he sips his tea, he recounts old memories. “This coffee shop and this entire street were part of the lake. Where it narrowed, there were once farms and houses on it.”

He remembers working with his father on the lake as a child, and recalls the days when he would throw his net into the lake and pull it out the next day full of fish. He hasn’t fished on the lake in decades due to old age, but his sons and grandsons, who inherited the profession, have not fished on the lake for years either. Some have taken to fishing in the sea and others have travelled overseas.

One of Ali’s sons drowned while attempting to leave the country illegally. He left behind four grandsons that Ali raises with his granddaughters from another daughter who also died. 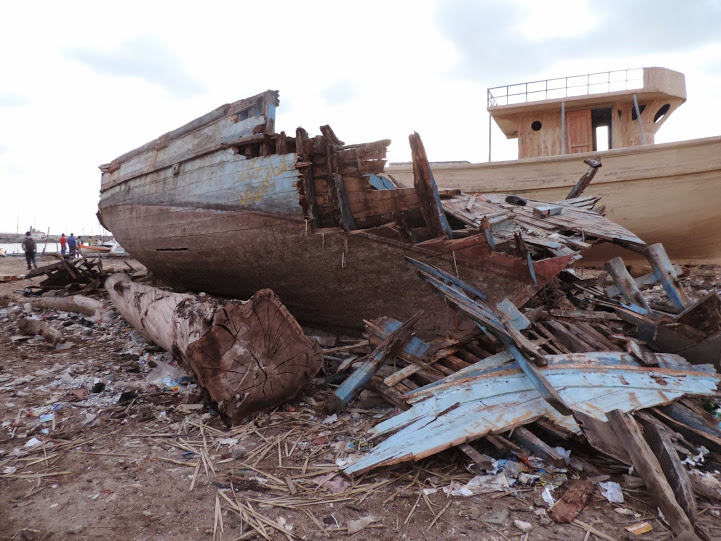 Over the last 20 years, the lake has suffered from several forms of pollution, exacerbated by the control of big fisheries and the neglect of officials.

Small-scale fishermen suffer from the mafia of larger-scale fisheries, and motorboats that violate the fishing code, which contribute to pollution and the destruction of the lake.

“I have been away for eight years. I travel to Saudi Arabia because the lake is not the same as it once was,” Hamada says, adding that making a living from the lake is not possible for him any more. He suggests the root of the problem is the basins, which direct water away from the lake to nearby fisheries.

Hamada expresses his regret at seeing the lake he has worked on since childhood deteriorate, to the extent that if he casts his net, he may lose it or find it torn. He explains this is no accident. “Thieves of the fisheries,” as they are referred to locally, tear the nets to send a message that the area is under their authority.

The fisheries’ mafia, who shoot if you get too close, dominates a group of islands on Lake Borolos that are good for fishing, Hamada says. They established large tanks to catch fish in bulk, without concern for the ecosystem and leaving nothing for the small-scale fishermen.

“Moving along the road to Kafr al-Sheikh and then Edko, you pass by so many basins,” Hamada describes, adding that former Governor of Kafr al-Sheikh, Zaky Abdeen, set up fisheries in Yadd Bahary on the road to Alexandria and sold them to the largest traders.

Hamada is not the only one angry at the domination of the mafia and the increasing presence of fish farms on the lake.

Saad Abd al-Aziz was a fisherman years ago, but he stopped working after his nets were stolen by the fishery thieves a number of times. He simply couldn’t afford to keep replacing his nets. “We don’t eat from the fisheries, even if their fish costs us a pound,” he says, explaining that the fish are contaminated from pollution and have caused several residents to get sick.

Abd al-Aziz says the lake is polluted as a result of stagnation, because the water doesn’t reach it anymore. There used to be openings between the islands through which water circulated, he explains. The lake had 10 of these openings, such as Al-Gharib, Muslim, Zanakaha, And Al-A’ama, but fishermen who have taken control of them illegally and set up farms have obstructed them all. 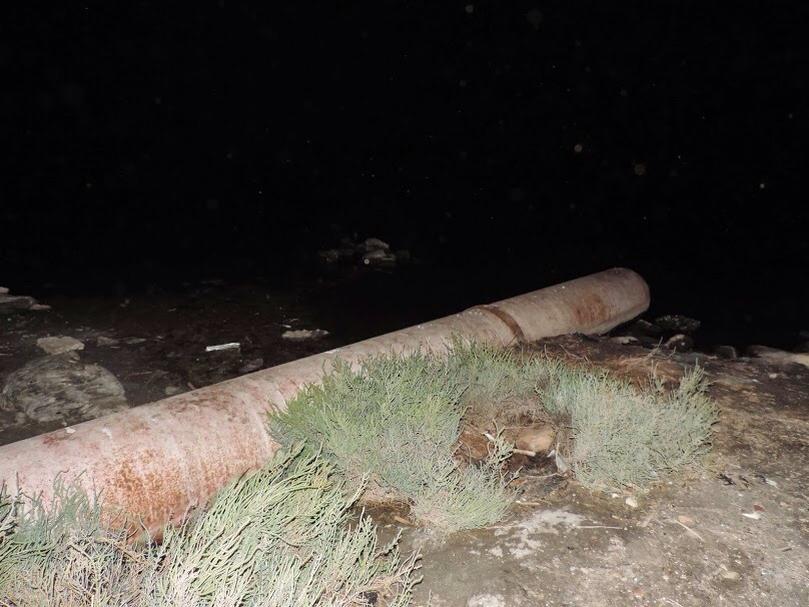 The Water Surface Police aren’t of much use, Abd al-Aziz says. They only work during the daytime, from 6 am to 6 pm. Violations often start as soon as the police end their working day, and they refuse to listen to requests by local fishermen to extend their hours.

Beside stagnation, there is an issue of sewage drainage. The sewage drainage center is a well-known site in the city of Borg al-Borolos. If you ask any of its inhabitants for directions, they always give them in relation to the sewage center.

In addition to sewage drainage from Gharbiya, the lake also suffers from artificial drainage from a center in the Kotnsher, which is full of chemical and industrial waste from factories in Mahalla and Kafr al-Zayat.

Near the coffee shop, Abdallah Shams works as a driver, transporting passengers in a small pick-up truck. “Drainage from the fisheries is the main reason for the loss of hope in the lake,” he says. “In the old days there were so many different kinds of fish. Now you only have two … Bolti and Tubar.”

Vice President of Balteem’s City Council, Essam al-Tobgy, sits behind a modest desk, on which there is a calendar that hasn’t been changed in months. “All of these problems that newspapers are writing about existed four years ago. There is no pollution in the lake now.” Tobgy says confidently.

Head fisherman Mohamed al-Hamrawy sits in a small private office underneath a large photo of President Abdel Fattah al-Sisi. “To start with, I would like to thank the president for his efforts in restoring the lake,” he says.

Hamrawy explains that the lake has been neglected and that it suffers from many issues, including motorboats that operate in violation of Law 123 (1983). He says the last security campaign for the Water Surface Police didn’t involve the fisheries. Hamrawy says he tried to coordinate previously with the engineer in charge of the center for sanitary sewage draining, but he disappeared without a trace.

Former governor of Kafr al-Sheikh, Mohamed Ezzat Agwa, has conducted several visits to Borolos to announce that the lake benefits from a clean environment. This is in stark contrast to the annual report issued by the Ministry of Environmental Affairs in 2013, which detailed increased levels of pollution in the lake.

There was also a marked decrease in the number of phytoplankton, which is the main source of nutrition for organisms in the lake. 148 types of zooplankton have been recorded in the lake, belonging to 58 genera. This is less than the numbers recorded last year, when 155 different kinds of zooplankton and 57 genera were recorded, and in 2010, 195 kinds and 73 genera. The pollution has also affected plant diversity, according to the report.

Major Shaker al-Balasy, the only officer in the office of water surfaces in Baltim, says that the water surfaces campaign targeted the setting up of fisheries and motorboat violations.

The campaign, which started in March, has resulted in the return of 30,000 feddans where encroachment has taken place. They have now become areas for free fishing. There remains around 40,000 feddans that are still under encroachment at the northern end of the lake.

But the campaign also has its victims.

He stood alone on one side of the lake. “They took my boat from me. I want my voice to reach the government. The lake is only for the big shots. But those who are weak can barely even live,” screams Eid Hassab al-Naby, the owner of a motorboat that was one of 70 confiscated by the authorities in a security campaign.

“So they took the motorboats that kept the households of tens of families going, but do nothing about the big motorboats that belong to the traders and the mafia of the fisheries we reported?” he asks.

Eid, who has worked on the lake for 30 years, dropped out of preparatory school to work with his father. He now works for a daily wage, like many of those whose boats have been confiscated by the authorities. He says he tried to talk to the governor, but they won’t let him in. “Security dismisses me at the door, even though the governor states in the media that his office is open from 8 am to 6 pm,” he says.

Eid had to sell his wife’s gold jewellery to buy new fishing nets. He says the head fisherman colluded with security to confiscate the boats, suggesting he is affiliated with the Muslim Brotherhood and was trying to create problems for Sisi. However, Eid explains that the fishermen are patriotic and have not paid any attention to this conspiracy.

The contact for the program on the website is out of service, so is that of the office listed in the city of Baltim, which hasn’t been opened for months. The big building, which has many doors, is completely closed at 10 am. Not a single employee is present and stagnant water surrounds it.

The town’s inhabitants know most of those working on the program, but when you ask them about it, they say “A center for environmental affairs? There is no such thing, there is no environment here any more.”

AD
You Might Have Missed
Carbon Colonies & A Green New Deal
Mugamma revisited: Reimagining the building and the square
What we talk about when we talk about trees
Where do old lesbians go to die?
AD
Nada Arafat
13 articles on Mada

Topics
Related
environment
A new minister, a different environment
Isabel Esterman | For a few months in the fall and spring, it seemed like Laila Iskandar, then minister of environment,
Environment ministry
Advice from green youths to Egypt’s new environment minister
Egypt’s finest young environmentalists convened downtown to attend the second Iftar of Icecairo, an