Ahmed Fouad is an employee at the Health Ministry in Alexandria. He’s also one of the roughly 75,000 dwarfs* currently living in Egypt — and his job makes him a minority in this already marginalized group, which is largely barred from the workplace due to infrastructural discrimination.

In addition to endemic social prejudice and ridicule, many dwarfs say government neglect has led to widespread problems for their community, from pervasive unemployment to a lack of affordable healthcare. Fed up with the status quo, in recent years they’ve begun to organize to fight back against a host of socio-economic obstacles.

The Association for the Welfare of Dwarfs in Alexandria (AWDA) officially launched in December 2012 as a venue for social, cultural and sports events open to all Egyptian people of short-stature. Today, the association boasts a general assembly of around 120 members, with smaller branches in Cairo and the Suez Canal cities of Port Said and Ismailia. 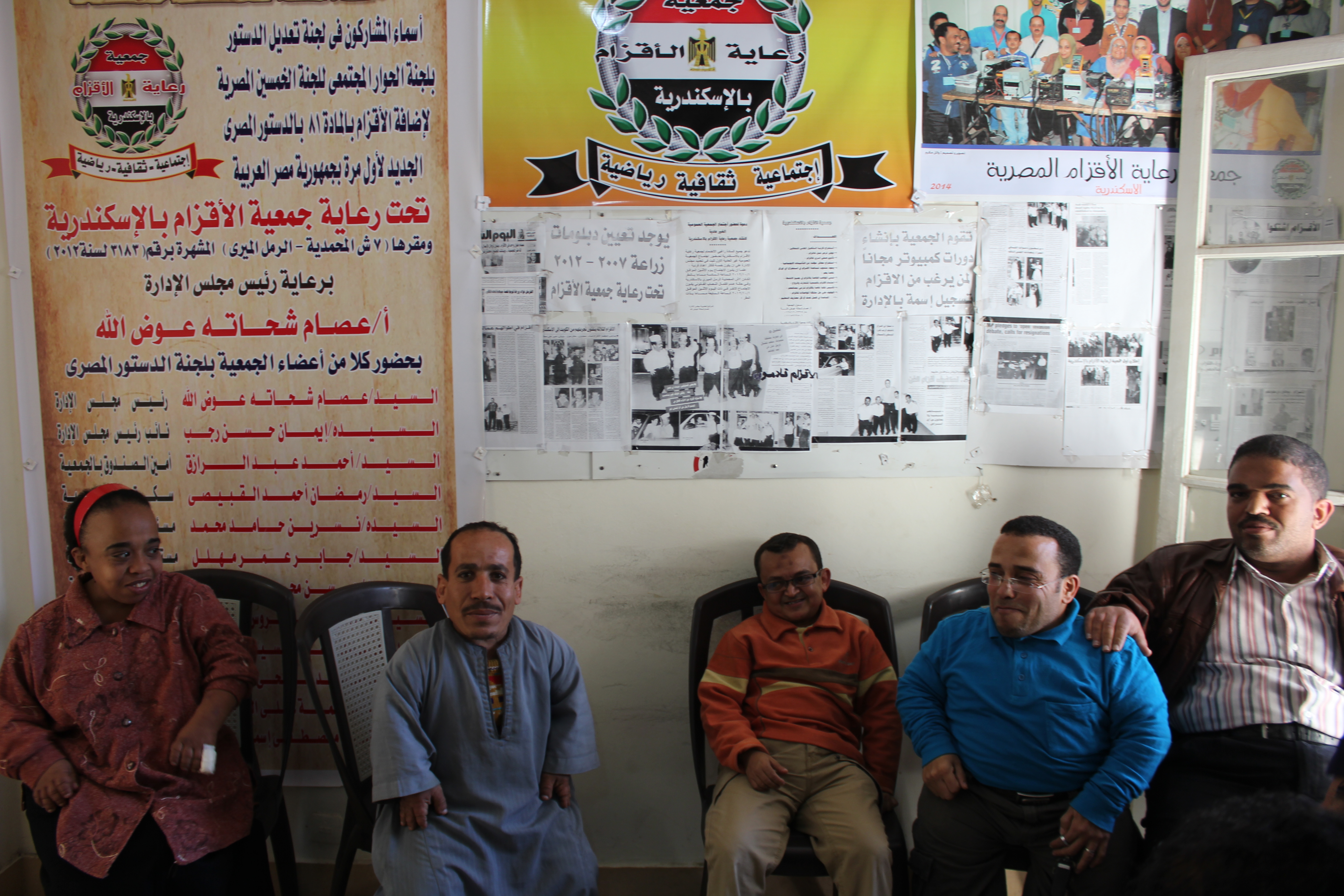 Shortly thereafter, in March 2014, the Independent Trade Union of Dwarfs (ITUD) was founded and officially registered with the Ministry of Manpower, becoming the Arab world’s first labor organization dedicated to dwarfs.

Also headquartered in Alexandria, so far the ITUD is markedly smaller, with only 50 members and one committee. The union is dedicated to helping its members find employment by offering vocational training programs and professional skills workshops, and also advocates for dwarfs in cases of workplace discrimination and other labor-related issues.

Although dwarfs are still essentially cut off from state welfare services, these organizations — particularly AWDA — have recently made some significant strides.

The association won an unprecedented victory last year when dwarfs were recognized in a constitutional amendment including them in employment quotas. The amendment also granted special consideration to the community in terms of their socio-economic rights.

Previous constitutions provided these rights to citizens with disabilities, but never contained provisions specifically for dwarfs. Employers would thus often exclude people of short stature from such quotas, on the basis that they were not mentally or physically disabled.

By international standards, adults who measure 147 cm or less in height are legally recognized as dwarfs. Depending on the medical cause of the condition, some of them can suffer from serious health complications, but most live long, healthy lives and do not consider themselves disabled.

Thanks to AWDA’s advocacy, the 2014 Constitution now includes Article 81, which stipulates, “The state is committed to ensuring the rights of persons with disabilities and dwarfs in terms of healthcare, economic and social rights, in the fields of culture, entertainment, sports and education. Along with the provision of job opportunities for them, the allocation of employment quotas, the creation of public facilities and an environment whereby they may exercise all their political rights so as to facilitate their integration amongst other citizens — in keeping with the principles of equity, justice and equal opportunities.” A five percent employment quota is specifically stipulated for public sector enterprises, in accordance with the law.

Essam Shehat and his wife Nesreen Hamed were the driving force behind the amendment. Tireless activists for the dwarf community since the 1980s, and co-founders of AWDA, the couple successfully lobbied lawyers and other Constituent Assembly members to include these provisions during the constitution drafting process.

Barred from the workforce

But despite the gains they achieved on paper, so far Article 81 has largely been unenforced, explains Shehata, who serves as director of AWDA as well as president of the ITUD.

“Neither the state nor private businessmen are standing with us in terms of the providing employment opportunities for dwarfs,” Shehata says. Political parties have consistently ignored this and other rights violations against this community, he claims.

According to Shehata, there is no official national census data or other records indicating the exact number of dwarfs living in Egypt. But rough estimates put the number at 75,000, with as many as 400,000 Egyptian families including at least one person of short-stature.

Unemployment or precarious employment is often cited as the most pernicious problem facing the community.

Hamed points out that AWDA’s professional skills workshops — such as courses in cellphone repairs and maintenance — have “proven that dwarfs are mentally and physically capable of performing technical work exactly like fully grown people.”

But nonetheless, “from childhood, dwarfs are ridiculed at school, then in adulthood suffer discrimination in employment,” she asserts.

Some AWDA members have successfully maintained steady jobs in the public sector, working as customs officials, employees at the Alexandria Port Authority and in the healthcare sector. But these cases are the exception, not the rule.

Sami Ramsis has been out of work for three years. “I’ve been repeatedly seeking employment at the Ministry of Manpower’s bureaus,” he says. “But the employees there ridicule me, saying normal people can’t even find employment, let alone dwarfs.”

Ramsis feels like he’s stuck in a cycle of social exclusion. “Since I can’t find a job, I can’t buy or rent an apartment for myself,” he continues. “Since I don’t have any steady income or an apartment, I can’t get married or have a family of my own.”

And Health Ministry employee Ahmed Fouad points out that even when dwarfs are offered work, it often amounts to little more than a charitable handout.

“We would often find that employers do recognize the five percent quota for disabled persons. But instead of providing such people with jobs in their workplaces, they are paid to stay at home,” he alleges, lambasting the practice as a derogatory and unsustainable act of charity.

“We’re not asking for charity,” he argues. “We are asking for our rights and for equal opportunities in our country.”

And even if a dwarf does get a job, he or she is then confronted with the problem of how to get there — many report that most forms of public transportation are inaccessible.

“I have no problem riding the tram, but some buses and microbuses are very difficult to climb aboard. They are not easily accessible to people of our height,” AWDA member Qadria Mahrous says.

Other association members say they hope government officials or private donors will help to subsidize the purchase of cars or motorcycles that are modified for their height, so as to increase their mobility and, by extension, their employability.

AWDA may still have a long way to go when it comes to tackling infrastructural issues — but it’s been enormously successful in creating a safe space for community building, and offering the services and activities that dwarfs can’t find elsewhere.

The association offers some medical services to its members, who often struggle with limited access to healthcare. For instance, Hamed says they provide human growth hormone injections for children whose short stature is caused by hormonal imbalances or nutritional deficiencies.

In addition to healthcare assistance, advocating for children is another major focus.

“We’ve been calling on the Ministry of Education to raise awareness, to increase tolerance and acceptance of dwarf children in schools,” Hamed explains. “We want to end the physical and verbal bullying of dwarf students by their classmates.”

She hopes that increased efforts on the part of education officials will help to foster a sense of social integration and belonging that would ultimately lead to greater success later in life.

And aside from these crucial services, the social experience the association provides makes a major impact on its members’ lives.

“I enjoy the sense of community, and the company of friends I’ve made here. We can relate to each other’s daily grievances,” says Mahrous.

The association convenes for its general assembly meetings on the first Friday of every month, and also organizes several other social and cultural activities. Mahrous says she particularly enjoys the group’s trips and excursions, including pilgrimages to Mecca and Medina.

These activities have helped to build a close, tight-knit community — Hamed proudly notes that at least six couples met and got married through the association.

Shehata is currently working to establish a National Day for Egyptian Dwarfs on March 27 to raise awareness regarding the community, and its needs and aspirations. AWDA is preparing events including football matches, dance and music performances, competitions and cultural exhibitions.

At the association’s headquarters, five dwarfs are rehearsing an Upper Egyptian stick dance and a Nubian jig in traditional costumes. They smile joyfully for their photo shoot, and say they’re excited to perform in front of an audience. They even hope to perform professionally in the future. 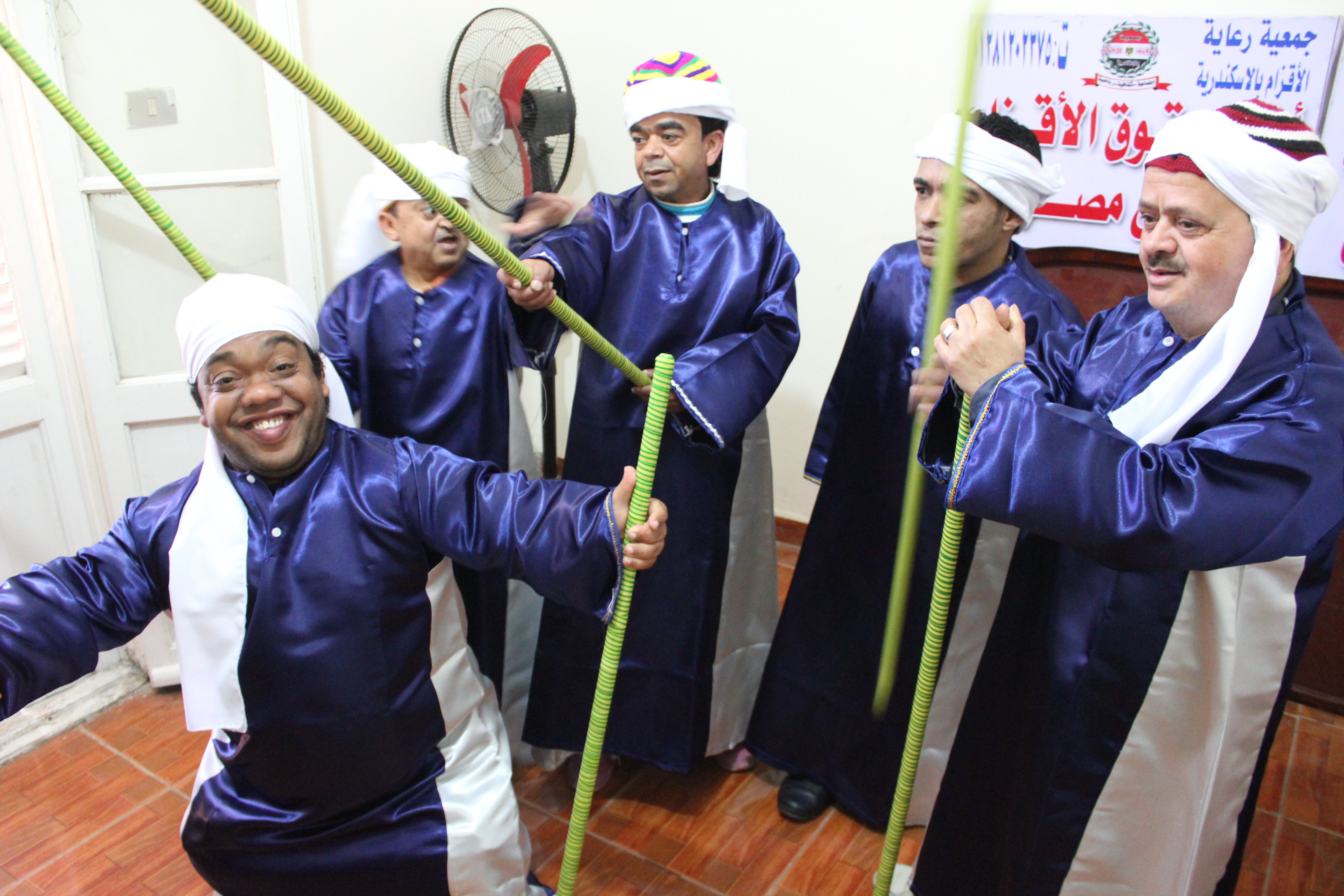 But the rehearsals might be in vain if Shehata doesn’t secure the funds he needs to showcase the performance.

“If we don’t have sponsors to promote or financially assist us with these events, then we won’t be able to be able to go ahead with them,” he explains. “Our plans for this National Day of Egyptian Dwarfs may have to be put on hold.” 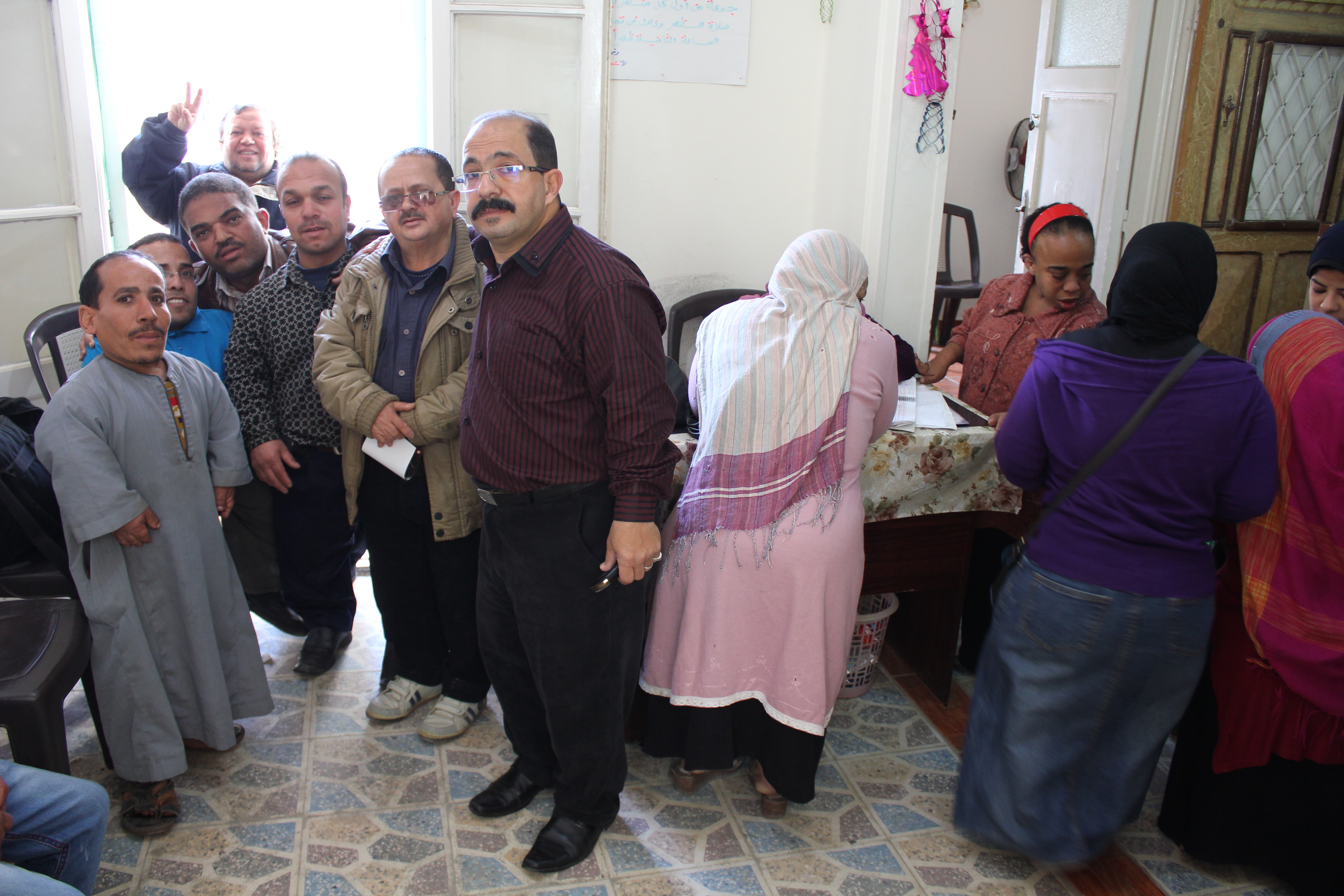 While the Association for the Welfare of Dwarfs in Alexandria does not have an official webpage, information on the community in Egypt can be found on the Dwarfs Dot Com Facebook page.

*In interviews with Mada Masr, members of the community referred to themselves as “qezm/aqzam,” literally “dwarf/dwarfs.” This term has been contested globally, with some preferring to use “people of short-stature” or “little people,” as there is no agreement on whether or not dwarfism is a disability.

AD
You Might Have Missed
Carbon Colonies & A Green New Deal
Mugamma revisited: Reimagining the building and the square
What we talk about when we talk about trees
Where do old lesbians go to die?
AD
Jano Charbel
78 articles on Mada