Update: As economic summit draws to a close, deals said to reach $38.2 billion
By
Mada Masr 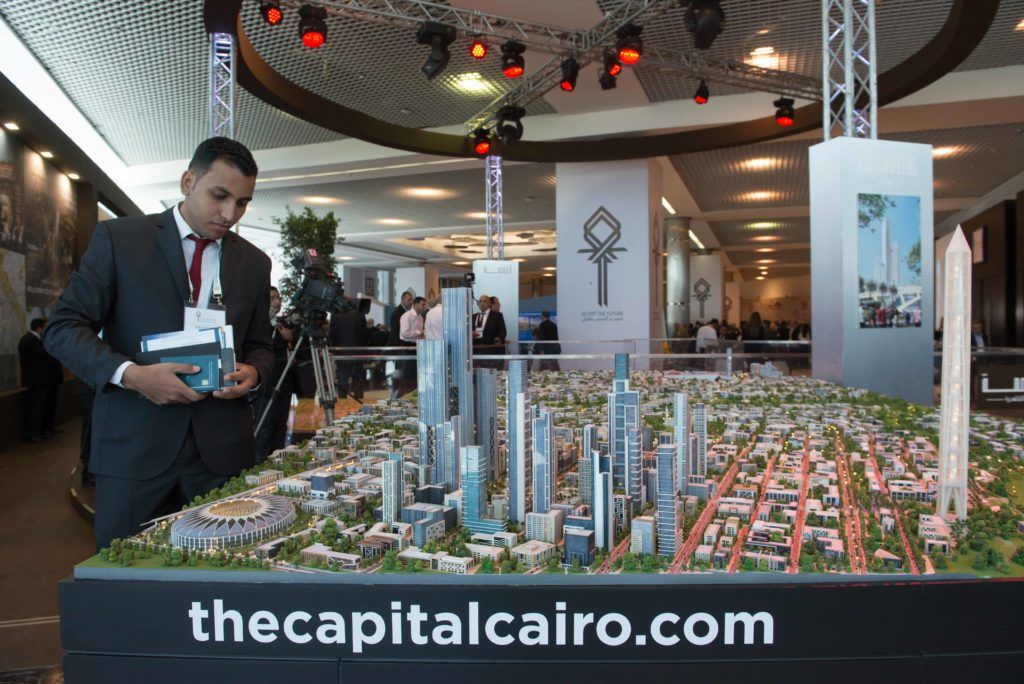 While day one of the Egypt Economic Development Conference (EEDC) showed how much Gulf backers are willing to commit to support Egypt and its current leadership, the conference is meant to prove that Egypt can now draw the private sector interest and money it so direly needs into the dozens of projects the government has spent months preparing.

On Friday, Gulf states pledged a cumulative US$12.5 billion of investments, aid and central bank deposits to Egypt, but going forward the focus will be on the private sector investments the government can manage to sign on.

Investment Minister Ashraf Salman said Sunday that Egypt has signed investment deals worth $38.2 billion, and memoranda of understanding for potential deals worth another $92 billion.

It is unclear whether the Investment Minister’s figure includes the largest project, presented at the summit, a development of what’s being called the new Capital Cairo, a massive and highly ambitious project to create a new administrative, business and residential center with high rises that look very much like Dubai. It is expected to cost around US$45 billion.

While visiting a model layout of Capital Cairo on Saturday, UAE’s Mohammed bin Rashid al-Maktoum said it should take about 10 years to complete, to which Sisi responded, “No, not 10 years, not even seven. They will be five years, God willing, even though five years is too much.” According to Al-Ahram, the final agreement was based on a five-year completion target.

Egypt’s Investment Minister Ashraf Salman had said he expected to see between US$15-20 billion in agreements signed over the three days of the conference in Sharm el-Sheikh, namely in the energy, infrastructure and agriculture sectors. Egypt also said it needs to raise $60 billion in foreign direct investment (FDI) over the next five years.

By midday on Saturday, the state-owned Al-Ahram portal said that the total investments promised to Egypt had reached US$45 billion, with a heavy focus in the energy and real estate sectors.

One of the first major announcements at EEDC came from US-based General Electric (GE,) who said on Friday that it will invest $200 million in a manufacturing and training facility in the planned economic zone around the Suez Canal mega-scale project. It has also just delivered a shipment of gas turbines to Egypt as part of a $1.9 billion deal to boost power capacity, Reuters reported.

GE said it had delivered 34 out of 46 turbines as part of a project to provide 2.6 gigawatts of power to the grid by May 2015, Reuters reported, citing a company statement. The company added that its interest in the Suez Canal development project will center around power generation, renewables, water, oil and gas, aviation and rail transport.

There were a series of announcements from private investors pledging money to Egypt on Saturday.

Egypt’s Housing Minister Mostafa Madbuly signed a memorandum of understanding (MOU) with the Emirati businessman Mohamed Alabbar to develop the South Marina project on the North Coast at a cost of $3 billion. The project is supposed to create 14,000 jobs. It comes as part of the government’s plans to further develop the Mediterranean coastline with touristic projects.

British energy company BG will invest $4 billion in Egypt over the next two years, Sami Iskander, the company’s chief operating officer said, adding that the deal will be signed with the government on Sunday.

Also in the gas field, Samsung’s CEO said the company is planning new projects in Egypt at a total investment of around $1 billion. According to the Aswat Masreya website, the projects include a gas exploration vessel as well as a gas liquefaction station.

Salman signed an MOU with Majid Al Futtaim group to invest more than $1 billion in eight projects, four of which will be in new cities and another four in the greater Cairo area. This brings the group’s total investments in Egypt to more than $3 billion.

Madbuly, penned a deal with Aabar Investments, which recently acquired a 5.1 percent stake in Egyptian real estate developer Palm Hills, to build a project in October 6 city over an area of 10,000 feddans.

Electricity Minister Mohamed Shaker said on the sidelines of the EEDC that Egypt will sign a MOU with Saudi’s ACWA Power to build a power plant in the Red Sea, an investment worth $3 billion, and is also in partnership with UAE’s Masdar. ACWA also plans to build a coal power plant at an investment cost of $7 billion and production capacity of 4,000 megawatts (MW).

Dana Gas outlined plans to invest $350 million over the next 30 months and expects to receive outstanding arrears of $185 million from the government by the end of 2016, Reuters reported. The investments include drilling nearly 40 new development wells, building new pipelines and debottlenecking an existing plant, Reuters explained.

According to state news agency MENA, Beyti, a milk and juice producer owned by Saudi’s Al-Marai and PepsiCo, will invest $525 million to build a new juice factory in Beheira governorate.

Egypt’s transport ministry signed a deal with Dubai Ports International to build a station for pouring liquid in Ain Sokhna at a cost of $415 million, MENA reported. The station will be built on an area of 400,000 square meters and will receive liquid gas ships.

Also in the transportation sector, China’s railway authority will build, manage, finance and operate an electric train in Alexandria’s Abu Qir, at a cost of $700 million. The transport minister, Hany Dahy, oversaw the signing of the agreement between Egypt’s railway authority and China’s. The train will have the capacity to transport 1.5 million passengers monthly over the 22 kilometer route divided over 16 stations.

PepsiCo said it will expand its production in Egypt this year with investments worth $500 million. Ahmed al-Sheikh, the company’s business unit manager for North East Africa, told Reuters that PepsiCo recorded sales of $1.2 billion in 2014.

Eni, a major Italian oil company, signed initial agreements worth $5 billion in investments over the coming four to five years. Oil Minister Sherif Ismail said the investment in several concessions in the Mediterranean, the Western Desert, the Nile Delta and Sinai may generate production of 900 million standard cubic feet of gas, Reuters reported.

Joe Kaeser, President and CEO of German company Siemens, said that he signed a $2 billion deal with President Abdel Fattah al-SIsi and the electricity ministry to build a combined-cycle power plant in Beni Suef. It is said to be the biggest project of its kind to bring energy to Upper Egypt, according to the state-owned Al-Ahram. The financing will be over 12 years and at a 1.6 percent interest rate, Kaeser said.

He also said the company will build a manufacturing plant for wind power and other energy projects will bring their Egypt total investments to $10 billion. The company’s projects will create 1,000 jobs, he said, as well as providing apprenticeships for up to 500 people.

The company has also decided to donate 200 million euros to the Egyptian people, he said, after Sisi explicitly asked him to donate money to the country. “A company that does not contribute to the society it operates in should not exist,” Kaeser said.

Meanwhile, British Petroleum (BP) finalized on Saturday a $12 billion deal it had initially announced earlier this month, to develop five trillion cubic feet of gas resources and 55 million barrels of condensates in the West Nile Delta.

Production is set to start in 2017, said BP, which will have 65 percent equity in the project partnership, Reuters reported. BP has said that production will eventually reach up to 1.2 billion cubic feet a day, which is equal to around 25 percent of Egypt’s current gas production, according to Reuters.

In a statement, the company CEO Nabeel Rahman said, “We will contribute in investing in health, money exchange, waste management, renewable energy and other fields.”

According to business portal Amwal al-Ghad, the Council of Saudi Chambers said the country’s private sector will invest $1.3 billion in Egypt, namely in the tourism sector, on Saturday.

Also on Saturday, the electricity ministry signed with China State Grid agreements worth $1.8 billion to develop the national grid as well as developing renewable energy projects.

Also from the UAE, the al-Sweidan Group signed an agreement with Egypt’s Ministry of Domestic Supply for a $6 billion investment in the Damietta Logistics Center for Grains.

There were also a series of announcements about private investment on Friday, including the chairman of Saudi Arabia’s A.A. Turki Group (known as ATCO) stating that his company will invest $3 billion in Egypt’s solar energy sector.

A consortium between Egypt’s Pioneer Holding and Saudi Arabia’s al-Muhaidib Group, along with an Emirati real estate developer and a Kuwaiti investment bank, which will partner on three housing projects at a total investment of $1.5 billion, was also announced.

Furthermore Egypt’s telecom tycoon Naguib Sawiris announced investments of $500 million by his companies in the field of solar energy and a new line at his Nile Sugar factory.

The UAE’s Bloom Properties said it is committed to investing $465 million in projects in New Cairo and 6 October city as well as on the North Coast, according to the privately-owned Al-Masry Al-Youm.

Egypt is also signing funding agreements with international financial institutions (IFI). The World Bank said it has allocated $5 billion over the next four years for its Egypt program, more than doubling the bank’s annual portfolio. The Bank’s MENA Vice President Hafez Ghanem said in a panel discussion with the Minister of International Cooperation Naglaa al-Ehwany that their target is private sector job creation.

In a $3 billion deal, the Islamic Trade Finance Corporation (an affiliate of IDB) will help Egypt import refined petroleum products over the next three years.

The Egyptian-Saudi Electricity Connection project will allow the exchange of around 3000 MW between the two countries. The Sharm el-Sheikh Airport Development project aims to increase the capacity of the airport to 18 million passengers annually by 2025, by the provision of advanced surveillance, air navigation, and passenger services systems that will help encourage tourism, the official statement read. And finally, the Assuit Refinery project will develop a refinery and the construction of a complex for high-level octane production.

Christian Danielsson, director general of the European Commission, said 22 million euros will be allocated to supporting economic and civil society projects in Egypt, adding that there are 80 projects in the private sector totaling 6 billion euros.

The European Bank for Reconstruction and Development has agreed to finance 23 private sector projects worth a total of 750 million euros.

Topics
Related
2015 Egypt Economic Development Conference
On the false hope of investor conferences
Mohamed Elmeshad | Once again, Egyptians must sit back and listen to their government convince them that they need to pin
2014/15 budget
Fall in global oil prices comes as a reprieve for Egypt
Amira Salah-Ahmed | The past eight months have been marked by a sharp and steady decline in global oil prices, a slump not
2015 Egypt Economic Development Conference
Are economic indicators pointing to broader recovery?
Isabel Esterman | As Egypt’s government gears up for a major economic conference next week, it has been presenting a
2015 Egypt Economic Development Conference
ECESR: Foreign direct investment alone won’t cure Egypt’s economic woes
Egypt’s government has viewed attracting foreign direct investment (FDI) as a goal unto itself, rather