Alexandria’s filmmakers make the most of their city

On Friday, Zawya‘s second night of “Shorts Revisited” was at full capacity. A crowd waited eagerly at the cinema’s entrance. But this crowd was full of faces new to the Cairo art scene, and that’s because it was a night dedicated to short films coming from Egypt’s second largest city, and second cultural capital, Alexandria.

The evening featured seven films — each very different — along with a Q&A session with the directors who could make it to Cairo for the weekend.

As film after film began and ended and I read each and every credit, I started to see names repeat. One film’s director was another film’s producer, and another film’s director of photography, and so on. Three names were especially prevalent — Islam Kamal, Samir Nabil and Emad Maher — but most names repeated throughout. And most films were supported either by a fund from the Bibliotheca Alexandrina or by the Alexandrian artist-run production houses Fig Leaf or Rufy’s.

The independent film scene in Alexandria is small, but has a strong presence in Egyptian selections for local and international film festivals.

“You work on everyone else’s film, so everyone works on your film,” Ahmed Nabil, director of documentary 17 Fouad Street (2014), told the audience. Since there is no real film industry in Alexandria due to its centralization in Cairo, they make their own way, he explained.

Mamoon Azmy, producer and screenwriter of Hayat (2013), told me that the film cost 10 foul and tameya sandwiches and bananas for the crew. While expressing appreciation for everyone’s volunteer efforts and in-kind donations of space, he emphasized that many others in the scene also work on very low budgets.

In Alexandria, many active independent filmmakers are not graduates of the High Cinema Institute (which only operates in Cairo), and thus are not members of the Film Syndicate. Due to outdated bureaucracy, it is almost impossible to get permits to film in public space without being officially recognized as a filmmaker. That means people have to find loopholes in the system or risk filming anyway. The danger is not only from security forces, but also from passersby, who tend to be suspicious of cameras in the street.

One film shown at Zawya that focuses on this theme is Ahmed Ghoneimy‘s acclaimed Bahari (2012). It’s based on a real encounter: Ghoneimy was held captive and asked if he was a child molester when citizens caught him filming local children. He engages with themes of control and fear of the other in a cleverly shot and edited 12-minute sequence.

Bahari is a result of the artist revisiting his fear, and one of the men holding him captive in the film is in fact the man who captured him years before in real life. With Bahari, Ghoneimy brings to the screen skepticism toward the other in public space — a skepticism that has prevailed in Egypt due to state propaganda — and also his quest to overcome it as an artist.

Another film inspired by real situations is Mina Nabil’s seven-minute Away from the Heat (2011), which shows a situation peculiar to Alexandria. Due to an incident Nabil read about in the newspaper in the early 1990s, in which a pharmacist was attacked during the night shift by a drug addict, many of the city’s pharmacies started installing steel gates through which late-night customers buy medication.

The film captures a situation, with no dialog, in which a pharmacist is attacked through the steel gate by a man seeking his fix.

Hayat, directed by Islam Kamal, is set almost entirely between an apartment and a street corner by the sea. It features many cameos by members of the city’s alternative art scene, but the focus is on the main character, Hayat (Amina Abo Douma).

She waits for her fiancé to return from his travels, but he never appears. With precision, Kamal’s camera captures naive hope in the protagonist’s eyes and her misery. He uses details such as cassette tapes, posters and Hayat’s makeup to help the audience realize that a decade has passed. 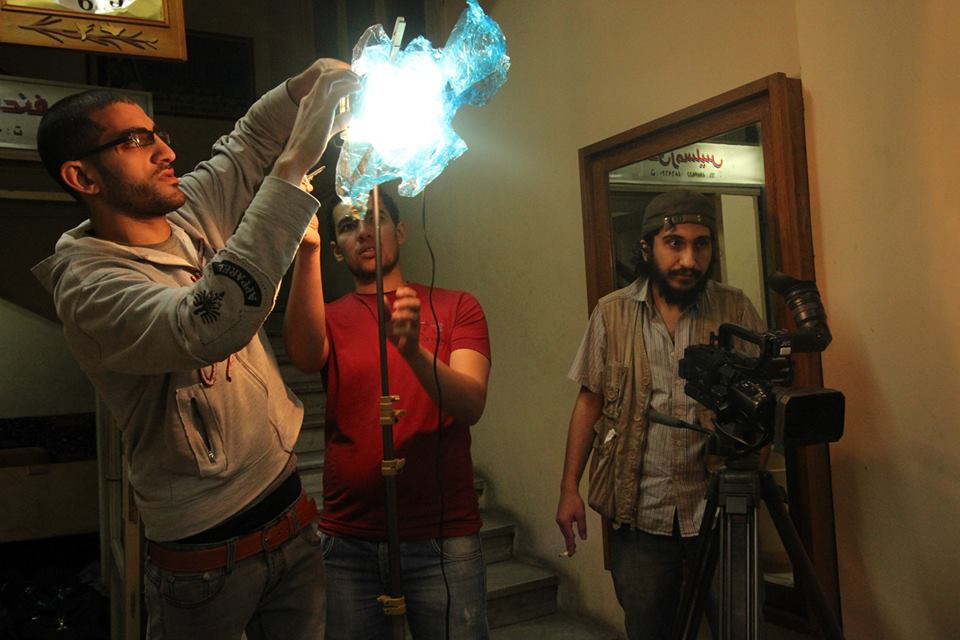 Azmy, the film’s writer, told the audience that it is based on the story of a woman he met who lives in in Shatby. The real story was that she had been waiting for her lover for 25 years, but the filmmakers did not have the makeup abilities or budget to make 25 years believable in the way they wished.

Also protagonist-driven, Emad Maher’s Zakaria (2012) is adapted from Naguib Mahfouz’s short stories Ahlam Fatra al-Naqaha (The Dreams, 2004). This short takes a surrealist approach: Even though the protagonist (Sameh Nabil) is the central focus, he is passive. Decisions are taken on his behalf by his doctor, mother and tailor. One quirky element is that he’s banned from eating chicken by his doctor, and he takes this ban to the afterlife

Kamal, Zakaria’s director of photography, portrays the young character’s loneliness as he walks around Alexandria’s downtown in fitting black and white. Once full of character and color, it is shown as dead and dull.

A particularly picturesque shot is taken at the film’s very end on an empty Mediterranean beach with Zakaria and his mother. A wide angle gives a sensation that the sea is endless. The moment Zakaria leaves his mother and walks into the waves — to his death, it seems — we see it’s the only real decision he makes in the film.

Mohamed al-Hadidi’s Alban Wadyal-Neel (2013), is supported by all three institutions: Fig Leaf, Rufy’s and the Bibiliotheca. It’s dreamy, scattered and full of abrupt mood shifts. Hadidi told Zawya’s audience that he was first struck by the location, Alban Wadi al-Neel — a grocery store where people are also served lactose-based food and drink. He then collected scenes from his own dreams and thoughts and put them together into an absurd sequence.

The resulting losses in storytelling are compensated for by the choice of locations around Alexandria in late nights and dawns. Crowded, hectic locations are shown in calm moments with a random selection of characters that provoke our curiosity. The film’s coloring takes a soft palette, and combined — yet again — with Kamal’s dexterity behind the camera, visually it proves to be a winner.

While many of the night’s films pay homage to Alexandria, it was Ahmed Nabil’s documentary short 17 Fouad Street that seems to epitomize the city. Limited by one location, a shoe shop on one of its oldest and busiest streets, Nabil focuses on Noubar, an Armenian-Alexandrian shoe salesman obsessed with old styles and following the developments of the army tanks during the 2013 curfew.

It’s nostalgic to the core for Alexandria’s cosmopolitan past. From the choice of character, to the camera’s focus on endless stacks of shoe boxes and the simply laid-out shop window, it’s clear that Nabil is keen to document a part of Alexandria that’s fading away.

This nostalgia is particularly present in one conversation. Noubar’s friends talk about the cowboy films they used to watch for three-piaster tickets, and how nowadays tickets are expensive and films are bad. They discuss the closure of Alexandria’s old cinemas and the destruction of Cinema Rialto to build a mega-mall.

The evening’s final film, Fig Leaf founder Mark Lotfy’s Aamal Kida (Do As You Said, 2014), was probably the most striking of the bunch, mostly due to its shock value.

It starts off with credits cleverly designed by Alexandrian artist Aya Tarek, in a similar format to the printed Quran. Then two storylines converge at the Bibliotheca Alexandrina’s plaza. In one, an established director (Khaled Abol Naga) is boasting about his European Union film grant to a young, naive woman trying to become a director. In the other, two garbage collectors play with thrown-away toys at the back of a garbage truck.

Lotfy’s sequences shed light on those society excludes: People pushed to the bottom of the economy are juxtaposed with the selectivity of funding and awards in the cultural world.

His location serves well, and as in most of the other films, Islam Kamal’s footage brings it to life.

Even though Alexandria’s film scene includes more artists than this extended group, these filmmakers do seem quite prevalent. In all local festivals such as Ismailia, Cairo and Rencontre de l’Image at Cairo’s French Institute, at least one of them is usually present (and often takes a prize home).

They told Zawya’s audience that there is another group of filmmakers currently working on a long feature, in addition to a festival of shorts. Also, a new space focusing on film and visual art opened in Alexandria last year called Wekalet Behna, which is slowly building a role in screening independent cinema and also intends to eventually support production.

While the centralization of the film industry continues, “Shorts Revisited” was a reminder that by supporting each other, Alexandrian filmmakers continue to push forward a small but distinctive movement.

AD
You Might Have Missed
What we talk about when we talk about trees
Mugamma revisited: Reimagining the building and the square
Carbon Colonies & A Green New Deal
Where do old lesbians go to die?
AD
Rowan El Shimi
Culture journalist
107 articles on Mada