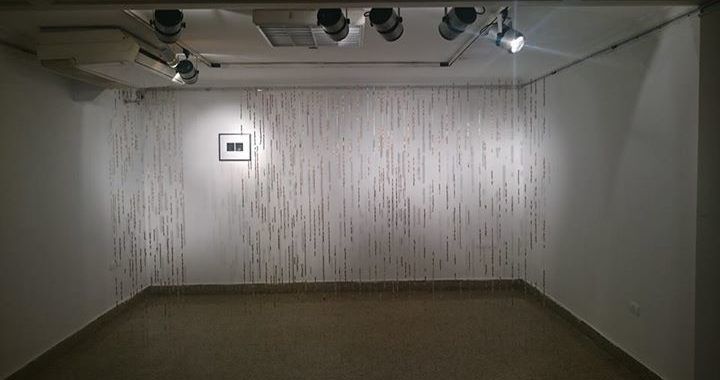 Back to the Origins is the third in a series of exhibitions, Futuropolis, curated by Paul Geday at the Saad Zaghloul Cultural Center in downtown Cairo. It features the work of eight artists, young and old, in an attempt to speculate about “the future of our world.”

The show centers on the notion of “a basic unit,” which Geday explains in the exhibition blurb as “the origin of everything.”  The artists were invited to meditate on the terms “unit” and “obsession” to guide their practice. This common thread highlights their creative process rather than a central theme or subject, creating homogeneity between the work processes while maintaining diversity of the pieces. From mixed-media installation to drawing and sound-based works, the artists come from a variety of artistic media. The subject matter is also diverse, tackling themes ranging from feminism to black magic to the January revolution.

Upon entering the first space we are greeted with a work by the curator himself: Three framed images of chemical reactions on chromatic paper. Clearly the results of a lab experiment, the piece rediscovers a chemical reaction on chromo-coated paper from 1978. “I chose this piece as an illustrated statement, reads Geday’s description, “[…] about the travel of molecules, the essence of life, the basic unit.” The work leaves questions unanswered, such as the source of these experiments, where and for what they were used, and how they ended up with the artist.

Nearby, an installation by Amanda KM shows her signature cigarette butts forming a curtain from ceiling to ground. Two small photos hang in a frame where there’s a gap in the curtain, showing two black-and-white profiles of smokers exhaling — a poetic rendering of a habit generally deemed repulsive. Near the description, a mug filled with cigarette butts is left to reek of tobacco on a shelf. After a few days, the display is meant to fill the confined room with the stench of cigarette butts. This project is part of a series by Kerdahi using collected cigarettes as units, and in Futuropolis III, the piece responds very directly to the curatorial focus. 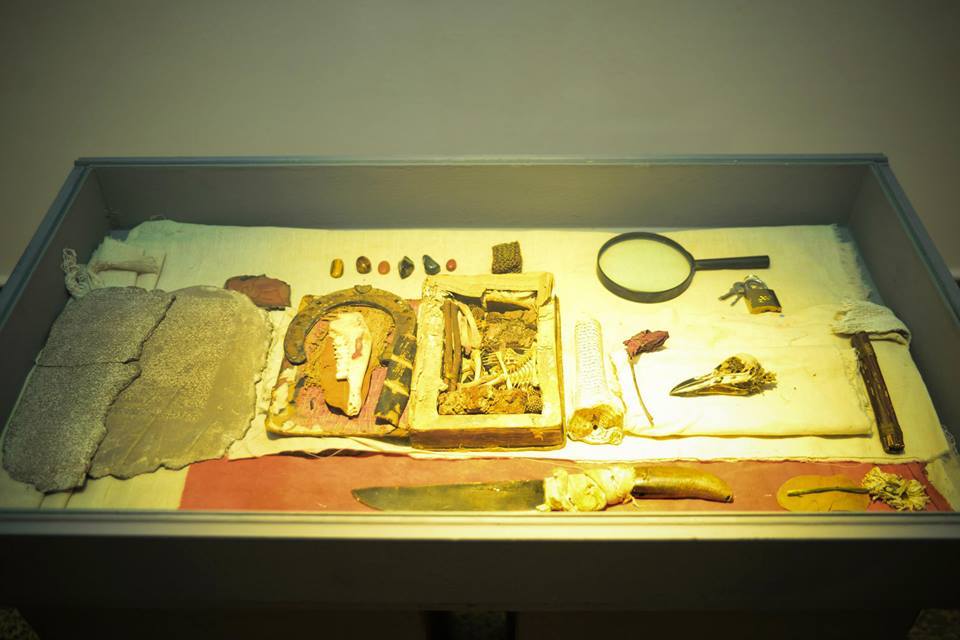 The next room shows Mohamed Monaiseer’s Talisman, ink drawings on cloth and a glass table containing amulets. The inscriptions, in an unintelligible language, are supposedly a spell to call on the forces of nature or a genie. It is unclear whether these inscriptions are genuine or rather the artist’s personal depiction of what black magic looks like. The museum-like aesthetics emphasize the artist’s absence.

Down the hallway, once we’ve passed the government offices and storage rooms of this state-run transformed basement, we’re reminded again that we’re in an exhibition space. The two large inner rooms contain a combination of drawings, glass paintings and an installation, the latter by Huda Lutfi. Her familiar papier maché fool’s hats are placed on wooden stands and made of newspaper clippings from post-January 25 happenings.

In the back of the room, we finally reach the two pivotal pieces: a music piece by composer and oud player George Kazazian, specially commissioned for the exhibition, and a video tribute put together by the curator to Mohsen Sharara (1934-2006), an Egyptian artist, filmmaker and architect, projected nearby.

Kazazian’s piece is listened to in a dark space while sitting on a bench in front of two large speakers. We’re serenaded with his composition of soft tones, which I was only able to fully indulge in when I had the gallery to myself. I was taken aback by it, by the layers of what seemed to me tiny sounds forming a diagrammatic dance in my mind’s eye. I felt it deserved to be presented in a more slick-looking and less distracting environment to match the quality of these sounds. 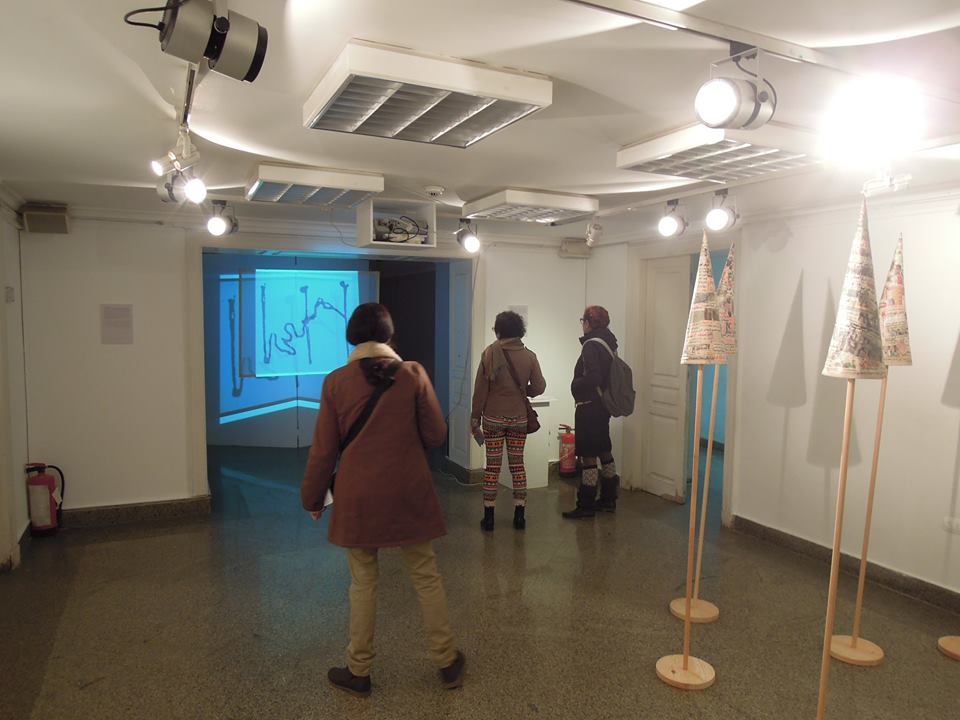 The homage to Sharara is interesting in terms of the research it presents. It is an attempt by Geday to recreate some of Sharara’s lost animations, “Compositions & Permutations.” Through a personal account, it opens a window into recent Egyptian art history, since Sharara is said to have destroyed his work during his later days. Line drawings projected onto a screen form abstract outlines of empty shapes. While the drawings are not animated, they leave the viewer with an idea of what Sharara’s original animated films looked like.

The piece was coupled with photocopies of reviews, articles and photos of his work. The documents were presented inside a folder that the audience could flip through, not as part of the work itself. The importance of the artist is referred to but not fully explored through this presentation, leaving us wondering about the selection of articles and the artist’s historical relevance.

The show had some good points and some less exciting ones, but beyond the works themselves, it is part of a hopeful attempt to reintroduce a public gallery space into downtown Cairo’s independent art scene.

The Saad Zaghloul space can often strangle one’s experience of artwork, given its low ceilings and spatial rigidity. Its many limitations — in terms of adequate technical equipment and flexibility — make it difficult for one to design an alternative trajectory and highlight the work itself without being reminded of the governmental limitations of Egypt’s Culture Ministry. Walking down hallways filled with open office doors and loud chipsy-eating-officials compels the viewer to disengage, make a conscious effort to turn a blind eye to unnecessary sounds and smells.

Ultimately curators and artists work with what they have, negotiating with the imposed limitations — whether inflicted by the state or monopolizing private companies — in hopes of transcending the mediocrity they impose.

Meanwhile, the Futuropolis exhibition series is engaged in a larger discussion regarding the exhibition of contemporary art in state-run galleries. It suggests that the radical position of completely disregarding public art spaces seems uncalled for, especially at a times like this, when buildings in downtown Cairo are being bought up by a private real estate company and the future of its independent cultural scene is unpredictable.

But the challenges of having to exhibit in such dire conditions cause an additional strain on curators, artists and art audiences. The main question this raises relates to the imagination of an art space beyond a mere presentation of artworks, and more as the creation of a sensory experience in which a viewer is invited to engage with art through spatial design. At Saad Zaghloul Cultural Center, bureaucracy is imposed not only on the curator but also on the viewer, by the literal opening of office doors, which inevitably puts all exhibitions in the space into a sociological framework that they may or may not desire to recognize. The question for practitioners of creative fields is: What alternatives can we imagine and create to transcend such restraints?

Back to the Origins is showing at the Saad Zaghloul Cultural Center until 9pm on February 11.

AD
You Might Have Missed
What we talk about when we talk about trees
Mugamma revisited: Reimagining the building and the square
Carbon Colonies & A Green New Deal
Where do old lesbians go to die?
AD
Sama Waly
10 articles on Mada

Topics
Related
arts funding
Gypsum Gallery’s first year: An alternative in the making
Ismail Fayed | With nine shows for its first year, Gypsum Gallery is proving itself to be a different and perhaps alternative
American University in Cairo
The 2nd Egyptian Scenography Exhibition and the shadow of the state
Ismail Fayed | Ismail Fayed is left wondering if the regime is asserting the presence of the military even through niche
Alexandria
Atelier Alexandria: The persistence of the state
Sohier Amin | It seems that a serious generational gap may be threatening this well-preserved ecosystem that has sustained