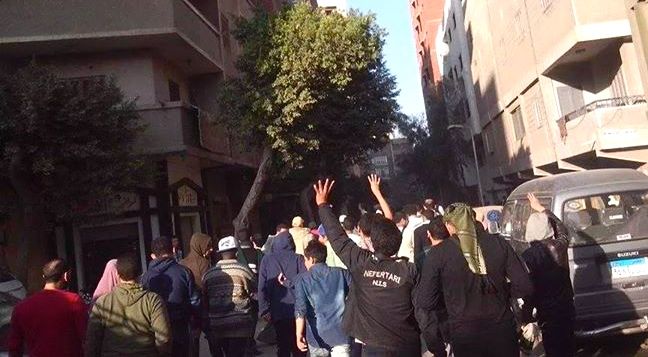 A couple of days after clashes in Matareya around the fourth anniversary of the January 25 revolution, Hajj Hazem, who owns a candy shop right next to Al-Rahman mosque, was still clearing glass after a bullet shattered his front window. While he is disengaged from politics, he is supportive of protesters, who he allowed to hide in his shop when the police started to fire.

Hazem says protests grew exponentially in Matareya because the families of those who died over the last few years joined in. Home to no less than 500 dead residents, who were killed in clashes with security forces over the last four years, as estimated by local activists, these losses have created a sense of communal solidarity in the face of police violence and a thirst for retaliation that is proving to be stronger than protest fatigue, fear and ideological divisions.

Today, Matareya is one of the only areas capable of defying the severe crackdown on street politics, and has been the site of large protests that the authorities have struggled to contain.

A few days after the January 25 revolution anniversary clashes and the deaths of 12 residents, the East Cairo neighborhood was tense but calm.

Police trucks roamed the streets, Special Forces and tanks were stationed in several spots and, while the main streets where events transpired were calm, protests continued in small alleys, largely outside of police reach.

The clashes erupted right after noon prayers on January 25, as security forces preemptively fired tear gas at Al-Rahman mosque, one of the protest centers in the area located on the famous Horreya Street. Tear gas, pellets and live fire continued as military forces arrived on the scene two days later. The power was also cut, further isolating the area of the clashes. Police forces engaged in fierce battles in side alleys, which led to fatalities among bystanders and tear gas suffocating residents.

Walid Mahmoud, a 36-year-old barber, walks around with a pellet that ricocheted off his belt during clashes with the police. “People here are not giving in because, since 2011, we’ve seen a lot of our friends die and no one got their rights back. The officials responsible for their deaths were not held accountable,” he says.

Matareya is divided into closely-knit areas, which makes the deaths of the last four years personal for most residents. Its large population, over three million according to official statistics, is comprised mainly of craftsmen. The area’s abundance of weapons, drug dealers and high rate of criminal activity make it a difficult opponent for security forces.

Almost everyone in Matareya has at least an acquaintance, if not a friend or close neighbor, among the casualties of the last four years.

Over a dozen protesters interviewed had no political affiliation and no demands other than retaliation for the victims. When asked about their motivation to brave severe security crackdowns, the answer always had to do with a death witnessed, a loved one lost or a hunger for justice.

A low-income area in the suburbs of Cairo, Matareya had already suffered from neglect and police abuse before January 25, 2011, the toll of which culminated on January 28, when Matareya police station was one of the first to fall in the country, resulting in some 35 casualties, according to local sources.

At least 17 of the 74 football fans that died during the Port Said stadium tragedy of 2012 were from Matareya. With a strong Brotherhood base, the residents of the neighborhood also formed a large contingent of the Rabea al-Adaweya sit-in in August 2013, and suffered from a high number of casualties.

During the commemoration of the revolution last year, 75 people died in Matareya in clashes with the police.

“In other areas, people help the police forces, but here, people are on the protesters’ side because they’ve seen nothing good from the state. They’ve seen people die and those responsible for their deaths walking free,” says Hassan Karam, a law graduate who works as a handyman and who took part in last week’s protests.

The shared loss has also transcended the rift between the Muslim Brotherhood and other political forces that gets in the way of coordination elsewhere. Protest leaders in the area say the recent demonstrations were organized in collaboration with local leaders from various different currents.

However, Matareya remains a historical stronghold for the Muslim Brotherhood, which has also contributed to its ability to continuously mobilize. Since the dispersal of the Rabea al-Adaweya sit-in in August 2013, which left over 1,000 Brotherhood supporters dead, weekly Friday protests have continued in Matareya, even after they dwindled elsewhere due to the security crackdown.

In November, as calls for an Islamic revolution failed to materialize across the country, Matareya stood out with large protests that escalated into clashes with the police, leaving at least one dead, according to the Health Ministry.

Mohamed Awad, an activist from Matareya who was a member in the Youth of the Revolution coalition and ran for parliament on the “Revolution Continues” list in 2011, which stood against Islamist lists, explains that the Muslim Brotherhood replaced the state in Matareya in many ways, opening centers that provided health services and issuing monthly allowances to thousands of families. Some people became sympathetic to the Brotherhood when these services stopped after President Mohamed Morsi was ousted from power.

The authorities have largely blamed the violence in Matareya on the Muslim Brotherhood, ignoring suggestions of other motivating factors by residents.

In a press conference on January 26, Interior Minister Mohamed Ibrahim claimed the Brotherhood brought supporters to Matareya from the Delta and other Cairo neighborhoods after failing to mobilize nationwide.

Residents say the continuing police presence in the area has not had the desired effect. The brutal police reaction to protests, which affected innocent bystanders, has turned some sympathizers into active protesters.

Protest leaders said residents often collaborate with demonstrators by alerting them to police movements and imminent attacks. And, although security forces often contract thugs to assist in confrontations, Awad says they have frequently joined the side of protesters.

“At this point it goes beyond sympathy, people start thinking the state is killing us and we have to protect ourselves with our own hands,” Awad says.

Craftsman Mostafa Abdu was picked up from Matareya Square on January 21 by plain-clothed policemen and detained overnight at Amiriya police station, along with over two dozen other young men who were released the next morning after security checks were conducted.

“I make my livelihood day by day, what am I supposed to do when they make me miss a day of work?” Abdu asked.

Realizing the need to build bridges with residents in the area, the Interior Ministry issued public orders to its forces not to be dragged into alleys in Matareya and to stick to the main streets, but the damage had already been done.

Prime Minister Ibrahim Mehleb and other officials visited the area a week after the clashes, inaugurating development projects in an effort to appease the anger. However, Awad and others say nothing short of justice will bring peace to this volatile neighborhood.

“The marches continue in Matareya because there are 500 houses with open wounds and people still care because there have been over 5,000 injured since 2011,” Awad says.

AD
You Might Have Missed
Mugamma revisited: Reimagining the building and the square
Carbon Colonies & A Green New Deal
What we talk about when we talk about trees
Where do old lesbians go to die?
AD
Heba Afify
117 articles on Mada

Topics
Related
Muslim Brotherhood protests
Matareya protests turn deadly, but elswhere, ‘Islamic revolution’ fails to materialize
Security visibly intensified across Egypt on Friday in anticipation of the so-called “Islamist revolution”
building collapses
At least 14 killed and 7 injured in Matareya building collapse
A building collapsed in Matareya early Tuesday morning, killing at least 14 and injuring 7, according
detainee and prisoner deaths
Another detainee dies at Matareya Police Station
Since Monday, prosecutors have been investigating the death of yet another detainee in custody at Matareya