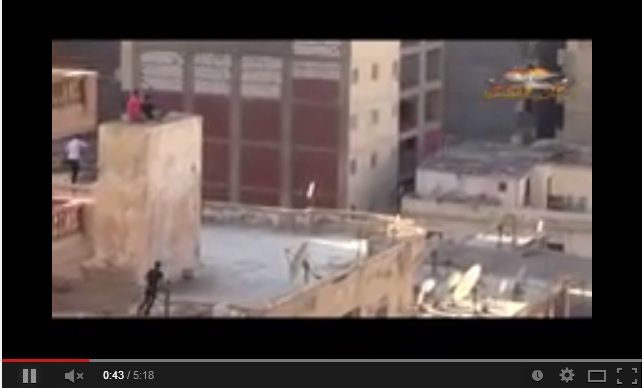 The Appeals Court upheld a death sentence and long-term prison time for 58 people in a Thursday ruling, though some activists say not all the defendants were implicated in the heinous crimes that elicited the harsh verdict.

Mahmoud Hassan Ramadan was sentenced to death for throwing three young men from the rooftop of a high-rise building in Alexandria’s Sidi Gaber neighborhood. A 19-year-old man was killed in the incident, while the two other teens were critically injured. Video footage showed Ramadan and others throwing the victims from a water tank above the building onto the rooftop, and then later throwing them into the street. The video went viral shortly thereafter, provoking international outcry.

Ayman Mahmoud, a lawyer representing the victims’ families, told Mada Masr that the clashes erupted when Brotherhood protesters were en route to demonstrate at the Northern Military District close to Sisi Gaber. Area residents then attacked the protest to prevent the Brotherhood supporters from torching the military facility.

The victims had climbed to the top of the building to throw rocks at Brotherhood protesters below, Mahmoud said.

“Brotherhood supporters went to the rooftop, stabbed some of the victims and threw them from the meters-high water tank stationed in the middle of the rooftop, then from the rooftop to the bottom of the building,” the lawyer recounted.

After his arrest, Ramadan — the defendant who appeared in the video of the incident with a long beard and brandishing an Al-Qaeda flag — publicly confessed to perpetrating the attack.

“I was astonished. What did we do?” he said during a recorded confession published at the time.

He accused the victims of harassing him and the rest of the demonstrators. “This made us even angrier,” he said.

Mohamed Gaber, an Alexandria-based activist and an eyewitness to the killings, told Mada Masr that he saw a group of bearded men grabbing two young men inside the building and beating them.

“They said, ‘We already killed another two,’ in a very celebratory tone,” he recounted.

But Gaber believes this is a particularly complicated case. Although many of those convicted did commit a brutal crime, other defendants were randomly arrested — some were even part of the pro-military side of the conflict, he says.

“There are killers, and there are some innocent people who were really randomly arrested. The case is in some ways different from the other mass death sentences handed down to Brotherhood supporters, but in some ways similar,” Gaber explained.

The Egyptian judiciary has been condemned for handing down mass death and jail sentences against Brotherhood supporters, and recently against non-Brotherhood activists as well. On Monday, the Giza Criminal Court sentenced 183 people to death on charges stemming from violence that broke out in the Giza town of Kerdasa in August 2013.

On Wednesday, activist Ahmed Douma and 229 others were sentenced to life in the “Cabinet clashes” case. They were also collectively fined LE17 million for damages to the Institut d’Egypte collection incurred during violent confrontations between protesters and military forces in December 2011.

Topics
Related
detainee and prisoner deaths
Prisoner in Alexandria: From detention to death
Mostafa Mohie | On Monday, 27-year-old Mahmoud Mohamed Saad Eddin died at the university hospital in Alexandria. He was
Alexandria
Death sentence upheld for Alexandria man found guilty of killing teen
The Alexandria Criminal Court upheld the death sentence handed down to Mahmoud Hassan on March 29 after