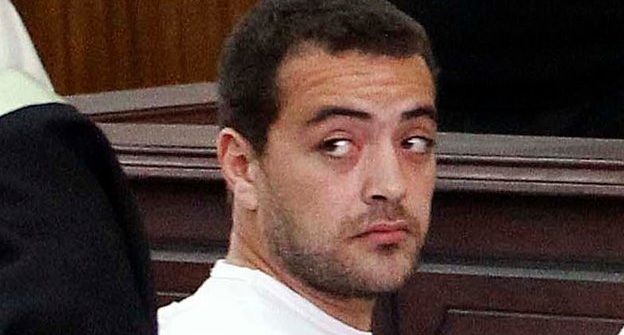 Convicted Al Jazeera journalist Peter Greste is on his way back to Australia, and reports suggest that fellow journalist Mohamed Fahmy will soon follow suit and be deported to Canada. But uncertainty still looms over the fate of their Egyptian colleague, Baher Mohamed.

The three men were arrested on December 29, 2013 while reporting on the violent aftermath of former President Mohamed Morsi’s ouster for the Qatari satellite channel’s English division. They were prosecuted on terrorism-related charges for spreading false news with the intent of destabilizing the country. The international community was outraged when they were sentenced to seven years in prison.

Mohamed, an Egyptian producer for Al Jazeera, received an extra three years on accusations of possessing a bullet at the time of his arrest, meaning he’ll spend 10 years total behind bars.

Greste was released from prison and deported on Sunday in accordance with the recently passed Law 140 (2014), which allows the deportation of foreigners at any point during their prosecution or detention at the request of their home countries.

Judicial sources said the deportation law doesn’t apply to dual citizens, suggesting that Fahmy, who also holds Canadian citizenship, would have to renounce his Egyptian nationality in order to be released.

Jihan Rashed, Mohamed’s wife, is extremely frustrated at the injustice.

“Are foreigners the only human beings? Is the Egyptian not a human being as well?” she asks.

Rashed laments that little attention is given to the Egyptian citizen in the case, suggesting that Greste was only released as a token to “shut up the foreign media.”

“But how about you actually look into the case?” she demands.

When President Abdel Fattah al-Sisi issued the decree last November to facilitate the deportation of foreign detainees, Greste and Fahmy’s families and lawyers fought to invoke the new legislation.

“They went to their countries and their embassies,” Rashed says. “But who do I go to? I want my voice to reach the prosecutor general and the Journalists Syndicate. I want my embassy.”

A group of journalists are now trying to put the spotlight on Mohamed’s situation, calling for social media users to circulate his picture and raise awareness of his ordeal.

“His name is Baher Mohamed,” Hossam al-Sokkari, the former head of BBC Arabic Online, wrote on his Facebook page. “Unfortunately you haven’t heard about him a lot, even though he is in the same case as Peter Greste and Mohamed Fahmy.”

Sokkari lamented that Greste’s and Fahmy’s names are more widespread, simply because they have foreign nationalities.

“You can’t release one and have the other two remain in jail when they were all imprisoned in the same case,” Balshy says.

However, Mostafa Nagy, a member of the journalists’ defense team, points out that Greste was “deported,” not “pardoned.” Legally, he should either be retried in his home country or serve the rest of his sentence there, according to Nagy.

Balshy says that the journalists’ campaign calls not only for Mohamed’s release, but for the pardon of all Egyptian journalists behind bars.

The Journalists Syndicate has compiled a list of all the imprisoned journalists, including those who aren’t syndicate members, and presented it to the general prosecutor and other governmental entities, Balshy says.

“We are not only calling for imprisoned journalists to be released. We are calling for an environment that prevents the arrests of journalists in the first place,” he explains.

Earlier in January, the Court of Cassation accepted the defendants’ appeal against their guilty verdict and ordered a retrial. But Rashed says that she isn’t sure what to expect for her husband, the syndicate’s campaign notwithstanding.

Mohamed’s fate now rests solely with the judiciary, Rashed says, wondering how the court will handle the case in light of the recent developments.

“One of the defendants has been released, and the other is in the process [of being deported],” she says. “How can you still prosecute the producer who was working under them?”

Nagy reiterates Rashed’s assertion that Baher’s only chance for release lies in the retrial. He says that the defense team would demand his release pending the trial.

“We will not rest until Baher and Mohamed also regain their freedom. The Egyptian authorities have it in their power to finish this properly today, and that is exactly what they must do,” wrote Mostefa Souag, acting director general of Al Jazeera Media Network.

Rashed says that Al Jazeera is working on Mohamed’s case and won’t rest until he is free, but that “they only hear the news, like us.”

“The news that Peter Greste will finally be allowed to leave Egypt after more than a year in prison comes as a welcome relief, but nothing can make up for his ordeal. It is vital that in the celebratory fanfare surrounding his deportation, the world does not forget the continuing ordeal of Baher Mohamed and Mohamed Fahmy who remain behind bars at Tora Prison in Cairo,” said Hassiba Hadj Sahraoui, Amnesty International’s deputy director for the Middle East and North Africa.

Amnesty specifically referred to Mohamed, who has three young children. He missed the birth of his youngest son in August 2014 while he was in prison.

In his first interview since his release, Greste called on the authorities to set Fahmy and Mohamed free.

“I feel incredible angst about my colleagues, leaving them behind,” Al Jazeera reported Greste as saying.

“Amid all this relief, I still feel a sense of concern and worry. If it’s appropriate for me to be free, it’s right for all of them to be freed,” he continued.

In a press conference, Greste’s family also confirmed that he would not rest until his colleagues were released.

As for Rashed, she says she will keep fighting for her and her children’s rights.

“I wish I could be proud of my Egyptian nationality. I want there to be justice and dignity, but this is not the case,” Rashed says. “This is my right and my children’s rights. I want my rights in my own country.”

AD
You Might Have Missed
What we talk about when we talk about trees
Where do old lesbians go to die?
Carbon Colonies & A Green New Deal
Mugamma revisited: Reimagining the building and the square
AD
Dalia Rabie
38 articles on Mada