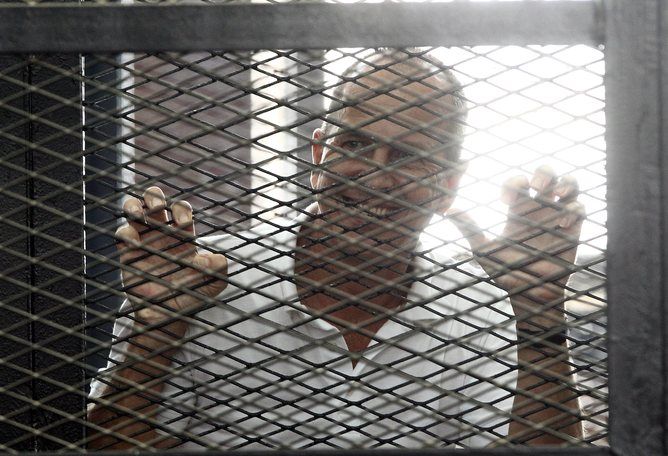 After 400 days in prison, Al Jazeera journalist Peter Greste was released on Sunday afternoon and deported.

The Interior Ministry confirmed in a statement on its official Facebook page on Sunday afternoon that Greste was released and deported in accordance with Law 140 (2014), following the approval of the general prosecutor and the Cabinet.

Law 140 allows the deportation of foreigners at any point during their prosecution or detention at the request of their home countries.

Head of the Arabic Network for Human Rights Information Gamal Eid said, “Of course we’re happy with the news of Greste’s release, but we were hoping that he would be released because he’s innocent or based on normal laws, rather than based on an unconstitutional law.”

The Australian Embassy and Egyptian Foreign Ministry arranged for Greste’s flight back to Australia on Sunday afternoon, according to the state-owned Middle East News Agency.

Greste’s family confirmed his departure from Egypt in a statement on the official Facebook campaign for his release. His brother Andrew Greste said, “We’re ecstatic that Peter has been released and we now ask if the world could respect his privacy, to give him time to appreciate his freedom before he faces the media.”

The released journalist’s parents Lois and Juris announced a press conference in Brisbane, Australia to provide more information, adding that they would be available for limited interviews.

Al Jazeera issued a press release following the decision, expressing joy for Greste’s family, but asserting that they would continue to campaign for the release of his two colleagues and the clearing of their names in absentia.

“We will not rest until Baher and Mohamed also regain their freedom. The Egyptian authorities have it in their power to finish this properly today, and that is exactly what they must do,” Mostefa Souag, acting Director General of Al Jazeera Media Network said.

Judicial sources said the deportation law doesn’t apply to dual nationals, suggesting Fahmy would have to surrender his Egyptian citizenship in order to be released.

Mohamed, who has no foreign citizenship, has no chance of being released under this law.

Greste and his colleagues Mohamed Fahmy and Baher Mohamed were arrested on December 29, 2013, and prosecuted in the case widely known as the “Marriott cell.”

On June 23, the court sentenced Greste and Fahmy to seven years in prison and Mohamed to 10.

Greste was detained in solitary confinement for a month before charges were formally brought against him.