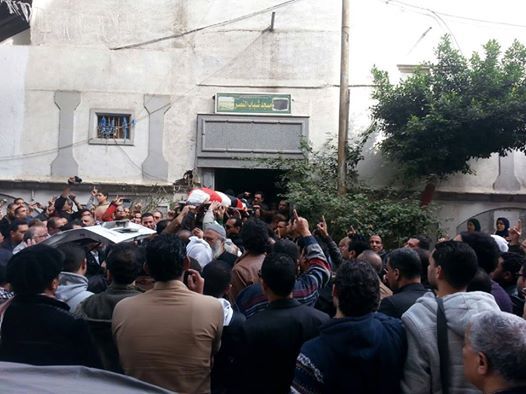 ​Hundreds marched carrying the body of killed socialist activist Shaimaa al-Sabbagh on Sunday at noon from Al-Saha mosque to the Manara cemetery in Alexandria.

Sabbagh’s body was transferred to her hometown, Alexandria, last night after she was reportedly shot dead while participating in a peaceful march in Talaat Harb on Saturday.

The march, which consisted of no more than 30 people, was organized to place flowers in Tahrir Square in commemoration of the martyrs on the fourth anniversary of the January 25 revolution. Sabbagh was a leading member of the Socialist Popular Alliance Party that organized the march.

The Forensic Medical Authority released Sabbagh’s autopsy report last night, revealing that she was killed by Birdshot, sustaining wounds in the back that punctured her lungs and heart.

The crowd chanted during the funeral procession against the regime, military rule and the police. Chants also demanded retribution for those killed by the police.

In a press conference held at noon at its headquarters, the Socialist Popular Alliance Party held the security apparatus responsible for Sabbagh’s death.

Medhat al-Zahed, the party’s acting president, said that the organizers of the march last night had agreed not to engage in any altercation with security and to disperse the march if any tension started. He added that the party didn’t acquire a permit from the Ministry of Interior for the march because the participants only wanted to put flowers in Tahrir in honor of the martyrs, and not to protest.

“The killer is the one side that was present there. The Ministry of Interior killed Shaimaa,” he concluded.

Motaz al-Shennawy, the head of media in the Socialist Popular Alliance Party, told Mada Masr that the party demands retribution against those responsible for Sabbagh’s death, given that there are videos that he claims show the perpetrators clearly.

Shennawy also demanded the release of six protesters arrested from the march yesterday, including Talaat Fahmy, the secretary general of the party.

A security source told Mada Masr that those arrested would be charged with illegal assembly, which created the circumstances leading to Sabbagh’s death.

The Association for Freedom of Thought and Expression said the six arrested were released on Sunday night.

A memorial for Sabbagh at Omar Makram Mosque was canceled by security on Tuesday, according to the Popular Socialist Alliance Party.