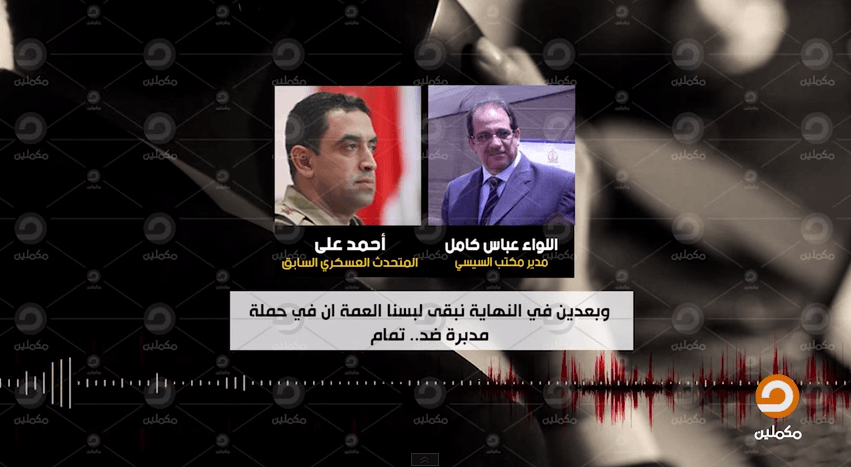 In the latest in a series of audio leaks, Abbas Kamel, head of the president’s office, is heard giving Ahmed Ali, former spokesperson of the Armed Forces, detailed instructions to recruit media figures in order to sway public opinion in Abdel Fattah al-Sisi’s favor in his previous presidential bid.

In the phone conversation, aired Monday night on the Mekameleen satellite channel, Kamel tells Ali to reach out to “our people in the media,” and tell them to “create a state,” and “rile people up.”

The message Kamel wanted to disseminate was that Sisi is facing a campaign tarnishing his image and that Egyptians need to stand behind him. He wanted media personalities to ask the Egyptian people why they would do this to the man “who sacrificed for them.”

Kamel continues to say that Sisi put himself, his wife, children and grandchildren under threat, adding that he could’ve retained his position in the Armed Forces and “no one could’ve come near him.”

“We have a man who is brave, special, free, Egyptian and nationalistic,” he said, referring to Sisi. “What has he done to us so we do this to him?”

“Protect your candidate,” he told Ali. “Stand by him. How can you let people cast doubt on him?”

Kamel goes on to name several media personalities, referring to some of them as “that kid,” and “that girl,” that Ali should get in touch with. They include Ahmed Moussa, Wael al-Ibrashi, Ibrahim Eissa, Amany al-Khayat, Rola Saad, Nayla Omara, Osama Kamal, Mahmoud Mosallam, Azza Mostafa and Youssef al-Husseiny.

He mentions Eissa specifically, telling Ali to call him and tell him that “[Sisi] is very upset, and I feel bad that people are doing this after everything he sacrificed for them.”

He says to tell Eissa that if people want Sisi to withdraw his candidacy he will, and he will stay home.

“He doesn’t want anything, not elections or anything,” he said, “Why insult him and doubt him?”

Kamel also mentions media personality Mahmoud Saad, saying he had recently received a call from Saad asking what he did wrong, and that he heard he had upset “them.”

“He told me that we had already agreed and that he loves and supports [Sisi],” he said, before dismissing Saad, saying “we can leave him for now.”

Kamel also speaks of integrity of Sisi’s campaign, saying the Egyptian people are free to choose him if they please. He says the Field Marshal doesn’t need to resort to “cheap methods” in his campaign and that he respects everybody.

Kamel, however, tells Ali that he doesn’t have to start the campaign that same day, and that he can start with just a few anchors, such as Omara.

The last leak was of an audio recording allegedly detailing conversations between military leaders, Supreme Council of the Armed Forces member and deputy Defense Minister for Constitutional and Legal Affairs Mamdouh Shahin is heard assuring a high-ranking presidential aide that he will interfere in a civilian trial of several police officers.