Ahmed Badry’s show at Medrar, The Provisionary That Lasts, is physically pale, modest and deadpan. But it’s also hilarious, engaging and political.

There are almost 50 drawings in the exhibition, all small — the same size — and in black frames. Thin blue lines outline shapes on white paper, without shading or coloring in. The shapes describe manmade objects that have been modified or combined in ways that were not intended by the manufacturer.

Some objects have been fixed in a makeshift way (a door key fixed to the top of a faucet to replace its missing handle), or represent ingenious solutions (a toilet seat reconfigured as a basketball hoop). Some objects have been constructed, perhaps accidentally, in a way that makes them unusable (like stairs blocked at the top by some stairs going the other way) or even dangerous (a desk fan taped upside down to a ceiling). Some things are solutions to design problems (a door that won’t open because the toilet’s in the way) and some have been cobbled together for no discernable purpose (a faucet redesigned in a way which makes the water stream miss the sink altogether). 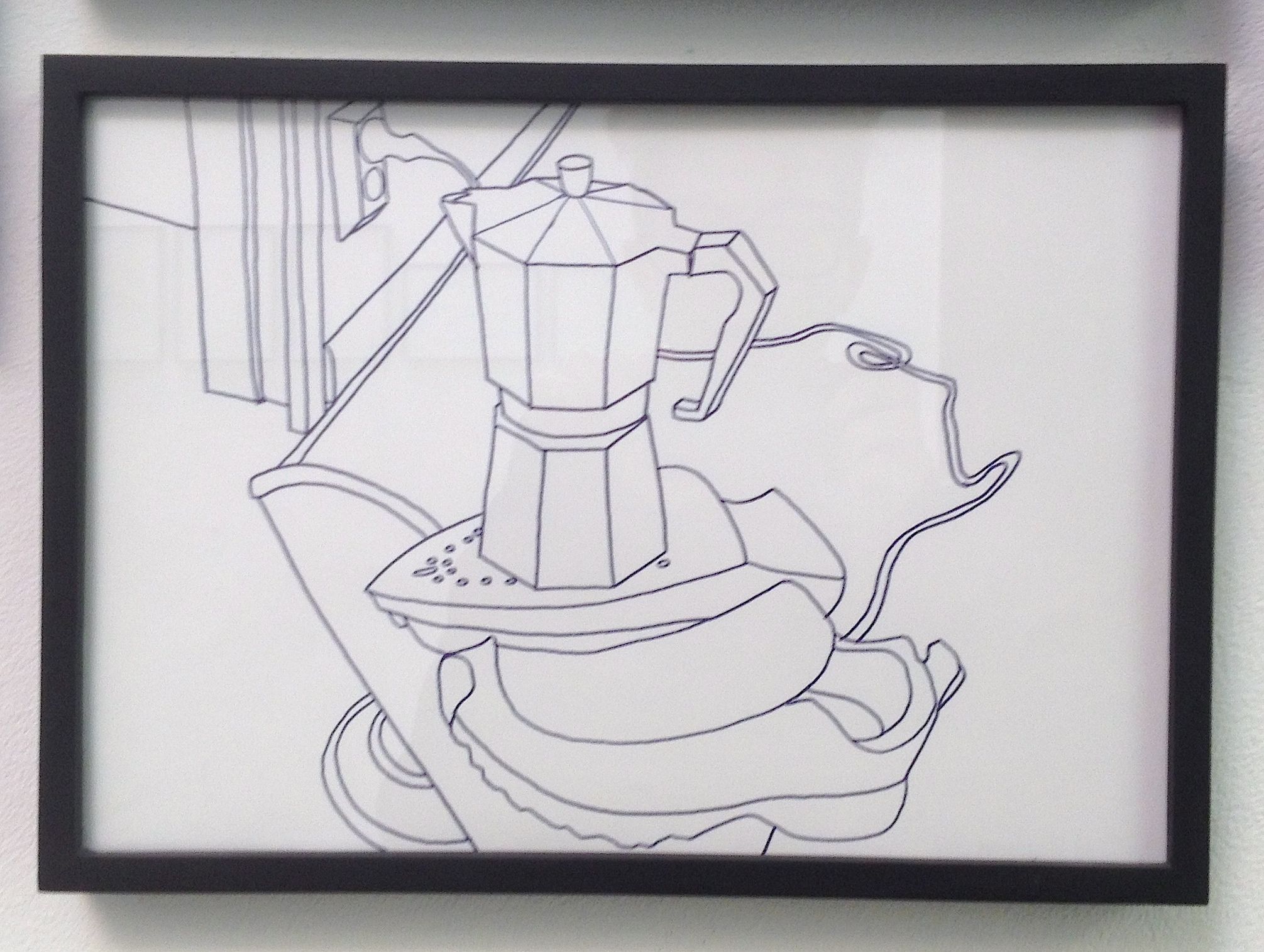 Many drawings appear to be traced from photographs (and some are familiar from the internet), while others may be imagined. With their delicate but confident blue lines, they all look a bit like scientific diagrams or instruction manuals. We fill in the blank white spaces with our minds, with the appropriate colors, dirt and noise, and we also fill in the backstory about what must have happened in the lead-up to the modification in each piece. The sheer number of drawings creates a viewing experience that’s a bit like internet browsing, celebratory of anonymous creativity.

All hovering between useful and useless, the drawing’s subjects are endearing — they are things we see around Egypt every day as people patch things up, recycle and defy all health and safety standards, perhaps due to poverty, but also due to a specific relationship with objects, a sort of cheerful lack of materialism, a fluid and accepting rather than a perfectionist, controlling conception of the physical world. In contrast to the minimalism of the drawings, the people behind these alterations are not worrying about clean lines. Elegance is not an aim but sometimes a happy byproduct of such processes. Objects get afterlives, and their manufacturers are cut out of the loop. 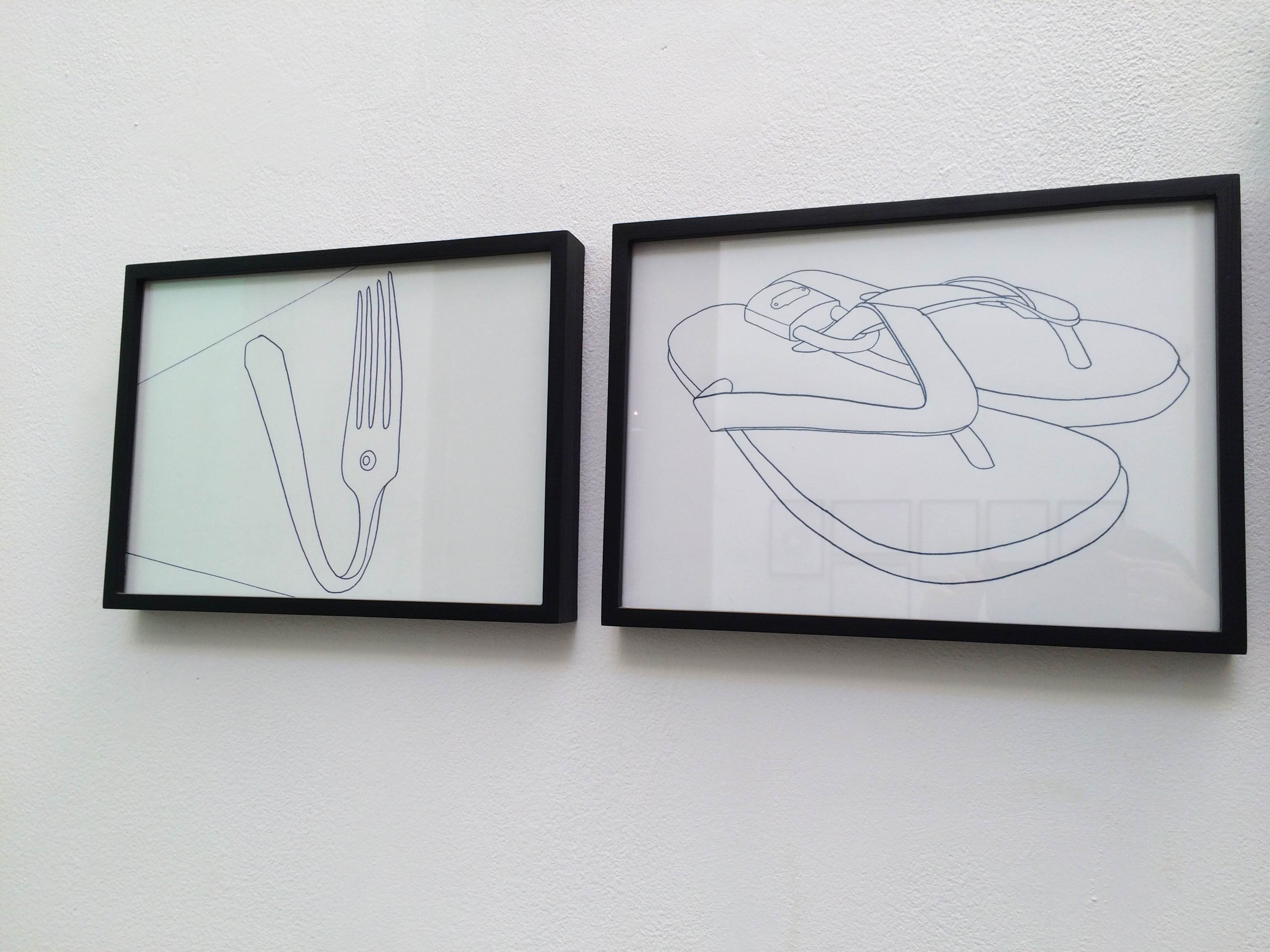 Through the five sculptures that are also in the show, this joyful DIY approach is transformed into rarefied monuments. They are completely white, large-scale remakings of the subjects of five of the drawings. You wouldn’t necessarily guess that they are built out of cardboard and paint: Like the drawings they are very carefully made, their blank surfaces as smooth as handmade cardboard-and-paint structures can be and their forms precise. Their shiny, worn layers of white paint match the thick white, sterile paint that’s on Medrar’s walls and indeed the walls of most gallery spaces. Now that the modified found objects are art, these little surface bumps and brush marks are the only traces of the friendly chaotic world they come from.

Two sculptures take up rooms of their own. One of these consists of two oversized pipes, floor to ceiling, which each have a faucet handle sticking out of them but no faucet, and the handles are so close together anyway that if they were real you wouldn’t have room to turn them. The top of the sculpture seems to squash an ornate plaster light fixture on the ceiling. 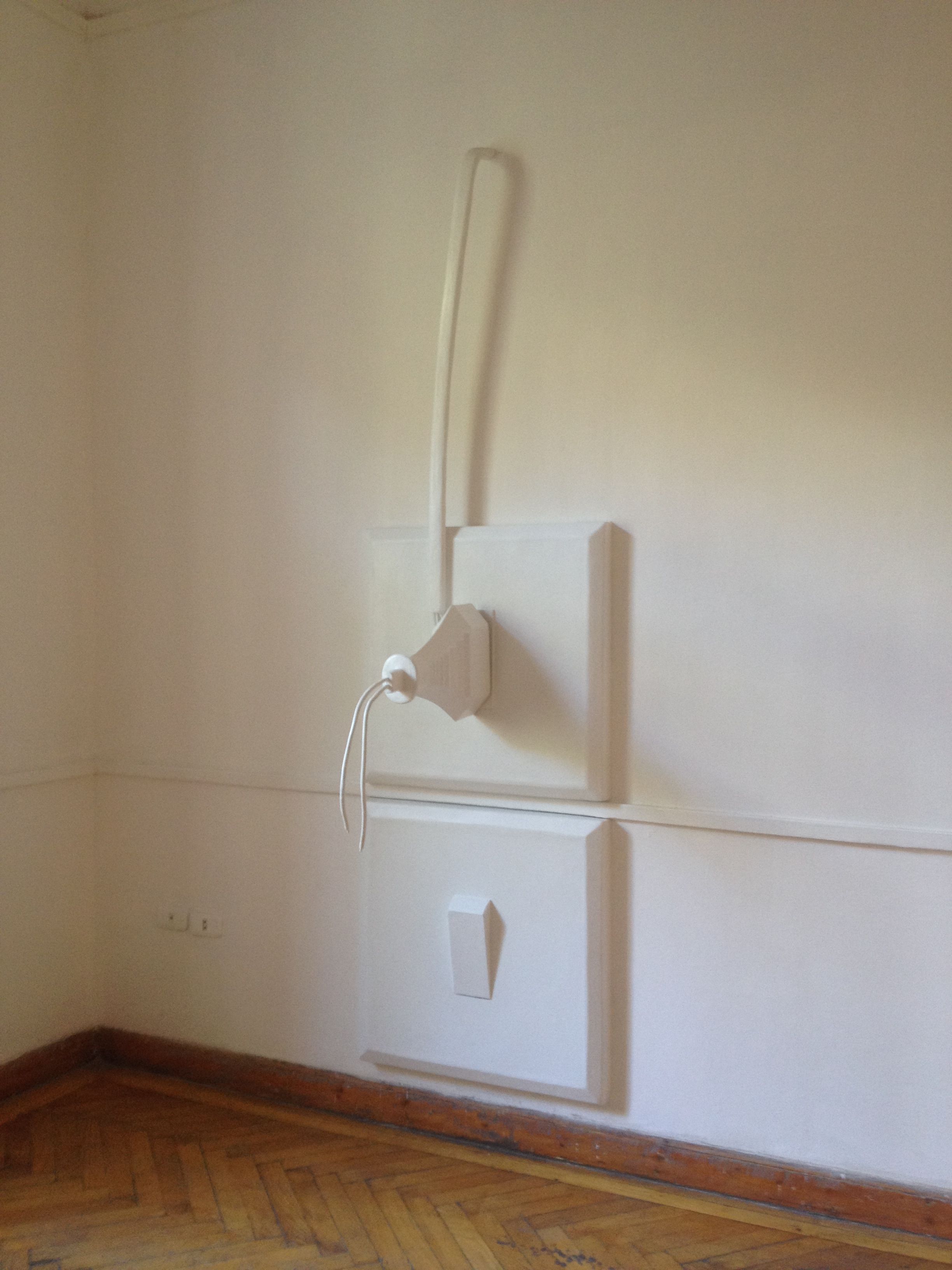 Elsewhere there are two sides of a dish taped together on a white plinth and huge hybrid headphones set in a corner. There’s also a massive amputated plug squashing a wire going directly into a plug socket that’s installed directly above a light switch. The blown-up scale of this last ensemble is satisfyingly disorienting because plug sockets and light switches tend to be white like the sculpture, and in fact there’s a real socket nearby, looking tiny.

The show’s nicely written press release, by artist Mohamed Abdelkarim, talks of a proposal for a provisionary design movement, and says that Badry’s objects “are not there to play a role in a socially engaged practice; rather they operate as a pair of spectacles which he uses to frame and focus on social and political issues dealing with several phenomena — questioning the ability of the global system and corporatization, objects and instruments of daily life to become a paradigm of normalization.”

Indeed, Badry’s works don’t make grand claims but they are more full of weight and allusions than might initially appear. They seem to wonder at what it means to display artworks in the environment of Cairo, and at the relationship between precious art objects and flawless manufactured things before they are co-opted into the dirt of the world. The show’s severe whiteness is contradicted by the feeling you get as you start deciphering the drawings and thinking about the world that produced them.

Ahmed Badry’s The Provisionary That Lasts has been extended, and will show at Medrar until January 29.

AD
You Might Have Missed
Carbon Colonies & A Green New Deal
What we talk about when we talk about trees
Mugamma revisited: Reimagining the building and the square
Where do old lesbians go to die?
AD
Jenifer Evans  @jniferrl
40 articles on Mada

Topics
Related
Basim Magdy
Obsession with time: Basim Magdy’s show at Gypsum
Ismail Fayed | In Measuring the Last Breaths of Time on a Fading Scale, Basim Magdy seems fascinated by tracing the
conversations about the arts
The Youth Salon: Bold, ambitious, too big
Taha Belal | The yearly Youth Salon, showing in and around the Palace of Arts in Cairo’s Opera
exhibition reviews
Third Eye offers insights into young artists’ use of images
Ismail Fayed | Third Eye is welcome in the context of increasing polarization between an atrophying state-controlled
American University in Cairo
Very real imagined spaces of Rana ElNemr
Sama Waly | Rana ElNemr is known for her photographs of abnormalities of urban Egypt, detached from their surrounding