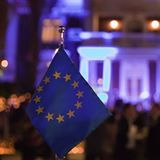 The European Union will not send a full mission to monitor Egypt’s parliamentary elections in March, the bloc’s foreign policy chief Federica Mogherini announced on Wednesday — a decision that was followed by a harsh statement rebuking Egypt for ongoing human rights violations.

The EU will only deploy “a smaller expert mission” to observe the polls, electoral campaigns and the general political environment, Mogherini said.

Shortly after Mogherini’s announcement, the EU Parliament issued a statement condemning worsening human rights violations in Egypt, emphasizing in particular the Protest Law and NGO bill that the EU contends narrowly restrict the rights of peaceful assembly, association and protest.

The statement also pointed to the Court of Cassation’s recent ruling granting a retrial for three Al Jazeera journalists incarcerated on terrorism-related charges. The first trial was rife with “procedural failings,” the EU claimed, calling for the journalists’ immediate and unconditional release.

Furthermore, the mass death sentences meted out against hundreds of purported Muslim Brotherhood supporters — as well as the incarceration of several hundred more — over the past year casts “serious doubts on the independence of the judicial system and on its ability to ensure accountability; whereas, in particular, these [rulings] resulting in the death penalty risk undermining the prospects for long-term stability in Egypt,” the statement continued.

The state’s position on LGBT rights was another serious concern for the EU, particularly given the recent spike in criminal prosecutions of Egyptians based on their sexual identity.

The EU “urges the Egyptian authorities to stop criminalizing LGBT people for expressing their sexual orientation and right of assembly on the basis of the Debauchery Law, and urges the Egyptian government to adopt national strategies for combating violence against women and LGBT people and eliminating all forms of discrimination, ensuring the effective consultation and involvement of women’s and LGBT rights groups and other civil society organizations throughout the process,” the statement said.

Egypt’s Ministry of Foreign Affairs responded with a statement on Thursday night condemning both the EU’s decision on monitoring the elections and the EU Parliament’s criticisms, dismissing both statements as a reflection of Europe’s lack of understanding of the political conditions in Egypt.

Decrying the statement as riddled with “false claims, fallacies and wrong conclusions,” the Foreign Ministry also accused the EU of not siding with the will of the Egyptian people.

The ministry slammed the statement for addressing “issues in a manner that does not suit Egypt’s cultural, religious and social specificity, which further angers the Egyptian public due to the EU’s insistence on imposing values that are far from the values of Egyptian society.”

The ministry was specifically referring to Europe’s demands for LGBT rights, putting an end to capital punishment and “allowing the defamation of religion under the pretext of freedom of expression.”

In October, the US-based Carter Center declared it would close its Cairo office and would not deploy an observations mission for the next parliamentary elections.

“The current environment in Egypt is not conducive to genuine democratic elections and civic participation,” former US President Jimmy Carter said at the time. “I hope that Egyptian authorities will reverse recent steps that limit the rights of association and assembly and restrict the operations of Egyptian civil society groups.”