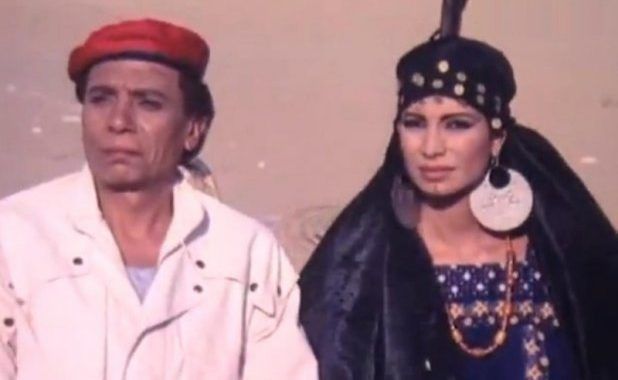 Shams al-Zanati (1991) has a unique history, attracting the drooling eyes of millions of Egyptians searching for their true identity and yearning for archetypal heroes who decorate their actions with courage and pride, so they can find the sole meaning of their lives through imitating and cheering for them. I’m one of those millions.

It’s an adaptation of a 1960 American western, John Sturges’ The Magnificent Seven, which in turn was adapted — as most of the good westerns are — from a Japanese film: Seven Samurai (1954) directed by Akira Kurosawa and starring the epic Tishoro Mifune.

Shams al-Zanati was an experiment in doing an Egyptian western, and in my opinion its makers did a better job than the Americans in adapting Kurosawa’s “story,” as not many can follow the master’s directorial skills.

As we’re discussing an adapted film we may ask ourselves a few questions. Is it okay to adapt a film, or is it just plain stealing? Do you have to compare the adapted film to the original in order to review it? And how do you adapt a film and not end up with a complete rip off no one will take seriously?

First of all, creation involves memory. So everything we create is directly or indirectly adapted. Therefore it’s totally fine to adapt a film to make your own. Secondly, it’s not necessary to compare technical aspects of the two films — it’s more like putting two paintings next to each other, giving them a good look, then asking yourself: Was the student true to his master, or in this case, after the film’s third adaptation, is the heart still there? (And the answer is that it’s alive and kicking and even better than the American version). Third, you adapt a film by taking an idea or “spark” and building a script around it that’s true to the place and people you choose to tell this story about.

The idea is that seven samurai are out to rescue a poor village from outsiders and we watch them sacrifice their lives for it. Directed by Samir Seif and written by Magdy Hedaya and Ahmed Fawzy, Shams al-Zanati starts by establishing the where and when of the story. Westerns mean wild deserts and vast spaces, and so Egypt’s western desert has been chosen. Footage of WWII explains why there were soldiers in this part of Egypt, what kind of soldiers they were and how they turned to villains. This keeps us informed about the characters’ origins, and throws us into the heart of occupied Cairo as Bedouin character Sheikh Etman goes to find some weapons to try and deter these villains.

The authenticity of the locations, customs and atmosphere of occupied Cairo is immersive. The main character, Shams al-Zanati (Adel Imam) is set up perfectly through a telling of his courageous deeds just before we meet him, which builds him up in our imagination as a good guy who kills English soldiers and resists the occupation, a man who fights for the poor and weak. Just what the Bedouins need.

The movie’s great acting and lightheartedness is established in tandem with the relationship between Shams and Bedouin widow Hanna (Sawsan Badr). Their continuous fighting gives us something to sincerely laugh about instead of always worrying about the villains.

What makes Shams a great archetype for an Egyptian hero? He’s strong, funny, confident, streetwise and a hopeless romantic, this latter quality being the truest part of this version, and not in the American or Japanese ones: He risks his life and the lives of his men to win the heart and respect of the woman he loves. Now that’s about as Egyptian as you can get.

Sequences shot among crowds in old Cairo get us down and dirty in these streets: The vast crowds give us the feeling that our story is just one among many. Seif partially fills these shots with people or alley walls to frame his characters, giving us the feeling of the tightness of urban space. This contrasts with his shots out in the desert, always filled with vast empty spaces of sand or night sky.

As we follow Shams in the Cairo slums to find his samurai warriors, we are introduced to the characters: Each is apparently knee deep in mud and desperately seeking resurrection. They all quickly prove to be of no less weight or importance than Shams himself. This is how this film exceeds its American inspiration, in which the characters were much less weighty. In the Japanese and Egyptian versions each character has a unique factor and story, creating seven character arcs of equal appeal.

The epic scene when we meet our heroes all together for the first time starts with stylized long shots as the camera follows each as he makes his way to the meeting point in a dump. We learn about their differences and past relationships, and it’s a great introduction to what comes ahead.

Depth is created through subplots as we get to know our characters better, like a love relationship, a traitor whom we suspect is supporting the villains, orphaned Salama’s relationship with the village’s kids (adapted from the American version), another character’s drinking problem and inability to pray. Each character has his own story he’s supposed to finish. We sympathize with all of them.

The outcast samurai is true to the Kurosawa version and played amazingly by Abdallah Mahmoud, who’s a great all-round actor in a pretty demanding role. The film never leaves you in the dark about the true character of any of its characters, so you know who’s in it for the money and who’s not right from the start.

Also, the fact that some of the characters have a unique weapon of choice is completely awesome.

What makes the story realistic is that it takes a bunch of men from the heart of Cairo, with all their flaws, fears and traits, into the heart of the desert and leaves them to interact with their environment to make their own future. The witty one, Said Aranes, quickly finds out the truth about the treasure they’ve been promised.

The director uses the camera expertly to connect characters and events and give or sometimes hint at the information we need. The use of long shots results in some very dynamic footage.

In an monumental plot twist, conflict between courage and greed puts our heroes in the spotlight when the humorous unmerciful villain Borai (a fantastic Mahmoud Hemida) gives each the chance to decide once and for all if he’s what the people think he is. They’re thrown into the abyss — as every hero must be — in order to reemerge and prove themselves if they can.

The last battle is great because we follow our seven heroes as each reclaims his pride and uses his weapon of choice to make his comeback. No one is left out. The convincing acting and background of the characters make the scenes in which each character’s arc reaches its climax — never too soon — heartbreaking. Both the audience and the characters finally have closure for every story.

The fact is that if I see two very similar films, one foreign the other Egyptian with authentic Egyptian characters, I’ll always be in favor of the Egyptian one and I’ll like it better. There’s something about our land that’s a very fertile soil for heroism and bravery. We love the likes of Shams and their stories because we yearn for heroes.

Dynamic directing, a bombastic musical score, great acting and a very clever adaptation of a story into the heart of Egypt is what makes this film a gem and a wonderful tribute to Kurosawa.

Correction: This article initially only credited Ahmed Fawzy as writer, accidentally omitting Magdy Hedaya. It was fixed on January 10, 2015.

AD
You Might Have Missed
What we talk about when we talk about trees
Carbon Colonies & A Green New Deal
Where do old lesbians go to die?
Mugamma revisited: Reimagining the building and the square
AD
Hessen Hossam
12 articles on Mada